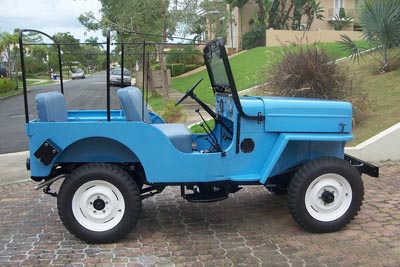 My name is Hector Ayala, from Puerto Rico. I would like to share these pictures of the restoration of my father's 1964 Jeep Willys. He was a farmer in Aibonito, a town in the center of the island. Aibonito's climate is cool because it is the highest elevation in Puerto Rico, and the town is also known for its annual Flower Festival, held in July.

After much effort and sacrifice my father bought this Jeep in 1964 and used it for 30 years to work on his farm (180K JPEG). 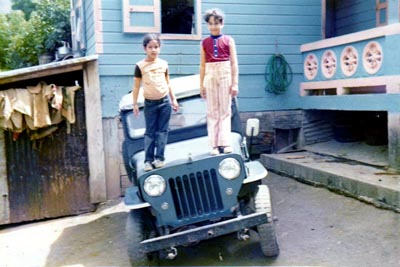 Pictured here in 1972 are the nieces who came from New York on vacation. By then, my dad had repainted the Jeep in a darker color. (For the restoration I researched the original color. It proved to be Sierra Blue, which matched perfectly with parts from under the body. According to my recollection he painted it about three times.)

My father died in 1993 and left the Jeep at the house where my mother still lived. In early 2000, the Jeep had several mechanical problems and was not used again. In December 2006 we talked to my mother about my interest to restore the Jeep, of which I had many fond memories, of my father and of learning to drive.

The restoration began in mid-January 2007 and was completed in January 2008 when the canvas top arrived. Some restorations take many years to complete, but I consider myself a diligent person and when I start something I'm anxious to finish it quickly. From what I recall, I would get home from work around 5:00 PM and work on it until 11:00 PM or midnight. My wife would tell me, "That Jeep is going to be the death of you and you won't get to enjoy it."

In 2011 the Antique Automobile Club of America (AACA) came to Puerto Rico, and my father's Jeep, which had been used for many years to load bananas, tobacco, avocados, pigs, etc., received the award for first place Junior (70K JPEG) and was nominated for the National Awards. In 2015 it would compete for the AACA Senior Award.

The next photos show me washing it in Aibonito, and transporting it to my house in San Juan in January 2007.

I began to disassemble it alone, and my employee would take the parts to the workshop. It took me ten days to disassemble everything. The most critical processes took a couple of months: buying the parts, supervising the painting process, and overseeing the restoration of the engine and transmission, which was done in another workshop. The paint shop is an hour and fifteen minutes away from where I live, and I made many trips there to see how things were going.

The refurbished parts (170K JPEG) began to arrive in early May 2007 and the employee would go three to four times a week to the paint shop to pick up parts or to return some because I wasn't satisfied with how they looked. I started to assemble the Jeep as the parts arrived and the process was slow and careful (unlike the disassembly), taking me about 5 months to complete.The engine and transmission were rebuilt in another workshop and I finished assembling them at home with the parts painted by the paint shop. I did practically all the work myself, except for installing the engine, transmission and the body with its components.

I had some issues trying to find some of the original parts, but I finally got everything I needed. Therefore, the restoration is 99.99% original.

Getting the original canvas top was difficult since they only sell plastic ones locally, so I had to send measurements and pictures to the U.S. manufacturer. The canvas top arrived ten weeks later, on January 18, 2008, in the wrong color (Navy Blue). It was lovely, but not what I wanted because it was not the original color for the Jeep. 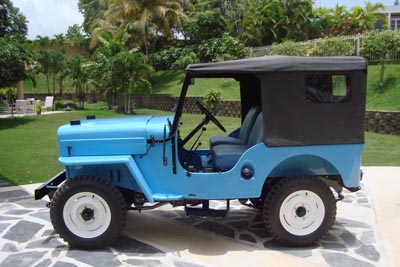 I explained to the supplier that the color was incorrect and that I wanted the Jeep ready for an important auto show, which was in February 2008. They sent the right one within eight days.

I recently finished the process of making the doors, because they were a requirement for the Senior Award category in the March 2015 AACA competition (180K JPEG). 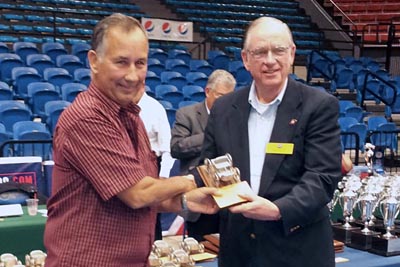 The AACA Competition was excellent and well attended; over 250 cars competed across different categories. Our Jeep faired excellently and won Senior. Note that the award badge (100K JPEG) is the same from 2011, they just added the "Senior." This indicates that the car began competing in 2011 and it has to keep moving up in category every time we compete. Next time, we'll compete for the "Preservation" category; this would be in four years, since the competition in the island only takes place every four years. 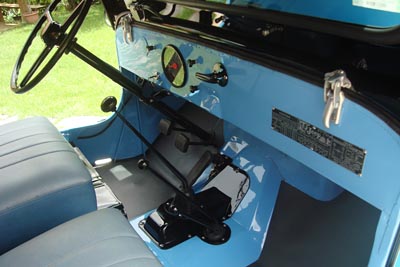 The important thing is that even after all the hard work, I enjoyed the process. See Item 17 in Restauracion Jeep 1964 (170K JPEG): "Cases of Coors Light: ????" There were many!

I have a blog called Hobby Autos Restoration with more pictures. -- Hector Ayala

Thanks to Hector for the photos and story. He also has a 1953 CJ-3B, coming soon in Jeep CJ-3B Owners and Photos. -- Derek Redmond