...and what they were doing on Easter Island

Federico Cavedo has tracked down some interesting photos of Jeeps belonging to the Chilean Marine Corps, and in the course of researching their background, I also discovered the story behind a puzzling picture taken on Easter Island, which had turned up in 2009 when the LIFE magazine photo archive was unveiled. -- Derek Redmond 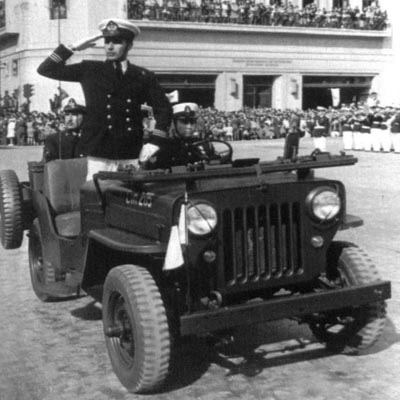 In 1964, the Cuerpo de Infantería de Marina (CIM) was completely reorganized and refocused from being primarily the artillery battalion of the Chilean Navy, to become a modern amphibious expeditionary force. (1) Obviously a force of that nature would require Jeeps.

Although the list of Surviving CJ-3B Jeeps on CJ3B.info includes only a single entry in Chile, both the Chilean Army and the Marines reportedly received Kaiser M606 (militarized CJ-3B) Jeeps from the United States in the 1960s. (2)

In this undated photo (probably late-1960s), an M606 of the CIM carries a Marine Commander in a parade in Plaza de Armas ("Square of Arms") in Santiago. (3)

(Saluting from a moving vehicle without holding on to a grab bar or windshield takes some guts, but seems to have been standard procedure for Chilean Marines, judging from another undated photo of a CIM M606, 170K JPEG). 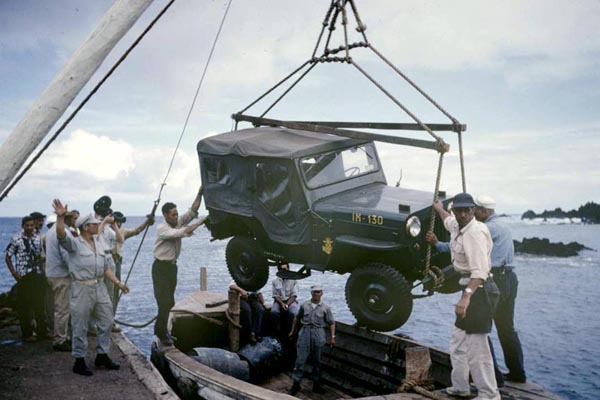 Carl Mydans took this shot, during an assignment for LIFE magazine in 1965. It shows what is probably one of CIM's first Jeeps. The prefix on the hood number is simply "IM" (Infantería de Marina) rather than the "CIM" seen on later examples.

The Jeep is being unloaded at dockside on Easter Island, 2,400 miles west of the coast of Chile and 2,500 miles east of Tahiti -- one of the most remote populated areas on Earth. (See a South Pacific map, 100K JPEG.) 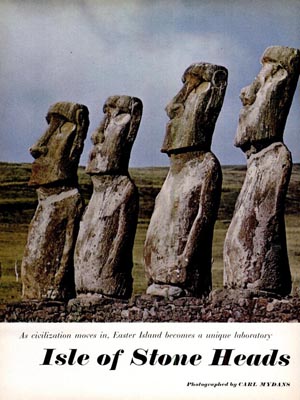 Easter Island, also known as Rapa Nui, is about 14 miles long by 7 miles wide, and is famous for its mysterious human-like statues ("moai"), 12 to 30 feet in height.

It was probably first settled about 300 A.D., and resources on the island became scarce by about the year 1000 as the palm forests were destroyed. The society began to decline into civil war, and the mysterious Birdman Cult developed by about 1500. The Dutch "discovered" and named the island on Easter 1722, after which the population decreased to about 100 due to exposure to slavery and disease. Following annexation by Chile in 1888 it has gradually increased to over 3,000. (4)

Why was the Jeep being brought ashore on the tiny island, from this little wooden boat, in 1965? Another mystery, from a place known for mysteries.

I found the answer in Carl Mydans' article Isle of Stone Heads (LIFE magazine, 4 February 1966), in which he tells the story of the Easter Island "rebellion" of 1965. I also found more of his photos in the LIFE photo archive, most of which were not included with the original article and are published here on CJ3B.info for the first time. 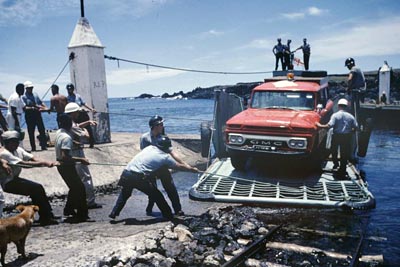 There is a Canadian as well as a Chilean connection to the story. Carl Mydans was accompanying the 38-member Canadian-led "Medical Expedition to Easter Island" (METEI) aboard the Royal Canadian Navy supply ship HMCS Cape Scott.

As seen here, the ship had a landing craft, which delivered METEI's red GMC Suburban right to the boat launch ramp. 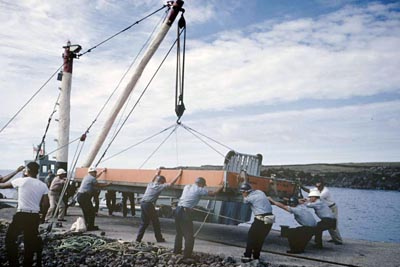 And the dockside crane was used by the Canadian sailors to unload sections of several modular buildings (130K JPEG) to serve as METEI clinics and labs.

But just as the expedition arrived, there was also political excitement developing on Easter Island. Mydans devotes much of the text of his article to the political upheaval, and Canadian Press reporter Fred Joyce also filed a story published in newspapers across Canada: "Canadians in Midst Of Easter Rebellion." (5)

The Easter Island independence movement led by Alfonso Rapu, a popular 22-year-old schoolteacher who had been educated on the mainland, was complaining of lack of self-government, dictatorial military administration of the island, and unfair elections. When Rapu was accused of removing parts from a bulldozer to prevent it from being taken off the island, the military governor attempted to arrest him to be sent back to Chile on the Cape Scott.

Alfonso Rapu escaped into hiding, in a cave in the hills, whereupon the Chilean government announced they were sending Marines to secure the island. 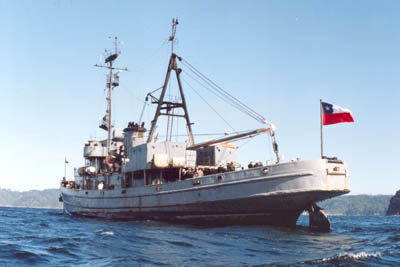 Rapu was still hiding when the Chilean gunboat Yelcho appeared on 5 January 1965.

The 205-foot Yelcho (120K JPEG) had been built in 1942 for the U.S. Navy as the fleet tug USS Tekesta, and earned four battle stars in the Pacific. (6) She was sold in 1960 to the Chilean Navy, who renamed her in honor of their earlier Yelcho which had famously rescued the 1916 British Trans-Antarctic Expedition from Elephant Island. (7) (See a South Pacific map, 100K JPEG.)

There are no pictures by Carl Mydans in the LIFE archive showing the Yelcho; this photo is courtesy of retired Navy Captain Patricio Villalobos. (8) 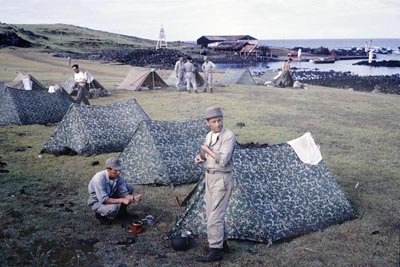 Forty marines came ashore, where they found themselves welcomed by women with songs and flowers. Commander Guillermo Rojas took over supreme authority on the island and began an inquiry into the situation, including reports that Rapu's group wanted to join Polynesia, 2,500 miles west.

Carl Mydans reported in LIFE that "units of marines rolled about the island in their newly landed jeeps, searching for the elusive revolutionary, Alfonso Rapu. The people watched with sly joy. "They'll never find him,' they told me.

(The docks where the vehicles were unloaded are visible in the background of this photo. Unfortunately there are no further pictures of the Jeeps among the transparencies scanned for the LIFE photographic archive.) 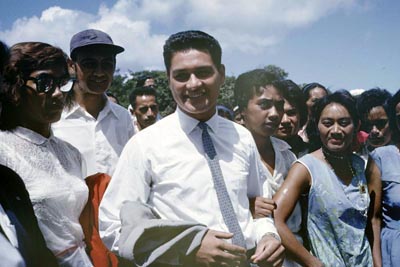 Mydans continues the story in LIFE: "Then one morning, Alfonso Rapu himself came marching down the main street of the village surrounded by hordes of women, all calling to him and looking admiringly at him, unable to resist touching him. For Alfonso is an Adonis. He walked directly to the house where the miitary court was in session....

"Then the military court began to interrogate Alfonso and the island grapevine reported that ugly things were being said about him." 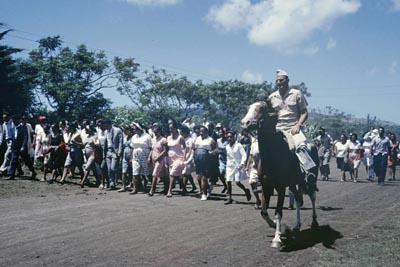 Reporter Fred Joyce summarizes the next incident: "A crowd of his followers -- mostly women -- heard him having words with Rojas in the officer's jeep and rushed on the pair, apparently under the impression Rapu was being arrested. The incident occurred near the METEI expedition's campsite, one of the few fenced spots on the island, and about a dozen women rushed Rapu inside. The marines fired rifles into the air. Some of the women, screaming, fell to the ground, claiming they had suffered heart attacks." 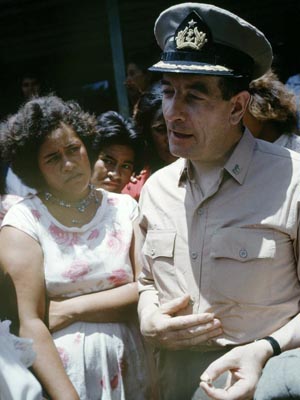 Commander Rojas sent his marines away and waited for the Islanders to cool off. Next day, he apologized to the METEI expedition for the disturbance, and announced there would be new elections. And for the first time, women would vote.

Alfonso Rapu received the most votes, and the results were accepted by the Chilean government because of fears that if they did not respect the will of the Rapa Nui voters, "international attention might be drawn to Easter Island's embarrassing neo-colonial situation." (9)

Carl Mydanis wraps up the story: "The Yelcho loaded all its marines again, and its weapons and its jeeps, and turned its head out to sea. The bulldozer, its running parts restored, stayed where it was. And the islanders stood above the lacy fringe of bursting surf, waving sadly. Easter Islanders are always sad to see any ship sail away.

"With the revolution over, the METEI doctors and scientists settled down to their work again without distraction."

The year 1965 continued to be a big one for the Easter Islanders because an airstrip was finally constructed, decreasing their reliance on visits from the Chilean Navy. More recent developments are the 1986 extension of the runway to allow it to be used as an emergency landing strip for the Space Shuttle, and the island's 1996 designation as a UNESCO World Heritage Site.

But the independence movement is still what The New York Times calls a "Slow-Burning Challenge to Chile on Easter Island." (10)

Other photos of the Cuerpo de Infantería de Marina (CIM) found by Federico Cavedo appear to also have intriguing stories behind them. 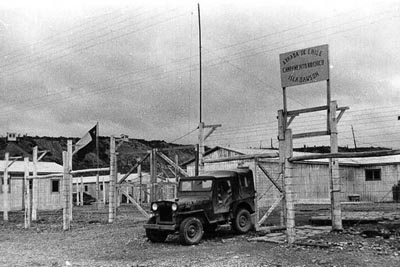 This photo (3) which shows an M606 passing through the gate of an Armada de Chile (Chilean Navy) installation, is just big enough to also read the rest of the sign. It identifies the barbed wire as being the Rio Chico concentration camp on Isla Dawson (Dawson Island), part of the Tierra del Fuego archipelago. (See a South Pacific map, 100K JPEG.)

The island was used to house hundreds of political prisoners under the control of the Chilean Navy, following the 1973 military coup d'état. (11) The coup, supported by the U.S. under Richard Nixon, overthrew the democratic government of Salvador Allende and installed the Pinochet dictatorship which imprisoned and killed thousands of political opponents until 1988. (12) 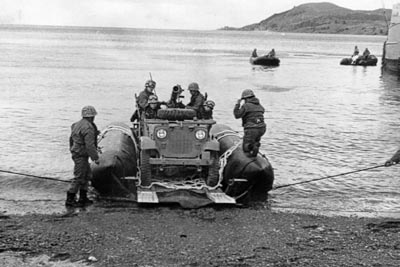 The government reported they had moved all prisoners off Dawson Island in 1974. But this photo (2) holds another surprise -- it reportedly shows the CIM in a 1980 amphibious exercise at Dawson, with a recoilless rifle mounted on what is clearly a Mahindra Jeep manufactured in India! Was that because U.S. aid to the military regime was beginning to dry up amid international criticism? (13) 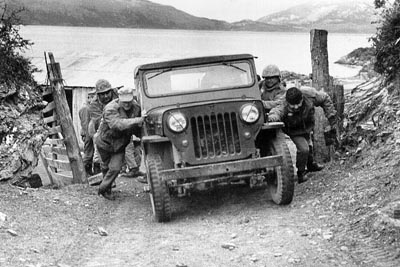 This 1972 picture shows a Willys M606. The only puzzles here are why the Marines are pushing the Jeep, and what they are doing at this large inland lake, reportedly in the Coipa mining area in northern Chile. (14)

Maybe one day we'll find out the full stories behind these photos, but they probably won't be quite as entertaining as the Easter Island Rebellion of 1965.

Thanks to Federico Cavedo, to the photographers, and to the LIFE photographic archive at TIME.com.
The CIM coat of arms is used under Creative Commons license. -- Derek Redmond

Return to CJ-3Bs in History or to M606 Military Jeeps on CJ3B.info.