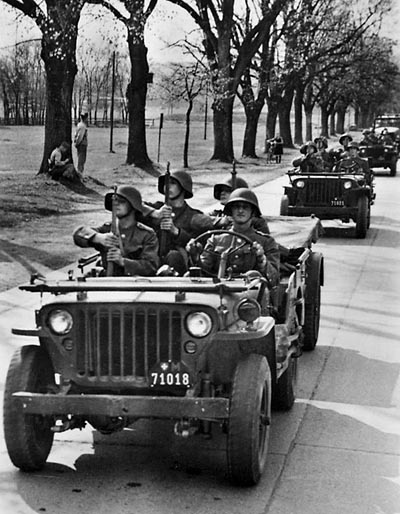 The first Jeeps of the Swiss Army were 1,565 American surplus jeeps (both Willys MBs and Ford GPWs) bought following World War II. About 30 of them were in unusable condition, according to archival research by Swiss Jeep historian Nik Oswald, but the purchase began a tradition which soon continued with an order for 400 CJ-2As (following three as test vehicles) from Willys in 1947.

Many of the Jeeps survived in civilian use after being retired by the military. Ulrich Tribelhorn of the Jeep Club of Central Switzerland says, "At the time when the army still used horses, young farmers who went in the military service could pay a part of the cost of a horse and could take it home after their service. When the army started to buy Jeeps they kept this tradition. This is the reason that quite a few of our members still have the Jeep they used in the military service."

This photo of a Willys MB and trailer on parade comes from an undated postcard. The Swiss Army trailers were built by Sutter Fahrzeugbau in Lungern, founded in 1929 and still in business as of 2020. See a side view (260K JPEG) of a 1979 Sutter trailer, also a front view (340K JPEG) and the builder's plate (250K JPEG) reading "Sutter Lungern." Photos courtesy Rick Roach. 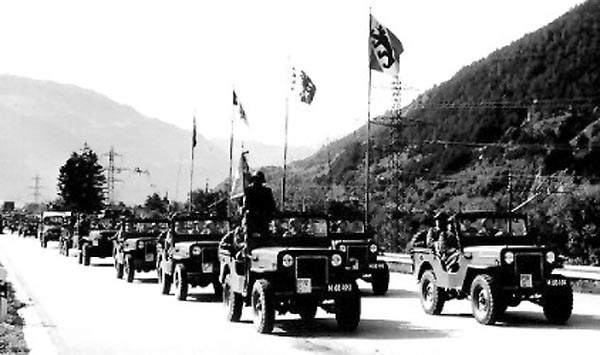 These CJ-3Bs in service are seen in a photo from the book Fahrzeuge der Schweizer Armee ("Vehicles of the Swiss Army") by Markus Hoffman. 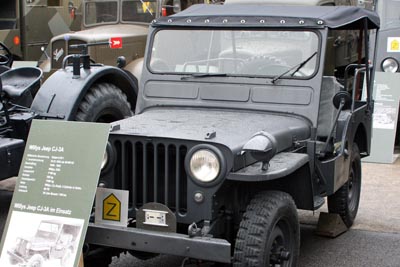 Many of the retired Jeeps have been restored by new owners across Europe, or are preserved in museums. This CJ-3A is one of several Jeeps in Museum Im Zeughaus, a volunteer-run collection of Swiss Army equipment located in Schaufhausen. Photo by Massimo Foti on Flickr. 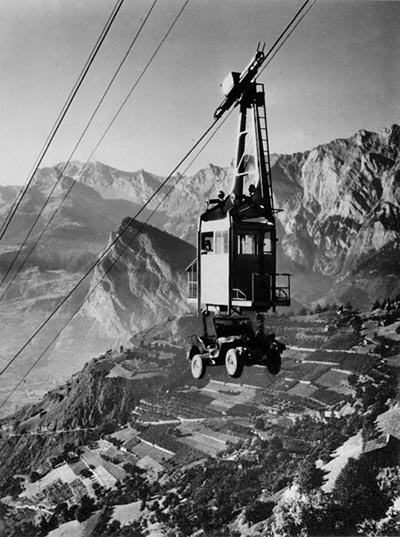 I don't know the source of this photo, reportedly from 1958 and probably from a postcard. The picture certainly says "Switzerland", and it looks like a military CJ-3A, with the same railing around the rear seen in the photo above.

The Jeeps purchased by the Army, as well as civilian Jeeps, were imported from Willys-Overland Export Corporation by Fratelli Ambrosoli ("Ambrosoli Brothers") in Zürich. Fratelli Ambrosoli was a family mechanical workshop business established in Locarno, Switzerland, which expanded into many other fields including importing vehicles, and moved its headquarters to Zurich in 1946. (Wikipedia) 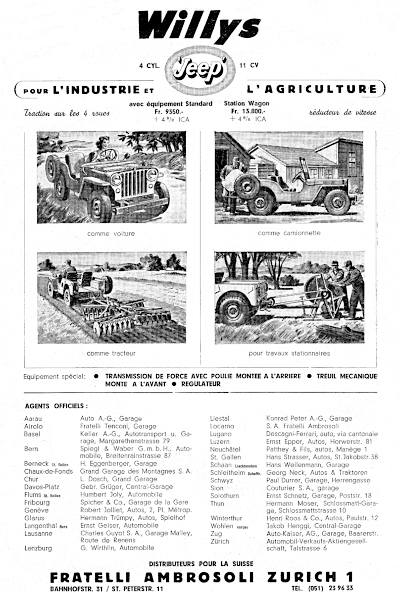 This early Fratelli Ambrosoli ad in French, promoting the "Willys Jeep for industry and agriculture" shows that they already had an extensive network of dealerships across Switzerland.

A May 1952 advertisement (400K JPEG) from Willys-Overland Export was headlined in German "With 4-wheel drive you will make it!" and showed the Ambrosoli name in smaller print.

Interestingly, the Ambrosolis were at the center of a minor controversy in the U.S. when LIFE magazine published a photo of a crated Jeep headed for Switzerland (70K JPEG) on 26 January 1953, as part of an article on American goods sold on the black market in Communist countries.

Hickman Price, president of Willys-Overland Export, replied in a letter to the editor (90K JPEG) on 16 February, "We take strong exception to this implication of hanky-panky behind the Iron Curtain on the part of a reputable American company. The jeep... was destined for the Swiss army. The consignee was our Swiss distributor, Fratelli Ambrosoli, Zurich." 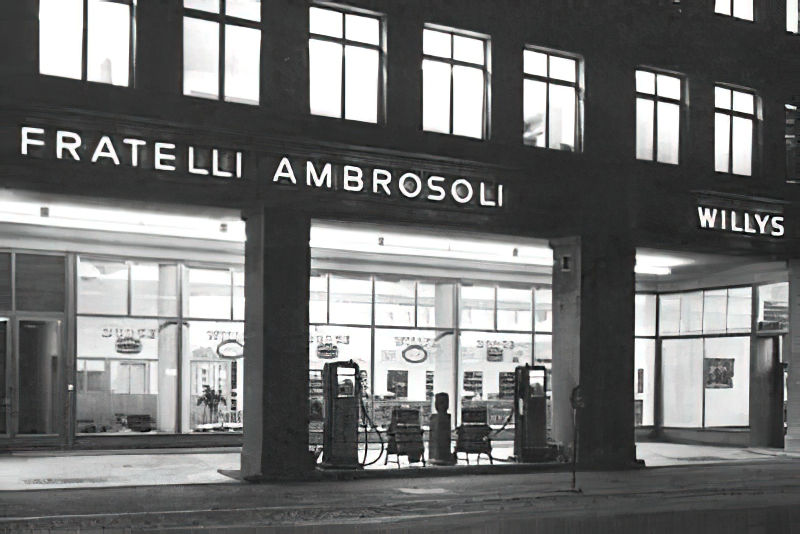 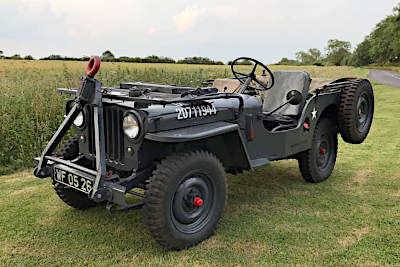 Fratelli Ambrosoli attached a plate with with lubrication instructions on this Swiss Air Force CJ-2A, directly below the serial number plate (80K JPEG).

The Jeep is now owned in the UK by Gav Culshaw, who says, "It was used by the Swiss Luftwaffe to tow Vampire jets around, and has a PTO which drives a grooved pulley which drove the jet engine starter, which was originally in the passenger side."

(Also rare is that this CJ-2A falls within the serial number range 176061 - 185769, originally built in early 1948 with the spare tire on the left side due to regulations in some U.S. states, possibly intended to protect pedestrians.) 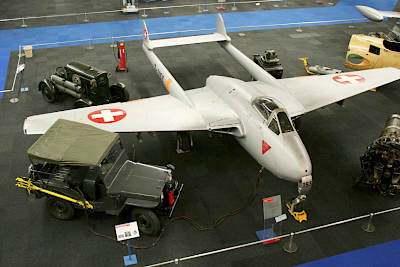 A similar CJ-2A complete with the jet engine starter and tow bar is on display at the Swiss Air Force Center museum near Zurich, plugged into a deHavilland Vampire. Photo courtesy of the blog Aces Flying High. 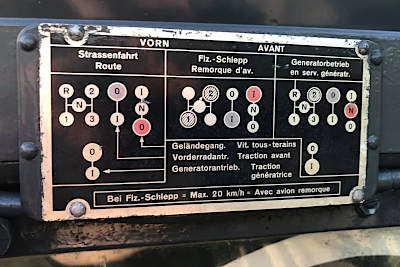 The CJ-2A aircraft tug also carries an unusual plate with instructions in German and French for proper operation of the transmission, transfer case and PTO levers when driving on pavement (left), towing aircraft (center), or running the generator for starting aircraft (right). Maximum speed 20 km/h when towing planes! 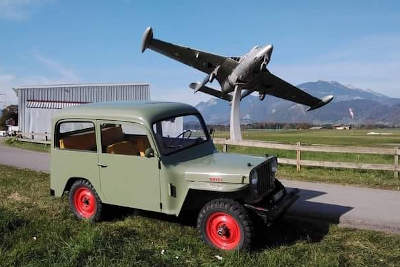 Another configuration delivered to the Air Force in very small numbers was this stretched hardtop CJ-3A, apparently intended for ferrying pilots to their aircraft (such as the deHavilland Vampire in the background.) This airfield 3A is owned by Christopher Vock who reports that twelve of these bodies were built by Worblaufen-Ramseir of Berne. 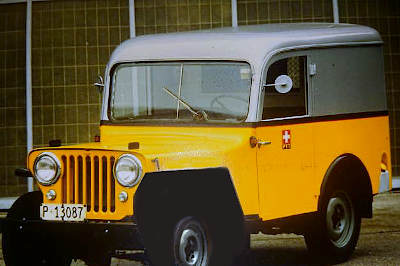 Fratelli Ambrosoli also imported and customized vehicles for Swiss Post. There may have been 400 Jeeps including this CJ-2A, of which possibly four are known to survive. 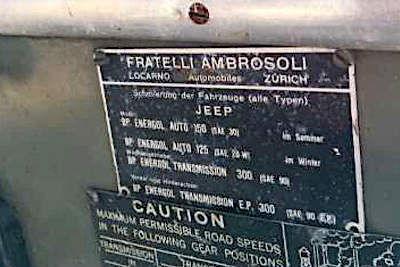 The Ambrosoli plate with lubrication instructions is on the dashboard of another former Swiss Post CJ-2A (110K JPEG) offered for sale online in 2020. 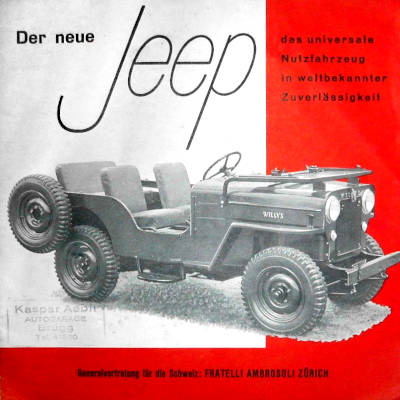 When the CJ-3B became available for import, Ambrosoli published their own version in German of a brochure from Willys-Overland Export, titled "The new Jeep: the universal Commercial Vehicle with world-famous Reliability" (originally titled The World's Standard Utility Vehicle.)

Ambrosoli Brothers had apparently been expanding their dealer network, since the brochure is stamped by a garage in Brugg which did not appear on the list of dealers in the earlier advertisement above. 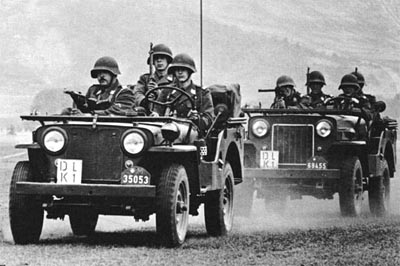 The Swiss Army was ready to order the new Jeep. An undated photo shows an Army CJ-2A and CJ-3B together during an exercise. Both Jeeps have the Willys chaff screen over the grille -- probably used to prevent buildup of snow on the radiator. Photo courtesy of Le QG 1/72e. 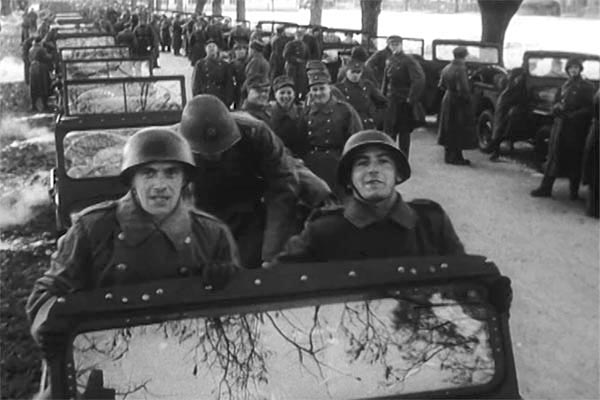 This photo has an exact date: 12 February 1955. It's taken from newsreel film of an overnight rally in Thun, with 150 three-person teams of military personnel in Jeeps covering a 160 km course, with tests along the way including orienteering and target shooting. Clearly the 150 Jeeps lined up for the start include both CJ-3Bs and earlier flatfenders. 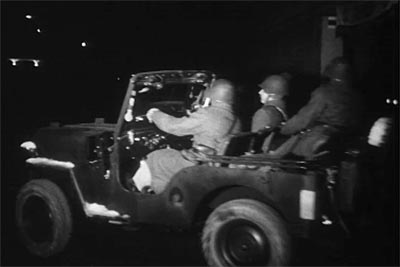 The two-minute newsreel film (30MB QuickTime video) shows the Jeeps driving across snowy terrain, and plotting their course by the light of flashlights and candles. At one stop, the driver studies the map while the two passengers throw grenades at a target. At another stop, the teams have to hike to a shooting range by compass in the dark. The winning team is three Army officers from Zurich. Video courtesy of the Swiss Federal Archives. 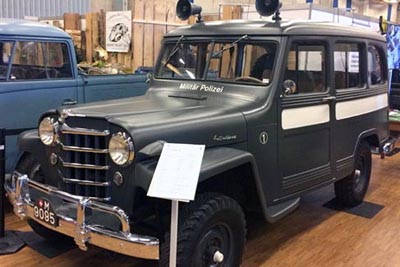 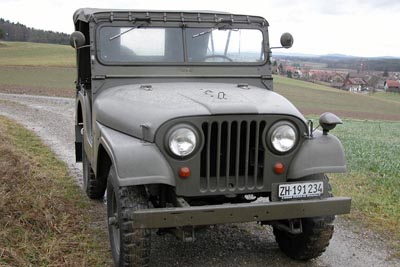 A large number of CJ-5s reportedly included some of the M606A2 variant. Like the M606 version of the CJ-3B, the M606A2 was a CJ-5 with heavy duty options and blackout lamps. In addition, the M606A3 version was equipped with an auxiliary 24V electrical system for radio communication.

Visible in this photo is a detail also seen on some CJ-3Bs -- the blackout light plugged into a receptacle beside the left headlight. 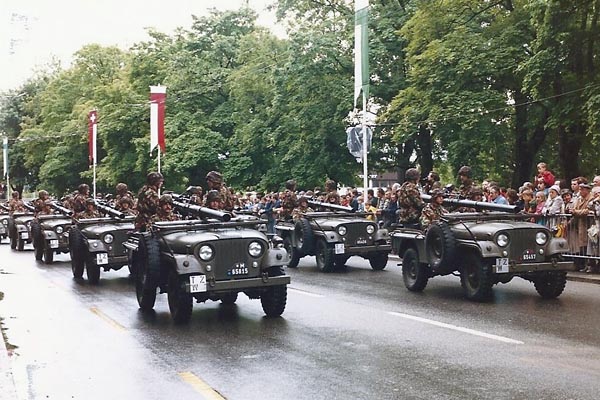 Switzerland was apparently approved to purchase the M38A1, and the Army ordered 821 which were used to mount 106mm recoilless rifles between 1958 and 1993.

Mechanized Division 1 is seen here in Lausanne on 20 June 1987. Surprisingly, the Jeeps do not have the M38A1C windshield kit with the gap for the rifle barrel. Photo by Fabienne Cornu, courtesy Alexandra Cornu. 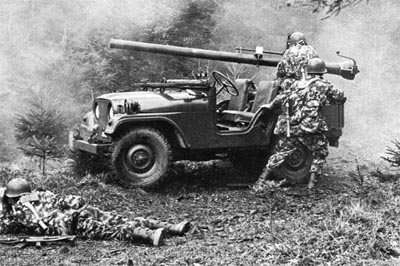 The Swiss military probably figured that the combination of the 106mm guns and the Alps would keep Switzerland pretty safe from a tank invasion. Photo courtesy Le QG 1/72e.

However, it was also revealed in 2018 that during the Cold War, in spite of Switzerland's neutrality, there was a secret Swiss unit known as P-26, trained in cooperation with NATO to harass potential invading Soviet forces inside the country. 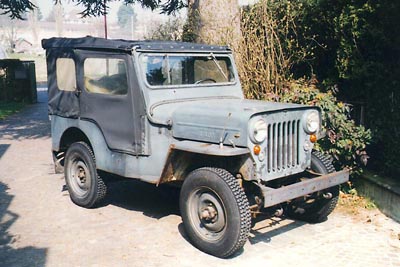 Most of the Swiss military Jeeps were painted olive drab; some were grey.

Eric Cerottini says, "During my obligatory military service I frequently drove a 1972 CJ-5, but when I discovered The CJ3B Page on the web in 1999, I decided to buy a CJ-3B type." He bought this 1956 CJ-3B in a private sale from the second owner in Emmental.

Rear view mirror supports are often attached to the windshield (30K JPEG) or to the front fenders as seen here. 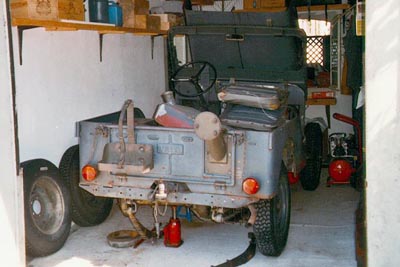 Eric mentions, "I found a jerrycan rack and a spare wheel support (20K JPEG) at the 1999 Swiss military vehicle sale. The holes that I found on the tailgate of my 3B are exactly corresponding to the bolts on the two pieces. The four 3B's sold this year in Thoune had the same pieces on their back." 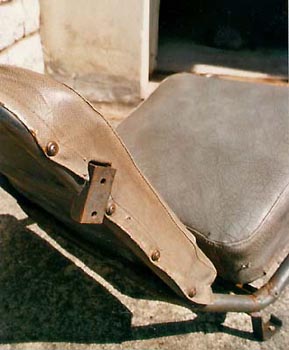 "I probably found another Swiss particularity: there is a special piece on the driver's seat that was used to hang a soldier's rifle between the two front seats."

See also a photo by Raymond Richard of the dashboard on his '54 and Heiko Link's photo of the Swiss Army data plate (70K JPEG) on his '61, which shows 1960, the year of manufacture. 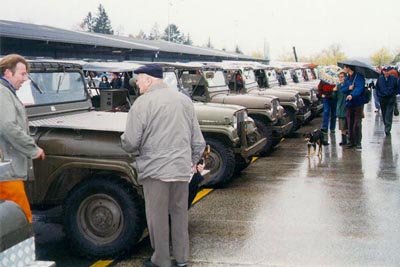 The sale of surplus Swiss Army vehicles is held annually in Thoune, Switzerland. Eric Cerottini saw 45 Jeeps at the 1998 sale, but reported that the prices were high. He returned and took these pictures at the next sale in Thoune on 21 April 1999. He reports that in 1999 "there were more than 700 vehicles and working machines to buy: trucks like GMC 1949, Saurer 2DM, Unimog S, Pinzgauer/Puch, Toyota Landcruiser, and Land Rover." 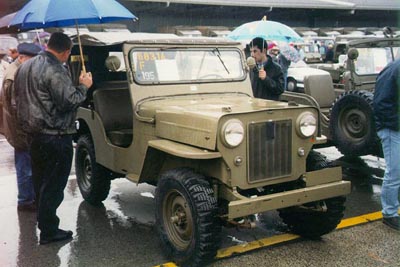 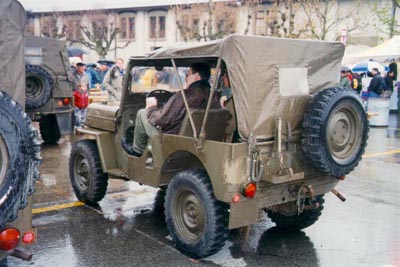 This rear view shows the jerrycan rack and spare tire mount, as well as the military-style folding top on this 1965 model. 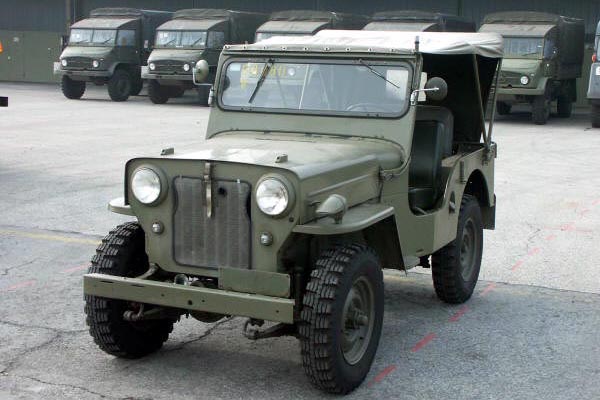 Philipp Burger gave us a heads-up that the three CJ-3Bs included in the 2006 Swiss Army surplus vehicle sale in April were likely the last ones.

As usual, the Jeeps had grille screens, military-style soft tops, and ventilating windshields with top-mounted wipers and a pair of rear-view mirrors. At least a couple had air horns behind the front bumper.

The one seen here had a front blackout light, although it was no longer connected through the hole beside the left headlight. 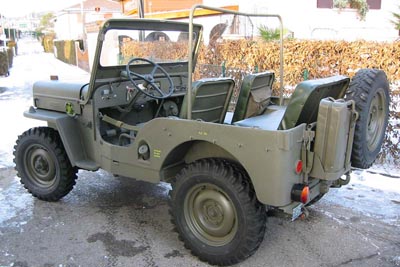 A Swiss CJ-3B featured in some detail on CJ3B.info, is Marc Daenzer's 1953 Swiss Army Jeep in Crissier, Switzerland, restored in 2003.

See also Piet Versleijen's restored '56 in the Netherlands, which he took on a 2002 CJ-3B Vacation in France, and Rob Baens' 1962 Military Jeep Restoration. 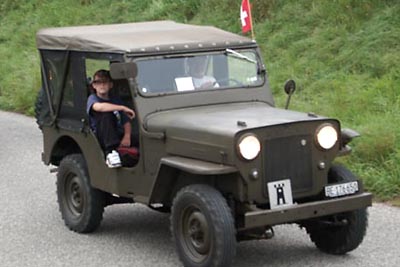 This restored example carries unit identification on the front. Like many of the Jeeps, this one has a chaff screen over the grille, and the photo (source unknown) also shows snap-in side curtains for the soft top.

Here are some sources for Jeep parts in Switzerland:


By the way, although the legendary Swiss Army Knife has been replaced for many people by the Leatherman and similar multi-tools, you might be interested to know that there is a Jeep Swiss Army Knife, which was apparently produced for Mopar in the 1990s by Victorinox in Switzerland, and appears occasionally on eBay.