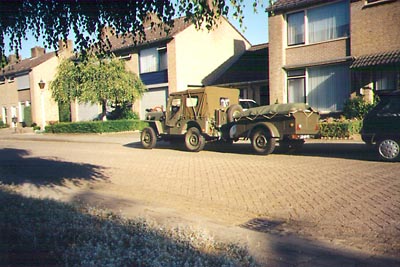 After completing the restoration of my former Swiss Army Jeep (see Restoring a 1956 Military CJ-3B on CJ3B.info), and obtaining a legal vehicle title early this year, it was time for some real driving around. Unfortunately almost all the events organized by my club were cancelled due to the hoof and mouth disease crisis in the Netherlands. Unnecessary activities and gatherings in the countryside and the forests were closed to prevent further outbreaks of the disease. So there was no real chance for a good test drive through the woods and the fields. What a pity.

So I had to take my chances on my goal for this year, without major testing: taking my wife Christa and my two daughters Mea (age 6) and Merith (age 4) on vacation to the deep south of France in the CJ-3B. A trip of about 1380 km each way. After a good final check on the Jeep and quickly repainting the trailer (a Polynorm ex-Dutch army trailer) it was time for packing. We planned to drive about 500 km a day so the trip should take about 2-1/2 days. We also planned the route carefully to avoid highways and big cities as much as possible. Off we go! 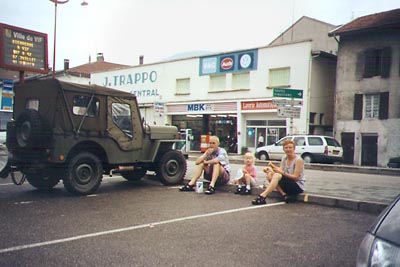 Leaving the Netherlands without any problems, I found out that driving at lower speeds than the rest of the traffic is very relaxing. With an average speed of about 75-80 km/h, the whole way ahead is free. Almost every car and truck passed us.

In Belgium just before entering the Ardennes, our first problem occurred. Driving behind an old truck I noticed a strange smell of burned diesel and hot oil. Believing that the old truck ahead of us needed some repair I didn't give it much more attention. Wrong! A few kilometers later the truck left the highway but the smell of hot oil was still there. Suddenly i noticed some black spots on our windscreen: oil! Pulling over and lifting the hood I discovered that the whole engine bay was covered with oil from the engine. Even the right fender and almost the whole right side of the jeep including the fender from the trailer where covered with oil. Checking the engine I found out that the oil hose from the pump to the filter housing had a loose end at the filter side. All the oil coming from the hose sprayed right into the fan. What a mess.

With some wire (never leave home without it) I made an emergency repair so that we could leave the highway. I needed some 3 litres of oil to fill up the engine again. Unfortunately I didn't take any photos of this event. But on an emergency trip off a highway I had some things on my mind other than taking pictures.

After leaving the highway I found a Mercedes truck repair centre. There we could use a high-pressure steam cleaner to clean our Jeep. The owner provided me with a hose clamp so that I could make a good repair. And all for free! Thanks! An hour later we were back on highway E25 and passing the Ardennes and Luxembourg without any problems. 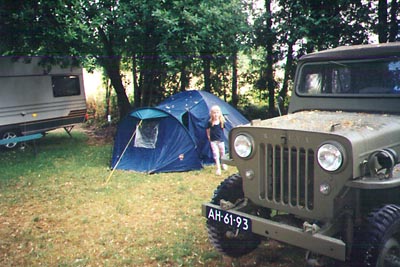 In the evening we reach our first campsite for the night, at Neufchâteau in France. At the campsite we get much attention from other people with all kinds of questions about the Jeep. The next day we leave the campsite early in the morning for part 2 of our trip. Between Lyon and Grenoble we become stuck in a big traffic jam. Not much fun when it is about 30 degrees Celsius outside. With the hot sun above and the engine running, inside the Jeep everything is getting hotter and hotter. Even the fuel is boiling out of the tank after I filled it up to its limit. At these points it is clear that traveling with a CJ-3B is very spartan.

In the late evening we enter a campsite at Vif to rest for the night. During the night it rains quite hard. Later the next morning I learn from a newspaper that in the north of France a severe storm has passed through the region where we spent our first night. As a result some 10 people were killed by falling trees and rooftops coming down. Not fun to read about it, knowing that as little as 24 hours ago I was there with my family. 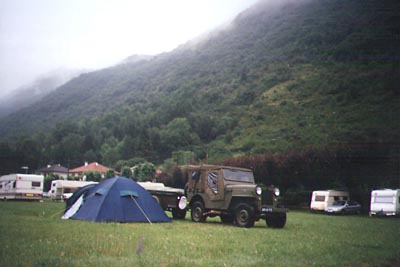 In the morning the rain passes by and the sun comes back again. Part 3 of our trip: the last 380 km to our destination, the Cote d'Azur. Driving through the beautiful mountains of the Provence helps us to forget the heat and the oil hose problems of the last two days. And again during tank stops and other rest stops, people from everywhere come to have a look at our Jeep. Most of them with real interest but a few with some sarcastic questions like "are you on a survival tour?" or "where is the war?" Jealous I think. With the temperature outside increasing, and driving through the mountains, the engine temperature goes up to dangerous limits. The fan belt wasn't very pleased with its oil bath from two days ago. Adjusting the belt solves the problem for this day but it is clear that this belt needs a quick replacement. 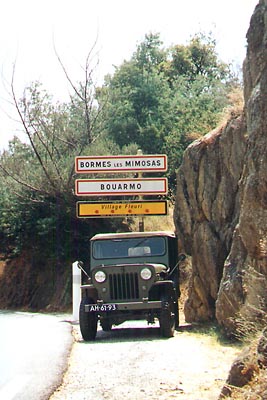 In the early afternoon we arrive at the campsite at Bormes les Mimosas where we will stay for the next 3 weeks. Despite the heat and the lack of comfort during the ride, I think I am more relaxed at the arrival than in other years when we used to travel through the nights with more comfortable transportation.

During our stay, besides lying at the pool or on the beach, I manage to get a new fanbelt and an oil hose with crimped fittings. Just to be sure for the way home. I have no problem to find the right parts, as in France the Hotchkiss Jeep is very popular (see Jeeps in France). A small anecdote: At some gas stations employees refused to put unleaded fuel in my tank. Only after I showed them a bottle with lead substitute they agreed with the fuel of my choice. 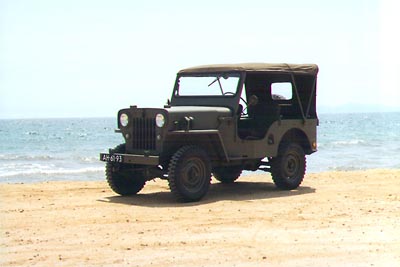 It was also nice to ride along the beaches of the Mediterranean with no top on the Jeep. Normally in the Netherlands, it's always raining. 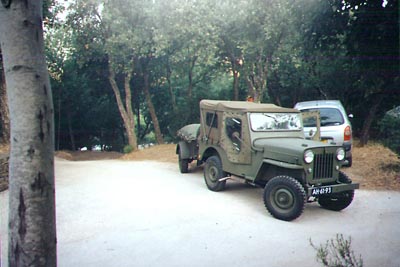 After 3 weeks (sniff sniff) it was time to go home. This time we decided to take a route entirely along the highway to save time and fuel. And again we became stuck in a traffic jam in the middle of the city of Lyon. And of course again it was extremely hot. The rest of the trip home passed without a single problem.

At home I checked out the entire Jeep and couldn't find anything that had broken or become loose. But until this day I can see the result of 3 litres of oil spread through an engine bay. On hot days there is still some oil sweating out of the seams from the tub or the fenders.

Despite the heat and some small other problems it was worth the effort to travel to the south of France. During these 4 weeks we put some 4000 km behind us. I think there is no better testing of the restoration than this. -- Piet Versleijen

Thanks to Piet for a great story. -- Derek Redmond

See also photos of Piet's restoration of his 1956 military CJ-3B.

Last updated 10 May 2002 by Derek Redmond redmond@cj3b.info
https://cj3b.info/Military/VersleijenHoliday.html
All content not credited and previously copyright, is copyright Derek Redmond