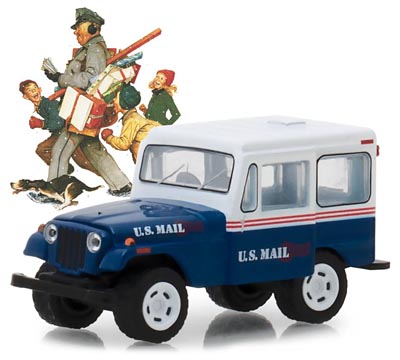 A GreenLight Collectibles release in time for Christmas 2018 was a 1/64-scale Postal Dispatcher which they called a 1971 Jeep DJ-5, and actually represents a DJ-5B.

This is part of GreenLight's Norman Rockwell Series 1 (180K JPEG). The set of six delivery vehicles inspired by Norman Rockwell illustrations has a definite Christmas focus, with the possible exception of the "mobile dental office" Chevy panel truck.

The "U.S. Mail" livery as shown on this pre-production sample, and even sold on the Norman Rockwell card (240K JPEG), is imaginary, and was later replaced with a more correct design (110K JPEG) sold on a USPS card. Thanks to Jerry Goddard for the packaging photos. 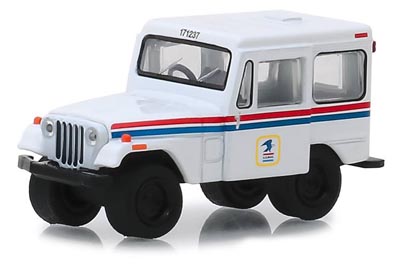 GreenLight soon also issued the 1/64-scale model in the later white U.S. Postal Service livery. They also called this one a 1971 DJ-5 (110K JPEG), and theoretically it could be a '71 DJ-5B repainted in 1979, when the USPS made the switch to all-white.

The version built by AM General in 1979 with the AMC straight 4 engine was designated DJ-5G. See The DJ-5 Dispatchers on CJ3B.info for more details on the DJ-5 to DJ-5M series of postal Jeeps. 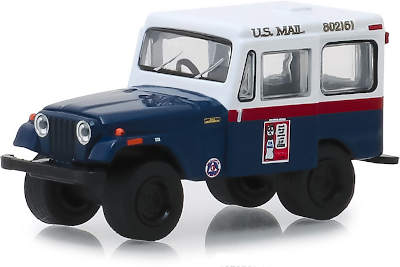 GreenLight never misses an opportunity to issue multiple versions of the same casting, and they added a few decals to this one and called it a 1974 DJ-5 (110K JPEG). Unfortunately the details they added are actually taken from a factory photo of a 1968 (200K JPEG), including the vehicle number and the 1968 promotional campaign poster "Don't tie up mail service...use ZIP CODES." Once again, GreenLight is to be commended for basing their models on actual vehicle photos from CJ3B.info, but I wish they would take the time to read the text accompanying the photos. 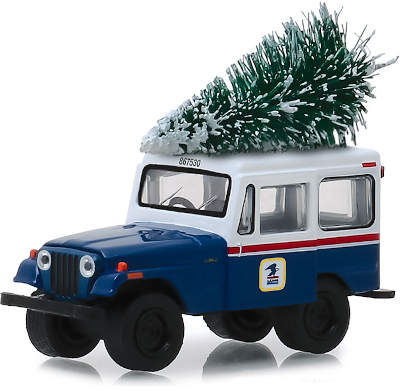 For Christmas 2019 the series added a version with a tree. Decoration returned to the basic US Mail logo on the door, eliminated the Civil Defense logo, and kept the "Jeep Dispatcher 100" badge on the cowl. Packaging referred to this one as a 1972 DJ-5 (120K JPEG). 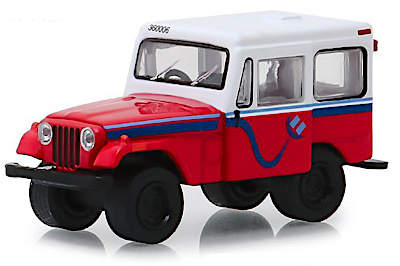 As of 2020, the most surprising version in the series is another late 2019 release. Not only is it painted red to represent Canada Post, but it carries the graphics of the 1976 DJ-5E Electruck.

AM General may have been ahead of their time with an all-electric Jeep, but they sold 350 to the USPS, and five to Canada Post. One of those five has been restored and can be seen in The DJ-5 Dispatchers on CJ3B.info. GreenLight's packaging labels this Electruck as a 1975 DJ-5 (120K JPEG)


The GreenLight DJ casting has also been used for some non-postal versions: see GreenLight Dispatcher 100 on CJ3B.info. 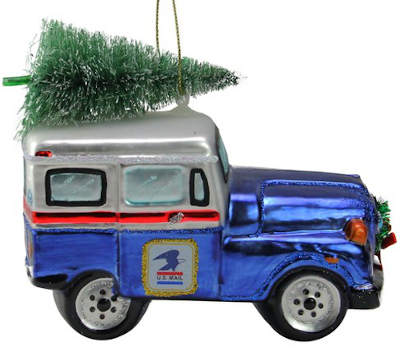 Not sure who has ever had their Christmas tree delivered by mail, but here's another postal Jeep toting a tree. For sale in the USPS Postal Store as of 2020, this 5-inch hand-blown glass hanging ornament is from Northlight. 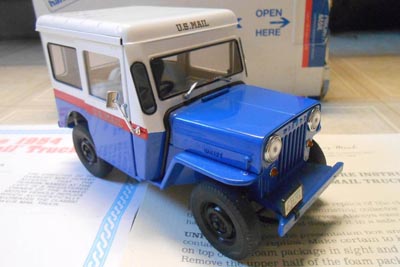 Willys apparently produced six more high-hood prototypes in 1958, but the post office ended up waiting until well into the 1960s before finally replacing the aging DJ-3A with the new DJ-5A. (See more details in U.S. Mail Via CJ-3B on CJ3B.info.) 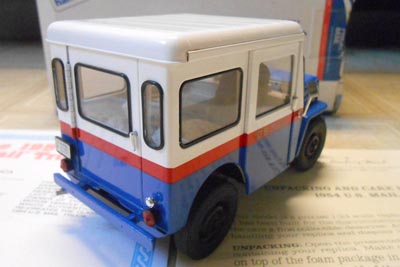 Steve Perialas provided CJ3B.info with some documentation on this model's background. RJ Studios, Inc., the company which actually created this Jeep for the Danbury Mint, took measurements from a CJ-3B restored by George Byam, which now belongs to Steve. They also measured Byam's DJ-3A Surrey, and a right-hand-drive postal DJ chassis which he located. See some of the photos taken by RJ Studios, with their letter to George Byam (70K JPEG).

This information suggests that the model's high-hood design may have been coincidental rather than intentional. The designers may not have been fully aware of the differences between various Jeep models, but it is still not clear why they decided to base the model on the CJ-3B.

The engine and interior of the model are detailed, as can be seen in Peter Pearson's photos with the hood open (20K JPEG) and door open (20K JPEG). Further specs on the Mail Truck, priced new at US$129, are in a brochure: see the front (190K JPEG) and back (220K JPEG). 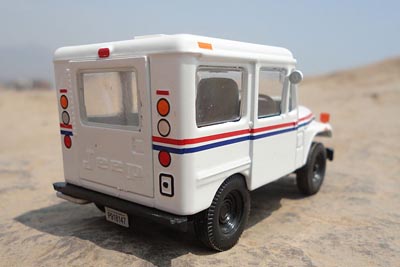 A USPS DJ was part of the 1/43-scale Diecast Jeep Colección for Latin America in 2016, from Ixo Models in China.

If this model represents a factory paint job, it would be a DJ-5G or subsequent version, built after 1979 when the blue and white USPS paint scheme was changed to all-white. See also a front view (100K JPEG) showing the distinctive protruding front grille, added by AMC to accommodate straight-6 engines in the 1970s.

Through Sleet and Snow... 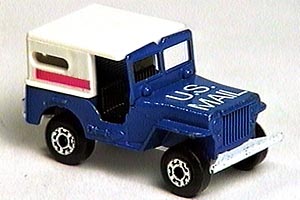 The first Matchbox U.S. Mail Jeep in 1978 was an American release, labelled with the Roman Numeral "No.II" and the "Sleet-N-Snow" nickname from the U.S. Postal Service motto, on the baseplate. The original color was powder blue (40K JPEG); the darker blue came later.

Both the "No.38" (military Jeep) and "No.II" baseplates appeared on all versions of the flatfender Matchbox Jeep in any livery during 1978. The identical No.5 U.S. Mail Truck (25K JPEG) was first issued in 1979, and the "No.5" baseplate gradually replaced the other numbers on all Jeeps from 1979 onward. Variations of the No.5 Mail Jeep included black hubcaps instead of silver, and larger side windows (30K JPEG).

There is also a Mickey Mouse Jeep which has two variations based on this casting. One of the two variations has a "Mickey's Mail Jeep" tampo on the hood; see Cartoon Jeep Toys on CJ3B.info.

Siku (made in West Germany) issued a Postal Jeep based on their CJ-5 casting #1053. It was a white body with a white top, 66mm (2.5 inches) long. The rarer variation on the right in the picture is a pearl coat white body with the same white plastic top. 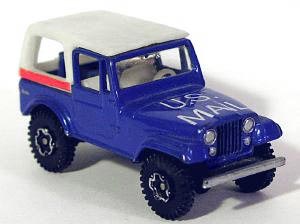 Playart in Hong Kong did a 1/64 U.S. Mail Jeep in the 1970s, based on their CJ-7 casting. This version had the silver details on the lights and the bumper hitch, but another variation was a darker blue without the silver details. 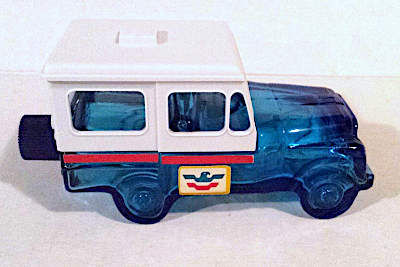 Avon released a Mail Jeep in its aftershave series. It is blue glass with a white top and a blue cap on the back. The decals were included in the package, and you had to apply them yourself. The box it came in was a Rural Free Delivery cardboard mailbox (80K JPEG). 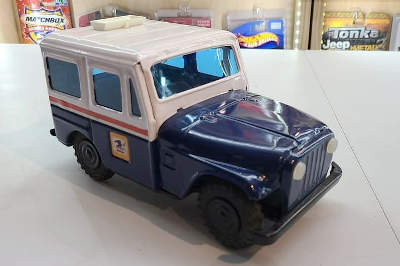 A tin Postal Jeep bank, made by Western Stamping Corp. in Korea. It is painted in the USPS colors with the U.S. Mail logo on the side doors. It is 8-1/2 inches long and has rubber tires. Windows are blue tinted. The bank/coin opening is on the top; the stopper on the bottom (80K JPEG) is the access to the coins. Lights on front and rear (80K JPEG) are plastic, and "Jeep" is embossed in the rear door. Thanks to Jerry Goddard for the photos. 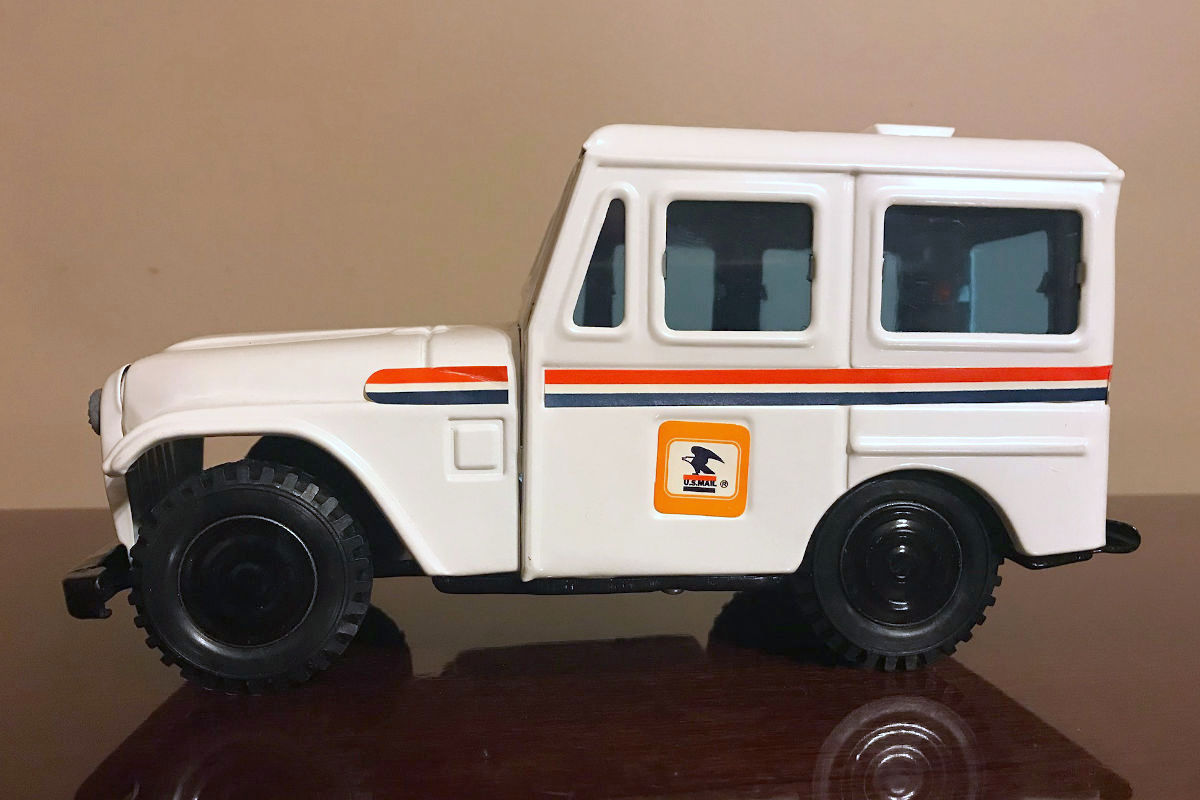 The Western Stamping bank was also updated with the new 1979 Postal Service white paint job. Thanks to Jeff Schwartz for the photo. 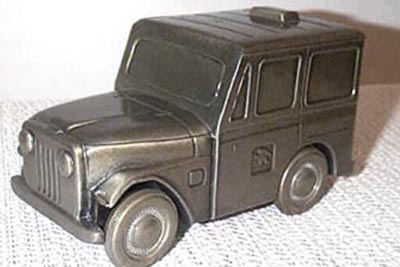 This casting from Banthrico is also a bank, with the coin slot in the bottom. Like the tin bank above, this model is actually based on the DJ-5A series of Jeeps we know as the Postal Jeep, rather than on an existing CJ toy. 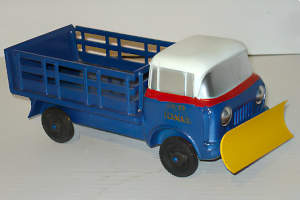 This FC-170 Forward Control truck is a Comet casting which was distributed through Jeep dealers. For a long time we didn't know whether FC's were actually used by the U.S. Postal Service, until we saw the photo below, from a History of Mail Delivery in the Toledo Blade. 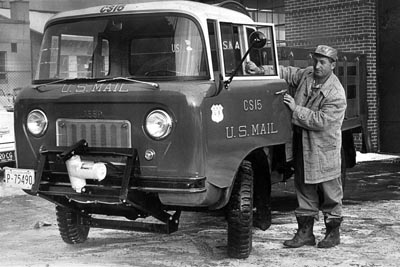 Caption from the Blade: "Frank Mrkva checks out one of the first 99 trucks ordered by the Post Office Department from Willys Motors Inc. in this Dec. 15, 1958, photo. The trucks, used for snow removal and mail box maintenance, cost $276,564 for the total order and were sent throughout the country." 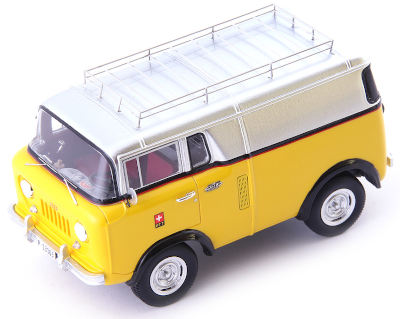 This 1/43-scale diecast Swiss postal Forward Control Jeep was released by AutoCult in Germany in 2022. Apparently Swiss PTT (Postal Telegraph and Telephone) ordered the FC-150s in 1956, and had the rear bodies custom built for them. 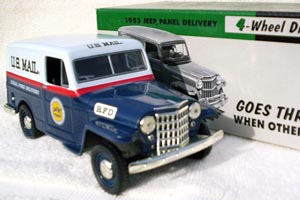 A 1/25-scale 1953 Jeep Willys Panel Delivery truck bank by Liberty Classics. It is painted in U.S. Mail, Rural Free Delivery livery with the Post Office Department United States of America logo on the door. The rear doors open to reveal the coin slot.

From the box: "Although the Willys trucks came equipped with only a four cylider engine, they capitalized on the vehicle's efficiency, durability and versatility. Some of their more popular selling features were: big one piece hoods, roomy cabs, short turning radiuses, high clearance fenders and low operating expenses." 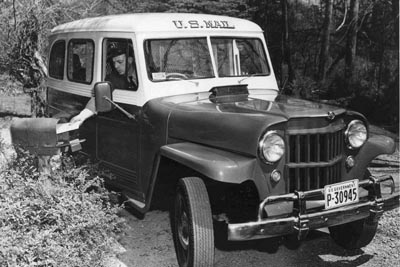 Like the Forward Control, the Willys Jeep Sedan Delivery was certainly not used as widely by the Post Office as the little DJs, but this photo indicates that the Utility Wagon version was at least tested for rural delivery. 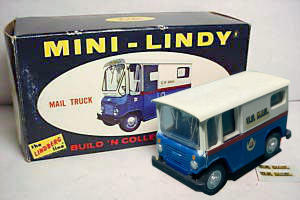 The USPS was the main user of the FJ-3 Fleetvan which was first developed as a postal vehicle. The FJ is perhaps the iconic "mail truck" but this tiny Fleetvan kit may be the only toy version. Made by Lindberg, probably in the 1970's, it was about 2 inches long and came in a variety of colors. Thanks to John Vercoe for finding this photo.

See also the Lindberg FJ-3 collection of the late Bill Kriegbaum, including the USPS version. Another slightly larger model in the "Mini-Lindy" series was a Jeepster Commando; see the box and a front view (30K JPEGs).