The Swiss Army had a lot of Jeeps, including over 1,500 surplus Willys MBs and Ford GPWs bought after World War II and 400 CJ-2As in 1947. I don't have figures for the CJ-3A, CJ-3B or CJ-5, but there were many, and the surplus Jeeps are now found across Europe. See more details on this history in Swiss Army Jeeps on CJ3B.info.

Switzerland had been neutral during the war, and continued this centuries-old policy into the Cold War in the 1950s. But it was an "armed neutrality," giving them the means to defend the country if necessary, and it required modern weapons. They decided to purchase armaments only from the West, not from the Communist Eastern Bloc, and this had the effect of endangering Switzerland's neutral status somewhat. ("Neutrality in the early Cold War: Swiss arms imports and neutrality" by Marco Wyss, in Cold War History, Vol. 12 No. 1, 2012.) It was later revealed that during the Cold War there was a secret Swiss unit known as P-26, trained in cooperation with NATO to harass potential invading Soviet forces. ("UK military helped secret Swiss force in Cold War", 27 April 2018, at BBC.com.)

The television broadcasts seen here were found online by Federico Cavedo. They date from the late 1950s, by which time the Army was ordering CJ-5s and even M38A1s, but those models don't show up yet on parade. 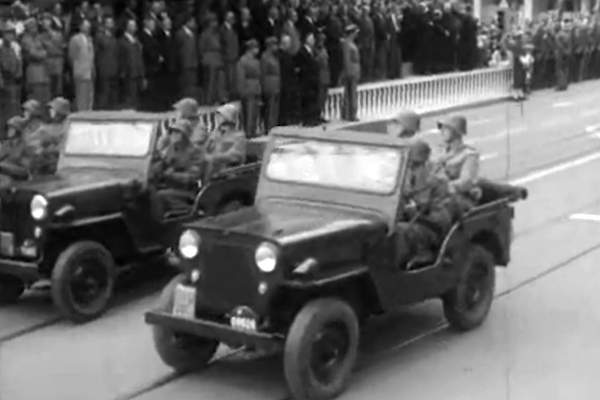 On 29 August 1958, Swiss television broadcast a parade by the Swiss Army in the city of Fribourg, located in western Switzerland. The description from Radio Télévision Suisse (RTS) reads, "The army parades in the city of Fribourg. Everything is clean and tidy. The population is there, calmly and in number, to see all these soldiers in step, well aligned. It was at the time when the army was proud to parade!" 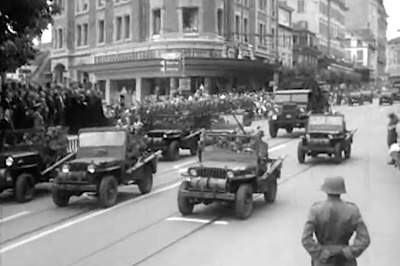 Some of the American surplus jeeps bought following the war were clearly still in use in 1958. This photo shows a CJ-3B, CJ-3A and MB side by side, with a war-surplus CMP truck in the background. The Jeeps appear to have light anti-aircraft guns mounted in the rear. See a closer view of the MB (70K JPEG). 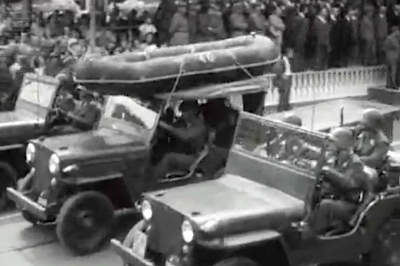 Other Jeeps in the parade are carrying inflatable rafts on top, probably belonging to the Army's numerous engineering units specializing in river crossings and bridging. ("The State of Switzerland's Defenses" in Military Review, August 1962, p. 79.) 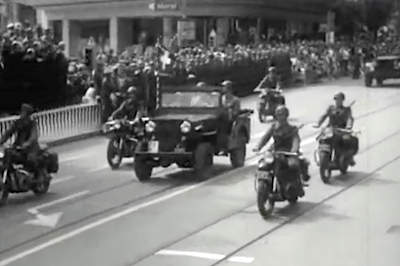 A high-ranking officer is apparently in this CJ-3B flanked by a motorcycle squad riding the made-in-Switzerland Condor A580. ("Swiss Mystery Machine" by Andy Saunders, at Motorcycle Classics.)

See the six-minute silent video of the Fribourg parade, from RTS. 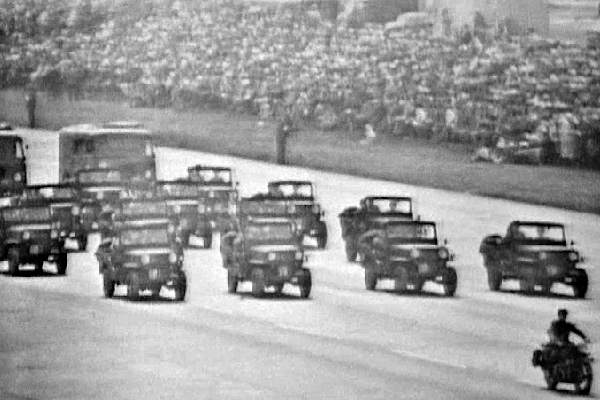 The following year, Swiss television transmitted an entire two-hour parade of the 1st Swiss Army Corps, live from the Payerne military airfield, on 14 May 1959.

The fleet here is all CJ-3Bs; the older flatfenders seem to be gone by this point, at least in the video excerpt available from RTS. 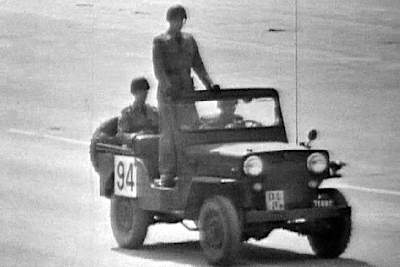 A commanders gets a ride in a CJ-3B, numbered to help keep track of all the units in this massive parade.

RTS comments, "This is a spectacular deployment of the national armed force: more than 100,000 soldiers and 30,000 vehicles participate in this parade. In this Cold War period, Switzerland devotes one third of the federal budget to its defense. With nearly 700,000 soldiers in operation, the army strength represents 10% of the population. In 2004, the number of active soldiers is now 120,000 and less than one-tenth of federal spending is allocated to defense." 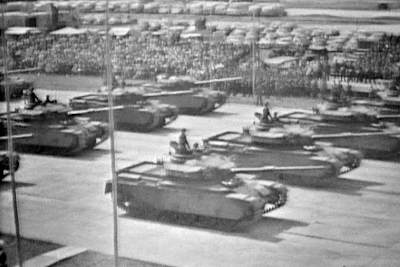 The tanks are the British Centurions. The Swiss Army purchased 300 Centurions starting in 1954, but they were soon to be supplemented with a very successful Swiss-designed and built battle tank with similar armament, known as the Panzer 61. The first prototype of this lighter and more maneuverable tank was built in 1958, but the 150 production units were delivered starting in 1964. ("Swiss Armor" by Richard M. Ogorkiewicz in Armor Vol. 76, Jan-Feb 1967.) 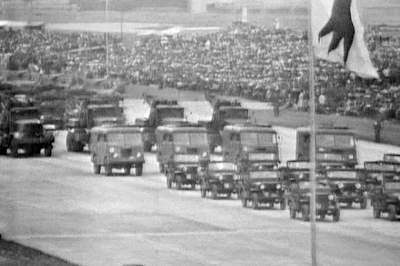 See the six-minute video from Radio Télévision Suisse, an excerpt of the original two-hour program, with commentary in German.


Thanks to Federico Cavedo and Radio Télévision Suisse. -- Derek Redmond