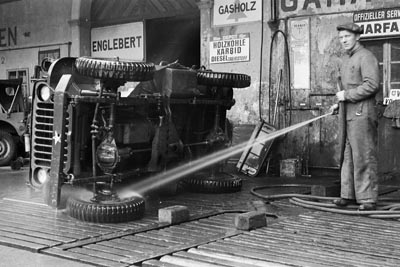 The Enzmann family in Switzerland, who developed the legendary Enzmann 506 fiberglass sports car (see below) also have a strong Jeep connection. Shortly after World War II, family patriarch Emil Enzmann, Sr. expanded his garage business in Schüpfheim by importing some sixty surplus jeeps from France to the Entlebuch district in central Switzerland, where they were refurbished and sold to farmers.

The photo shows his brother Robert washing the underside of a Willys MB, prior to tackling the bent bumper. 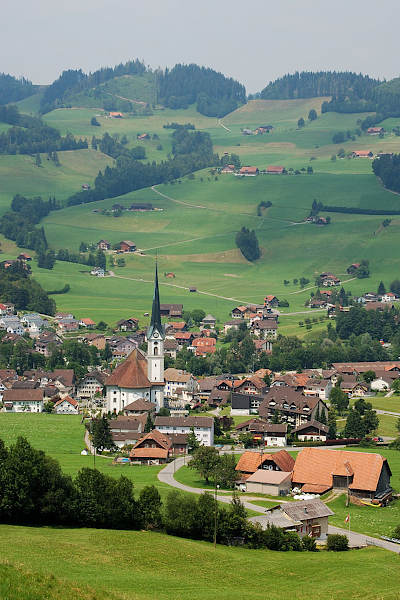 Grandson Kari Enzmann says, "At the weekends my father together with his classmates from university, drove the vehicles from Geneva to Schüpfheim (right) which always turned into a big party afterwards. My grandfather organised special events at which the Jeeps were displayed to customers.

"Besides the garage, my grandfather also owned a cinema and a hotel, and he liked to advertise his garage and Jeeps in between the films. After a while the Jeeps were also sold with closed cabs due to the very hard winters in Entlebuch."

Photo of Schüpfheim by Simon Koopman. 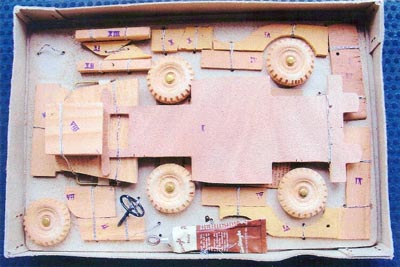 Kari Enzmann continues the story: "My grandfather had six sons; the eldest three were busy with the real jeeps and the youngest didn’t want to feel left out, so my dad drew a model of a Jeep on a scale of 1:17.5, and shortly afterwards the younger Enzmanns began their own production of model cars. The models were sold either as kits or as finished models; over 500 pieces were sold between 1945-1949." 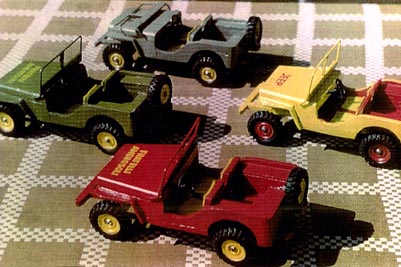 The owner of a toy shop chain didn’t want to pay what the youngsters thought the Jeeps were worth, so they sold most of the assembled, painted models to Fratelli Ambrosoli ("Ambrosoli Brothers") who had recently become the sole Willys importer in Switzerland. 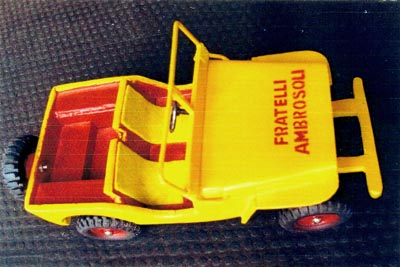 Pierino and Giannetto Ambrosoli used these colorful models as promotional gifts, and the idea helped to launch their business, which went on to sell some 20,000 Jeep vehicles over 30 years, through dealerships in Zurich (60K JPEG) and across Switzerland. 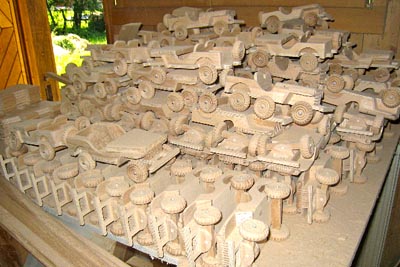 As of 2011, grandson Kari Enzmann has begun producing the wooden model Jeeps again, in the Zurich highlands, under the name Rob's Jeep (80K JPEG), named for brother Robert Enzmann, seen in the photo at the top of this page. 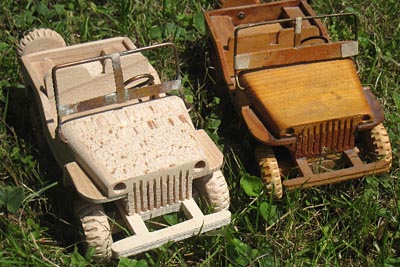 The replica (left) is almost identical to the original (right), including the soldered copper windshield and steering wheel. See also a side view photo (90K JPEG).

It is sold unfinished with a trailer (110K JPEG) and the 2011 price including the trailer is 99 Euros. 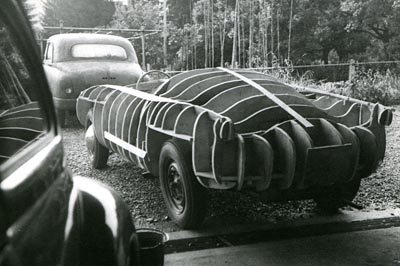 Meanwhile back in 1953, as the Ambrosoli brothers were scrambling to assure Willys that they were not selling any Jeep vehicles behind the Iron Curtain, one of the Enzmann brothers had turned his enjoyment of driving a jeep on mountain roads, into an interest in designing a sports car. Kari's father, Emil Enzmann, Jr. had become a doctor, but put his woodworking skills to good use in building a wooden framework for the body of his design. 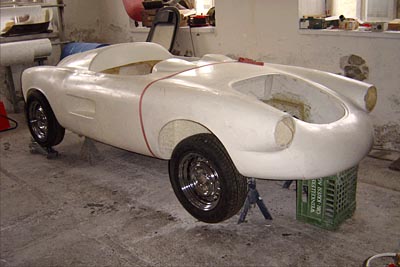 Emil wanted to make a safe but economical sports car, with good acceleration and easy handling. It would become the Enzmann 506, built on a VW Beetle chassis. The first body was aluminum, but Emil soon decided he and his brothers could use fiberglass, which was a novelty in the 1950s. To save weight while increasing strength, they gave up doors. 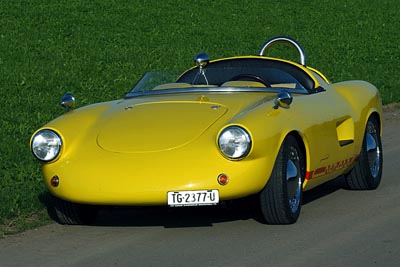 The first prototype was completed in 1956, and made its international debut at the 1957 Frankfurt Motor Show, where it picked up the model designation 506 from the number of the Enzmann display booth! Total production between 1956 and 1969 was about 100 units, including Spider, Cabriolet and Hardtop models. Frames and engines were purchased from Volkswagen. 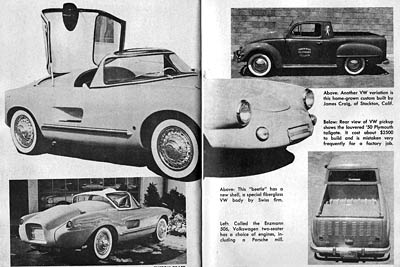 A feature on modified Volkswagens in Custom Craft magazine, 2 February 1960, shows a hardtop 506, as well as a couple of VW pickup conversions. 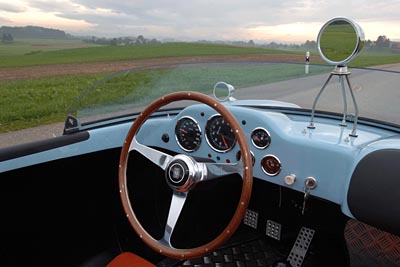 Some other innovative ideas in the 506 included a front seat passenger impact cushion, integrated roll bar, and ergonomically designed seats with lap belts.

See an early advertisement in German (50K JPEG), promoting fiberglass for its light weight, resistance to corrosion, insulation of temperature and noise, flexibility and ease of repair. 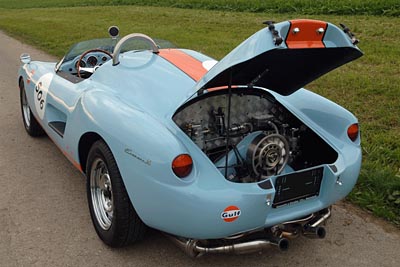 The 506 was much faster than the Beetle thanks to the lighter body, but also thanks to engine choices which included the Okrasa high performance engine used in some Beetles, or the Porsche 356 engine. The cars had some success in racing, but production stopped because Volkswagen realized the Enzmann was a competitor for their Karmann-Ghia and declined to continue supplying the chassis. 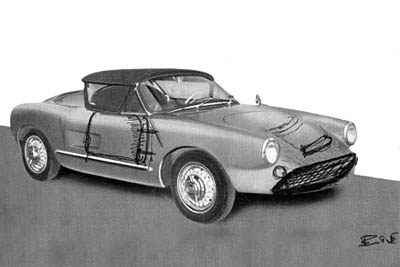 This sketch of the modifications appears to be signed by "EE." 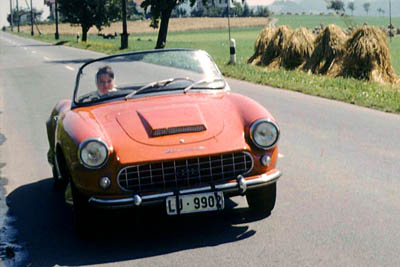 The new model was apparently going to be called the Enzmann 500. Although the DKW Enzmann 500 had similar lines to the Enzmann 506, it also had improvements including two doors and an extra emergency seat. But the number of 500's built was very small.


Thanks to Kari Enzmann for keeping up the family tradition, and for providing many of these photos. Also Forgotten Fiberglass for the magazine clipping, The Pierino Ambrosoli Cultural Foundation for the dealership photos, and Classic Cars in South Africa for the Enzmann 500 photos. -- Derek Redmond