I learned some things I didn't know about the 1953 purchase of Willys-Overland Motors by Kaiser Industries (and how Kaiser almost sold it to Chrysler a year later) when I read some articles recently from the New York Times archives and a scrapbook of newspaper clippings found by Federico Cavedo at the University of Toledo Digital Repository. You can click on any of the clippings below to see a full-size scan.

Henry J. Kaiser's auto division Kaiser-Frazer, run by his son Edgar, was losing money in the early 1950s, and was being supported by some $48 million in government loans and $31 million in future tax credits. Meanwhile, Willys-Overland under chairman of the board Ward Canaday, who had run the company since the death of John North Willys in 1935, was chugging along making a tidy little profit building Jeeps. The fact that they could be taken over by Kaiser tells you something about the worlds of finance and auto manufacturing. 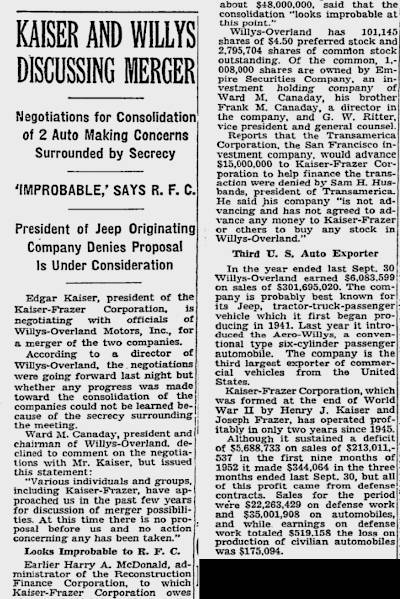 The front page of the business section of the New York Times on 28 February 1953 said that something was up. Somebody on the Willys-Overland board of directors had leaked the information that there were secret merger negotiations, but chairman Ward Canaday would only say, "Various individuals have approached us in the past few years... At this time there is no proposal before us...."

Harry A. McDonald, head of the Reconstruction Finance Corporation, the government agency who had lent Kaiser the $48 million, commented that a merger "looks improbable." He quite possibly felt his agency would not look good if the company he had recently bailed out was now involved in a major takeover. 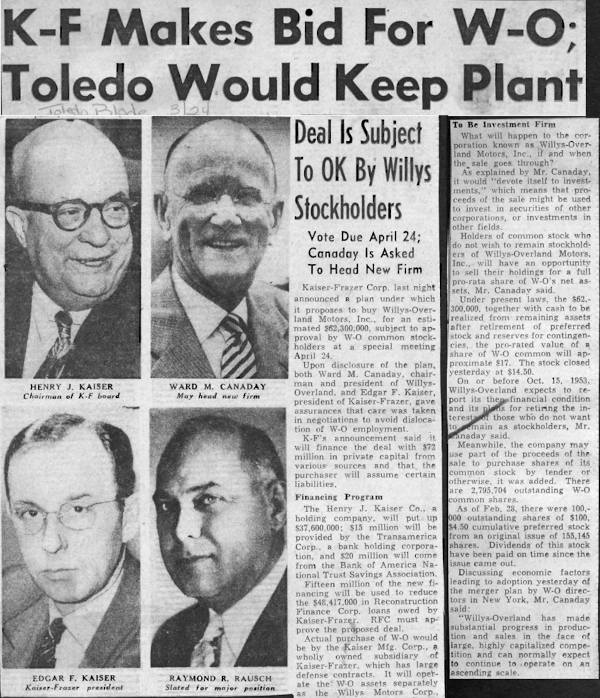 Front page news in the Toledo Blade on 24 March 1953:   Ward Canaday was planning to sell the assets of Willys-Overland to Kaiser-Frazer Corp., subject to the approval of stockholders.

The price would be $62 million, about half of which would come from banks. Canaday was being asked to continue as chairman of the new Willys Motors, which would be the world's fourth largest auto company, and he took pains to emphasize that existing employees and plants would be safe.

Canaday explained that Willys-Overland's profits were mainly going into product development, advertising, and taxes, so its stockholders were not seeing returns. To be successful in the auto industry, the company needed to be larger, with more capital available. He added that the old Willys-Overland Inc. would continue to exist as an investment company, for any stockholders who did not want to take their cash payout. 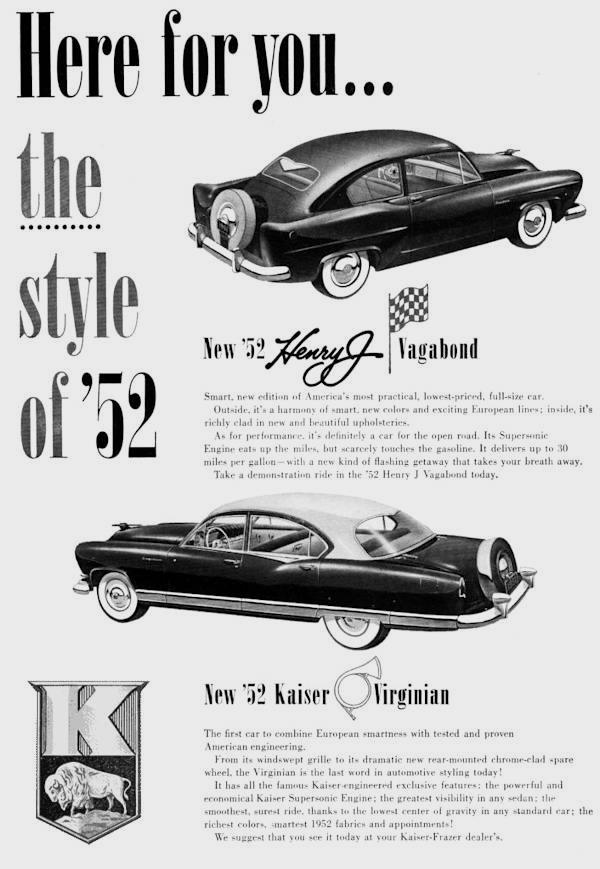 Henry J. Kaiser had only been in the car business for a few years, after having built the Hoover Dam in the 1930s and thousands of ships during World War II. The large Kaiser industrial empire had deep pockets, but Kaiser-Frazer cars had met with limited success.

For 1952, Kaiser had offered thousands of unsold 1951 sedans re-badged as the 1952 Kaiser "Virginian," and thousands of leftover 1951 "Henry J" economy cars with new continental spare tires added, as the 1952 "Vagabond."

The company already had some business connections with Willys-Overland. Their Henry J, "cheapest new car in America," was offered with a choice of two engines, both supplied by Willys: the L-head 134 four-cylinder, and the L-head 161 straight six. 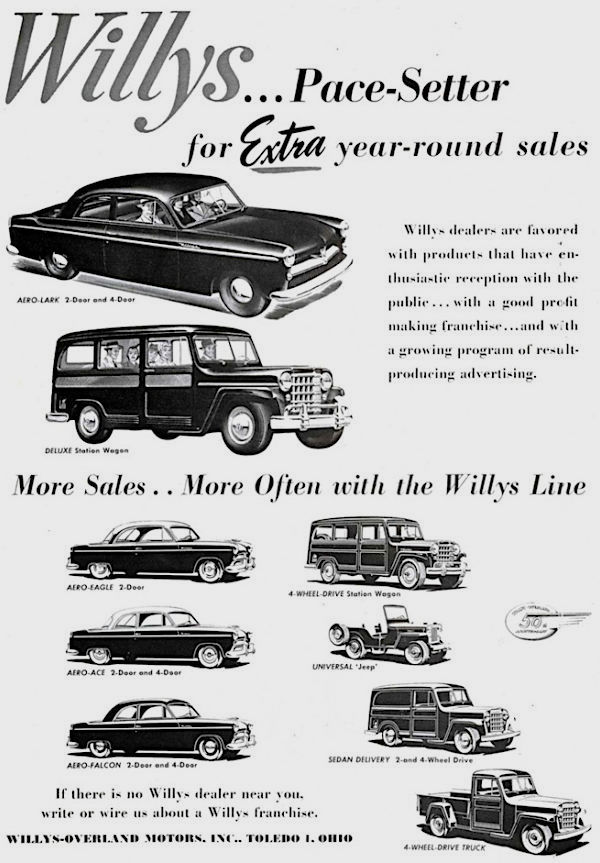 Kaiser no doubt felt that if the two companies merged, the Willys Aero would fit nicely in between the budget Henry J and the luxury Kaiser. But even at this early point in Jeep history, Henry J. Kaiser probably realized that the real prize was the lineup of unique Jeep utility vehicles.

Willys-Overland was also celebrating its 50th anniversary (160K JPEG) in 1953, so it had a well-established dealer network. This 1953 Willys advertisement was aimed at recruiting additional dealers.

The ad included the new CJ-3B Universal Jeep (but in the form of a retouched illustration of a CJ-3A, which did not accurately show how high the new hoodline really was.) 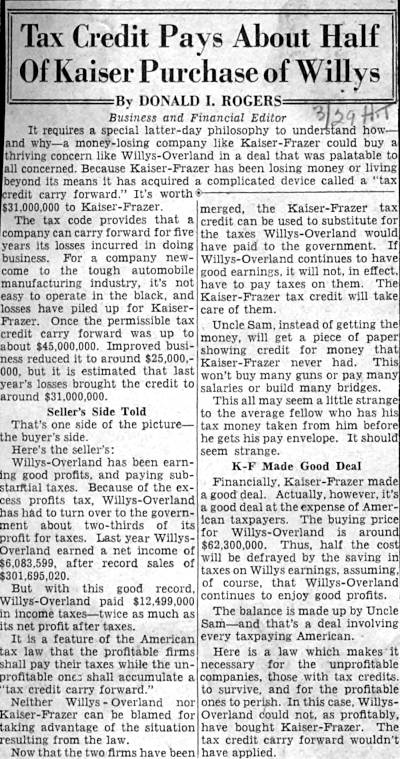 New York newspapers were also taking note of the Kaiser announcement, and on 29 March the Herald Tribune's Financial Editor Donald I. Rogers published this analysis of "how and why a money-losing company like Kaiser-Frazer could buy a thriving concern like Willys-Overland...."

He explains the tax situation: "Because Kaiser-Frazer has been losing money or living beyond its means it has acquired a complicated device called a 'tax credit carry forward.' It's worth $31,000,000 to Kaiser-Frazer. The tax code provides that a company can carry forward for five years its losses incurred in doing business."

Meanwhile, "Willys-Overland has been earning good profits, and paying substantial taxes... $12,499,000 in income taxes, twice as much as its net profit after taxes."

The result of the merger, says Rogers, will be that "If Willys-Overland continues to have good earnings, it will not, in effect, have to pay taxes on them. The Kaiser-Frazer tax credit will take care of them. Uncle Sam, instead of getting the money, will get a piece of paper showing credit for money that Kaiser-Frazer never had."

He concludes, "Kaiser-Frazer made a good deal... at the expense of American taxpayers. The buying price for Willys-Overland is around $62,300,000. Thus, half the cost will be defrayed by the saving in taxes... and that's a deal involving every taxpaying American."

"Here is a law which makes it necessary for the unprofitable companies to survive, and the profitable ones to perish." 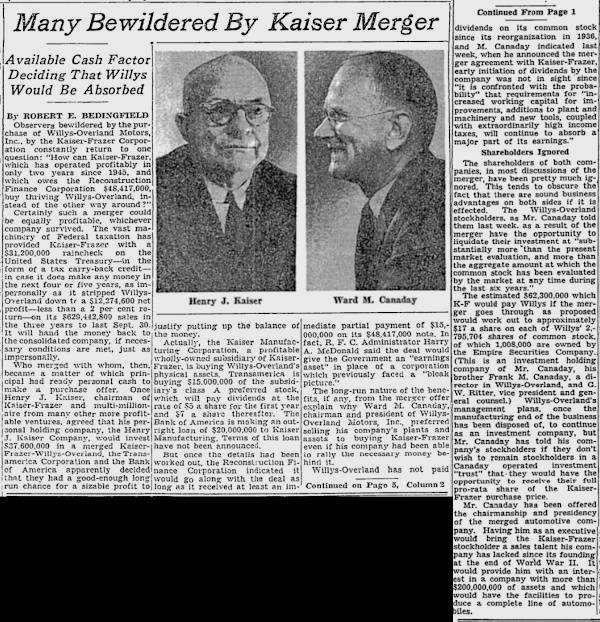 Donald I. Rogers doesn't even refer in his piece above, to the $48 million in loans Kaiser got in 1949 from the government's Reconstruction Finance Corp. But in a New York Times story, also on 29 March, that little detail was brought up, with photos of Kaiser and Canaday that looked like mug shots.

The article gave a fairly detailed look at the structure of the deal, and pointed out that who bought who, depended on having available cash, and Canaday's money was tied up in plant improvements and income tax. The conclusion was that there were "sound business advantages on both sides." 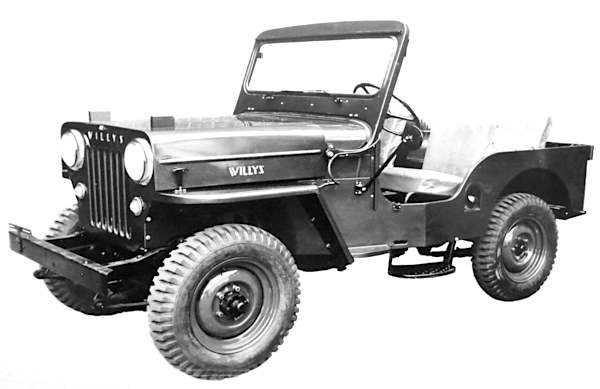 At the moment that the merger was pending, the vehicle at the center of the Jeep fleet was the new CJ-3B Universal Jeep. It was selling well, and the advertising proudly touted the larger, more powerful engine.

It had taken a few years for Willys-Overland to get the nerve to go ahead with this high-hood flatfender (see New Universal Jeep Designs, 1949-53) but this new wide-angle lens photo actually exaggerated the increase in hood height. 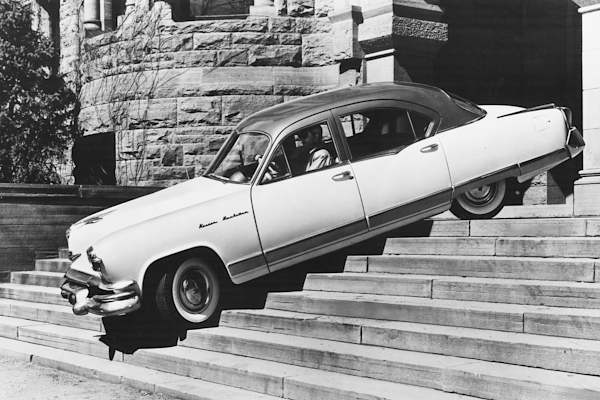 Both Kaiser and Willys cars would be built alongside Jeeps on the same assembly line in Toledo for two years after the 1953 merger.

Maybe somebody thought that promotion of the cars could also take some hints from Jeep advertising. This photo was intended to show the control provided by the 1953 Kaiser Manhattan's power steering.


The Deal is Done 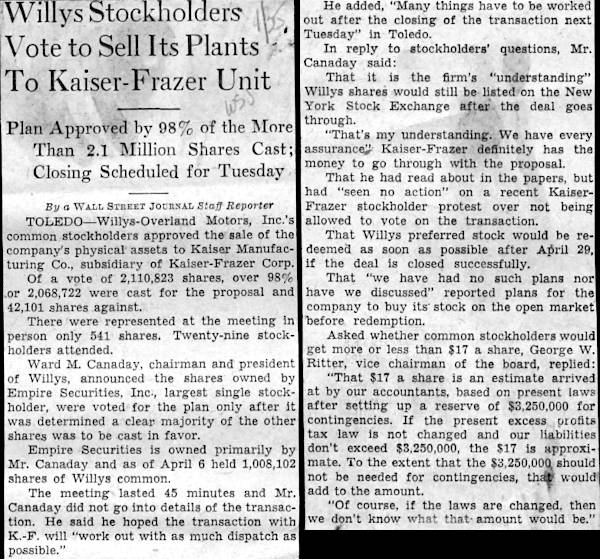 Newspapers including the Wall Street Journal reported on 25 April that the sale had been approved the day before by a vote of 98% of shareholders, which the Associated Press said was probably a record. The meeting was brief and attended in person by only 29 stockholders.

Interestingly, the Wall Street Journal article also mentions that there had been some protest by Kaiser-Frazer stockholders, who had not been asked to approve the deal. 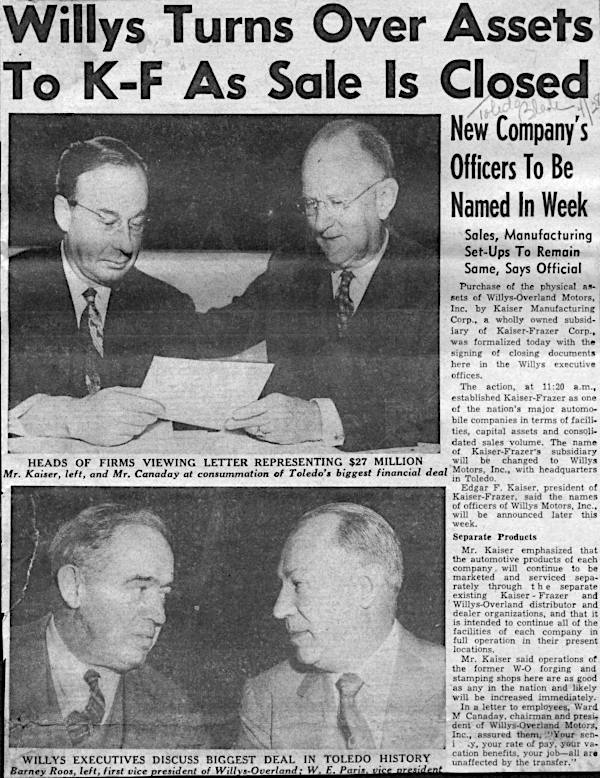 Edgar Kaiser and Ward Canaday were once again on the front page of the Toledo Blade on 28 April, the day they signed the final agreement of sale in the Willys Administration Building. But significantly, there was no longer any suggestion that Canaday was going to continue with the new Willys Motors Inc. (And in fact he did retire from the board of directors, and launched his investment firm which used the name "Overland Corporation" until 1966.)


A Bumpy Road Ahead 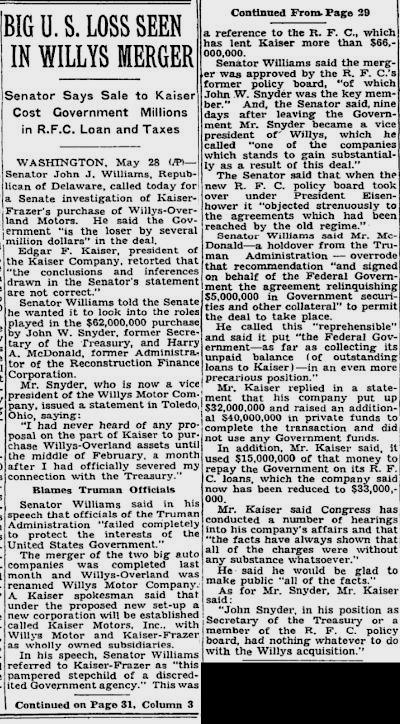 Kaiser brought their rocky financial situation with them into Willys Motors, and the new company would be in the red for the next couple of years, as it tried to sell cars as well as Jeeps.

The merger also became a bit of a political football, when Senator John J. Williams of Delaware revealed in Washington that not only did the deal cost the government millions in loans and taxes, but that former Secretary of the Treasury John W. Snyder was now a vice president of Willys Motors.

The New York Times reported in this article on 29 May 1953 that Senator Williams was also questioning the role of Harry A. McDonald of the Reconstruction Finance Corp., whom you may remember from the top of this page. Senator Williams called Kaiser-Frazer a "pampered stepchild of a discredited government agency."

Willys vice president Snyder issued a statement saying, "I had never heard of any proposal on the part of Kaiser to purchase Willys-Overland until the middle of February, a month after I had severed my connection with the Treasury." (Which is hard to believe, given that the Times had reported on 30 January (140K JPEG) that Snyder was leaving Cabinet to join Willys.)

Edgar Kaiser commented, "John Snyder, in his position as Secretary of the Treasury or a member of the R.F.C. policy board, had nothing whatever to do with the Willys acquisition." 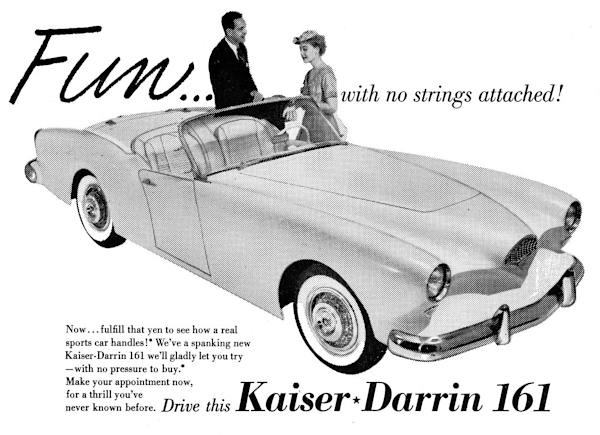 Some might have said that this slogan, "Fun... with no strings attached!" summed up the Kaiser approach to business.

But the Kaiser-Darrin 161 sports car would be Henry Kaiser's final money-losing car venture.

The Kaiser-Darrin used a modified Henry J frame, with the six-cylinder version of the F-head Willys Hurricane. Although it carried a Kaiser badge, the builder's plate identified it as a Willys. In the end, only 435 of the fiberlass-bodied roadsters were assembled in Kaiser's parts warehouse in Jackson, Michigan, in late 1953 and early 1954.


Production of other Kaiser cars and the Willys Aero, at the Willys plant in Toledo, was also slow, due to lack of demand. A small article in the New York Times on 30 June 1954 (80K JPEG) reported the layoff of 1,500 workers at the plant for six weeks, as car production was suspended. Some 6,100 employees remained at work building Jeeps, although the entire plant would also close for a two-week vacation. 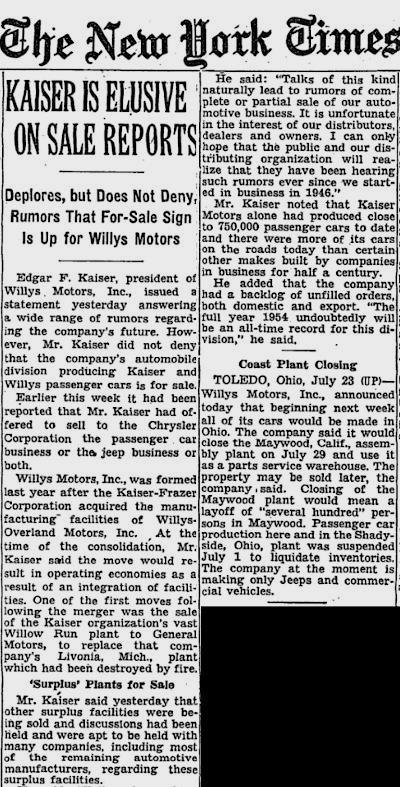 We know that Chrysler Corporation ended up buying the Jeep brand from American Motors in 1987, but did you know that it almost happened more than three decades earlier? It's interesting to speculate about what that would have meant for Jeep history.

The tale was told in this headline on the front page of the New York Times business section of 24 July 1954: "For Sale Sign is Up for Willys Motors."

There were reports that Edgar Kaiser had approached Chrysler to offer them the Kaiser cars or the Jeeps, or both, and he didn't deny the rumors. He didn't say much more, but did claim that the company had a lot of orders for their vehicles, and said, "The full year 1954 undoubtedly will be an all-time record for this division."

Well, a record loss maybe! A report in the Times on 23 April 1955 would reveal that Willys had lost $27 million in 1953 and $35 million in 1954. After the eyebrows that had already been raised about government money going to Kaiser, they would have been reluctant to start looking for another bailout, so selling the business again might seem like a solution.

But Chrysler wasn't ready yet. And during 1955-56, Kaiser did manage to turn Willys Motors around, primarily by getting out of the car business and focussing on Jeeps. See more details on that period, and more on their last car, the Kaiser-Darrin 161, in What Henry Kaiser Gave Up to Make Jeeps on CJ3B.info.

By the way, at the bottom of this Times article it was noted that the Willys plant in Maywood, California would be closing on 29 July 1954, leaving all Jeep production in Toledo. This date is a fact I did not know until now.


Thanks to Federico Cavedo for locating the newspaper clippings in the University of Toledo Digital Repository. Thanks to Alden Jewell for the Kaiser ads, and the New York Times for articles from their Times Machine. -- Derek Redmond

Elsewhere on the web, see Kaisers Never Retrench: The History of Kaiser-Frazer, Part 2.