Jeeps at War in Angola

Independence movements which began in the Portuguese colonies in Africa following World War II were suppressed by Portuguese military force until 1975. The 1974 military coup in Portugal was in part sparked by the desire to withdraw from the African colonies, particularly Angola where there had been 14 years of war. 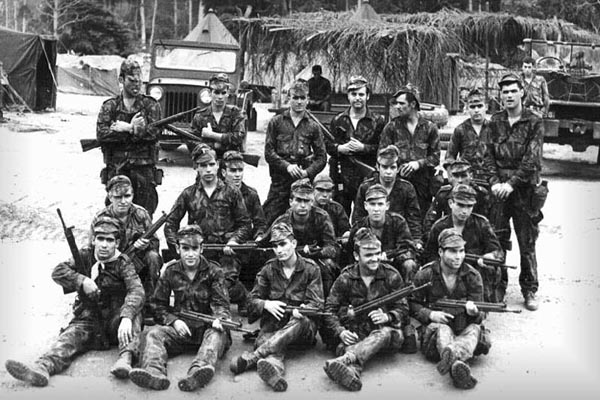 This photo shows the 2º Grupo de Combate ("2nd Combat Group") of CCAÇ 2739, part of Batalhão de Caçadores 2919 ("Battalion of Hunters 2919") of the Portuguese Army. The picture was taken in the early 1970's while the unit was stationed in Cabinda, an area on the Atlantic coast of Angola, isolated from the rest of the country. In the background is a CJ-3B Jeep and a larger truck. 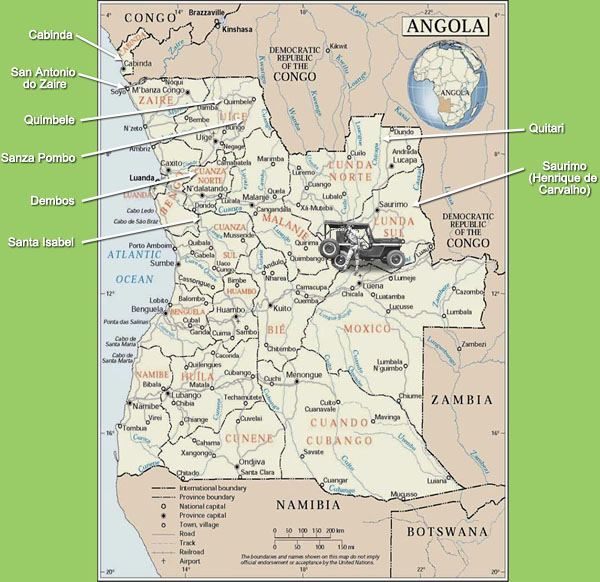 Cabinda is the "exclave", completely separate from the rest of the country, in the northwest corner of this United Nations map of Angola (300K JPEG). Also indicated on the map are the other locations mentioned on this page. 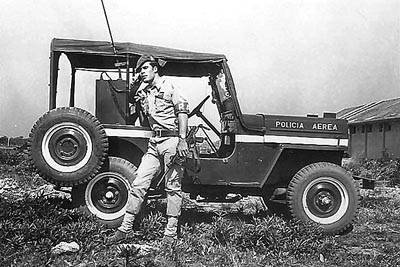 The city of Saurimo, known during the Portuguese occupation as Henrique de Carvalho, has long been a military outpost on the eastern side of the country. During the war in Angola, Henrique de Carvalho was the site of Aeródromo Base 4 (AB4). Security was provided by the Polícia Aérea, military police of the Portuguese Air Force, in their distinctive blue berets. This 1965 photo is courtesy Ze Neto. 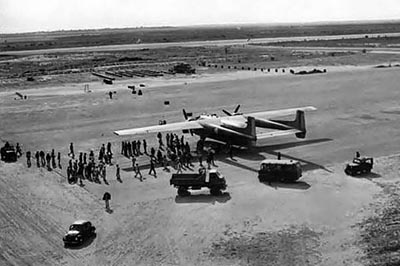 Henrique de Carvalho was named after a Portuguese explorer who visited the region in 1884. The air base saw a huge amount of military activity from 1963 to 1975, including the Flying Boxcar in this 1965 photo by Feliciano Ruiz. The field is now known as Saurimo Airport. 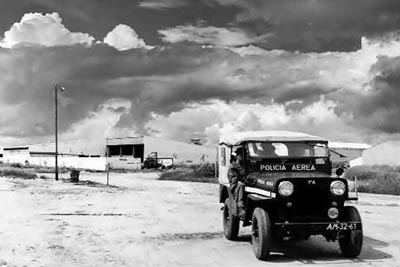 A 1966 photo of the Polícia Aérea at AB4, by Carlos Riquier, courtesy of Club de Especialistas do AB4. 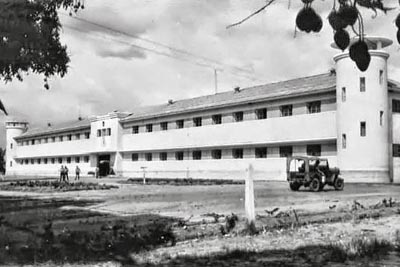 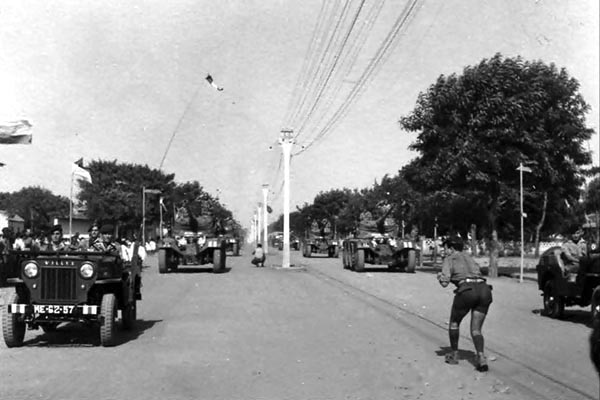 From the same album, José Ventura's 1963 picture of a parade in Henrique de Carvalho. Behind the Jeeps is a squadron of 8x8 Panhard EB8 wheeled tanks, which could travel at 60 miles per hour. (See more details and photos of the EB8 in The Carnation Revolution on CJ3B.info.) 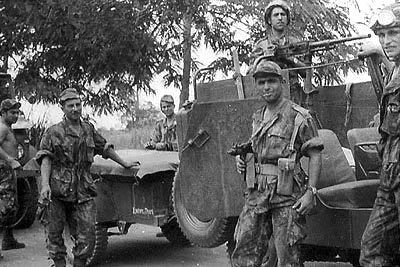 Daniel Costa's photo from his blog Love in War shows his unit heading inland from the capital Luanda, on their first counter-insurgency mission in the Dembos region in 1962, in Jeeps and Unimogs. It reveals an early application of armor plate around a machine gun on the CJ-3B. WIthin a few years armor plate would be used widely on Jeeps, particularly in the Congo. 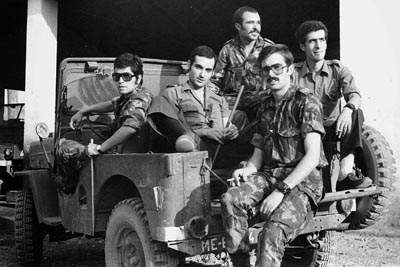 Twelve years later, the Portuguese Army was getting used to being in Angola, and posing with their Jeeps. This picture of members of Cavalry Battalion 8423, in Santa Isabel circa 1974, is from Cavaleiros do Norte, BCAV 8423.

See also a photo of an unidentified group of soldiers posing with their Willys Jeep truck (70K JPEG) which appears to be a command and communications vehicle. 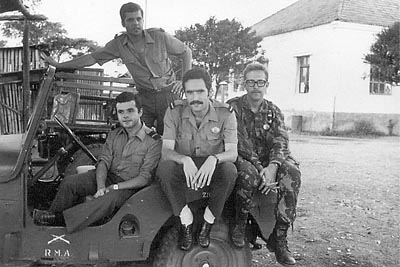 This photo from the Arquivo Digital photo database in Portugal, is part of the collection of Dr. Moura Favour who was in the driver's seat of this Jeep when the picture was taken in March 1973 near Quimbele. The other three officers are Second Lieutenants Virgilio, Valle and Oliveira.

The Jeep appears to be a post-1962 Willys CJ-3B, since it has the T-handle parking brake high on the dash. 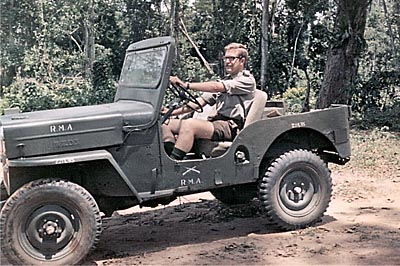 Second Lieutenant Oliveira, of 3 Company of the Batalhão de Caçadores 4511, has the same Jeep again in this April 1973 photo taken near the Futa River in Quimbele. According to Moura Favour it's the Captain's Jeep. With his red hair and glasses, Oliveira stands out a bit from the rest of the Portuguese soldiers, and in his shorts here he manages as usual to seem a little out of place.

Thanks to Angelo Benevides for identifying the "RMA" marking as an acronym for Região Militar de Angola, or "Angola Military Region."

But Oliveira didn't spend all of his time joyriding in the Jeep. Here he's seen in May 1973 during a 3 Company operation in the Quitari area, with Captain Alves, and in the foreground, Furriel Galvão who supplied the photo.

Enrique Oliveira took this picture in the nearby regional capital of Sanza Pombo. Maybe the Jeep parked in front of the building housing the battalion headquarters, is the same RMA Jeep seen above. But is that a Land Rover in front of the Officer's Mess? 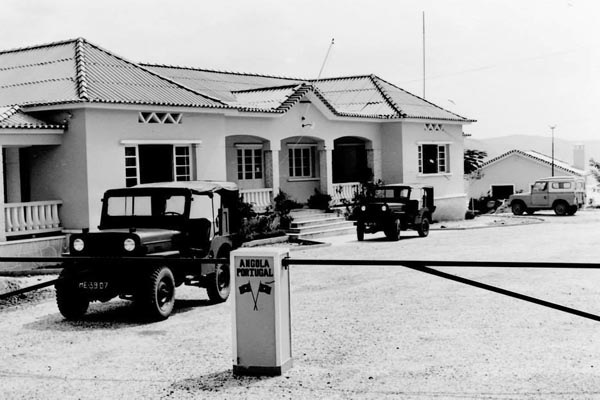 Another Land Rover, in this undated photo courtesy of journalist Vicente Talon Ortiz. This border post of Portuguese Angola is reportedly at San Antonio Do Zaire, near the Congo River separating Angola and Congo.

Portugal abruptly withdrew from its African colonies in 1975. But unprepared for nationhood and saddled with poverty and violent political factions, Angola faced many more years of fighting. With the Soviet Union and Cuba supporting the Marxist MPLA government, and the United States and South Africa supporting the anticommunist UNITA, the country became a cold war battleground. Despite international support for negotiations in the 1990's, UNITA continued to fight the government until 2002.

Thanks to Federico Cavedo, Pierre Joubert, Moreno Colcheta, the photographers, and the Arquivo Digital. -- Derek Redmond