The ANC operations spearheaded by mercenaries from 1964 on relied heavily on rapid advance by road. Surprise and overwhelming fire power were the main elements of their tactics and armed Jeeps was a key element in the operations. The Simbas were known for their extremely poor marksmanship, but ordinary Jeeps left the crews terribly exposed to even stray bullets.

Before long, the M606s of the operational units were therefore given at least some armor protection. The modifications were in most cases much less extensive than on the Katangese armored Jeeps (see Part 4) and the armor plating was generally minimal, providing moral support rather than real protection. On the other hand, mobility was not impaired to the same extent that it had been in Katanga. There was no common design to the modifications which in many cases seem to have been carried out in local workshops, and even Jeeps of the same unit seldom looked quite the same.

The first armored Jeeps appeared in time for the operation known as "Ommegang": the advance on Stanleyville (see the Congo map) in November 1964. There were as yet only a few scattered examples of armored Jeeps and the first columns were instead led by real armored cars. But as the operational area expanded there were not enough of these to go around, and over time they wore out and broke down. So the lightly armored Jeeps (and some armored trucks) became the next best thing for the ANC. 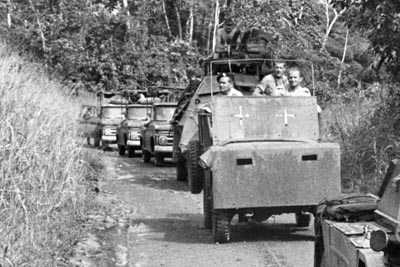 The very first armored M606 in the Congo was also among the most heavily armored examples. It was intended as the command vehicle of Lt. Bero, who was in charge of one of the armored platoons of the Ommegang column, and is seen here sandwiched between a Ferret armored car and a Scania-Vabis SKP armored personnel carrier during the advance towards the north. Most of the troops rode in ordinary commercial trucks, like the Chevrolet pickups further back.

A second photo shows the column from the rear (210K JPEG) winding its way towards Stanleyville along the Congolese "highway", with Bero's Jeep as third vehicle. (Photo © Jean Kestergat) 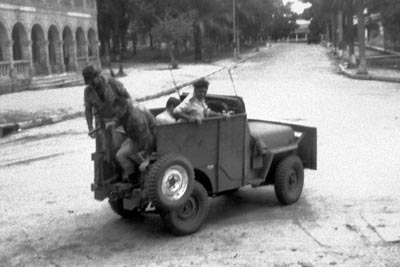 This photo was taken after arrival in Stanleyville on November 22, 1964. Bero's M606 had an armor box enclosing the crew on three sides plus a plate on the front with slits for the headlights. Uniquely among the armored Jeeps, it had no machine gun mounted. The spare wheel had a lighter duty civilian tire; not unusual on M606s in the Congo. (Photo via Belgian Military Archives) 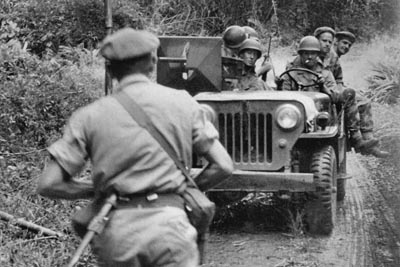 An M606 of the English-speaking 5 Commando in late 1964. The windshield has been removed and a .30-cal. machine gun has been mounted on a pylon in front of the passenger and given a protective shield. But the Jeep is otherwise unarmored and the crew is very exposed to enemy fire. (Photo via Ivan Smith) 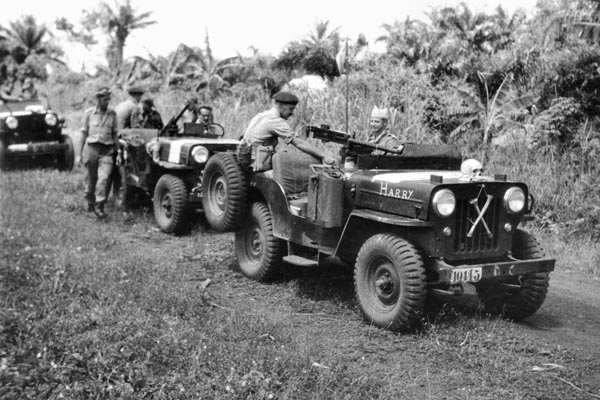 "Harry" belonged to 52 Commando -- a part of 5 Commando -- and is seen on patrol near the airport at Paulis in 1965. It is representative of the very simplest armored Jeeps, with nothing more than a single piece of steel plate cut to rough shape and welded or bolted to the cowl in place of the windshield. The rather gruesome decorations on the front were in fact not typical of the mercenary Jeeps. (Photo via J-P Sonck)

The first unit to make more extensive use of armored M606s was the Special Para Group, also known as Groupe Noddyn after its commander. It was set up for possible use in a paratrooper mission but instead became a vanguard ground assault unit of 6 Commando. Its first Jeeps were converted in the town of Bumba in northern Congo in late November 1964, to lead the column heading for Paulis (see the Congo map). 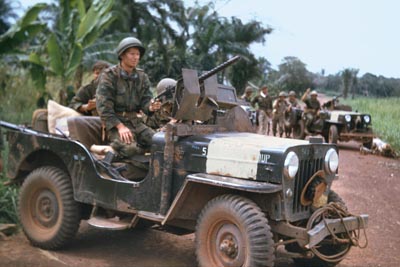 "Paula" was an early Para Group Jeep seen at Paulis in late 1964. It is of unusual construction as instead of being mounted directly to the top, the slab armor rests on struts fitted on either side. The same frame holds up the mounting for the .30-cal. gun. On the hood sides is the text "5 Commando Group", mostly painted over with an air recognition stripe. On the side are small paratrooper wings in light blue, found on most of the group's vehicles. Dangling from the grill is a hat decorated with monkey skin, a common piece of clothing with the rebels. (Photo © Francois Carlier) 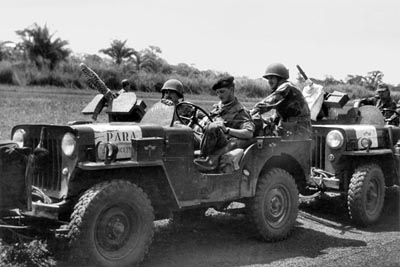 Another Para Group M606, named "Titine" on the armor in front of the driver. The gun is in this case mounted on the normal floor pylon in front of the passenger but is fitted with a thick steel shield. There seems to be a large storage box mounted on the front; also note the extra ammunition boxes fitted on the side. The text on the white air recognition band is red. Behind "Titine" is "Paula", seen above. (Photo via J-P Sonck) 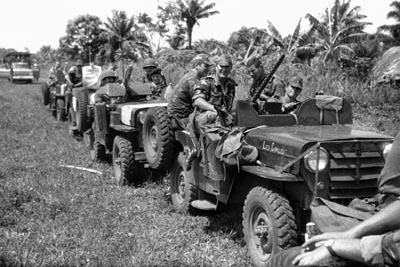 Also at Paulis, "Les Gorilles" was the Jeep of the unit commander Bob Noddyn, seated behind the machine gun. The armor is in this case not a single thick slab, but rather a sandwich design of thinner plates: a construction method that was to became the norm in the Congo. The M606 also has slats mounted on the front, to protect the radiator, plus a metal frame to push aside minor road blocks. Note the next Jeep in line, which has a gun shield of another design than seen in previous photos. (Photo via J-P Sonck) 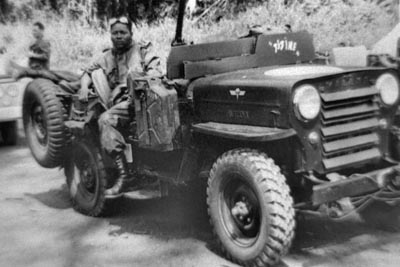 A later Jeep of the same unit and a successor to the original "Titine". The armor shield is a variation of the design seen above. Note also the peculiar, folded arrangement of the slats mounted on the front. Lt. Madwa seen here was one of the few Congolese officers of the group. (Photo via J-P Sonck) 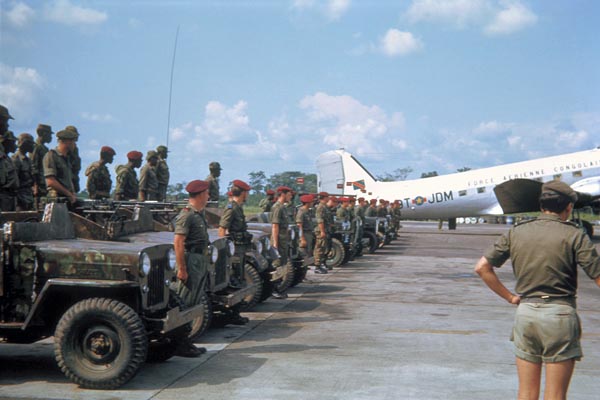 The Special Para Group drawn up for review at the airport in Stanleyville on February 5, 1965, by General Mobutu who is arriving in his personal VC-47 transport. The group had by this time reformed with largely new equipment and personnel. It received fresh Jeeps converted at the CFL railroad workshops in Stanleyville. The armor design seen here consisted of two steel plates with a filling of compacted cotton to absorb any bullet fragments. Two of the Jeeps are CJ-6s (one with a recoilless rifle) and some of the M606s have slats over the radiator. The Jeeps have also been given camouflage paint. (Photo © Jens Jensen)

By 1964, the ANC still had some M8 armored cars left over from before independence and had also inherited various wheeled armored vehicles from ONUC when it disbanded. But there were no armored units, only some armored cars scattered throughout the organization. The real armor units of the ANC during the Simba rebellions were two platoons originally set up for the Ommegang operation to retake Stanleyville. Afterwards, these and an additional platoon formed a loose armored company under 6 Commando and operated in northern Congo for a time in late 1964 and early 1965. The company included a motley collection of vehicles, including some armored Jeeps. 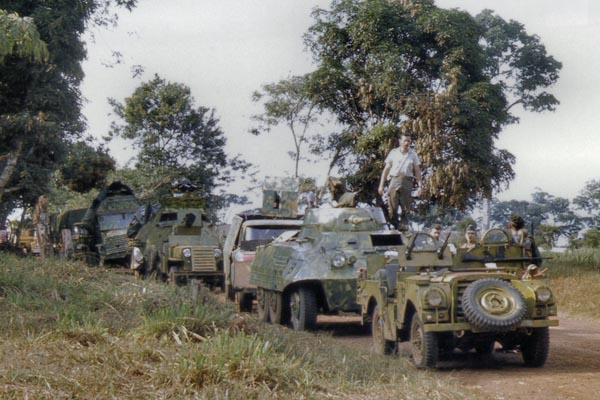 The Bero Platoon drawn up near the Kinduat Mission in the early months of 1965. This was expanded from the earlier platoon commanded by Lt. Bero (see above) and operated in the Paulis area for a time in 1965. At the front is a Minerva recce vehicle and an M8 armored car, followed by an incredible mix of more or less armored vehicles.

Fourth in line is an armored M606 (120K JPEG) with some unique design features, as seen in the photos below. (Photo © Charles Vingerhoets) 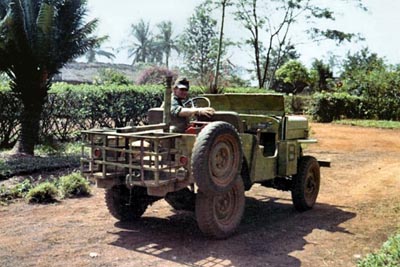 The same M606 shown above, or else a very similar one. The green "B" shows that it belongs to the Bero Platoon. Note that the Jeep is higher than usual and has obviously been "jacked". The bin at the rear is a standard modification but there is also a smaller box fitted behind the front wheel. The gun pylon is further back than normal and is fitted with a boom for a seat. (Photo © Marc Carlier) 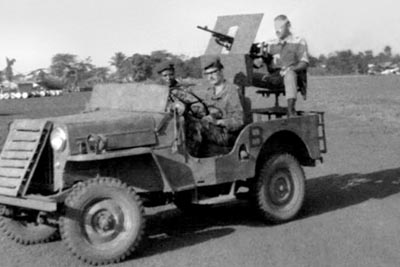 Once again likely the same Jeep, by this time in service with the UDA airfield defence unit at Paulis although retaining its Bero Platoon markings. The unique, swivelling seating arrangement for the gunner is clearly visible, and also the shield for the FN MAG machine gun. Note that the shield behind the hood seems to be in two parts and may be folding, at least the section in front of the driver. The armor at the front is also of a unique design, consisting of two plates with spacers in between. (Photo © Fred Delaunoy) 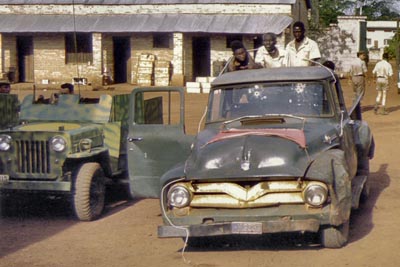 An old, beat-up -- and shot-up -- Ford pickup with civilian plates next to another one of the Armored Company's modified M606s in early 1965. This Jeep is one of the few that were given a more extensive armoring, likely as a command vehicle since there is no gun pylon visible, and has both steel doors and side armor fitted. Also note the small hinged plates in front of the doors. Two of the Congolese men on the pickup appear to be prisoners and have a rope around their necks, that can be held by someone sitting in the cab. (Photo © Charles Vingerhoets)

There were of course other users of armored M606s in the Congo during the 1964 to 1967 period, particularly 1 Choc (see Part 12). The great majority were used by mercenary units, however, particularly those coming under the umbrella of the French-speaking 6 Commando, while the English-speaking 5 Commando seems to have preferred using M151 "MUTTs" (see Part 17). But small numbers also found their way into other ANC units and the following are only a few examples of these. 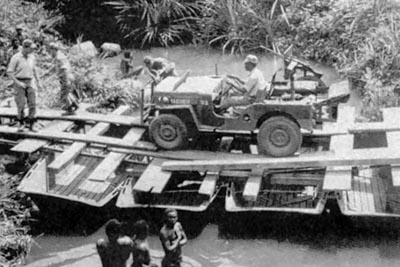 An M606 of 14 Commando, which was made up of former Katangese soldiers. It is similar to several of the Jeeps shown above and in Part 10 but with a few detail variations. There is no shield immediately in front of the driver but instead there is a low piece of armor fitted to the hood. The FN machine gun also has a shield and there is a "roadblock buster" fitted on the front. 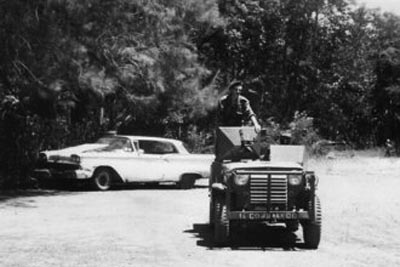 An image from The Overvalwagen Forum of another M606 of 14 Commando, showing a neater armor arrangement than on most other Jeeps, and one that also seems to protect the crew better.

An additional image shows the rear end (70K JPEG) of the same or a similar Jeep. 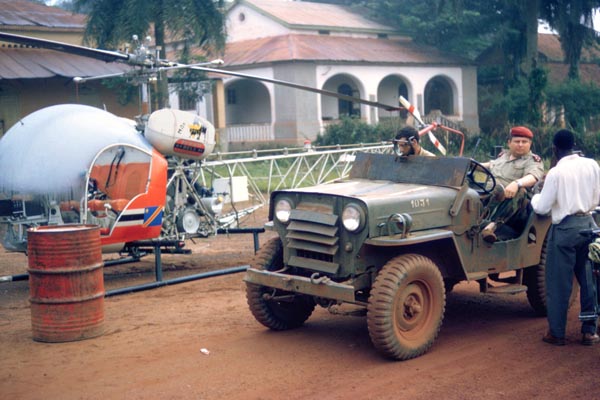 A final example is this Jeep seen in Buta (see the Congo map) in 1965 or 1966. The slats on the front are poorly fitted and the armor shield also looks clumsy, with a couple of large welds on the far bottom side. The most interesting point is the large transport lock on top of the shield, which indicates that the Jeep sometimes had a recoilless rifle fitted.

This particular vehicle belonged to 1 Choc, covered in more detail in Part 12. The Bell 47 behind it belonged to the CIA air unit and was used for medevac missions. (Photo © Bob Houcke)

Continue to Part 12: Armored M606s of 1 Choc or return to the Table of Contents.