The Second World War put an end to the facist governments of Italy and Germany, but because autocratic regimes in Spain and Portugal had not declared war on the Allies, they remained in power into the mid-1970s. 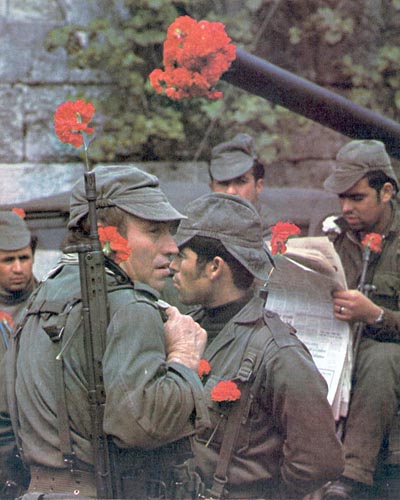 The end for Portugal's Estado Novo dictatorship came on 25 April 1974 when a group of officers known as the MFA (Movimento das Forças Armadas or "Armed Forces Movement") orchestrated a military coup which is often referred to as the Revolução dos Cravos ("Carnation Revolution.")

This photo is one of the most famous pictures of that day, showing in full color the origin of the name, as soldiers overthrowing the government put red carnations in their gun barrels, and very few shots were fired. Much of the population took to the streets of Lisbon to celebrate the end of the dictatorship and the end of the unpopular war in Portugal's African colonies, which had gone on for more than a decade.

(For more on the Portuguese Colonial War, see Army Adapts to Guerilla War, 1961. And twelve years later, the soldiers and CJ-3Bs were still there -- see Jeeps at War in Angola.) 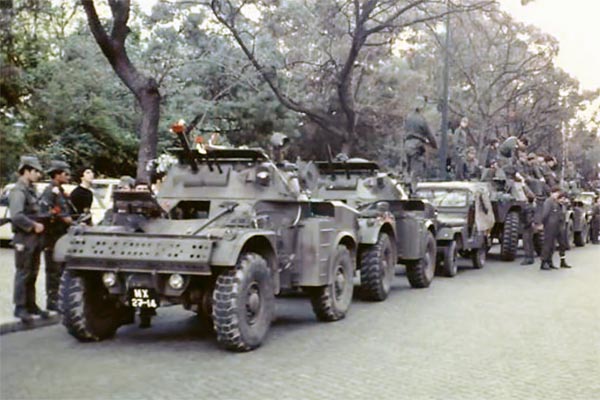 An important early supporter of the MFA was the Army's Cavalry School at Santarém, northeast of Lisbon.

In 1974 the Cavalry School had a squadron of the Panhard AML-60 armored cars Portugal had bought from France in the 1960s for convoy escort duties in the African colonies (Wikipedia).

The AML-60s were armed with mortars and machine guns (seen here in Lisbon with carnations in the barrels) and proved to be a decisive factor in the coup. The officers were in Jeep CJ-5s. 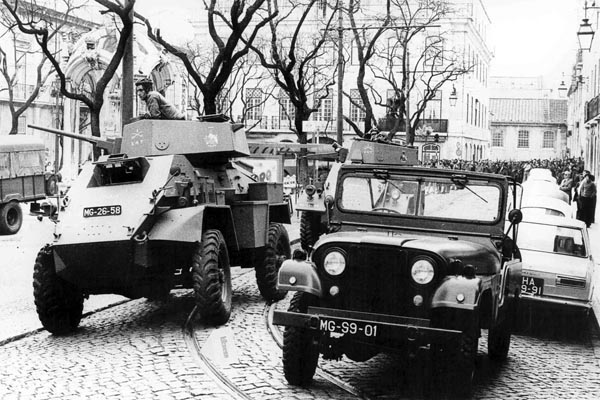 The army used a fairly stock export version of the CJ-5, seen here with a couple of World War II-era Humber Armoured Cars, as the MFA laid siege to the headquarters of the Republican National Guard (Guarda Nacional Republicana or GNR) in Largo do Carmo Square, with a large crowd watching in the background.

The 37mm gun on the Humber was too small to be efffective against modern tanks, but it would have been intimidating outside the front door of the GNR barracks. 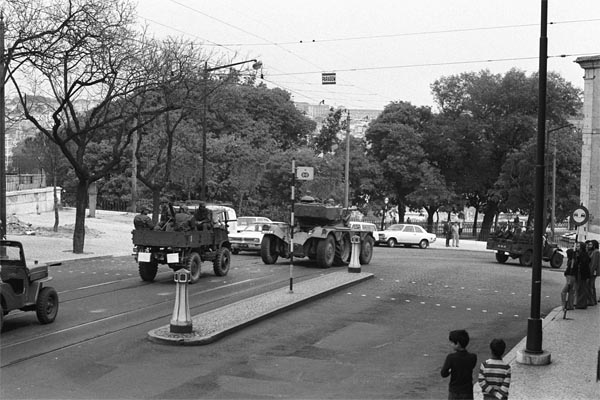 One of the photographers out on the streets during the day was Mário Varela Gomes, an architecture student at the time, who later became one of Portugal's most prominent archeologists. He grabbed this shot of a Republican National Guard column moving into position for a potential counter-attack against the MFA. A Panhard EBR armored car is followed by a mortar in the back of a Unimog, and a Willys CJ-3B. He also spotted a column of GNR Land Rovers (300K JPEG). 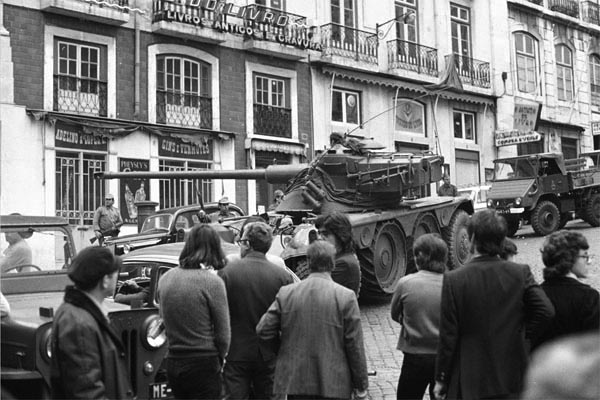 The MFA also had some of the Panhard EBR 8x8s, built in France starting in 1954. The Portuguese Army used them in its wars in Africa, and this one is moving to seal off Largo do Carmo Square from any GNR counter-attack.

The EBR was symmetrical, with driver's positions at both ends. It could reach speeds of 100 km/h (60 MPH) on eight large wheels with tires featuring a series of nitrogen-filled cells to absorb bullets (Wikipedia).

Photo taken by Mário Varela Gomes between 2 and 3 PM on Thursday, 25 April. 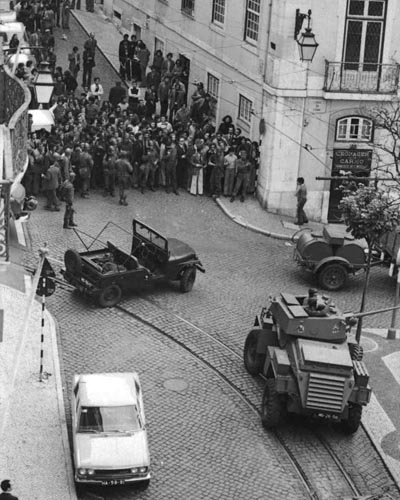 Despite repeated appeals broadcast on radio by the Movimento das Forças Armadas, asking the population to stay home, thousands of Portuguese descended on the streets, mixing with the MFA soldiers.

Here, troops hold back onlookers just outside Largo do Carmo Square. Their CJ-6 has had its canvas top shoved in the back, with the bows still up. Heading into the square seems to be a fire department water trailer. And before long the crowd has filled the square (350K JPEG) in front of the Republican National Guard compound, where they have found out Estado Novo dictator Marcelo Caetano is taking refuge. 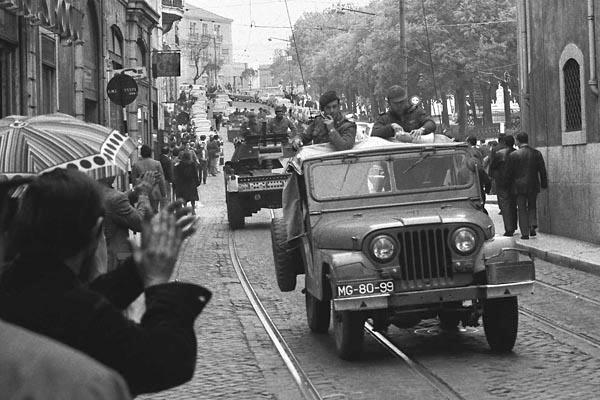 The hero of the siege of the GNR barracks was Captain Salgueiro Maia of the Cavalry School, who ordered the armored cars to fire on the front of the building to force negotiations.

Captain Maia is seen here with his bullhorn, following the surrender of Marcelo Caetano, and is getting applause from onlookers along Rua de S. Pedro de Alcântara. His export CJ-5 has interesting add-ons including some distinctive blackout parking lights. 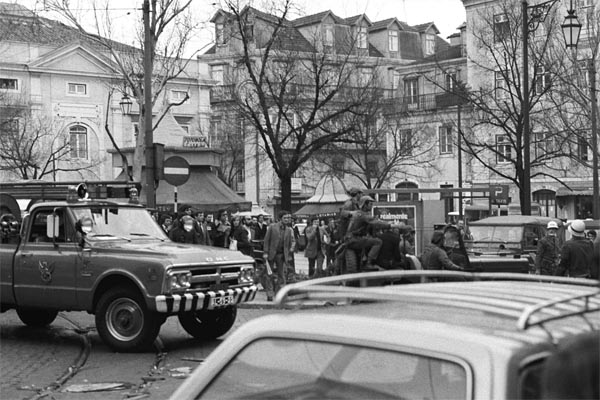 Meanwhile, on Rua António Maria Cardoso there was a similar siege at the Lisbon headquarters of the DGS, the government's secret political police. However, in this case members of the DGS fired on the crowd surrounding the building, killing four people.

Troops are seen here on their way to the DGS in a CJ-3B (unfortunately mostly hidden in the photo), followed by the bombeiros in a GMC 4x4. 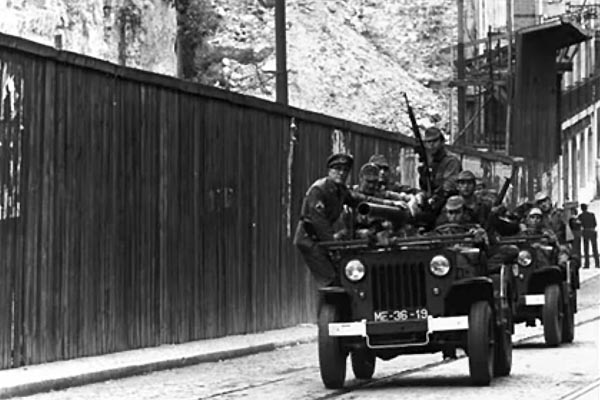 With armor fielded in the city streets by both the MFA and forces loyal to the Estado Novo, some maneuverable anti-tank Jeeps were a potentially important weapon, just as they would turn out to be a few months later in the Turkish Invasion of Cyprus.

In this photo CJ-3Bs with 106mm recoilless rifles, from one of the units supporting the MFA, are racing up Rua do Alecrim, also heading for the DGS secret police headquarters one block to the east. 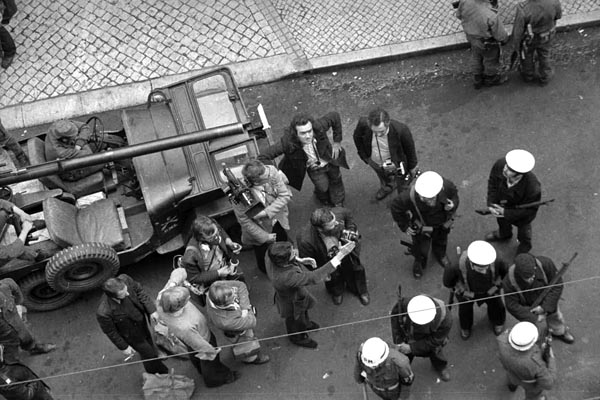 Here's an unusual view of one of the 3Bs, as a group of journalists talk to sailors and Military Police in the Rua António Maria Cardoso, following the surrender of the DGS. The Portuguese Navy had joined the coup late in the day on the 25th, and its armed sailors were instrumental in forcing the surrender. (Wikipedia) 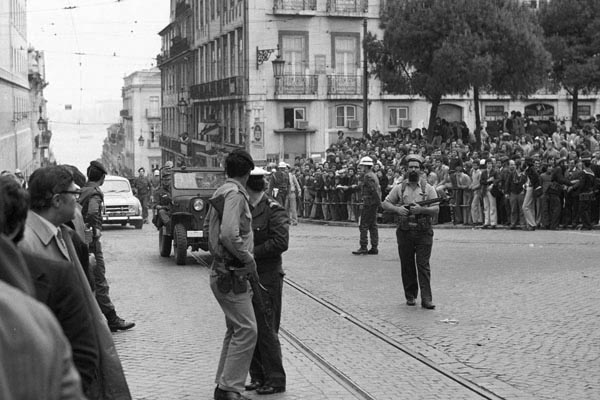 On Friday, 26 April, the day after the coup, crowds are reportedly waiting to see the arrest of members of the hated DGS, some of whom are taken away by MPs in Land Rovers (260K JPEG).

Personnel from various units of the military, including a sailor, keep an eye on the crowd in Largo de Camões square, as soldiers drive through in a CJ-3B. 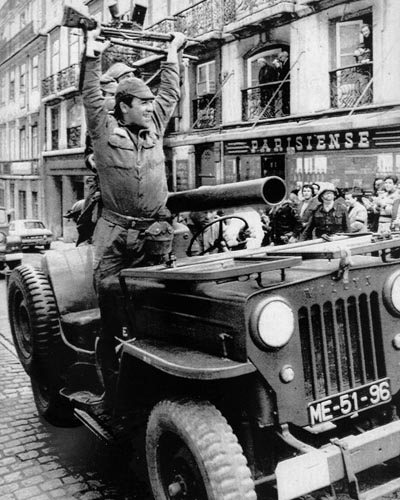 A group of triumphant soldiers celebrates as their 106mm Jeep arrives at the square. The CJ-3B is equipped with a modified M38 windshield, supplied in a kit with the gun mount (M201.com).

The driver, his view obstructed by the recoilless rifle barrel as he turns into the square, seems to be trying to avoid hitting the unknown photographer.

This is a press photo from the collection of Fundação Portimagem. 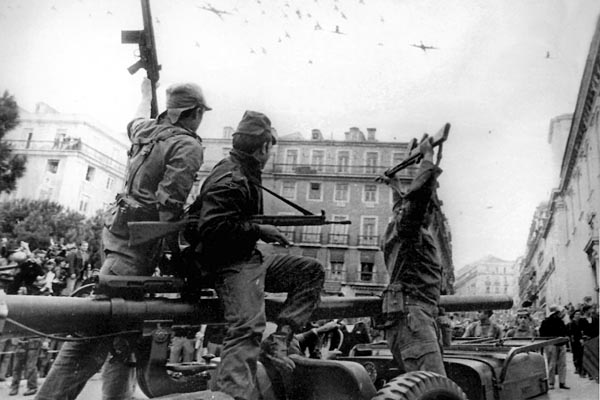 A photo found in a different European archive appears to be another shot taken moments later by the same unknown photographer, as the Jeep passes by.

What looks like a flotilla of aircraft overhead is actually the trolley wire above the street, which can be seen more clearly in the wide view of the square, above. 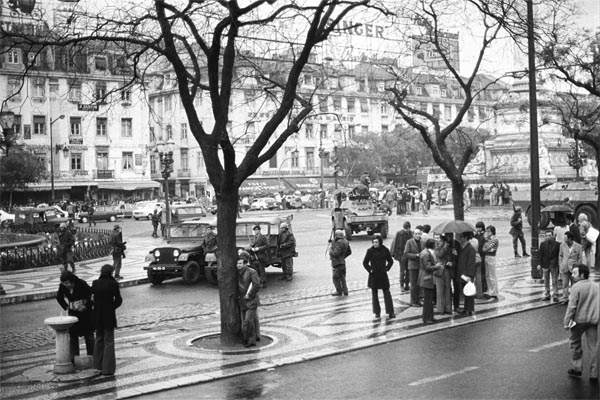 One of the final photos of the Carnation Revolution taken by Mário Varela Gomes, shows Dom Pedro IV Square in Lisbon the following day. The light rain appears to have dampened celebrations, but normal life is returning to a very different Portugal. Within months, the DGS, the GNR, and the Portuguese Colonial War will be history.

MFA troops, with the canvas up on all their CJ-5s, are still keeping a wary eye open, but the events of the previous day will become recognized as one of the neatest, least violent and most successful military coups of the twentieth century.

Thanks to Federico Cavedo for his research, and Casa Comum for the photos by Mário Varela Gomes and Carlos Gil. I would be interested in any information about the images whose photographers are unidentified. -- Derek Redmond