Many Portuguese were unhappy with their country's lengthy war against rebels in Angola from 1961-74, just as there was strong anti-Vietnam War sentiment in the United States at the same time. The dissent eventually led to Portugal's withdrawal from Africa, and independence for its former colonies. But a major difference was that the Portuguese Army had pretty well won the war by then.(1)

A 2012 article in the Canadian Military Journal points out that although "Portugal's counterinsurgency operations in Africa offer an exceptional illustration of a successful adaptation of a Western army to irregular warfare," the success has been largely ignored, while analysts study French operations in Algeria, or the American involvement in Vietnam. The authors mention various factors which helped make the Portuguese Army successful, including participation in social and economic development, recruitment of the local population, and reorganization into small, mobile infantry units.(2)

These techniques are also among a list of "Best Practices in Counterinsurgency" in a 2005 article in Military Review which does not look closely at Angola, but does list the war among 51 guerilla wars of the 20th century which were studied.(3)

Part of what allowed the Army's small infantry units to operate in the rugged terrain of northern Angola, where rebels initially came across the border from Republic of Congo to raid small communities, was having plenty of Willys Jeeps. The photos here are courtesy of 4a Companhia de Caçadores Especiais (4 CCE), a website documenting the deployment of the "4th Special Rifle Company" in the area from 1960-62. 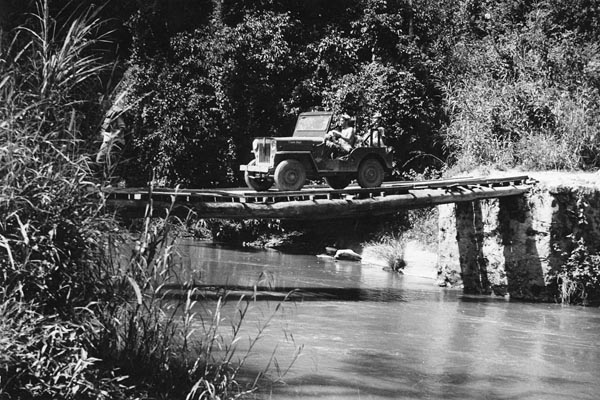 Near the northern tip of Angola, the Rio Lué flows through the Serra do Congo mountains, into the Congo River, the world's deepest river, which forms the northern border of the country. See a 1960 map of Angola (560K JPEG).(4)

There are of course different ways of getting across a river. A log bridge is pefect for 4 CCE's little Willys Jeeps.

If there's no bridge, 4 CCE is trained in quickly building a raft (see a photo from the Rio Bengo, 170K JPEG). 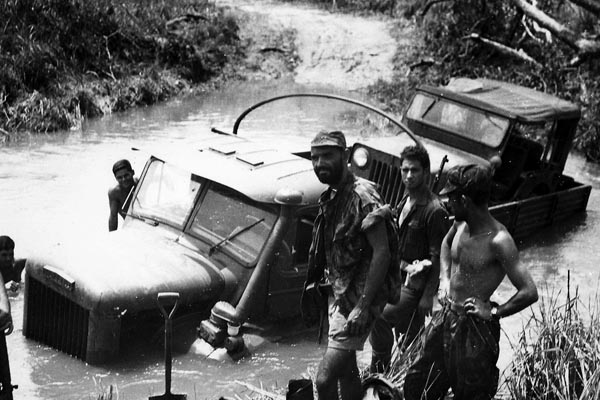 A log bridge is risky for a 5-ton truck, and if you're going to try to ford the truck, a Jeep might as well hitch a ride.

Unfortunately, this truck slips downstream into soft mud, and 4 CCE has a few laughs at the driver's expense as they figure out their strategy for pulling it out. 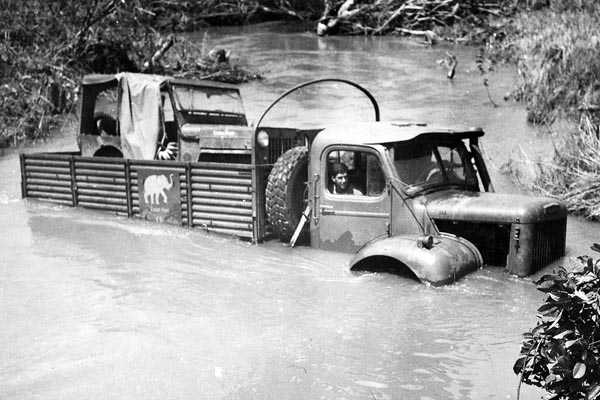 4 CCE was part of the Infantry Regiment of Luanda (RIL), headquartered in the capital, Luanda. The elephant insignia indicates one of the regiment's transportation companies, providing the ride on this day. The various Companhias de Transportes are indicated by color: CT 335 is a yellow elephant, 336 is white, and 337 is blue. 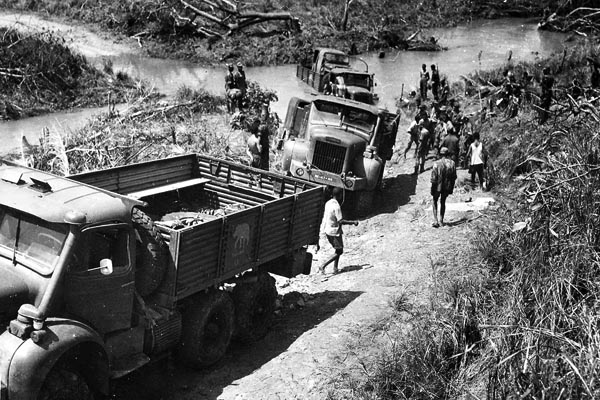 The trucks are the French-built Berliet model GBC8, a 5-ton 6x6 which was also known as the Gazelle.

Elsewhere on the web, see some remarkable color photos of a 1960 Berliet caravan across the Sahara from Algeria to Chad. 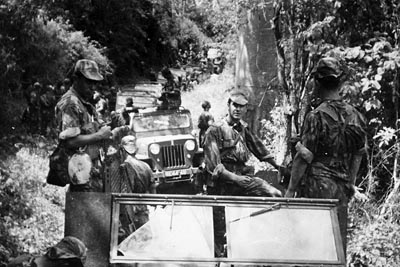 Frequently 4 CCE's units are on the move with fewer trucks and more Jeeps. On this mission near Rio Bengo (see the map, 560K JPEG), the lead Jeep has had some steel plate added as protection from potential ambushes; a rear view photo also shows the armor. The Jeep, with broken glass in the split-pane windshield, appears to be a CJ-2A. 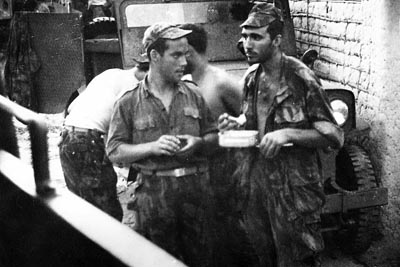 Armor has also been added to this CJ-3B, in the form of steel plate doors and sides, and over the bottom half of the windshield. 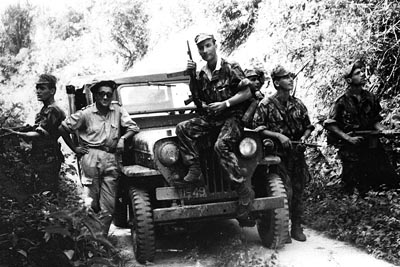 This Jeep has a blackout lamp on the left fender, so it's possible that it's an early Kaiser M606. Some of the soldiers here carry the Portuguese FBP 9x19mm submachine gun, and others have the NATO FN FAL 7.62x51mm automatic rifle.

This photo is by A. Camposana. All of the photos here are courtesy of 4a Companhia de Caçadores Especiais. 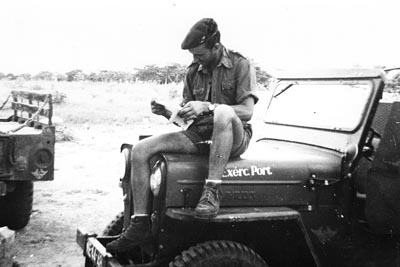 Reading mail at Catete, outside Luanda. "Exérc. Port." on the hood is the abbreviation of Exército Português (Portuguese Army). Further down on the cowl is the 4 CCE insignia: 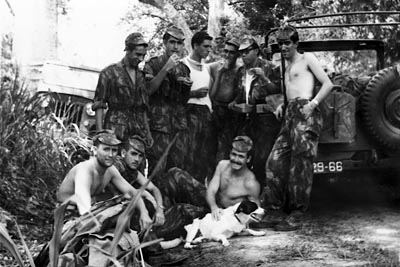 A pause for some chow and a chance to play with 4 CCE's mascot "Maholo," gives us a look at the rear of one of the CJ-3Bs, with tailgate-mounted spare and jerry can. 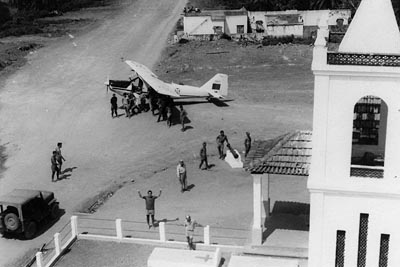 The same tailgate arrangement is visible on a Jeep meeting this Portuguese Air Force Dornier Do 27, at the airstrip in Nambuagongo (see the 1960 map of Angola, 560K JPEG) The town had been destroyed in one of the early attacks by insurgents, and with the Army's assistance was rebuilt quickly, including the water tower (140K JPEG) from which this photo was taken.(5) This kind of development work helped keep much of the population from turning against the Army. 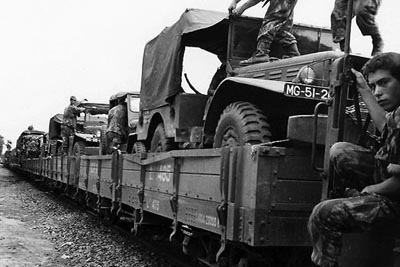 Equipment like Jeeps and Dodge trucks moved from the port city and capital Luanda, into the interior on the Luanda to Malanje Railway (see the map, 560K JPEG.) This photo courtesy of 4CCE.org was taken on 19 March 1961.

When the 1975 independence agreement between Portugal and the Marxist MPLA party became known to the public, a mass exodus began. Over 300,000 people left Angola by November, and the Angolan Civil War started to spread across the newly independent country. The devastating civil war lasted until 2002 and claimed over half a million lives.(6)

Would things have been any different if Portugal had simply given Angola its African colonies independence in the 1950s, as the Netherlands had done with the Netherlands Antilles? (See Jeeps on Saba Island on CJ3B.info.) Not likely; there were competing political and military factions supported by the Soviet Union and the West, and civil war would likely have broken out even sooner in Angola, as it did in the neighboring Republic of Congo. (See Military Jeeps in the Congo on CJ3B.info.)

Willys Jeeps were often on hand to witness the worst and the greatest moments in 20th-century human history.

Thanks to Federico Cavedo and to 4a Companhia de Caçadores Especiais, a website which, like CJ3B.info, has been online since 1996. -- Derek Redmond

See also Jeeps at War in Angola and The Blue Caps: French Jeeps in Algeria, 1957.