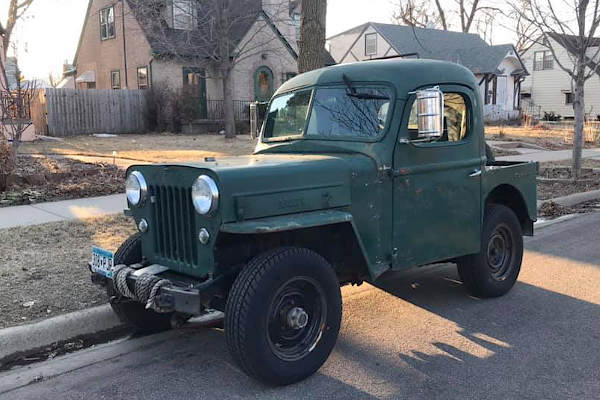 Nice job here of slipping this 1950 International truck cab onto a body that is otherwise stock Willys. The cab was reportedly never used prior to being installed when the 1957 CJ-3B was new. The truck also has upgrades including a 25-gallon fuel tank in the back. 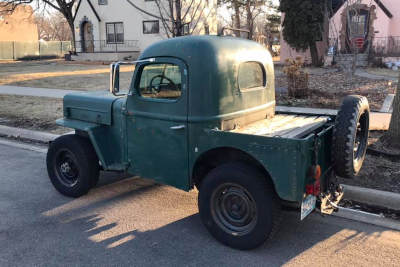 Jim Nicholson originally sent a photo from Montana (90K JPEG) in the 1990s, and the engine at that time was a 1965 F-head. Spencer Lee Robertson spotted the truck in Minnesota in 2020 and took these photos. 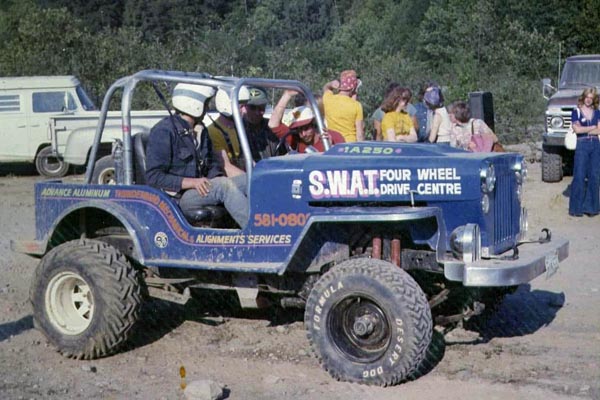 Room for a bigger engine is often the reason behind new bodywork on a Jeep. Not sure what was in this CJ-3B built for the west coast drags, but there's room for almost anything. This photo looks like the 1970s, but as of 2018 Glen Morrow's S.W.A.T. ("Specialty Work All Types") Four Wheel Drive Centre is still building trucks on the Fraser Highway in Surrey BC. Photo via Vintage Four Wheel Drive Canada on Facebook. 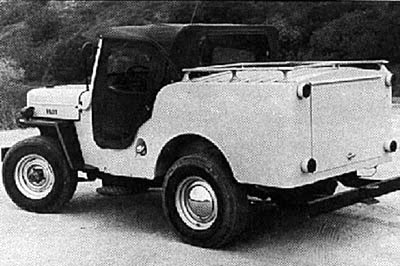 In an article called "Old Iron Never Dies" in Off Road magazine, November 1984, John Lawlor wrote, "If you're more than 30 years old, you may have seen some of these auto club Jeeps in action on television. They were used during the New Year's Day Rose Parade in Pasadena, standing by to tow any floats that had problems running under their own power."

The article profiled a 1961 CJ-3B (right) originally built for the Automobile Club, and owned by Roger Olkowski. Lawlor wrote, "The club, which is an affiliate of the AAA, once maintained a fleet of such Jeeps to assist stranded motorists with roadside repairs, and the body was designed to carry a supply of tools and parts." 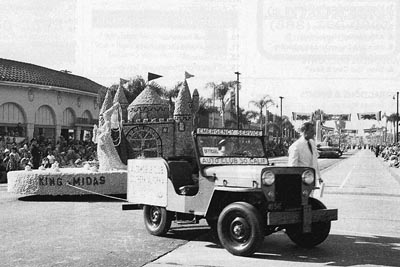 This archival photo in the January 2014 issue of Westways, the magazine of the Automobile Club of Southern California, shows an Auto Club CJ-3B with a towrope pulling a disabled float around a corner in the 1956 Tournament of Roses Parade in Pasadena CA. Thanks to Warren Newbury and to Bryon for spotting this photo. 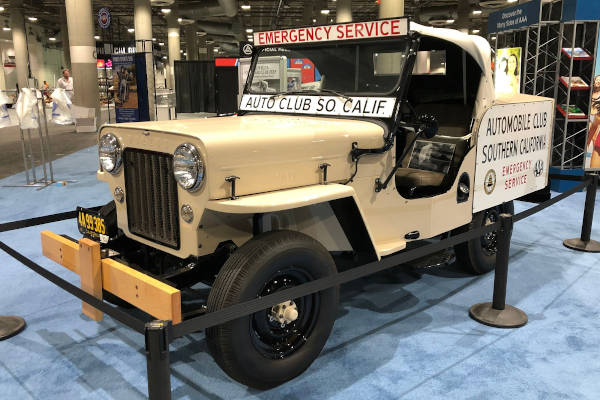 A recently restored example of the Auto Club CJ-3Bs was photographed at the 2019 Los Angeles Auto Show by Germain Goyer for Le Guide de l'auto. Gives a good look at the vertical block in the center of the front bumper; what was the purpose of that?

See the Jeep participating in the 2018 Rose Parade, in Everybody Loves a Parade on CJ3B.info. 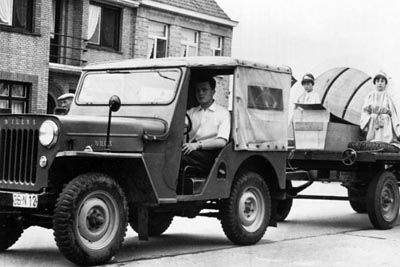 Here's a more modest parade, in Schalmen, Belgium in 1957. Jan Hogendoorn found this photo of a 3B with the door openings enlarged, and panels added to mount full-length doors. Photo courtesy WesthoekVerbeeldt.be. 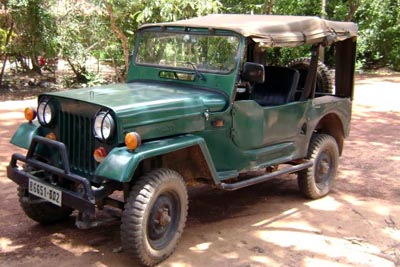 Stretching a Jeep body to make the door openings wider is another interesting idea. Probably more work than the more common stretch in the rear, but it might provide extra legroom and steering wheel clearance as well.

This photo taken by P. McCoy in Cambodia was popping up on blogs around the web in 2011, with people speculating about where this long-wheelbase Jeep may have been manufactured. Well, the front bodywork looks like it might be Mitsubishi, but from the windshield back (90K JPEG) it's clearly Mitsu-bashy. 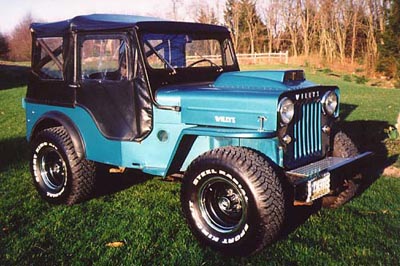 In addition to the scoop, other visible details include the original heater vent on the side of the cowl, and the chrome bolts filling the holes where the spare was mounted. 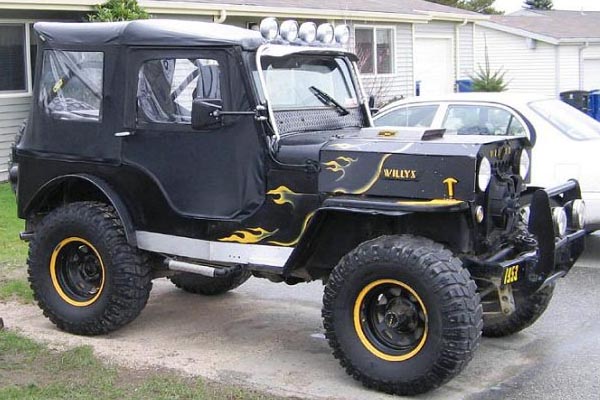 Linton Lee Wibble built this rig in 2001 while stationed in Hawaii. He bought a '53 3B with 4 flats, no brakes and an engine that didn't run, for $250. After adding a few ignition parts and a Holley carb to the Chevy 350, and a 2-1/2" shackle lift to clear 33 x 12.50 X-terrain tires, he gave it a new Tiger Top and a rattle can paint job. No word on whether Linton or the previous owner fabricated the hood, but it gives the Jeep a high-tech look. 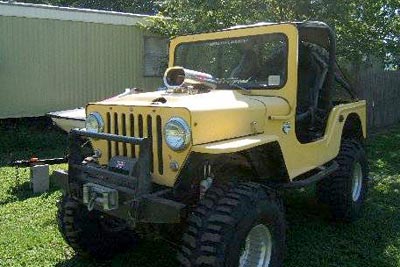 Rick Johnson in Washington state built this whole body out of fiberglass, so it has a few distinctive features, but the most obvious is the hood, designed to fit around a blown 302. There's a link to his project photos from my Links page.

See another hood scoop in CJ3Bs in the Sand. 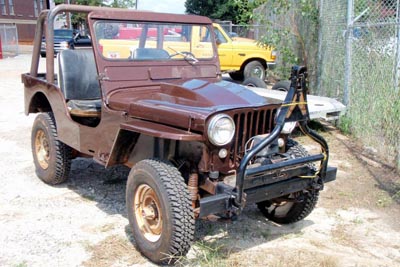 Andy Goldsmith in South Carolina sent the story of this project in 2008: "I had a home grown mess of an 'air scoop' on the hood of this CJ-3B with an earlier (I believe CJ-3A) body. I ordered this cowl scoop (120K JPEG) in metal from The Speed Center for $150, with $25 shipping. It is 4-1/2 inches high; they make a 3-inch model, but I thought torque twist might cause problems. The 3 would have looked nicer, I think. The scoop comes about 55 inches long, but it is simple to cut it to length. It has a flange for MIG welding, and the result looks pretty good and it stiffens the hood quite a bit as a side bonus.

"I saw several attempts at scoops on CJ3B.info. A pretty good body shop encourged me to hunt for a metal, mail order scoop saying a custom one would cost more than I would want to pay. While at it I had Maaco shoot a quick and dirty paint job on the outside. Now I probably will do the same on the wheels, and use the POR 15 product for a flat black, brush on finish inside, and perhaps in the wheel wells. The former owner, 25 years ago, described it as a 1962 frame, engine, transmission, etc. with an older body on it."

Note: the right side view (120K JPEG) shows that the body has the right-side air vent for the post-1959 fresh-air heater, so it's likely a DJ-3A Dispatcher body rather than a CJ-3A. 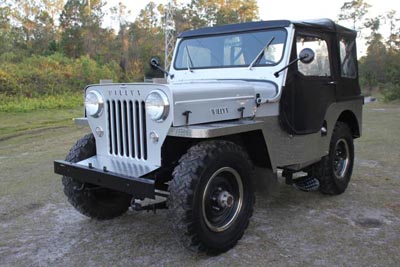 I don't know who owns this one now, but it has to qualify as unusual bodywork. Looks pretty stock except for the beautiful stainless steel front fenders and side panels. Underneath the stainless it's a 1954 CJ-3B -- see more details in Work and Play, Then and Now on CJ3B.info. 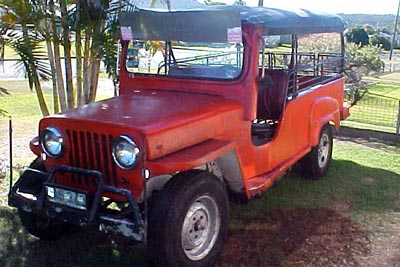 Many early jeepneys in the Philippines were basically just stretched CJ-3Bs.

Ivan Schuurs in Australia wrote, "I purchased and imported this jeepney into Australia. It is a an authentic passenger Jeep used for private purposes and therefore is not decorated. This is believed to be one of two in Australia. It can be fully registered in Australia with a few modifications."

See also Jeepneys of the Philippines for some of the decorated ones, and Building a Jeepney for the story of one imported into the U.S. 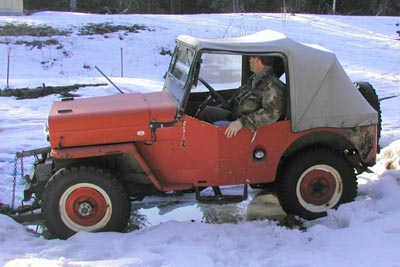 On the other hand, this fastback top and half doors make for a sporty CJ-3B if you don't need to carry a crowd. Mike Holness of Minden, Ontario was wondering about the origins of the soft top on his 1959 Jeep, commenting that "I haven't seen anything like it in pics on the Web."

Well, I think the place to look is probably The Dispatcher Jeeps page because this ragtop looks to me like the convertible top that was available for the DJ-3A Dispatcher. 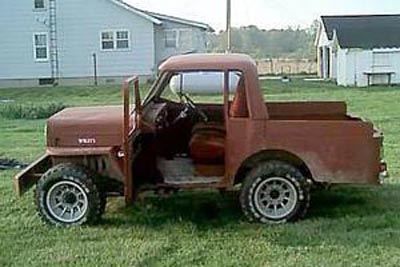 Here's another '59 with a one-of-a-kind top. Owner Michael Galyen wrote, "I have just bought a 1959 Willys. I am extremely confused as to what it actually is. I got it from the 2nd owner and it is supposed to have all original parts."

Well, the parts were originally from somewhere, but I don't think most of them were on this Willys in 1959. 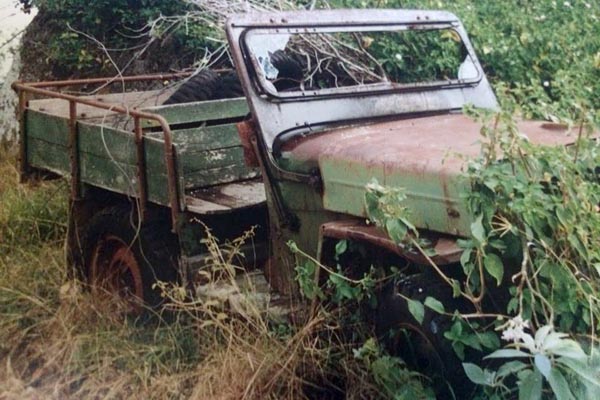 Another approach to turning a 3B into a truck. This is what is referred to in Australia as a "ute" or utility. Distinctive touches on this one include the "bench seat" and the rakish windscreen angle. It was spotted by Miran Hunzicker on his travels. 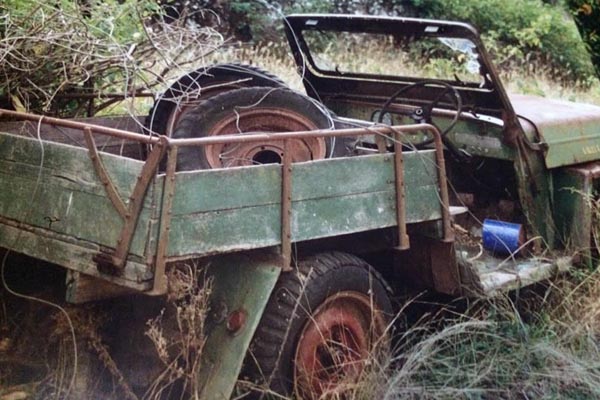 It appears to have originally been one of the 1958 CJ-3Bs not only converted by Willys Australia to right-hand drive, but also with the wheelbase lengthened into what they called the CJ-3BL.

Also on CJ3B.info, see other rare Jeep bodywork in Jeep Designers at Work.