Jeepneys of the Philippines 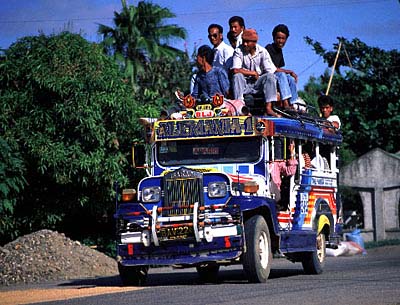 The "jeepney" is the Filipino version of the "jitney," the taxi/minibus that travels along a fixed route, found in many countries. These stretched jeeps/buses were originally built from WWII surplus jeeps. Many of them now have a high hood, although the front grille may not be much like a CJ-3B, as seen in Eddie Foronda's photo of a well-loaded jeepney. 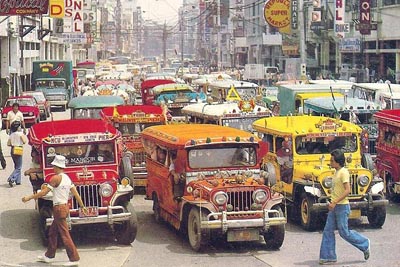 The government had been planning to reduce traffic congestion and pollution by banning all jeepneys over 15 years old in 2018. Then in the face of widespread public opposition, the Department of Transportation announced in December 2018 that it would only force about 220,000 of the country's 600,000 jeepneys off the road, those which do not meet pollution or safety standards. However, this is likely to affect many of the older jeepneys, such as those seen on this old postcard. 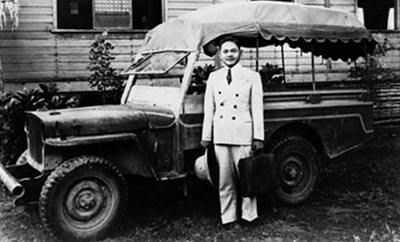 Jon Paulsen, who lived for five years in the Philippines (and bought his first Jeep there) offers these observations:

"The original jeepneys were stretched MB's (right). I suspect many, if not most, of them are still on the road. When I was there, a friend was buying one for his father-in-law, so he could be self-supporting. He said it would cost $20,000 for a used one in decent shape. The extremely high vehicle prices there, coupled with very low labor costs and poverty, make any heap worth rebuilding. No such word as 'totalled'!" 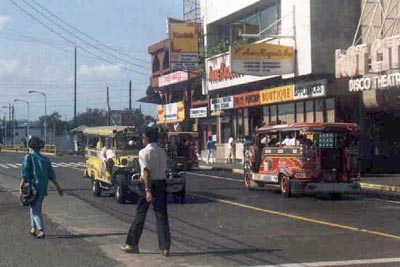 "This Jeepney shot was taken in the 1980's right outside the main gate of the old Subic Naval Station, on Magsiasia Drive, the street that was said to have more bars and clubs than any other in the world!

"See also a shot on Rizal Avenue (60K JPEG), the street said to have the second-most bars. These two shots would bring tears to any real West Coast Sailor's eyes.

"By the way, I often see the nomenclature misused. A 'jeepney' refers only to stretched versions. A normal length one would be called a jeepy, jeep or 'owner'." 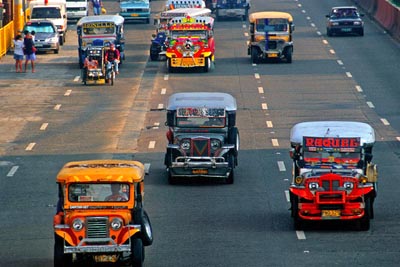 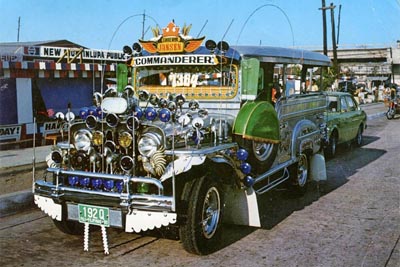 The "Commanderer" seen here in a 1980 postcard photo, is an example of the extremes of decoration used to attract attention and passengers.

Jon says, "The high hooded design, which most of the jeepneys use now, was probably adapted from the M606 (military CJ-3B), to provide more room for locally available engines. The jeepneys being manufactured there now are 100% Filipino-made bodies and frames. The largest manufacturer is a company called Sarao, located near Paranaque." (See Sarao Motors on CJ3B.info.) 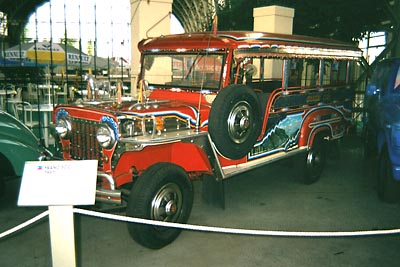 "I am told the stainless Jeep copy, complete with Toyota engine, is now a cottage industry in the town of Navotas. Often these are made in a small garage as a family business. Build one, sell one. They might make $2000 or 3000 a year and have no vehicle of their own (except maybe for the one that's for sale). Most are owned by the wealthy as a family car, by a business as a pick up truck, or most commonly by an individual who rents it to a driver who uses it as a taxi."

Some jeepneys travel a long way from home: Paul Seabury took this photo while touring "Autoworld", a classic vehicle museum in Brussels, Belgium. 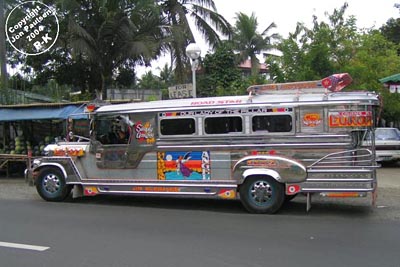 Thanks to Jon Paulsen for this overview of the jeepney. He was back in the Philippines in 2004 and says, "The jeepneys seem quite advanced since I was last there in the late 80's. Most are stainless or a hybrid of stainless/bare galvanized metal."