Although the concept of the Jeep Gala originated in Acapulco, Mexico (see Las Brisas: Birthplace of the Jeep Gala), the place which most people would probably associate with the pink resort vehicle is Hawaii. 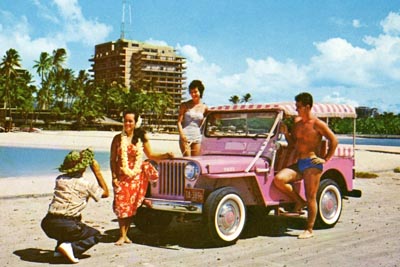 Hawaii is also the only place in the United States where the pink Jeep was sold as the "Gala" rather than the "Surrey." Willys Export Corporation developed the marketing plans for the Jeep Gala outside the limits of the continental United States. Places like Mexico, the Caribbean and Hawaii were targeted for sales. Even though Hawaii became a state in August, 1959, sales of the Gala there were handled by Willys Export Corp., while Willys Motors Inc. marketed the same Jeep under the Surrey name within the continental U.S. 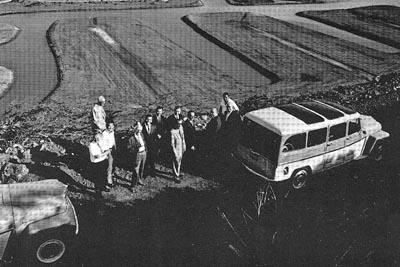 Henry Kaiser (far right in this photo) retired to Hawaii in 1954, shortly after Kaiser Industries bought Willys, and he became involved in tourism promotion and land development, including the large Hawaiian Village Hotel.

He had this custom pink stretched Willys station wagon built for exploring the island. As of 2018 this vehicle continues to be offered for sale unrestored (150K JPEG) -- see also the interior (220K JPEG). 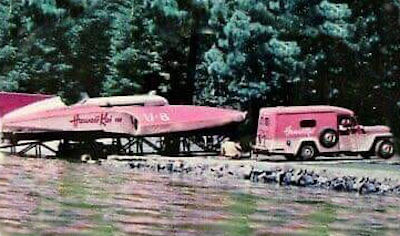 Henry and his son Edgar also enjoyed boat racing, and in 1957 in Seattle their hydroplane Hawaii Kai III set a water speed record of 195 miles per hour, which stood for five years. Aaron Feeney found this photo showing their tow vehicle, a Willys Ambulance painted in Tropical Rose and Coral Mist. Another photo (80K JPEG) reveals that the team also had a larger Chevrolet equipment truck in the same colors. 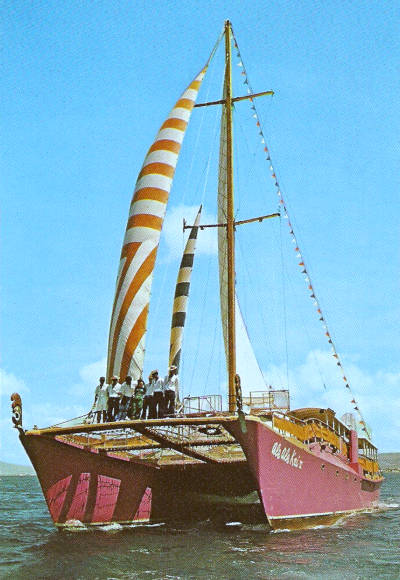 Henry Kaiser also owned a series of pink catamarans, some of which were docked in front of the Hawaiian Village Hotel. Ale Ale Kai V was 100 feet long, the world's largest cat when she was launched in 1957. Henry sold her to Robert C. Allen in 1958 (see more on Allen below) but for many years the steel catamaran kept her pink paint, and the singing crew would take tourists on charter cruises.

The back of this Pacific Film Corporation postcard says, "Daily Pearl Harbor Cruises... Day and Evening Charters... Sunset Dinner Sails with exotic Polynesian music and dancing off the romantic shores of Waikiki." 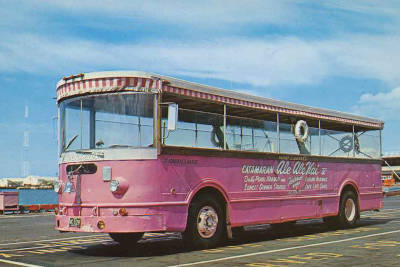 The pink bus which carried the charter trip customers from Waikiki hotels to the pier at Kewalo Basin in the mid-1960s had a Surrey fringe and its own postcard (courtesy Kamaaina56 Flickr Collection.) 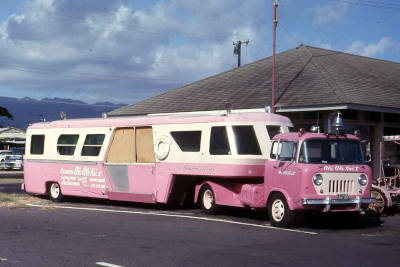 The same advertising for those Ale Ale Kai V cruises was on the side of this trailer pulled by a dual-rear-wheels Jeep FC-170, also with a mid-60s license plate. With all those windows, and the same nickname "The Admiral's Barge" as seen on the bus, the trailer had probably been another tourist shuttle. 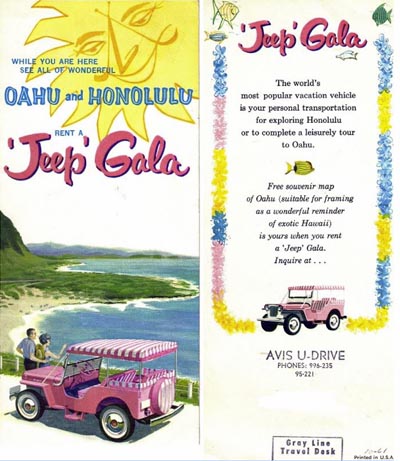 According to Creating Hawai'i Tourism: A Memoir by Robert C. Allen (2004, see Google Books), Henry's wife Alyce loved the color pink, and all of his construction machinery was painted pink. He even gave Alyce a pink Forward Control Jeep truck for Christmas (see December 1958 on CJ3B.info.)

So it might have been a "Hey, why didn't I think of that?" moment for Henry Kaiser when he heard about the pink Jeeps in Acapulco.

Robert C. Allen was President of Gray Line Hawaii and Avis U-Drive Corp., and in his book he recalls Henry Kaiser showing him a model of the pink Gala, and asking him whether he thought it would be popular as a rental. Avis soon had 50 in their fleet, and more would follow.

Willys supplied this brochure, which rental agencies such as Avis could use. Willys also tried to encourage agencies to announce the availability of the Gala, with a news release template (110K JPEG), a copy of which was found by Bill Norris in the Detroit Public Library. 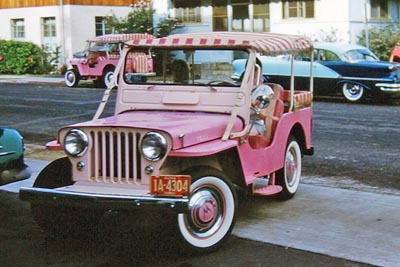 Robert C. Allen also claims he suggested adding the surrey fringe and the safety railings in the rear, although factory photos seen in Development of the Willys Jeep Surrey show that those features were already included on some of the early Gala prototypes.

The red license plate and the 15" wheels date the Gala in this photo (source unknown) to 1961 or earlier. 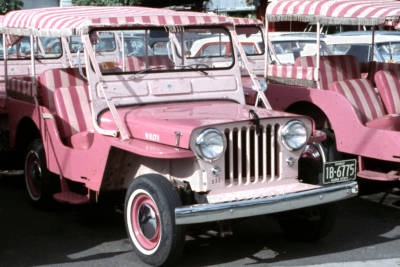 This photo courtesy of the Bancroft Library, University of California, shows rental Galas in Hawaii, possibly part of the Avis U-Drive fleet. The 13" wheels indicate a 1962 or later Jeep, and the green license plate dates from 1961 or later, with the phrase "Aloha State" reflecting Hawaii's newly achieved statehood. The red pre-1961 plate in the photo above says simply "Aloha." 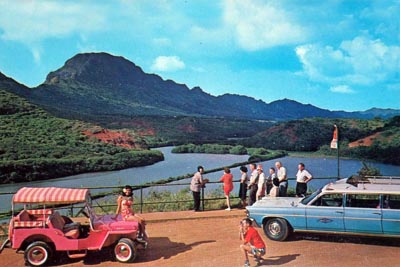 This 1964 postcard advertises Gray Line Kauai Tours and U-Drive. It's from the collection of the late Bruce Agan, who identified the Jeep as a 1963 model with 13" wheels and baby moon original hubcaps. The panel behind the front bumper makes it tempting to climb on the hood for photos.

Allen's book also describes how Gray Line pioneered the use of stretch limousines for sightseeing, and says their first "stretchouts" were Chrysler sedans from Armbruster & Co. in Arkansas (who later became Armbruster Stageway, and are still building custom limousines.) The station wagon seen here appears to be a Pontiac Catalina, which was one of Armbruster's favorite platforms (80K JPEG). 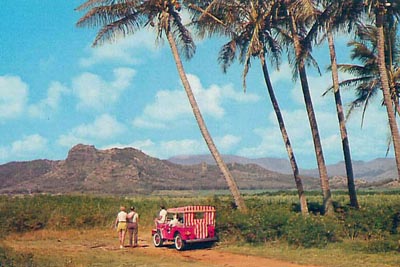 Gala Jeeps with somebody sitting on the hood make good props in the foreground of postcard photos. This undated one shows a Gala with the back curtain in place, in front of the Sleeping Giant, also known as Nounou Mountain, on the island of Kauai (see the other side of the postcard, 100K JPEG.) 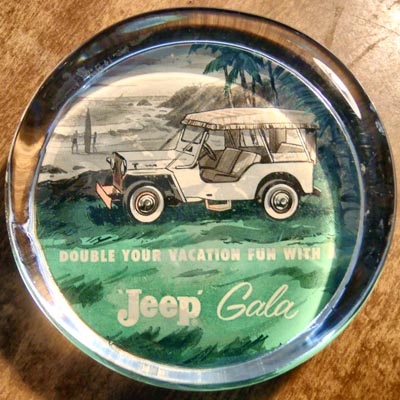 The Jeep shown has the early angled top bows similar to some of the Gala prototypes, and to the photo in the newspaper clipping headlined "New Jeep Galas Bring Rosy Hue to Islands' U-Drive Car Business" (Honolulu Star-Bulletin, 16 September 1959, 120K JPEG). 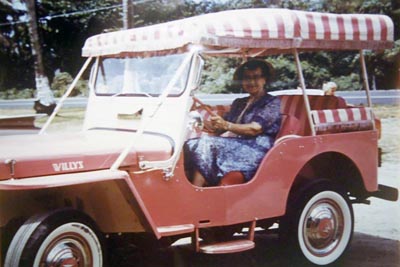 Evidence that some of those early Galas remained in rental service is provided by a snapshot of a lady in the driver's seat, date and source unknown. The Tropical Rose and Coral Mist paint scheme is the same as later Galas. 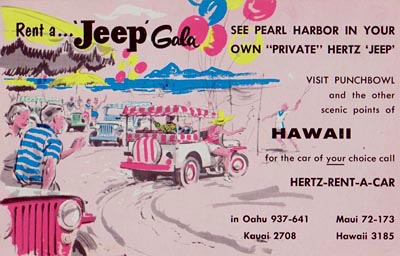 Hertz of course also got in on the trend. This Hertz postcard is based on an illustration (160K JPEG) from Willys' 1959 Jeep Gala Rental Plan brochure, but it's interesting that the artwork was modified to show Galas in all three colors. 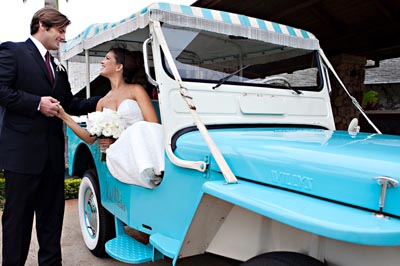 Demonstrating that some of the Galas which arrived in Hawaii were blue, and that at least one is still in service at a hotel as of 2013, is this photo by Evonne and Darren Photography, taken at Hotel Wailea, a boutique hotel on Maui. 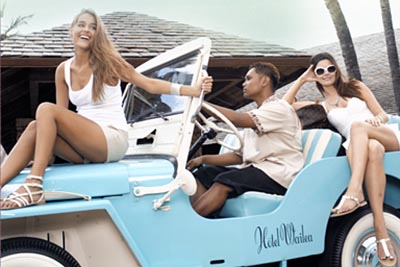 Up on the hood again -- maybe Willys should have given the Gala some reinforcement to protect those Weak Points in the Flatfender Hood. This promotional photo for Hotel Wailea was taken by Tony Novak-Clifford. 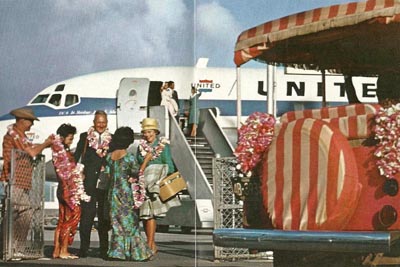 The Gala is strongly enough identified with Hawaii that it has been used in tourism advertising. This photo showing a pink Gala decked out with leis, is from a United Airlines brochure promoting flights to Hawaii. 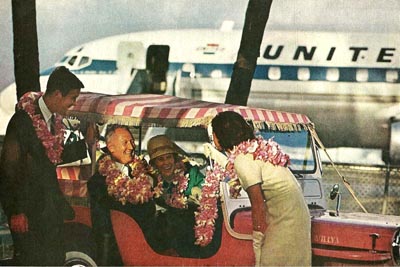 United also used a front view of the Gala from the same photo shoot, in a magazine ad. 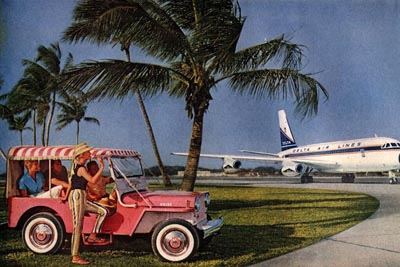 Another photo, probably a Delta Air Lines advertising image, has a younger crowd in the Gala. 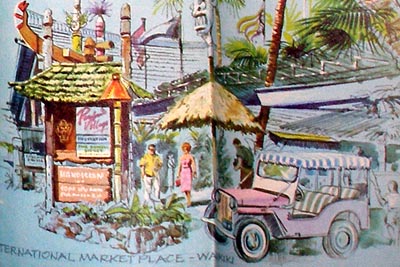 This illustration of a Jeep at Waikiki is part of a large foldout brochure (360K JPEG) showing many Hawaiian scenes, published by Quantas Airways in Australia. Possibly a bit of artistic license here, putting a blue-striped top on a pink Jeep.

See also Jeeps in Ride The Wild Surf (and in Blue Hawaii.)