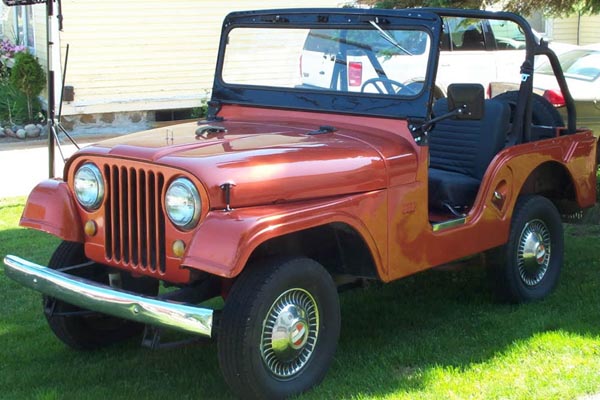 In 1965 Kaiser Jeep replaced the DJ-3A Dispatcher with the DJ-5 "Dispatcher 100", a two-wheel drive version of the CJ-5. This photo of a 1966 example is courtesy of Joe Chapman. Like the CJ-5 of that era, the DJ was available with the F-head four cylinder or the Dauntless V-6; see a DJ-5 spec sheet (20K GIF).

There was also a long-wheelbase DJ-6; Jim Allen says in Illustrated Buyer's Guide: Jeep that "It was built in almost equal numbers to the DJ-5. The big question is, where are they now?"

The U.S. Post Office bought some DJ-5's, with hardtops and modifications including door sills modified for easy access, spare tires missing from the right side to provide clearance for sliding doors and mailboxes, and in some cases right-hand drive. See a photo by Lem Watson of the interior (200K JPEG) including dash-mounted automatic transmission, on his postal DJ-5 (220K JPEG). 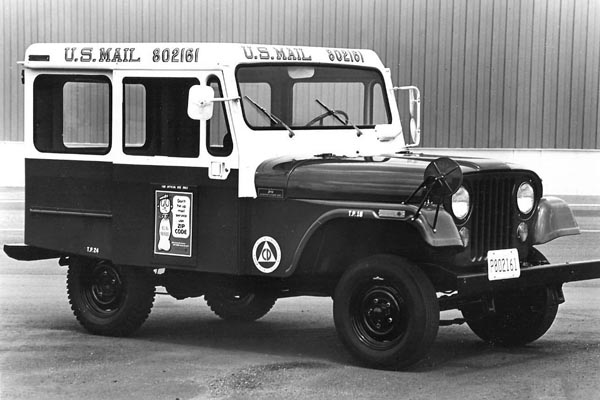 With the Post Office becoming the main buyer for delivery Jeeps, Kaiser created the DJ-5A in 1968, with a fully enclosed body, and Chevrolet 4-cylinder engine and PowerGlide automatic transmission for stop-and-go driving. This photo shows a "Dispatcher 100" nameplate on the cowl, rather than a JEEP stamping in the sheet metal.


Mark Randall describes other distinguishing details of the DJ-5A: no rear wheel opening cutouts, painted headlight rings, unique large amber turn signals in the grille with no chrome rings, wiper motor on the outside, paddle latches on the sliding doors, and square taillights mounted high on the rear.

After purchasing Kaiser in 1970, American Motors used its own inline six-cylinder engine during the 1970's, and American General built versions (up to DJ-5M) into the 1980's, using other engines. The extended radiator guard necessary to accommodate the larger engines gave it a "bullnose" look. 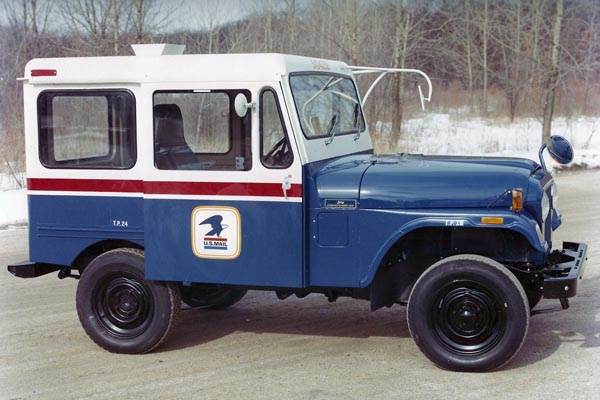 Mark lists other changes AM General made to the postal Jeep: they initially had no rear wheel openings, but at some time in late '70 the rear wheel cutout was added to make it easier to remove the wheels, and the high-mounted square taillights became round cutout lights with separate amber rear signal lights.

This undated photo also shows further changes: projecting handles on the doors, fender-mounted front turn signals, wiper motor moved inside, and ventilators on the cowl and roof. See below for the various drive trains used through 1984. 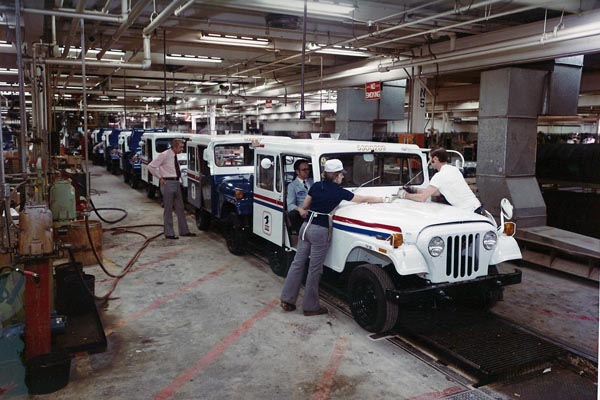 This AM General advertising photo shows the assembly line of the former South Bend Studebaker plant, bought by AM General in 1967. The blue and white paint scheme began changing to all white circa 1976, and this picture suggests that the first white Jeeps may have been DJ-5E Electrucks (see below).

Mark Randall points out the distinctive features of the DJ-5E on this example; a longer front fender and the radiator guard immediately behind the bumper. (Note also that the mirrors on the blue Jeeps indicate left-hand drive.) Photo courtesy of Hugo90 on Flickr. 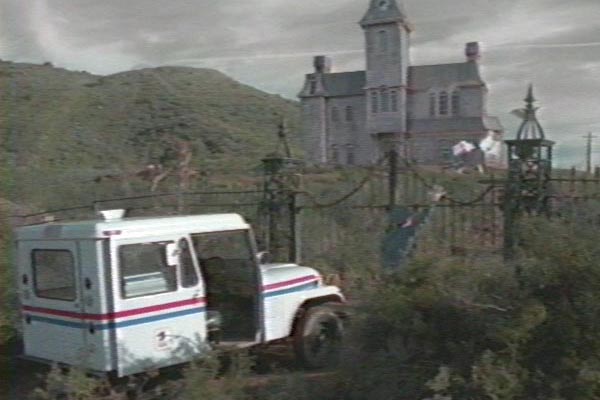 This postal Jeep delivered some letters to the Addams family mansion in the movie Addams Family Reunion (1997). See also a front view (40K JPEG) from the film. 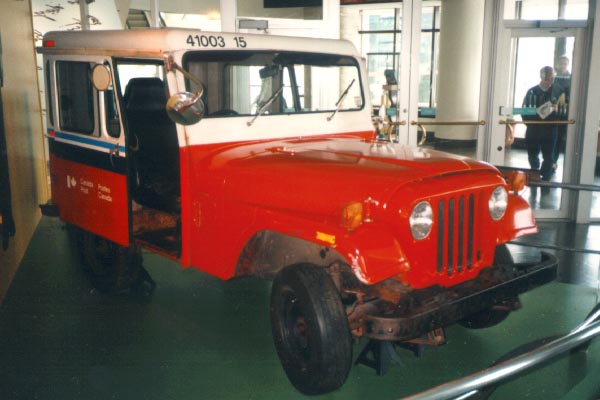 Postal Jeeps were also used in Canada, but many of them were replaced with newer trucks as early as the 1970's. The example in this photo was in service on the east coast of Canada into the 1980's, and is now preserved at the Canadian Postal Museum in Ottawa. See also a rear view photo and the utilitarian interior (40K JPEGs). 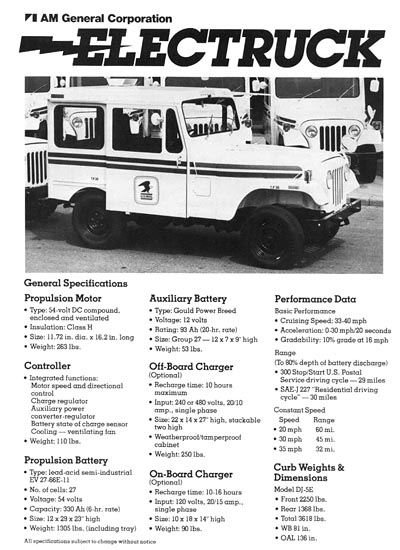 AM General may have been ahead of their time with an electric postal Jeep in 1976. They designated it DJ-5E and marketed it as the Electruck. The longer front end is noticeable in this photo; the front fender panel extending four inches back beyond the wheel opening, and the front grille pushed forward to the bumper.

This E-Jeep used a 20-horsepower compound-wind DC Motor made by Gould, and was capable of hitting 40 miles per hour and travelling 45 miles at 30 MPH. The specs also mention acceleration from 0-30 MPH in 20 seconds, and ability to take a 10% grade at 16 MPH! 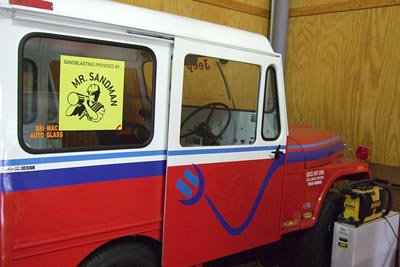 Over 350 electric Jeeps were reportedly sold to the U.S. Postal Service, and five sent to Canada Post. One of those Canadian examples is known to have survived and been restored, as seen here. 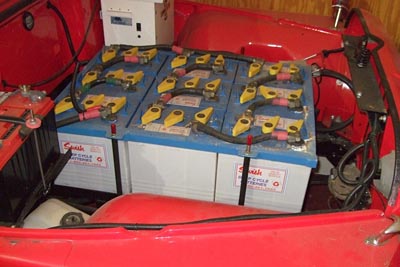 The 54-volt power for the Electruck was initially provided by two large 27-volt lead-acid batteries from Gould, weighing 1305 pounds. Those were later replaced by the USPS with Eagle-Picher batteries. The same voltage is provided here by nine 6-volt units in series. 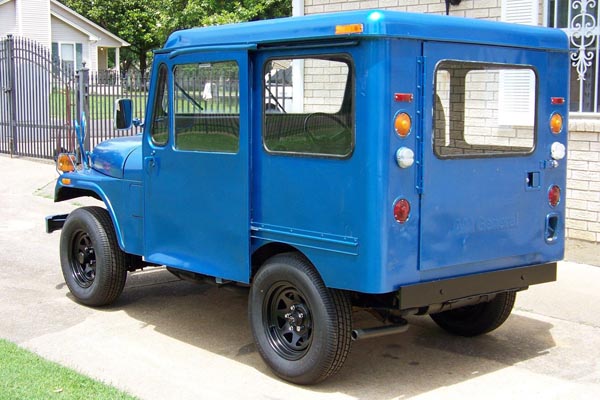 The postal Jeeps have also been retired in the U.S., and much as Willys envisioned in 1955, the two-wheel drive Jeep is now becoming an economical recreational vehicle with a lot of potential.

Models of the DJ-5 Series

Thanks to Mark Randall and all the photographers. -- Derek Redmond

See more postal Jeep photos on CJ3B.info in Delivery Jeep Hardtops and U.S. Mail Via CJ-3B and the Postal Fleetvan.