Built on a Hillside 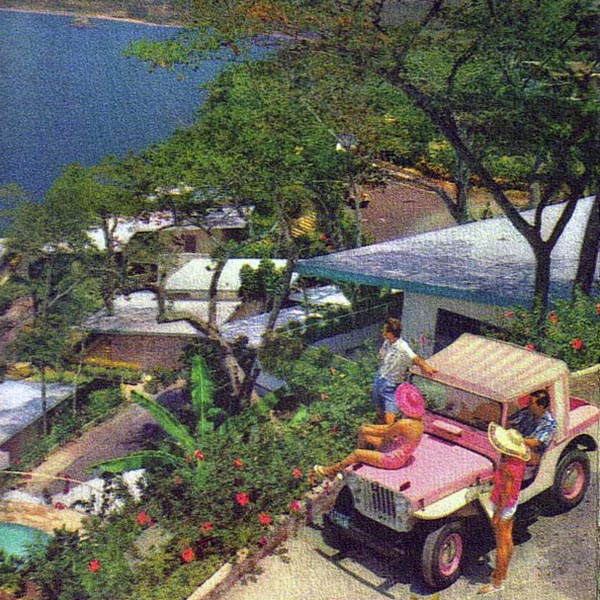 In the mid-1950s, while Jeep engineers were coasting on the leveraging of the M38A1 into the CJ-5, and dreaming of a huge success with the Forward Control trucks, construction was underway in Acapulco, Mexico on the unique Las Brisas ("the breezes") hillside resort which would have an unexpected impact on Kaiser Jeep's fortunes.

One travel writer has said: "Las Brisas... so much has been written about the legend of this hotel, almost caught in a time warp. Elvis Presley filmed movies here, Elizabeth Taylor celebrated her birthday here. Where else would you have your own private pool, your own pink jeep and your own private beach club? This is one of the world's most romantic hotels."

(Note: Although there are Jeeps in Elvis Presley's movie Fun in Acapulco, Presley did not actually travel to Acapulco for the location shooting.) 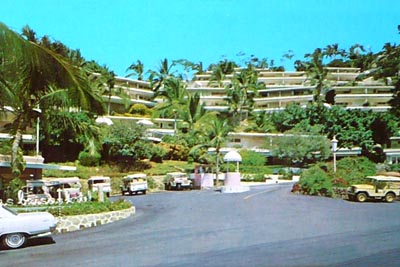 A review of the new resort (300K GIF) written by Herbert Sutton for the N.Y. Herald-Tribune was reprinted in the Winnipeg Free Press on 22 March 1958:

"Compared to the new hanging hotel of Acapulco, the Hanging Gardens of Babylon were just a backyard in Brooklyn. This pink eagle's nest called Las Brisas, which has just opened here, has a desk at the 650-foot level. Its 71 cottages rise in tiers to the 830 level. That makes it, according to Juan March, its transplanted Majorcan major domo, the world's only 13-storey hotel without an elevator. 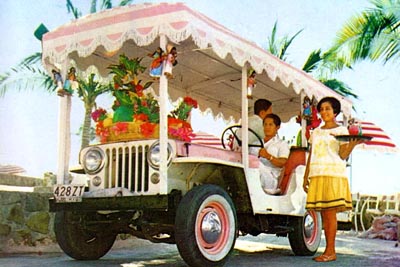 "Instead of a lift, guests journey up and down in a fleet of pink jeeps shaded by pink and white striped awnings. The wagons rent for a flat four dollars a day and never mind the mileage. Non-drivers will be fetched hither and yon in a motorized surrey with pink fringe on top.

"Rates on Señor March's pink cloud run from $20 to $32 a day, per room, during the season. The high rate includes a private pool which March installed for the benefit of people over 45 'who no longer have the figure to appear in a bathing suit in public.'" 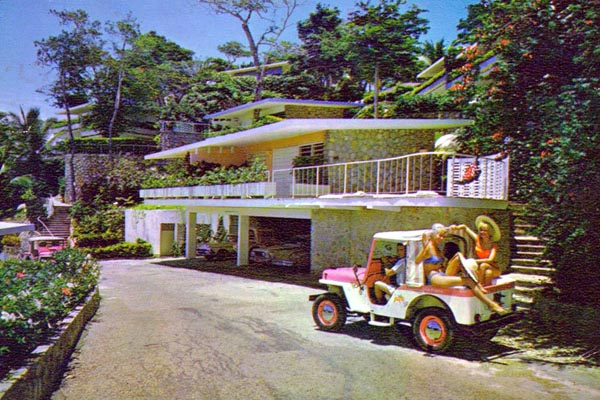 The resort had decided to use DJ-3A Dispatcher Jeeps with canvas halfcab tops as guest transportation, and these Jeeps soon became the inspiration for what Willys began marketing to resorts around the world as the "Jeep Gala".

This postcard photo (200K JPEG) shows three of the hotel's Jeeps (including one in the garage). Looks like the same driver in a striped shirt as in the photo at the top of this page, but the girls (under 45) have changed into bathing suits. According to the back of the postcard, "more than one hundred pink and white jeeps are available for guests." 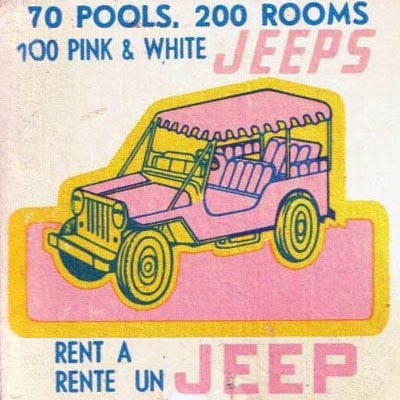 Louis Yocich, a salesman for Willys Export, saw potential for a production Jeep similar to the breezemobiles, and passed his suggestion along to Kaiser-Willys in Toledo. (See more on Surrey Gala Jeep Origins.)

This drawing on an undated matchbook also advertises 100 Jeeps for rent. See more Las Brisas Jeep memorabilia in See Acapulco in a Pink Jeep on CJ3B.info. 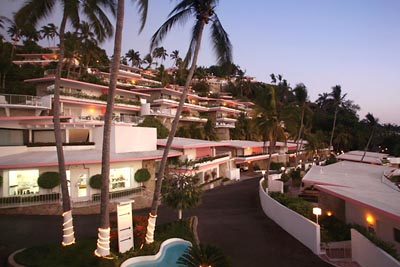 Fifty years later, Las Brisas retains its appeal although it hasn't changed a great deal. An excerpt from the mixed reviews at Tripadvisor.com: "Las Brisas was certainly THE place to go in the 70s. It embodied everything that was cool and swanky about the Rat Pack lifestyle. Unfortunately, it seems that they haven't touched anything since...."

But typical of the good reviews from Expedia.ca is this couple's comment: "We stayed at this hotel on our honeymoon and it was absolutely amazing. Every room has an amazing view of the bay and the staff is so friendly. The jeeps which bring you to and from your room are such a fun touch and are faster than some hotels' elevators. You are going to love it here. It is number one in Acapulco. You have absolute privacy here at this hotel. My wife and I will always remember our honeymoon and our stay at this hotel." 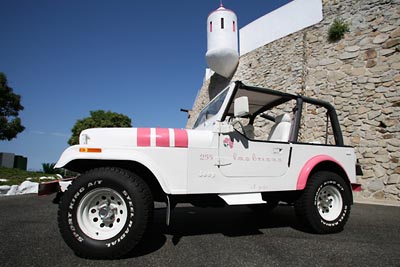 Las Brisas hasn't used Jeeps exclusively; they have tried other vehicles including the Volkswagen "Thing". But as of 2007, guests can ride or rent Wranglers (seen here in a photo from Orbitz.com.) And they have their critics.

From Tripadvisor.com: "The Jeeps that the hotel is so famous for also got very annoying. Most of the time we had to wait at least 5 minutes for one to pick us up, which got very old after the first few times. The drivers sometimes seemed annoyed that we wanted a ride. It wasn't good to always have to rely on the Jeeps to go anywhere. We felt a bit helpless. So I would say the Jeeps detracted from the overall experience a great deal."

"DO NOT GET THE JEEP from Las Brisas -- you are targeted by the police for bribes! We along with 3 other couples were pulled over by the police and were asked to hand over $30-40 in a dark alley!" 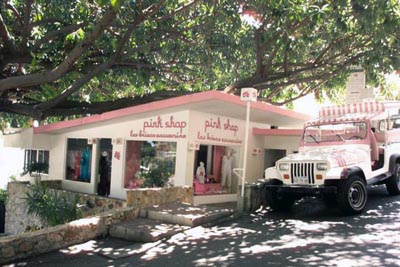 From "Life's a Breeze at Las Brisas": "I returned to my casita to use its pièce de résistance -- my own private pool. Swishing through the floating pink hibiscus and white alameda flowers, I swam to the sound of palms rustling, green against the azure sky. I could spend a year on this balcony.

"Las Brisas has 24-hour room service. Trays, covered with pink napkins, arrive by jeep. The waiters are especially trained to hold the tray out the window with one hand and drive with the other.

"If one actually wanted to leave this hillside Shangri-la, a call to the desk brings one of those pink and white jeeps to deliver you to your resort destination." 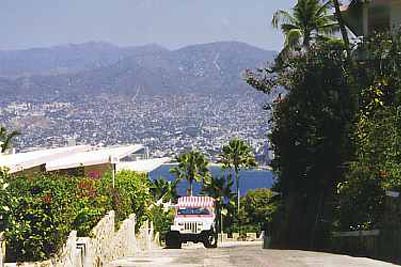 This photo shows the view from Las Brisas across the bay of Acapulco.

Fodor's review of Las Brisas: "Perhaps Acapulco's signature resort, this hilltop haven is particularly popular with honeymooners. (The company motto is actually 'Where children are seldom seen, but often created.') There are a variety of quarters, from one-bedroom units to deluxe private casitas complete with small private pools. Room interiors are a little dated, but nobody seems to mind because of the enchanting bay views. Since the property is very spread out, transportation is by pink-and-white golf-cart shuttles, though the wait for one can be up to 20 minutes. The hotel also provides transportation to its private beach club. A Continental breakfast is delivered to your room each morning."

Thanks to Bruce Agan for the postcards, matchbook and brochure. -- Derek Redmond