Here's my look at what was happening during the Christmas season sixty years ago. I've tried to include Jeep-related news, but in fact 1958 wasn't a very eventful year in the Willys world. Still, I hope you enjoy the nostalgia here. -- Derek Redmond 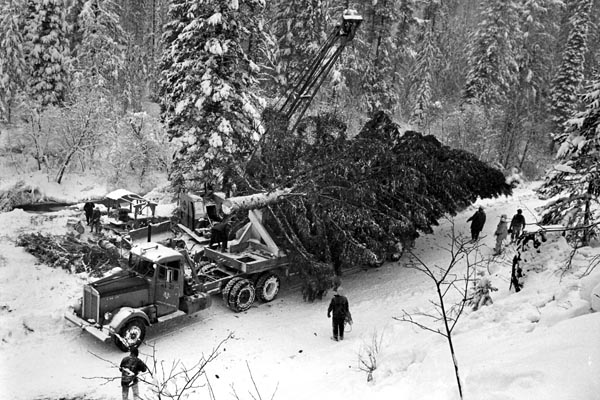 On a snowy Monday, 1 December 1958, in the Kootenai National Forest of Montana, lumberjack Red Stout cut a carefully selected 79-year-old spruce to be sent by truck and rail to the lawn of Dwight Eisenhower's Whte House in Washington, as the National Christmas Tree. (1)

A reporter on the scene wrote that "with a crack heard across the valley, it began to fall, shaking snow off its branches like a wooly dog shedding water." (2) 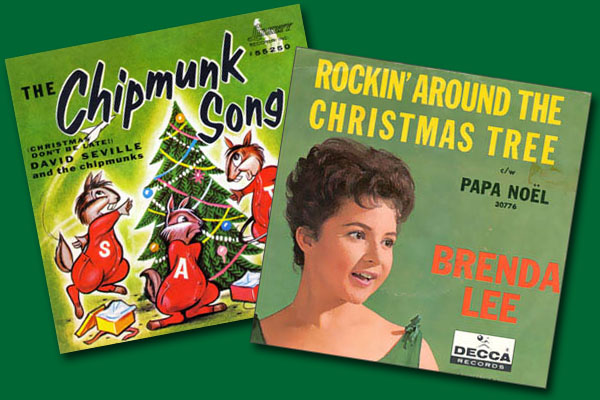 "Rockin' Around the Christmas Tree" had been recorded by 13-year-old Brenda Lee in October, but the record did not sell well for the unknown singer. It would be a couple more years before she became a star and the song became popular, eventually reaching #3 on the charts in 1965.

Number 1 for Christmas 1958 was "The Chipmunk Song (Christmas Don't Be Late)" by David Seville (real name Ross Bagdasarian) -- the only Christmas record to ever hit #1 on the Billboard Hot 100. 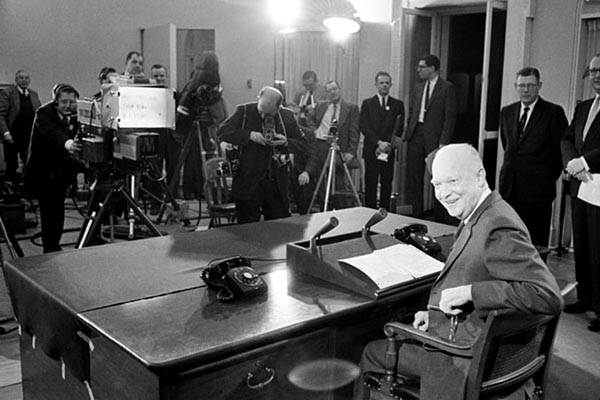 Ike was the first U.S. President to do press conferences on television, and on 19 December a recording of his voice expressing a "wish for peace on earth and good will to men" was broadcast as the first transmission of a human voice from space, via the SCORE ("Signal Communication by Orbiting Relay") satellite. (3) 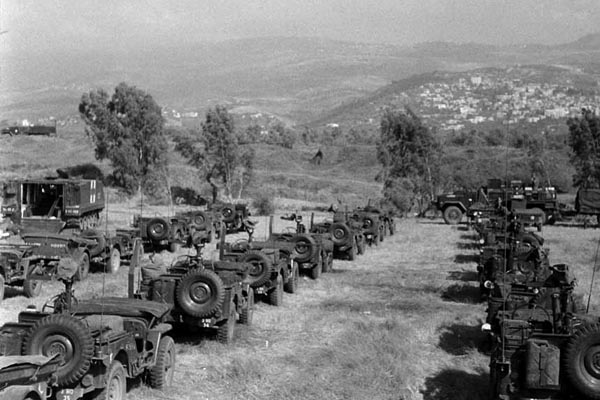 There were many prayers for world peace that Christmas, following the return of U.S. troops at the end of October, from the first American military deployment to the Middle East.

Eisenhower had authorized "Operation Blue Bat" in July, in response to the threat of a civil war in Lebanon between the pro-Western government and Arab nationalists. 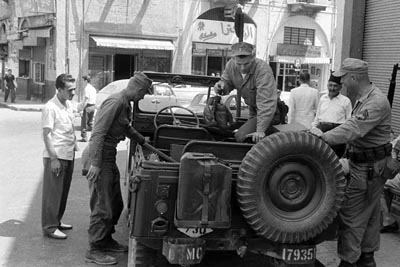 Blue Bat had included 8,500 soldiers of the 1st Airborne from Germany, and 5,600 of the 8th Marines from North Carolina. The U.S. forces were not involved in the heavy fighting, but some 6,000 Lebanese military and rebels were killed before a compromise was reached. (4)

Seen above are U.S. Army M38s and an M59 APC ambulance outside Beirut. At right are Marines in Beirut with their M38A1; looks like they found some boxing gloves to help pass the time. Photos taken for LIFE magazine.(5) 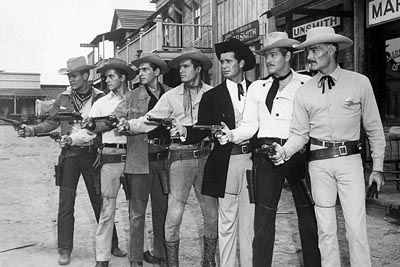 Guns were also all over the 1958-59 television lineup. Seven of the ten top-rated TV shows were westerns, including Gunsmoke on the CBS network at #1, and NBC's Wagon Train at #2. There were also seven more shoot-'em-ups in the top 30. (6) 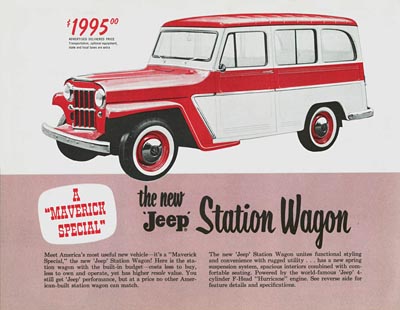 In fact there wasn't much that was new about the "new" Maverick wagon; this ad mentioned that it had "comfortable seating." Jeep sales had been slumping in 1958, so Willys Motors didn't have a lot of money to spend on developing new models. 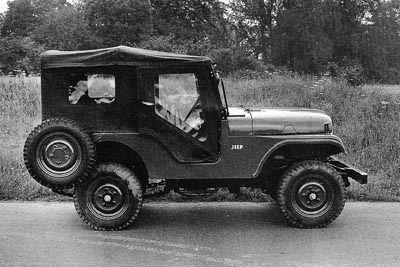 One bright spot was the international market; over 1,000 of the 6,000 CJ-3Bs produced in Toledo during the 1958 model year had been exported straight to Willys Australia, and licensed plants around the world were cranking out Jeeps.

However, a new attempt to break into the British market was unsuccessful, as merger talks between Edgar Kaiser and the chairman of the Rover Company in the UK (initially reported in the New York Times on 21 June 1958, 100K JPEG)) broke down by Christmas. A prototype of a CJ-5 on a heavy Land Rover chassis had even been built (right). It was an awkward fit, apparently like the proposed merger itself, and when Willys' sales improved in 1959, the idea was forgotten. (7)

In fact, sales by all U.S. car makers had dropped during the economic recession of 1958. There were no brand-new models on the street in this Christmas Eve photo of downtown Marion, Indiana. But last-minute shoppers were out in force, as the economic picture was brightening by December. (8) 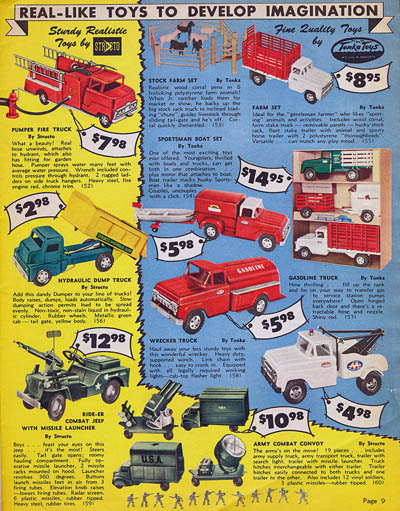 This typical 1958 Christmas toy catalogue page features Structo and Tonka pressed-steel trucks. Tonka modestly calls its pickup truck and boat trailer "one of the most exciting toys ever offered."

But the Structo fire engine sounds more exciting, with a hose that sprays real water. Not to be outdone, Tonka says about its gasoline tanker: "How thrilling... fill up the tank and be on your way to transfer gas...!"

Surprisingly, it would be another 4 years before Tonka Toys came up with the idea of building their iconic toy Jeep. But among the military vehicles here, is a Structo "Ride-Er Combat Jeep" -- a pedal car with "fully operative missile launcher." 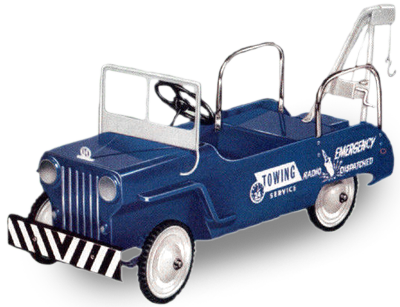 Hamilton Pedal-Drive Jeeps had also been around for a few years, and their new model for 1958 was the No. 808 Tow Truck Jeep, capable of lifting another pedal car with its functional hoist. 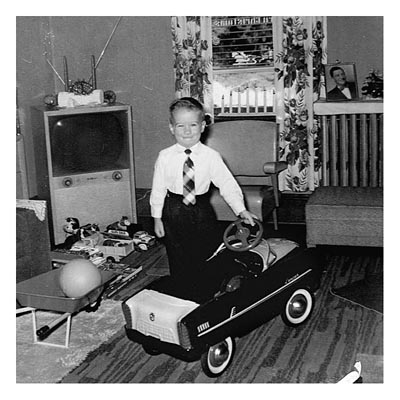 This proud little city slicker looks happy with his pedal car on Christmas morning, even though it isn't a Jeep. (He's probably too young to watch Maverick.)

He also has some of those pressed-steel trucks, but seems to mainly be interested in getting his Murray Lancer out onto the sidewalk. 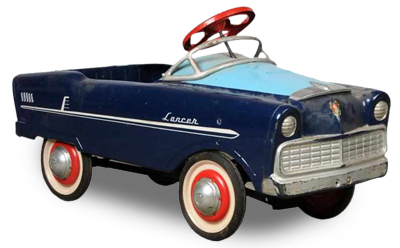 I'm not sure where the Murray Ohio Mfg. company got the "Lancer" name. Some later versions of it came with a Chevrolet badge on the front, and it does look a bit like a '56 Chevy (see the photo below.) 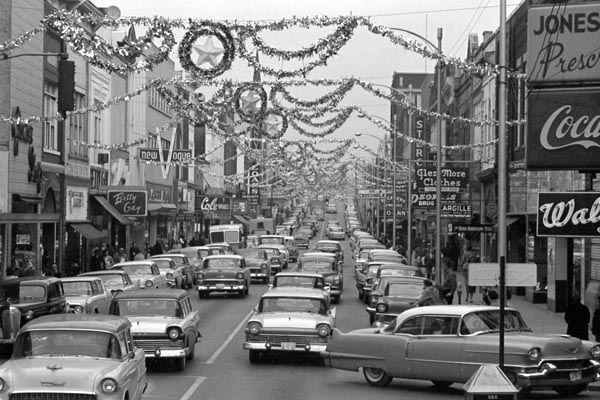 In Johnson City, Tennessee it was pedal car weather -- a white Christmas was not expected there. (9)

And again mostly older cars on the street. Both GM and Ford had followed Chrysler's lead from last year, and gone with four headlights for '58, but I think the only fourplays I see here are Dodges or Chryslers. The Fords in the foreground are '57s, and the Chevys and the Caddy are '56s. 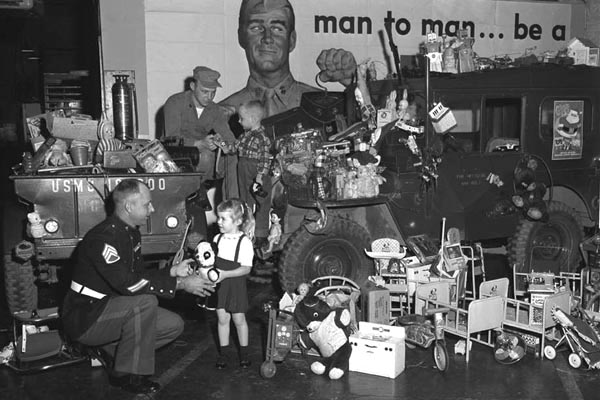 At the Johnson City armory, the Marines were running "Toys for Tots." If the weather turned bad, they were clearly ready for it; they had an M38 complete with an Arctic top, cowl-mounted gas heater kit and trailer, to carry the toys collected for children in need. (9) 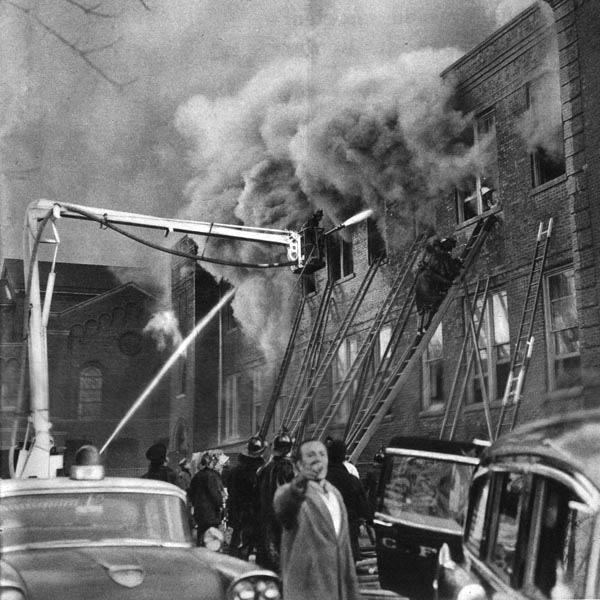 In Chicago, 92 children would not see Christmas. On the afternoon of Monday, 1 December, the children and three teachers perished in a fire at Our Lady of the Angels school. (10)

Although it was only a two-story building, it was a firetrap inside, the alarm was not called in promptly, and firefighters had to break through an iron fence. Custodians had attempted to rescue students with ladders that were too short to reach the second floor.

Also seen in this photo is one of the first uses of a new tool, invented by Chicago Fire Commissioner Robert Quinn after seeing a tree-trimming truck at work -- the "snorkel."

But it was too late to save the 92 children. Another 77 suffered serious injuries. 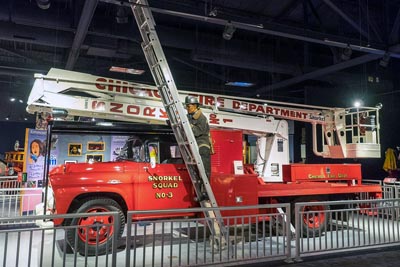 In the 1960s the snorkel became a standard piece of fire apparatus for most cities around the world. After the retirement of Chicago's Snorkel Number 1, the 1958 GMC truck was restored for display in the North Charleston and American LaFrance Fire Museum in South Carolina. (11) Thanks to Ben Walther and TripAdvisor for this great photo.

Our Lady of the Angels school was rebuilt, and some forty years later a memorial to the victims of the fire was installed in the building. 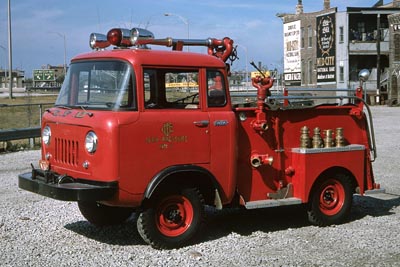 The snorkel was not Commissioner Quinn's only technological innovation for the CFD. He had already placed two-way radios in all trucks, and soon initiated the development of mobile deluge guns which could direct large master streams hundreds of feet in the air. The CFD used Jeep Forward Control trucks for this and other special purposes (see Chicago FD's Jeep FC Units on CJ3B.info.) (12) 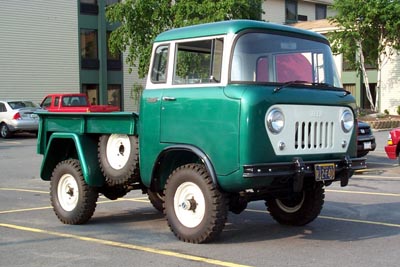 Back in Toledo, one improvement that Willys had implemented in the Jeep line in 1958 was a wider stance for the little FC-150 truck. It had been somewhat unstable riding on the 48-inch-wide track of the CJ-5 for the last two years, and this was increased to 57 inches.

Thanks to the The FC Connection and Randall Bond for this photo of his '58 FC-150. 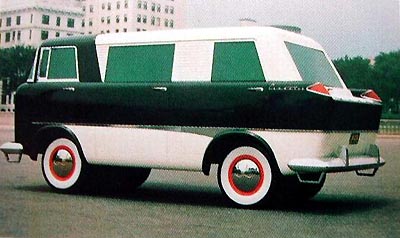 Willys was also playing with ideas dreamed up by Brooks Stevens for the longer wheelbase FC-170. In 1958 they had three "Commuter" van prototpes built at Reutter coachworks in Stuttgart, Germany, who specialized in custom bodies, particularly for Porsche. The fate of these vans is unknonwn, although it has long been rumored that Henry Kaiser kept one. 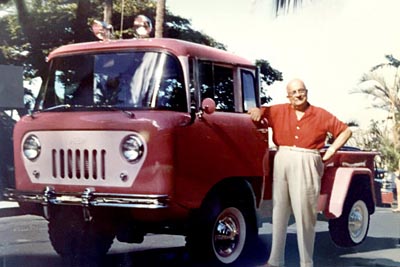 Henry J. Kaiser, patriarch of Kaiser Industries, was 76 years old in 1958, and had been living in Hawaii with his second wife Alyce ("Ale") since 1954. Ale had let it be known that she would like Henry to give her a truck this year for Christmas, and Henry reportedly said, "Now what on earth would you do with a truck?"

Ale replied, "It would be great if I had a truck to haul landscaping plants and gardening supplies.... Think of all the uses."

Henry thought he was being kidded, but went ahead and ordered an FC-170 from Toledo, painted in her favorite color, pink. (13) 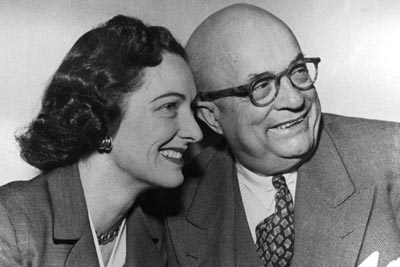 The pink truck generated interest among the locals when it was unloaded from the S.S. Leilani. On Christmas Day, Mrs. Kaiser took the Jeep out for a drive, and pronounced "It's a living doll. It's the most useful Christmas present you could have -- simply terrific."

Only after seeing her so happy, was Henry finally sure that it wasn't a joke.

See more on Henry and Alyce in What Henry Kaiser Gave Up to Make Jeeps on CJ3B.info.


Henry was supposedly retired in Hawaii, but was also developing a resort and a cement factory there. And he took an active interest in the many fields that Kaiser Industries was involved in, one of which was the production of aluminum. In 1958 he hired designers to put together some concepts for all-aluminum automobiles, as a way of generating interest and possible markets for his aluminum.

The drawings were reportedly done by Frank Hershey and Rhys Miller, two of the designers who had worked on the 1955 Ford Thunderbird. (14) They came up with a number of futuristic designs with Hawaiian names, including this one called the Paneole. For some reason I think maybe they dreamed up this color scheme during the Christmas season. 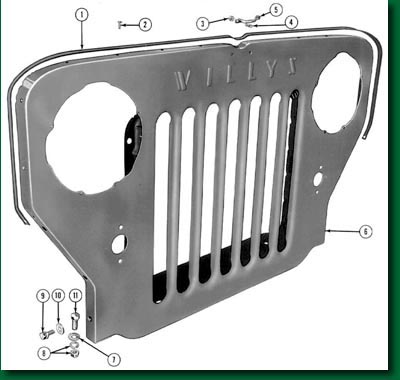 Meanwhile, Willys had a staff of artists producing material for advertising, manuals and parts lists, such as this drawing of the CJ-3B radiator guard.

Question: do you know what little change was made to the CJ-3B in 1958, which has been confusing restorers ever since?

Answer: this Willys Parts List drawing was revised on 29 December 1958, to show the new location of the holes for the parking light mounting bolts! In the large version of this image you can still see a faint outline where the holes used to be, to the left and right of the parking light openings. 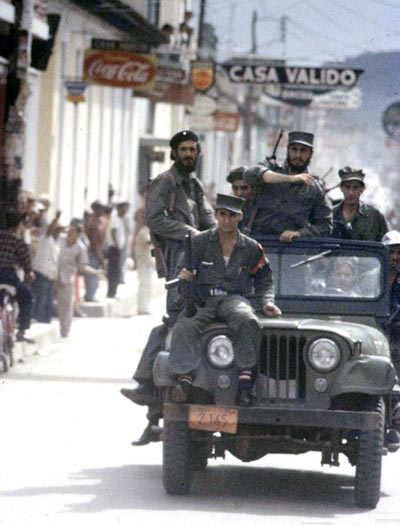 On 29 December, the same day that the Willys artist was painting over the old holes on the drawing, Che Guevara invaded the city of Santa Clara, Cuba -- the final battle of the Cuban revolution. U.S.-backed dictator Fulgencio Batista resigned on New Year's Eve, and Fidel Castro entered Havana shortly afterward (right). This would give the American government something to think about other than the Middle East for the next few years. (See also Jeeps in Cuba on CJ3B.info.)

Castro is riding in an export model CJ-5. This Jeep has the early-style parking lights, with the thicker bezel holding the glass in place. What makes identification difficult is the fact that the screws holding the bezel on the light were always on the top and bottom. 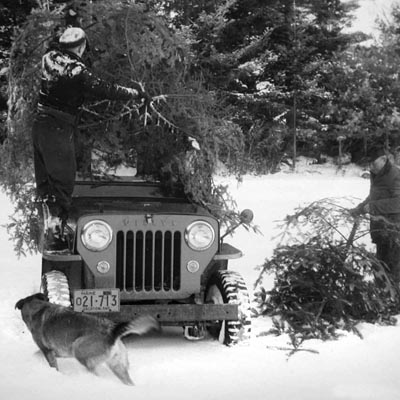 I'll wrap up this look at December 1958 the same place it started -- in the woods cutting Christmas trees.

Years ago, Jerry O'Neil found this picture and a couple of other nice photos of a family in Maine bringing in trees with their Jeep in 1958. (This CJ-3B also has the early parking lights.)

I posted the photos along with more stories about Christmas 1958, including Elvis Presley singing carols in his Army barracks in Germany, in Christmas in the Maine Woods, 1958.


Thanks to all the sources who provided photos and information, listed in the footnotes below. -- Derek Redmond

Return to Christmas Over the Years for more CJ-3B Christmas features.

See also what Nelson Rockefeller was up to in 1958, in Look! Up in the Sky!