Willys Ambulances were built on various different chassis and engine combinations, and received their own serial number ranges starting in 1955.

The four-wheel-drive Willys Ambulance, built on a 6-226 stripped chassis, came with four stretchers, roof ventilator and folding rear step. The six-cylinder Super Hurricane engine was standard, and the four-cylinder Hurricane was optional.

See a rear view in the Jeep Specialized Vehicles and Equipment catalogue. The ambulance is also seen in use in the publication Jeeps in Public Service. 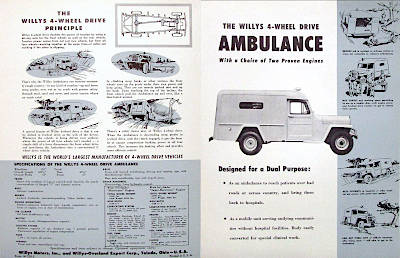 The Willys brochure is filled with little sketches illustrating the features of the ambulance. The front cover mentions the dual functions of backcountry ambulance and mobile clinic. The back cover describes Willys 4-wheel drive, and lists specs for both engine versions. 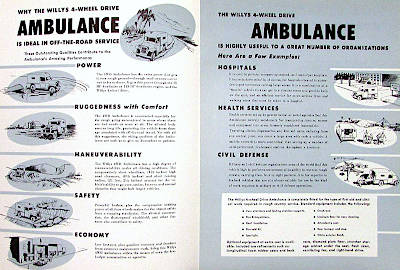 The interior of the brochure lists the "outstanding qualities" of the ambulance, some of the organizations which can make use of it, and the standard equipment included. 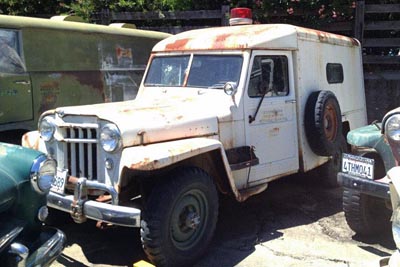 This slightly different US Government surplus field ambulance is in the collection of Willys America in California. See also their Willys Light Duty Rescue Truck. 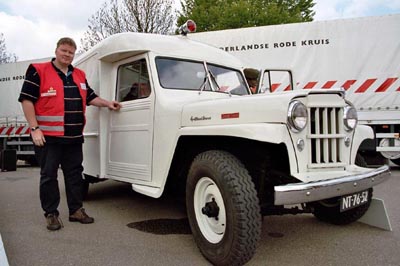 Harry van Oest, who is with the Dutch Rode Kruis (Red Cross), sent this photo of a fully restored ambulance in their Historical Collection. He says, "Our vehicle was donated to H.M. Queen Juliana for the big flood in 1953; it was built in 1952." (See more on the flood in Fifty Years Ago Today on CJ3B.info.)

Another photo (80K JPEG) shows the original lettering "Emergency Ambulance for the people of the Netherlands."

Willys also donated an ambulance to support agricultural reform in Cuba, at a 1959 training course in Havana (90K JPEG). 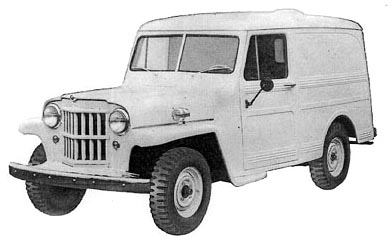 The factory "Utility Ambulance" used the standard Sedan Delivery body with roof vent added, and brackets installed to support two standard army stretchers. It was built in both 4x4 and 2WD versions. 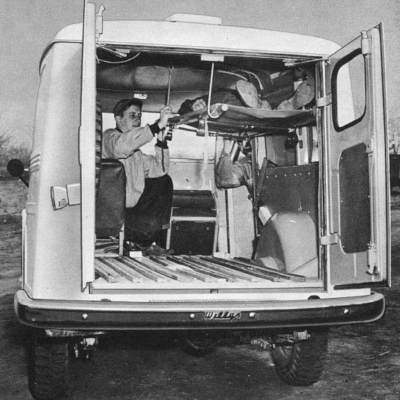 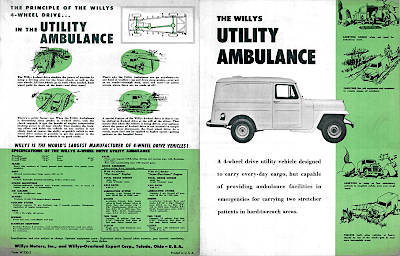 The Willys brochure includes material similar to the large 6-226 Ambulance, but with sketches of the Utility Ambulance specifically. It's promoted as a dual-purpose vehicle for carrying either cargo or patients. 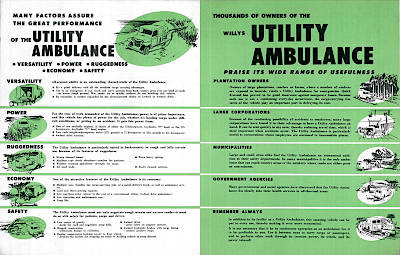 The interior of the brochure claims "thousands of owners," but Willys-Overland Production Figures, 1945-1961 lists only the following total numbers of ambulances on various chassis produced each year after they received their own serial number prefixes: 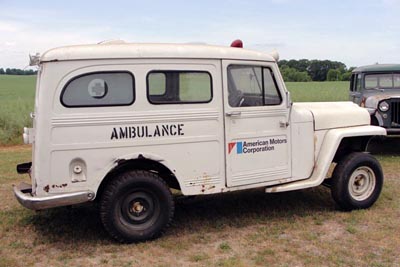 This unit was reportedly kept for use at the Willys plant in Toledo, until at least 1970 when American Motors purchased Kaiser Jeep.

With its side windows, this appears to be the "Deluxe" version (100K JPEG) shown in the Jeep Specialized Vehicles and Equipment catalogue, and based on what looks like a Parkway Conversion body (130K JPEG). 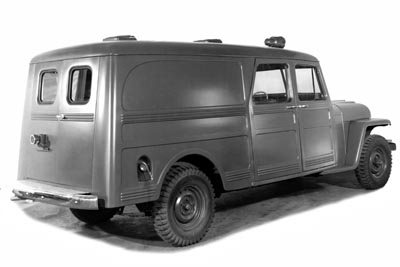 To develop an ambulance with more length in the rear, a panel delivery built on a longer wheelbase was sent out to Shop of Siebert, "quality coach craftsmen since 1853." The prototype was still under Willys Engineering Project 6660 when it was photographed on 1 March 1951. See also a front view (230K JPEG).

Siebert was located at 614 Southard Avenue in Toledo, and someone was apparently a bit sloppy when they put gas in the new ambulance to drive it back to the Willys plant. 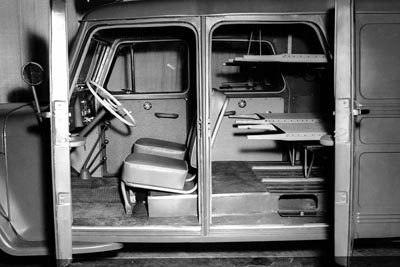 This photo reveals that the 1951 four-door prototype was capable of carrying four stretchers behind the two front seats. The second set of doors was switched between left and right, allowing them to swing to the rear.

Siebert also built ambulances on Ford and other platforms, and apparently the Willys did not sell well. The only place I've seen a photo of a Siebert Willys in service, is in the background of a 1963 Saigon street scene (210K JPEG) from the George Krizansky Collection of the Virtual Vietnam Archive.

A Siebert brochure for the "Willys S.O.S. Ambulance" calls it "America's most versatile low cost ambulance." See the brochure cover (220K JPEG), and the list of features (280K JPEG) including "limousine riding comfort." Thanks to Bill Norris for finding this. 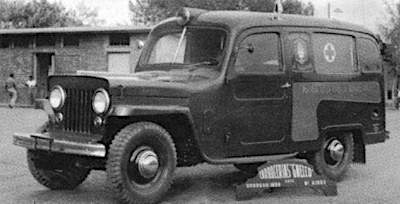 Carrocerías Gnecco (Gnecco Car Bodies) in Buenos Aires built coachwork from 1903 into the 1970s, and among their station wagons, buses and other vehicles was the ambulance in this undated photo. It's not clear exactly what Willys chassis they started with, or why they modified the front bodywork. Photo courtesy of Hugo Semperena at Ruedas Clásicas. 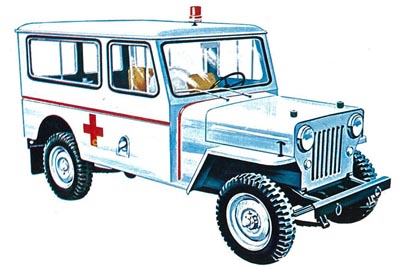 I photographed one of these ambulances in 1990 in northern India -- see Jeeps of Ladakh on CJ3B.info. 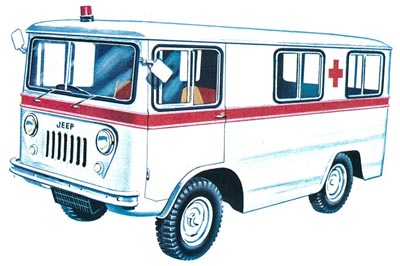 Mahindra also advertised the Jeep Forward Control Ambulance (220K JPEG) based on their FC-160 van. Like the CJ-4 above, the FC was available in left or right-hand-drive, with varying interior arrangements carrying from 1-4 stretchers. Again there is also a specifications page (200 K JPEG).

See more vehicles from this catalogue of Mahindra's 1972 Jeeps. 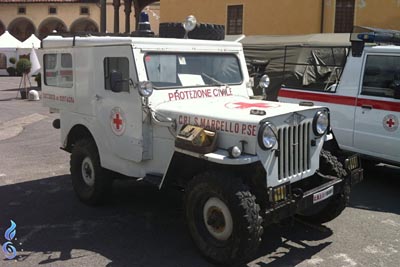 This conversion of a Spanish VIASA Jeep, by Sirecom of La Spezia, Italy, used a short-wheelbase Jeep, but installed an extended hardtop to accommodate a stretcher.

This photo is by Ambu, from Fiamme Blu. See more details on this San Marcello Mountain Rescue Jeep on CJ3B.info. 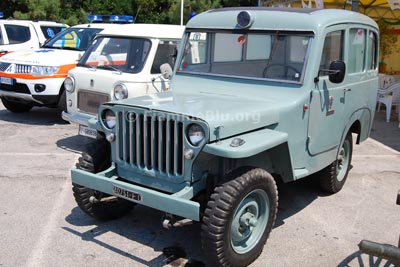 I have no details on where this conversion was done. The photos from Fiamme Blu are by Alberto Di Grazia. 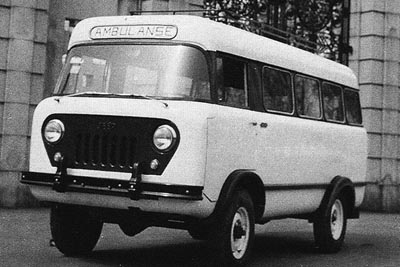 Forward Control Jeeps were popular as fire and rescue vehicles in countries including Australia, Switzerland and the U.S., but for some reason FC ambulance conversions were less common. I did run across this "ambulanse" and another FC-170 van conversion (120K JPEG) in The Jeep in Sweden by Stig Edqvist.


Thanks to all the contributors, including Bill Norris for scanning the Mahindra catalogue. -- Derek Redmond