After 1963 the M606 held sway among the Jeeps in the ANC, and the older CJ-2As, -3As and -3Bs all but disappeared from the military ranks, even if the odd example could still be seen on rare occasions. Moderate numbers of Jeeps of other versions were also in use but were in clear minority. In addition there were a fair number of Ford M151s, described separately in Part 17.

The CJ-5 was never in widespread use in the Congo, except by the UN, and it is unlikely that any were delivered as military aid to the ANC. The odd examples seen now and then were likely salvaged from those left behind by ONUC (see Part 7) or else obtained on the local civilian market. 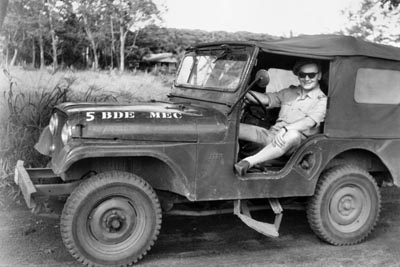 The 5th Mechanized Brigade was a new formation created in 1964 for the re-conquest of northern Congo and included all mercenary units as well as the cream of the Congolese battalions of the ANC. Its HQ was largely staffed by Belgian officers on secondment. This captain is riding a CJ-5 which, judging from its M38A1-style battery hatch in front of the windscreen, was at least a couple of years old. There are suggestions of white paint peeking through in a couple of places so it may be a re-sprayed ONUC vehicle. (Photo via J-P Sonck) 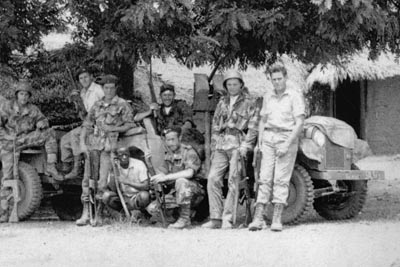 A group of 5 Commando soldiers outside Lisala (see the Congo map) in September 1964, with two of their Jeeps. The front one is a CJ-5 and from its light color seems to be a civilian example. It is armed with a Browning .30-caliber machine gun with a shield, mounted on a pylon that is -- most unusually -- attached to the outside of the body side. The second Jeep is an M606. (Photo via Ivan Smith) 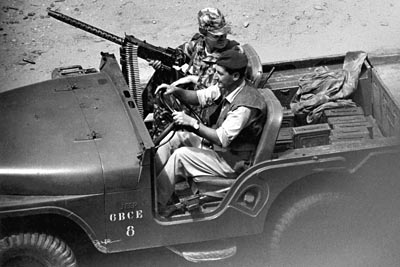 This is a newer CJ-5 judging from the lack of a battery hatch. The Jeep belonged to 6 Commando and was photographed in Stanleyville (Kisangani) around 1965-66. The windshield has been removed and it is armed with a .30-cal. on a front pylon, similar to the installation used on Congolese M606s. Otherwise the vehicle looks in stock condition. 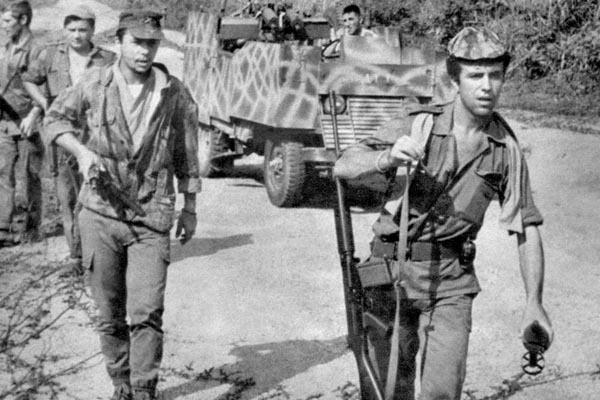 One of the most remarkable Jeeps in the Congo was the armored example named "Ali" that was used by 12 Commando, a.k.a. the Diabos battalion, near Stanleyville in 1965. A couple of glimpses of rounded fenders under the armor reveal that it was based on a CJ-5. Instead of the usual Browning or FN machine guns it is fitted with double 8 mm water-cooled m/36 guns, taken from a Swedish Scania-Vabis armored truck left by the UN.

A still from an 8mm film shows the other side (60K JPEG) of the Jeep as well as its pale yellow camouflage pattern. (Both photos via J-P Sonck)

The CJ-6 was also far less common in ANC service than the M606 during the mid 1960s, but there were moderate numbers of them in use. It is possible that some of these were former Katangese Jeeps (see Part 5) taken over by the ANC in 1963, or ONUC examples (see Part 7) inherited in 1964, but it is likely that most were new deliveries. 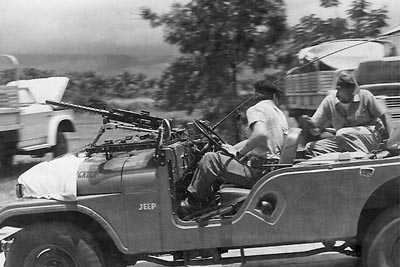 A Jeep of 5 Commando in Lisala in September 1964. The paint scheme of the CJ-6 -- probably medium gray with a black windshield frame -- suggests that it was not originally a military vehicle but perhaps one of the civilian deliveries under US aid that were appropriated by the ANC. The .30-calibre machine gun is resting on top of the hood on its tripod rather than being mounted on a pylon: just like on early M606s of the unit (see Part 10). Note the text on the hood which likely reads "5 Commando Group". (Photo via René García) 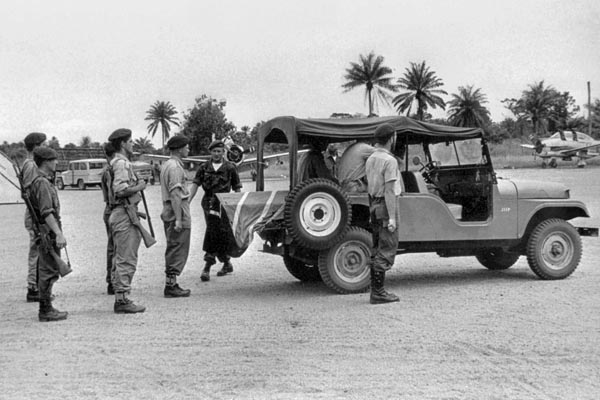 Soldiers of 5 Commando accompany the body of a fallen comrade to his rest in Paulis in late 1964. Like the Jeep above, the colors of this CJ-6 are likely civilian medium gray and black. In the background are a couple of the T-28 light attack aircraft crewed by Cuban pilots in CIA employ (see Part 15). (Photo via René García) 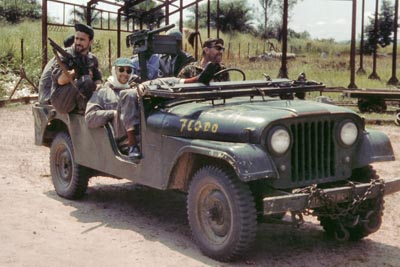 The ANC CJ-6s were not usually used as gun Jeeps but this one has been fitted with a .30-calibre Browning machine gun on a central pylon. It is sloppily marked "7 Codo", i.e. 7 Commando: one of the new Congolese units set up in 1964, with a few white mercenaries in support. There is no military licence plate so it may be a "liberated" Jeep -- but then again, many ANC Jeeps lacked plates. (Photo © Jean-Marie Dupont) 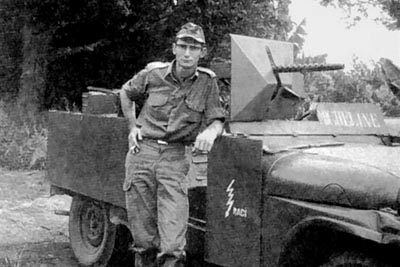 A small number of CJ-6s were armored to some degree. "Micheline" of 14 Commando was one of the most heavily protected examples, as seen in this image. It carried a .30-cal. on a front pylon with a shield, like that seen on some M606s, but there was also plating on the Jeep sides and a .50-cal. machine gun in a unique overhang added at the rear (60K JPEG). The mercenary officer is Christian Tavernier: one of the real "old Congo hands". 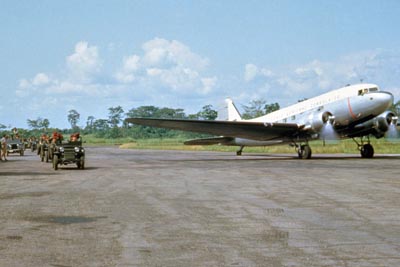 Stanleyville, February 1965. General Mobutu is arriving for a visit in his private VC-47 and the Special Para Group is driving onto the tarmac to greet him. Most of their Jeeps are armored M606s, as shown in a photo in Part 11, but on the left is a rare armored CJ-6 (90K JPEG). It has a large shield across the top and a 75 mm recoilless rifle on a pylon but it is difficult to make out any further details other than its gray color. (Photo © Jens Jensen) 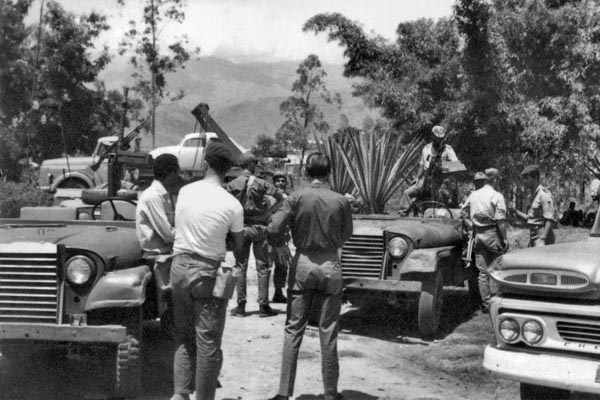 The majority of the mercenary units in the Congo were of course in the employ of the Congolese Government but there were also a few smaller groups raised to protect private enterprises. One of these was working for the SUCRAF sugar company south of Bukavu (see the Congo map). They used a variety of vehicles, including these armed CJ-6s with armored grills. The photo was taken in February 1966, during the last major battle of the Simba rebellion. (Photo © M. Leruitte/www.cegesoma.be ref.139328)

Finally, there were scattered examples of other types of Willys Jeeps found in the Congo in the mid 1960s. There were never that many of them and they are little more than footnotes to the story. 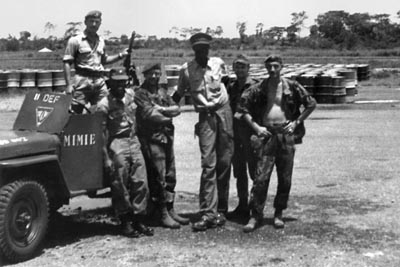 UDEF was an airfield defense unit set up with Belgian assistance to provide security at airfields in the combat zone. This photo is from Paulis which was one of UDEF's bases in 1965. They had a mix of one-off vehicles used for patrols, including this old Jeep presumably scrounged up locally and fitted with some armor and a .30-cal. machine gun. It is either a CJ-2A or a -3A; in either case one of the few in the Congo to have survived in military service this long. (Photo via Belgian Military Archives) 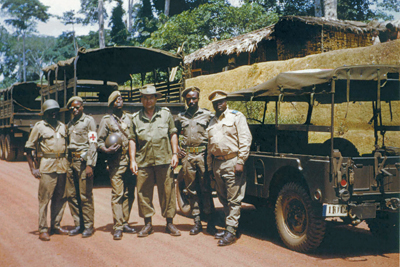 The Jeep at the rear of this ANC column around 1965 may look like a CJ-6 but the taillight, fuel filler cap and spare tire clearly show it to be an M170 ambulance. There were not many M170s in the ANC, and the five-digit registration number indicates a recent delivery rather than one of the few M170s in service at independence (see Part 1).

The M35 trucks ahead in the column were also US aid but most of the trucks given to the ANC were cheaper civilian models which were in most cases just as useful for Congolese purposes. (Photo via J-P Sonck) 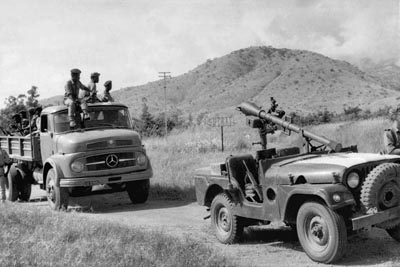 Since the Congo was a receiver of M606s, the USA did not deliver the largely contemporary M38A1 as military aid. ONUC had a few in use in 1960 (see Part 7) but after that the type was rarely if ever seen in the country.

Possibly the only exception was this M38A1 in use with the SUCRAF mercenaries (see above) around 1966. It is fitted with a 75 mm recoilless rifle but the Jeep was probably obtained privately by the group since a rear view (130K JPEG) shows that it carried a Rwandan civilian license plate! (Photos © M. Leruitte/www.cegesoma.be refs. 139277 & 139278)

Continue to Part 14: Congolese Air Force or return to the Table of Contents.