The flat-fender versions of the Jeep never formed a major part of ONUC's vehicle park in the Congo, at least not if you discount the Jeep Trucks and Station Wagons. Only the Indian contingent continued to use flat-fenders in any numbers after the first six months or so.

There was a need for large numbers of additional Jeeps, since ONUC assigned these to national battalions and companies which had brought insufficient transport with them, and also to the mixed units created in the Congo, such as the HQ and support units.

ONUC received only small deliveries of vehicles as US military aid, and fewer still from other countries, and had to purchase most of what it needed directly from manufacturers and dealers. Only a handful of M38A1s reached the Congo, possibly diverted from some other UN project. The UN instead decided to use the CJ-5 as its standard Jeep in the Congo and over the next few years hundreds were procured and shipped in. These were apparently stock civilian vehicles without any military accessories and had the split windscreen common on export models. 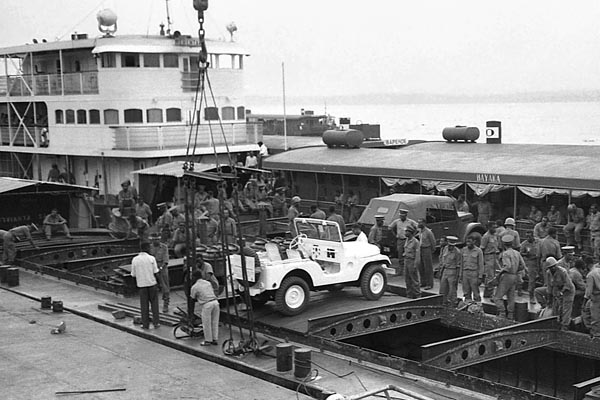 ONUC wasn't entirely dependent on scavenging for vehicles, even in the very early days. This brand-new Jeep shines like a beacon as it is loaded onto a barge at the Leopoldville docks in late July 1960, to go up the Congo River to Banningville (now Bandundu) with the Guinea battalion. The round recess behind the fender reveals this to be an M38A1: a real rarity in the Congo. Interestingly, the Jeep shares the transport with a GAZ-69A, i.e. a Soviet "Jeepski": an even rarer sight in the Congo and very likely brought from home by the Guineans.

A second, closer photo shows the same two vehicles from the rear (200K JPEG). Note the immaculate white finish of the M38A1, inside and out, and the shipping marks on the board strapped to the spare wheel. (Photos © Terence Spencer) 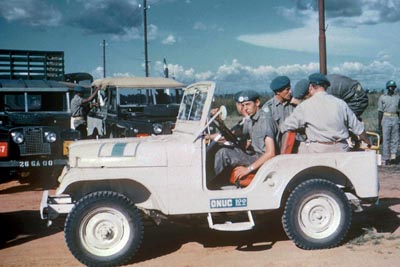 Some national contingents brought their own transport but still got a few UN Jeeps to increase their capacity. The driver of this CJ-5 in 1961 is Lt. John Gleadell, an English officer serving with 4th Ghana Regiment in South Kasai. Two of their own Land Rovers are in the background and as most such country-owned vehicles, were not painted white. The blue and white flash on the hood was normally applied on the left side only, on ONUC CJ-5s and -6s. (Photo via John Gleadell) 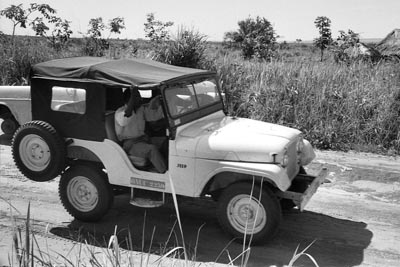 An anonymous looking ONUC CJ-5 in the Kasai province (see the Congo map) in January 1961. Behind it is one of the many civilian cars abandoned on the roads during the unrest and fighting in the province a few months earlier. The windshield frame is black, something that was common on ONUC Jeeps -- perhaps because they were bought as stock civilian vehicles. The top always remained unpainted. There is no blue and white flash on this side, but a second photo (200K JPEG) of the very same Jeep being admired by some villagers shows it present on the other side. (Photos © Terence Spencer) 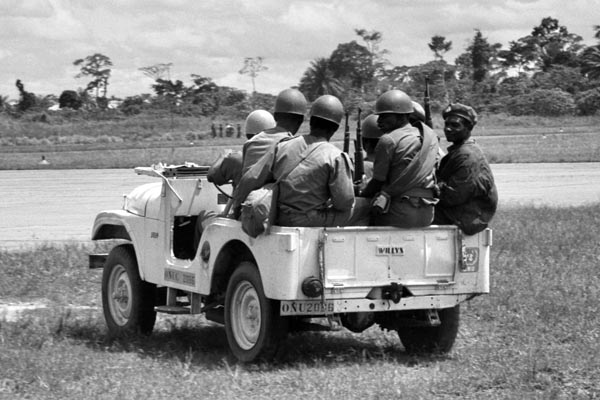 The back end of a typical CJ-5, showing the Spartan fittings on the ONUC Jeeps. This one is used to give some Congolese soldiers a lift at Kindu, in November 1961. For some reason the registration seems to be painted in black on yellow, rather than the normal white on blue. The relations between ONUC and the ANC were often rather poor -- particularly in Kindu where Congolese soldiers and civilians had killed (and partly eaten) a group of Italian UN airmen not long before. (Photo © Terence Spencer) 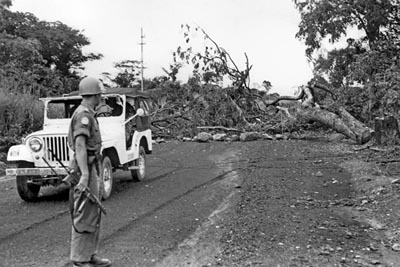 Roadblocks was one of the main ways for the Baluba to hinder the road traffic of its enemies -- whether the Katangese army or ONUC. This one outside Luena only consists of one or two trees but is still effective enough to have forced the Swedish UN soldiers to make a three-point turn with their Jeep and head back the way they came. (Photo © Stig von Bayer) 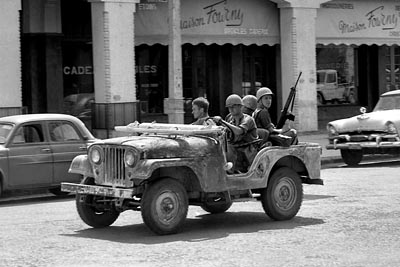 There were times when the normal white colour of the UN vehicles was less than ideal and these soldiers of the Irish 35th Battalion smeared their Jeep with a liberal coat of reddish mud during the campaign against Katangese mercenaries in Elisabethville in September 1961, in Operation "Morthor". By this time the Irish ONUC soldiers had at least traded their WWI vintage Lee-Enfield rifles for FAL automatic rifles. (Photo © Terence Spencer) 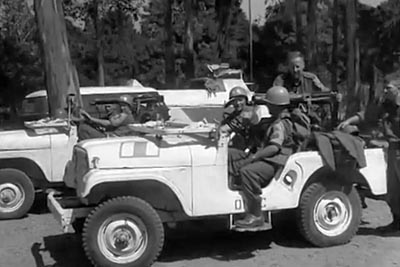 The Irish battalions also armed at least a couple of their CJ-5s by installing water cooled Vickers medium machine guns on pylons behind the front seats. Except for a single Indian CJ-2A (see Part 8), these may have been the only machine gun armed Jeeps in ONUC service. 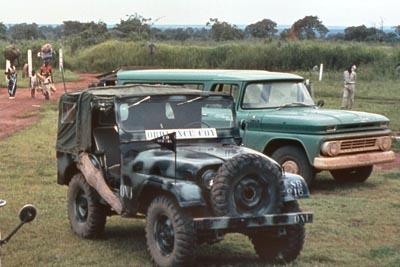 One of the few ONUC Jeeps to be properly camouflage painted was this example in Katanga province in early 1963. The heavy-duty tires, one-piece windshield and armrest on the seat all show that it wasn't one of the standard ONUC CJ-5s but most likely a Katangese one captured during the final round of fighting. It was used by the ONUC armored squadron, which also used captured Katangese M8 armored cars. (Photo © Hans Wahlman)

The UN also provided ONUC with some CJ-6s but these were always in minority and mainly used by units with some special need for the roomier Jeeps. 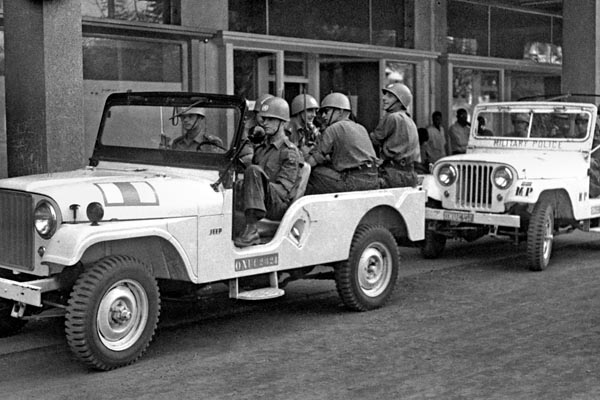 The military police was partial to the CJ-6 since it had space for detainees, when needed. The chaff screen on the grill was a common accessory for Jeeps in the Congo, although less so with ONUC than other users. The large extra indicators on the fenders were often seen on the ONUC CJ-6s, for some reason, but not on their CJ-5s. The second Jeep has a small Swedish flag on the fender; it was common for the units or crews to add little personal touches like this. (Photo © Stig von Bayer)

An additional photo from the same source shows a rear view (160K JPEG) of another MP CJ-6, fitted with radio, near some looted buildings. The two extra lights on the back are clearly visible. 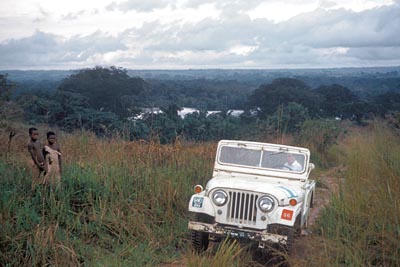 A CJ-6 going up a small road in a typical Congolese landscape, watched by some locals. Like most sane people in the Congo, ONUC drivers tried to keep to the roads (such as they were) wherever possible, but even there the four wheel drive was often a necessity, especially in the rainy season. From this angle it is easy to see that there was a blue and white flash only on the left-hand side of the hood. (Photo © Thorwald Glantz) 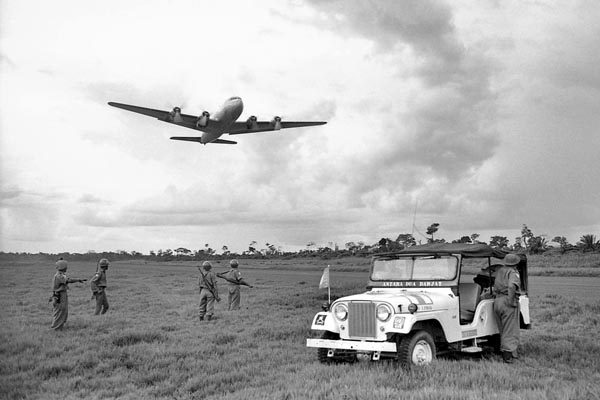 Yet another ONUC CJ-6, this one used by the Malayan Special Force at Kindu (see the Congo map) in late 1961. The crew is watching a UN-charter DC-4 take off: air transport of supplies was a necessity due to the vast size and poor communications of the Congo. This Jeep has been personalized more than usual by the Malays and the windshield frame carries the text Antara Dua Darjat, meaning "Between Two Classes": the name of a popular 1960 Malay film. There are also some Malay words under the UN flash on the hood. (Photo © Terence Spencer)

The ONUC operation ended in mid 1964 and most of the UN-owned vehicles were left behind in the Congo. On paper they were handed over to the Congolese Army (the ANC) but there is little evidence that the Congolese made much use of them (apart from some armored cars refurbished in 1964). 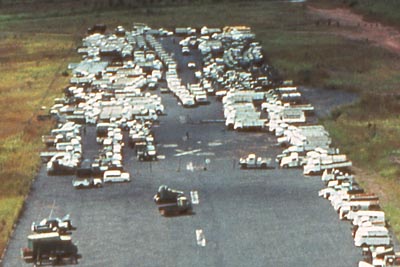 This transport dump was at the old disused airfield at Elisabethville (now Lubumbashi) and included dozens of Jeeps lined up at the far end. A few of these were probably recovered by enterprising locals but most were left to rust away after being stripped of some parts. (Photo © Gunnar Elg)

The next page in the UN story covers the Indian Jeeps in the Congo, both in the 1960s and later.

Continue to Part 8: Indian Contingent or return to the Table of Contents.