Air power played a major role in the Congo in the 1960s, both for transportation in the vast reaches of the country and as a kind of flying artillery during the fighting. Up to 1964, most of the flying operations were carried out by the ONUC air units (see Part 9), but when the UN withdrew, the responsibility was instead picked up by the Force Aerienne Congolaise (FAC).

The FAC was created in 1961, from the remnants of the Belgian colonial aviation unit, but remained a minor operation for the first few years. There were no Congolese pilots so all the flying was done by foreign personnel. From 1964, a large portion of the air operations was carried out by the CIA (see Part 15) but there were also other units. The requirement for all-terrain vehicles was not great in the air force, but it did have some Jeeps. 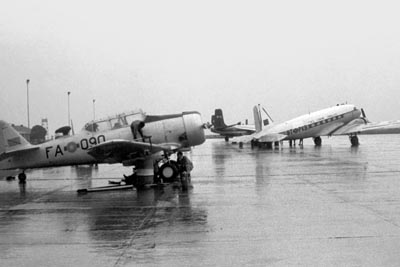 A photo from a rainy Kamina air base (see the Congo map) in August 1964, which sums up the different components of Congolese air power of the period. In the foreground is a T-6 Texan armed trainer aircraft of the mercenary 21 Squadron; the same type was also used by the Italian-run flying school. On the right is a C-47 transport of the Belgian-run FATAC unit, and behind that are two B-26K Counter-Invaders of the CIA air unit. (Photo © Maurice Bourne)

The only flying unit consisting of mercenaries in the employ of the Congolese government was 21 Squadron, set up in August 1964 and disbanded in 1967. It mainly flew armed T-6 Texan trainers but from time to time also had a few transport aircraft. The squadron had a mix of English and French speaking personnel. 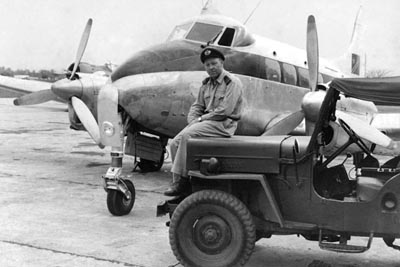 The main base of 21 Squadron was N'Dolo airport in Leopoldville. Seen here is a De Havilland Dove belonging to the unit, with one of the squadron T-6s behind it. Sitting on the hood of the Jeep is Léon Van Den Bon, a Belgian who was the administration officer for much of the squadron's existence. The M606 is an unmodified standard vehicle. (Photo via Léon Van Den Bon) 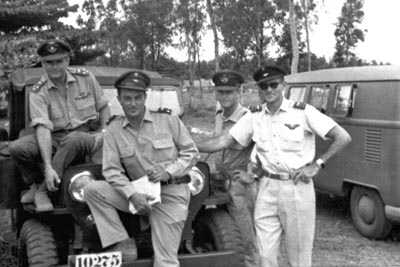 Three South African pilots and one from New Zealand, who made up some of the English speaking personnel of the squadron in 1964. They wear a mix of uniforms and insignia, in keeping with the mercenary nature of the unit. Their M606 had no military markings other than the standard registration number. The VW bus on the right was in fact a more common mode of transport for the air force than the Jeep. (Photo via Ares Klootwyk) 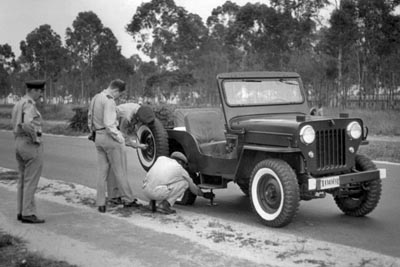 Even a Jeep gets a flat tire on occasion, as these air officers found out outside the N'Dolo airport. The driver is using the standard Willys jack, taken from the tool box under the passenger seat, while one of the officers unscrews the lugs on the spare wheel with the tire iron. The registration "10001" suggests that this was the very first M606 registered in the Congo, since all others spotted have had higher numbers. (Photo © Léon Hadermann) 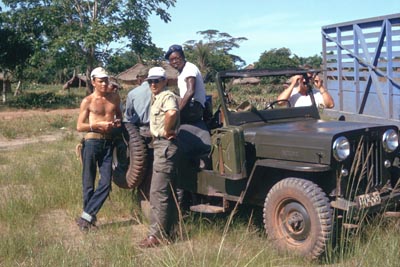 From February 1965, the main forward base of 21 Squadron was Bumba in northwestern Congo (see the Congo map) and this photo was taken there around May that year. Bumba was a small town with a grass airstrip and dirt roads and the Jeep was in this case an appropriate vehicle for the air force staff. This M606, number 10275, is in fact the same one seen two pictures up, but the rusted license plate shows that some time has passed. The two pilots on the left are a Frenchman and a Belgian. (Photo via Bob Houcke) 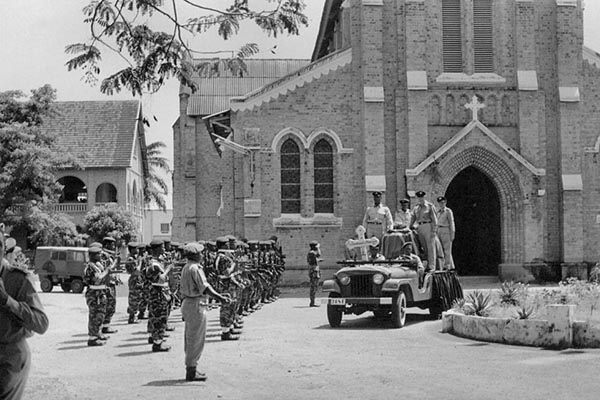 Air operations are always risky -- especially in a place like the Congo -- and there was a steady trickle of casualties. When Belgian Lt. Jean Massart of 21 Squadron was killed in an accident he was buried in Leopoldville with full honors. After the service at St. Anne Cathedral, the coffin was taken to the cemetery by military Jeep. In the background is a Steyr-Puch Haflinger, an Austrian vehicle designed as a Jeep replacement and used in small numbers in the Congo (see Part 18).

Although 21 Squadron and the CIA air unit (see Part 15) were the only combat units in the Congo in the 1964 to 1967 period, they were not the only air units. Belgium contributed an air transport unit while an Italian military mission ran a flying school. All of these were formally part of the FAC and used Congolese military vehicles, including Jeeps. 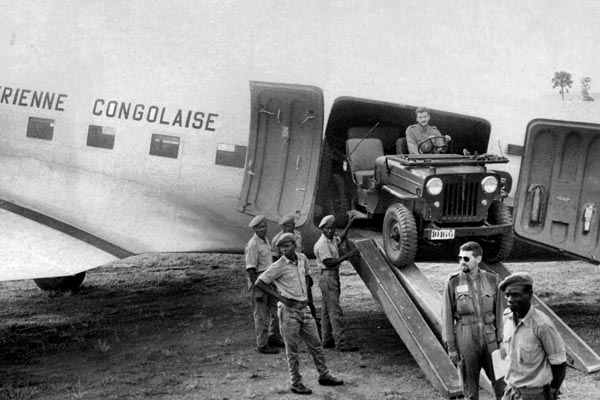 The M606 was of course air portable, just like the original Willys MB, a fact that was very useful in the Congo where the distances were great and the roads poor. Loading and unloading from a C-47 was usually done as in World War II, with some judiciously placed ramps and a fair amount of finely judged steering by the driver -- and as often as not considerable pushing and shoving by helping hands. (Photo © Alain Blume) 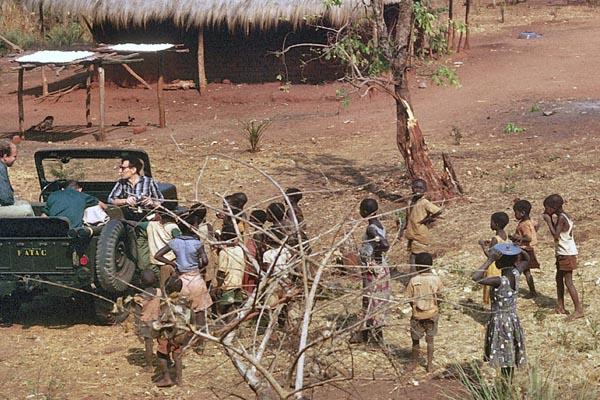 FATAC, or Force Aerienne Tactique au Congo, was a unit set up and staffed by the Belgian Air Force, to provide air transport to the Congolese military. It flew C-47 transports and helicopters and was stationed at the former Belgian air base at Kamina. These members of the unit have obviously gone for a sightseeing trip to a nearby village in their M606. Unusually, it has "FATAC" stencilled on the back and presumably also the front -- probably to discourage the mercenary 5 Commando also stationed at Kamina from "borrowing" the Jeep. (Photo © Jan Hekker) 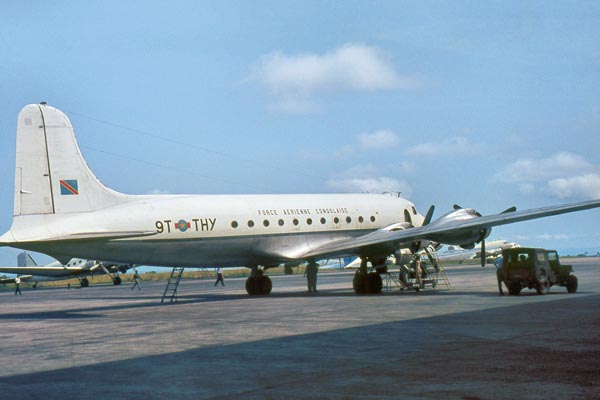 The Douglas C-54 provided the FAC with its first heavy lift capability, and the Congo actually became a haven for the transport type for many years. This is the first aircraft, donated by Portugal, on arrival at N'Djili airport in January 1965. In the background is an Air Congo DC-3 and several former ONUC C-47s left behind the previous year. The M606 has no apparent modifications and may have belonged to the FAC or an army HQ unit. (Photo © André Devillers) 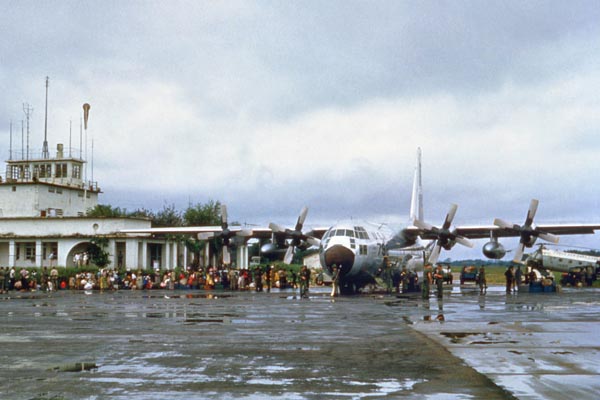 The US Air Force played a significant role in the air transport operations in the Congo, with assistance both to the United Nations and the Congolese government. USAF C-130s also carried the Belgian paratroopers who captured Stanleyville in Operation Dragon Rouge in November 1964. The photo was taken not long after the re-conquest of the city, and Congolese refugees are lining up to be flown out. On the right is a Sikorsky H-21 helicopter of FATAC and also an M606 Jeep. (Photo © Jens Jensen) 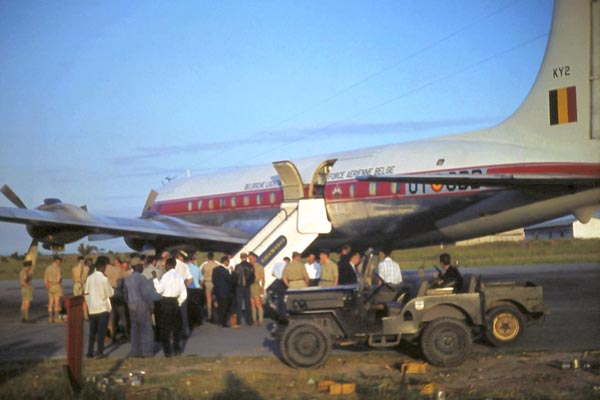 Other air forces also flew into the Congo, as for example this Belgian Air Force Douglas DC-6 at Kamina in 1964 or 1965. Judging from the many Belgian military personnel in the photo, it was likely a flight in support of FATAC, bringing supplies and people to the Congo. There is an M606 with a US Aid sticker on its side in attendance, together with a Minerva TT (Belgian-made Land Rover). (Photo via Michel Huart)

Continue to Part 15: CIA in the Congo or return to the Table of Contents.

The roundel seen at the top of this page was used by the Force Aerienne Congolaise from 1964-1972.