The Congo would become one of the major flashpoints of the 1960s, but the story of the Jeep in the Congo began quite some time earlier and this back story had considerable influence on the later events.

The territory that became the Belgian Congo was colonized in the 1880s from the bits of Central Africa not yet colonized by the other colonial powers. A colonial army, the Force Publique (the FP), was created early on, as a separate force under the local Governor-General, and remained separate from the Belgian Army until independence in 1960.

When Belgium was overrun in 1940, the Belgian Congo declared for the Allied side and remained a major supplier of materials throughout World War II. The FP took part in some campaigns in Africa and elsewhere, and received various equipment from both Great Britain and the USA. For historical and practical reasons, the FP was officered almost exclusively by Belgians. It was largely an infantry force with a very low degree of mechanization. 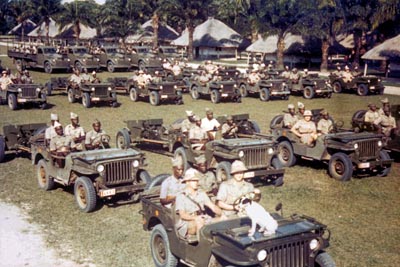 The first jeeps of the Force Publique were Willys MBs (or maybe Ford GPWs) received as military aid, likely in early 1943 but possibly in 1942 already. This early color view shows jeeps parading at a military camp in the Congo with 37 mm anti-tank guns in tow. The crews wear typical FP uniforms of the day, with the white officers and NCOs in pith helmets. Note the Belgian roundels on the sides of the jeeps. (Photo © André Cauvin/www.cegesoma.be ref.140653) 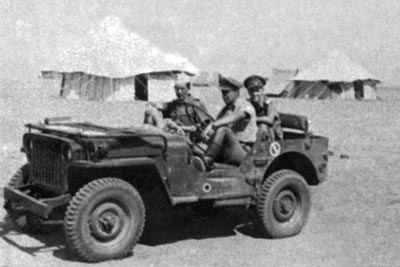 When the Force Publique sent an expeditionary corps to the Middle East in the spring of 1943, it used a number of Jeeps. This MB snapped at Tahaq in North Africa in 1943 carries the lightning-in-circle insignia of the Chasseurs Motorisés ("Motorized Rangers") unit of the FP, in addition to the roundel. (Photo © A.M. Zucker/www.cegesoma.be ref.2056)

After the war the Force Publique returned to its colonial duties, still using Willys MBs in modest numbers. In the early 1950s, Belgium also began stationing some units of its regular, Metropolitan forces in the Congo -- partly for training purposes and partly to maintain a military nucleus overseas, in case of a new war in Europe. It was particularly paratroopers and commandos that were sent to the Congo. 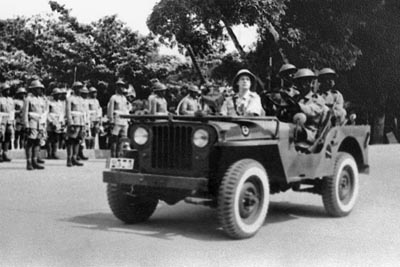 Quite soon after the war, as early as 1947, the Force Publique received some new Jeeps to supplement the original Willys MBs. This CJ-2A belonged to the 3rd Reconnaissance Squadron in Stanleyville in the early 1950s. It had a .30-cal machine gun mounted in front of the passenger seat but retained its windshield. Most unusually for the period, the Jeep was camouflage painted. (Photo via J-P Sonck) 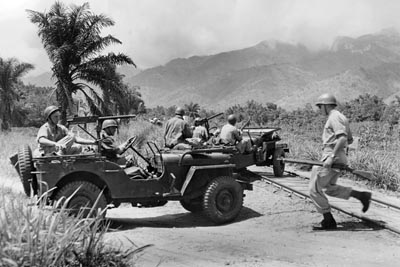 Belgian soldiers of the Metropolitan forces on an exercise in the Kivu province in eastern Congo (see the Congo map) in the 1950s. The road network was often poor and the railway line could therefore make a convenient -- if bumpy -- alternative route. The Jeeps are military CJ-3As from the Belgian production line and have various features that make them similar to the old MBs, such as the rear-mounted spare, the location of the top bows and the handles on the body sides. Note the hand rail in front of the passenger seat, which could be used as a gun support. These Jeeps also have Browning .30-calibre machine guns mounted in the rear: a sight that was to become common in the Congo in years to come. (Photo © Congopresse) 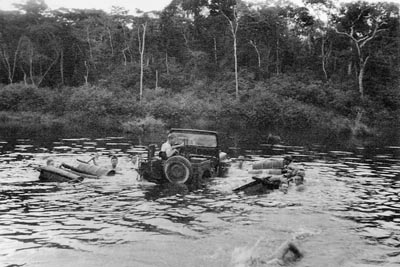 Necessity is the mother of invention. These Belgian soldiers are floating their CJ-3A across the Bomakandi River, near Gombari in the extreme northeast of the Congo, using a contraption of questionable rigidity, built out of empty oil drums and tree trunks. The Metropolitan troops in the Congo did not remain a major user of Willys Jeeps for long, though, and soon traded most of them in for Minerva TTs, i.e. Belgian-built Land Rovers, while the CJ-3As were probably passed on to the Force Publique. (Photo via J-P Sonck)

Although the Force Publique did receive a fair number of CJ-2As and 3As to augment and replace its Willys MBs, the main military Jeep version of the last years of the colony was the CJ-3B, with deliveries beginning in 1953. They most likely came from the CJ-3B assembly line in Belgium and were basically civilian models with a few uniquely Belgian military adaptations. 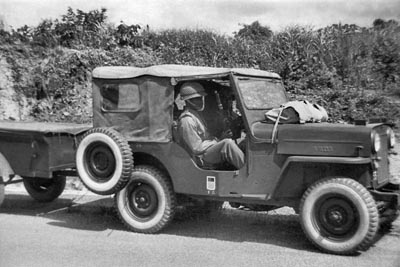 This is a CJ-3B of the Force Publique in normal utility configuration. It was not very common to have the top up, though, except in the rainy season. The side mounted spare wheel was standard for the FP Jeeps but no military accessories or adjustments are readily visible in this view. (Photo via J-P Sonck) 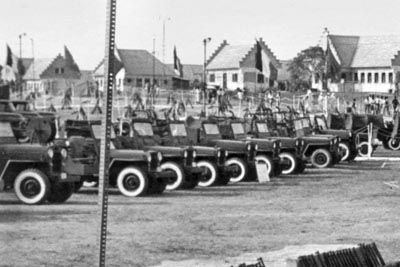 For a time in the mid 1950s, the FP had quite a mixed fleet of Jeeps. This line-up during an open day at the large Camp Leopold in the capital Leopoldville includes CJ-3As, CJ-3Bs and -- towards the far end -- a pair of what looks like CJ-2As, the nearest one with grubby whitewalls. Painting the sides of the tires white for parades was popular with the FP and it was not too common to see a Jeep with unpainted wheels, even in field units. 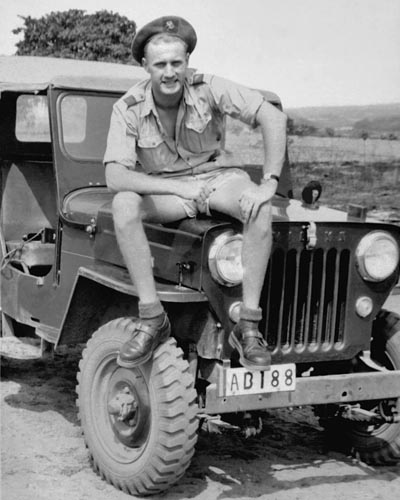 A rare CJ-3B serving with the Metropolitan forces of Belgium rather than the colonial Force Publique, at the Kitona army base in Lower Congo, in September 1954. Metropolitan vehicles could be distinguished by having a five character registration instead of the four characters on FP plates. The mix of letters and digits on this plate is unusual, though. 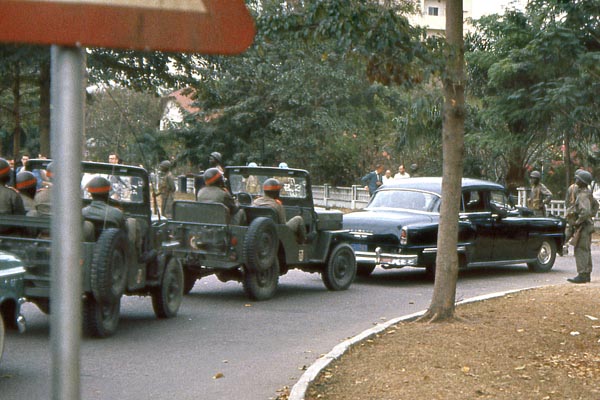 Congolese soldiers in two CJ-3Bs escort VIPs in Leopoldville. The red band around the helmets show that they are gendarmes, up to 1960 officially known as territorial troops. The second Jeep has a AN/PRC-10 radio mounted in an external rack behind the right-hand fender, with the aerial tied down to the rear. Both vehicles have external storage bins bolted to the rear gate but the details do not show up too well in this view. The tires have unaccountably escaped being white-walled. (Photo © Torsten Björklund) 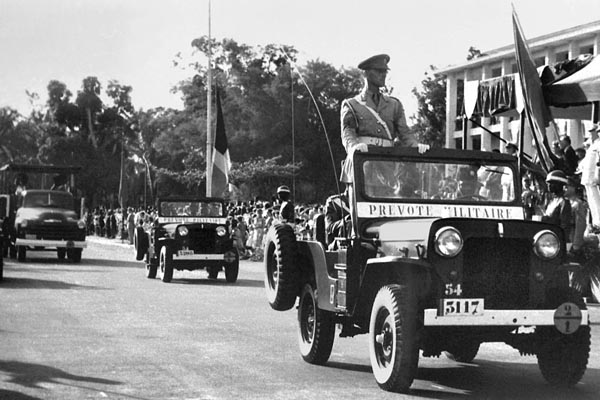 A CJ-3B with a 1954 delivery date marked on the front, in use with the 3rd Military Police Company, of the FP's 3rd Groupement in Stanleyville. The MPs were considered an elite force and were always smartly turned out. Their Jeeps have not only the normal whitewall tires but also white bumpers and hood blocks, and the title Prévôté Militaire in red on white below the windshield. (Photo via J-P Sonck)

The L-shaped turn indicator lights (30K JPEG) seen on the front fenders above, was a common feature in the Congo, as was the externally mounted radio. The early 1950s Chevrolet truck in the background was also a standard vehicle in the FP.

The only FP combat formations of the 1950s that were fully motorized and even moderately modern by contemporary standards were its three reconnaissance squadrons, stationed at widely spaced locations in the Congo. They had the only armored cars in the Force Publique and had at least a modicum of offensive power. A major component of the squadrons was their armed Jeeps, in a concept taken from the Belgian SAS units during WWII. 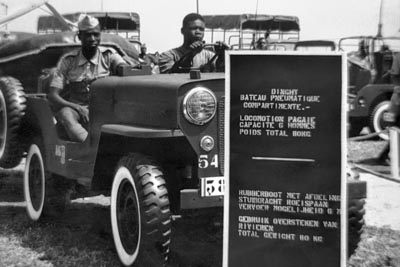 Two bored-looking Congolese soldiers manning a CJ-3B during an open day at an FP camp in the mid 1950s. The Jeep is hooked up to a rubber dinghy on a trailer, as detailed on the bilingual (French and Flemish) sign at the front. The vehicle is not armed but the notched wooden block installed in front of the passenger in lieu of a windshield is no doubt intended as a gun rest. (Photo via J-P Sonck) 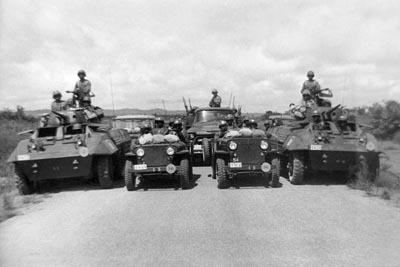 Part of the 1st Reconnaissance Squadron from Jadotville, Katanga province, posing for a photo. At the front, sandwiched between two M8 armored cars, are a CJ-3A and a CJ-3B, in the standard configuration for Congolese reconnaissance Jeeps of the late 1950s. Further back are other Jeeps in more stock configuration. The "chaff screen" (official Willys name) over the grille was a common accessory on all types of Jeeps in the Congo. (Photo via J-P Sonck) 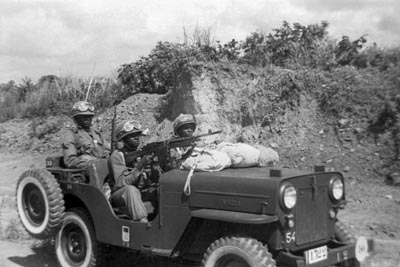 The same CJ-3B as seen in the photo above, during the same exercise. It has a Browning Automatic Rifle (BAR) mounted on a pylon behind the dashboard and as on many armed Jeeps in the Congo, the windshield has been removed. The crew's packs were stowed on the front, both for space reasons and as added protection. Note the L-shaped indicator lights added on the front: this was a more common location than the fenders on FP CJ-3Bs. The marking on the side is a formation sign, indicating the unit and the vehicle number in the column (also repeated on the front). (Photo via J-P Sonck) 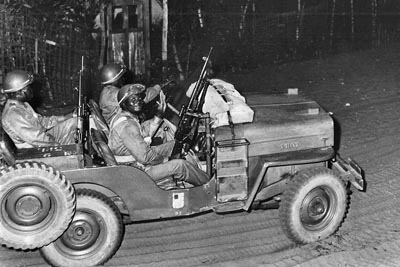 This Belga Press Agency news photo scanned by John Carroll shows a similar Jeep of the 2nd Recce Squadron stationed at Thysville in the Lower Congo, during the Leopoldville riots in January 1959. The gun pylon is clearly visible: it was basically a tube, with a swivelling pintle inserted at the top. Also just visible is the ammunition box mounted between the two front seats while the soldier in the back is sandwiched between additional storage boxes. The radio rack behind the fender is empty. 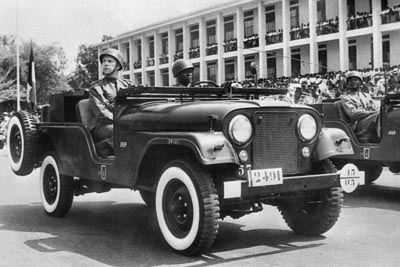 In the last years of the colony, the Force Publique began receiving some round-fender Jeeps, although these were never more than a supplement to the earlier types. This CJ-6 with a 1957 date has the usual chaff screen plus the same type of L-shaped indicators used on the CJ-3B, but in this case mounted on the fenders rather than the grill. The CJ-6s were obtained mainly because they were more roomy and were particularly popular with the military police since they had space for a couple of detainees in the back. These particular Jeeps have an unidentified box structure behind the front seats, however. (Photo via J-P Sonck)

Continue to Part 2: Going Into Decline, or return to the Table of Contents.