The Ford M151 MUTT ("Multipurpose Utility Tactical Transport") is not strictly speaking a Jeep, even if most people refer to it as such. The M606/CJ-3B was getting rather long in the tooth by the mid 1960s and it was inevitable that the USA would soon have to start supplying the Congo with a more modern vehicle instead. The M151 was the obvious choice and deliveries began in 1965, or perhaps even late 1964; the Armée Nationale Congolaise (ANC) at first receiving the M151A1 model. The MUTT did not immediately replace the Willys models, which continued to be supplied in parallel for some time, and the ANC tended to use different types in different units. The M151 therefore became the standard vehicle in 5 Commando from 1965 while 6 Commando continued to favor the M606.

The M151s were initially all delivered in standard, unarmed configuration, and it was only years later that some examples with recoilless rifles were provided. Many of them were, however, fitted with radios. The unarmed MUTTs were used for general staff duties, in the same way as the unmodified M606s (compare Part 10). 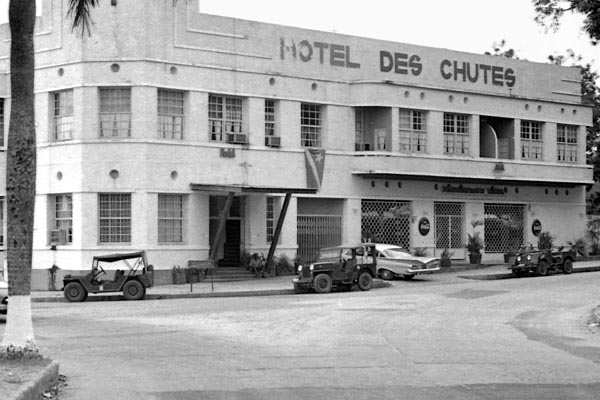 An image that neatly illustrates the three main types of military utility 4x4s in the Congo in the mid 1960s: the M151, the M606 and the Minerva TT (see Part 18). They are all parked outside the Hotel des Chutes in Stanleyville (see the Congo map), which was used to accommodate many of the mercenaries in the city. (Photo © Lars Carlsson) 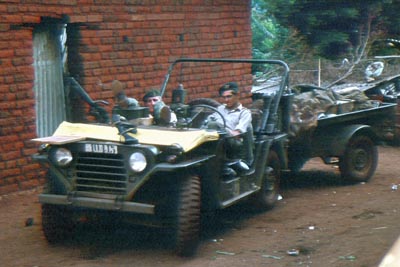 A M151A1 in use with 5 Commando in eastern Congo some time in 1965-1966, with a yellow air recognition cloth across its hood and a US Aid sticker (130K PNG) on the side. The bows at the rear are part of the standard MUTT top bow installation and the vehicle is also fitted with two US Army type antenna mounts at the rear. It is towing a standard M100 Jeep trailer. (Photo © Hugh van Oppen) 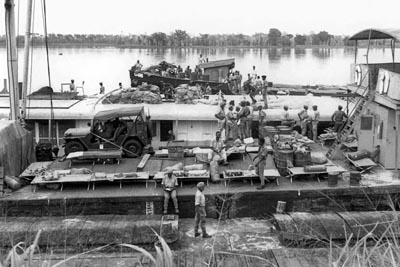 The Congo River is a major transport artery in the Congo and in many cases the only practical way to move large numbers of men and vehicles. Transportation in the 1960s was usually by barge, lashed to a steamer or tug boat. These Congolese soldiers are preparing for a lengthy journey and have set up their cots on the deck of a barge, next to a M151A1 also fitted with a radio installation. (Photo via Michel Huart) 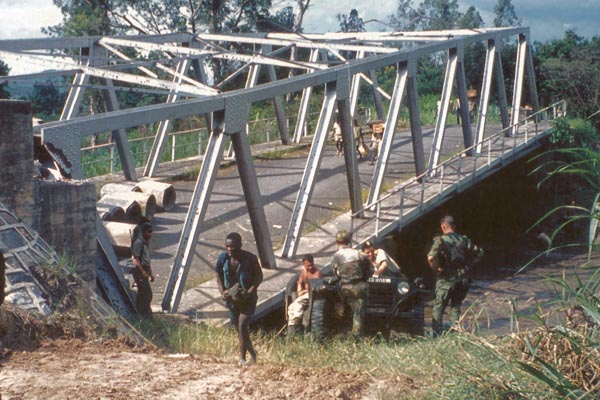 Many of the countless bridges in eastern Congo were damaged or destroyed during the fighting in the 1960s. This is the Kamanyola bridge near the town of Bukavu (see the Congo map) where General Mobutu supposedly rallied his ANC troops to stop a rebel advance in 1964. Some mercenaries with an M151 are guarding the approach to the temporary ford below the smashed bridge. (Photo via Belgian Military Archives) 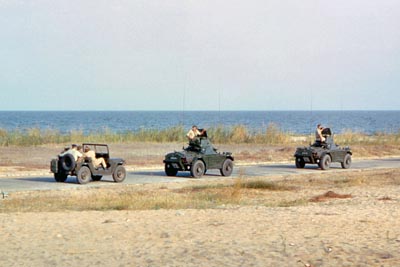 A final image of an unarmed MUTT, showing General Mobutu (with a red cap band) in the front seat of an M151 during a visit to Albertville (see the Congo map), being escorted from the airport by two Ferret armored cars of 5 Commando. Behind them is Lake Tanganyika: the largest lake in Africa. (Photo © Larry Murphy)

Many of the M151s used in the Congo were armed in much the same way as the M606s of the ANC, and were used for the same kind of assault missions. These armed MUTTs served mainly with 5 Commando during its operations in northeastern and eastern Congo. 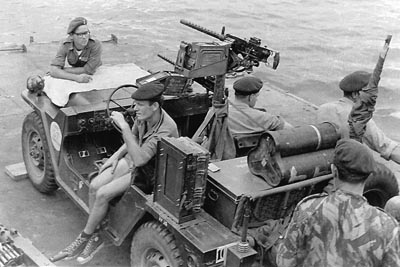 This armed M151A1 is sitting aboard an invasion barge on Lake Tanganyika, during the assault on the Baraka area in September 1965. The marking on the side shows that it belongs to 57 Commando: a part of 5 Commando. The windshield has been removed and two Browning .30-caliber machine guns fitted on two pylons. The radio installation is in this case not per US standard for the M151 and has been done locally -- obvious enough since the antenna mount is placed onto the licence plate.

An additional photo shows several MUTTs on a barge (90K JPEG) during the same operation; some armed and some not. (Photos © Iain Peddle) 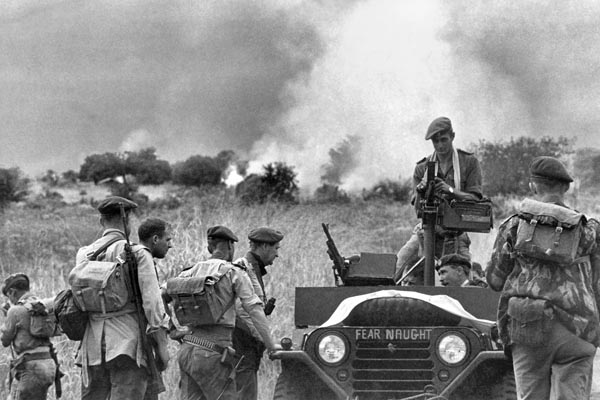 "Fear Naught" was the MUTT used by Captain Hugh van Oppen of 5 Commando as a command vehicle in the Baraka operation. It has a similar gun installation to the vehicle above but has also been fitted with an armor shield: one of the few armored M151s seen in the Congo. Immediately to the left of the vehicle is Colonel Mike Hoare, the commander of 5 Commando at the time. (Photo via James MacKenzie) 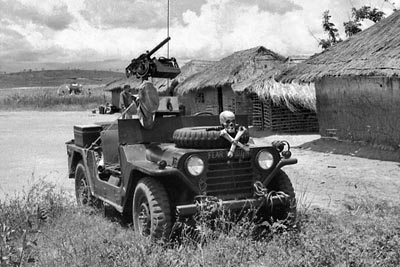 A second image of the same M151 at Baraka gives a clearer view of the armored screen. It seems none of the MUTTs had any armor on the front, to protect the radiator. In the background is the medevac helicopter provided by the CIA.

Another photo shows some additional details of the front (120K JPEG). In the background is the medevac helicopter provided by the CIA. (Photos © Bob Houcke) 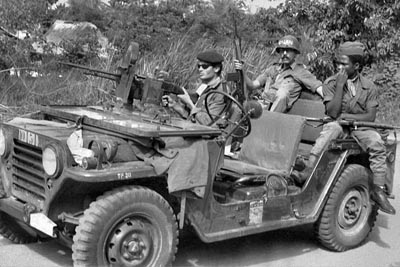 This M151A1 was used by a Spanish mercenary unit in north-western Congo created within 6 Commando in 1965 and had been fitted with a machine gun mount with armored glass, taken from a retired Minerva TT reconnaissance vehicle (see Part 18). Only a single FN MAG was installed in the double mount, however. The original windshield was retained but could not be raised as long as the gun was fitted. It is quite possible that some of the Minerva mounts were successively used in three or four different vehicles of different types over the years. (Photo © Vicente Talon) 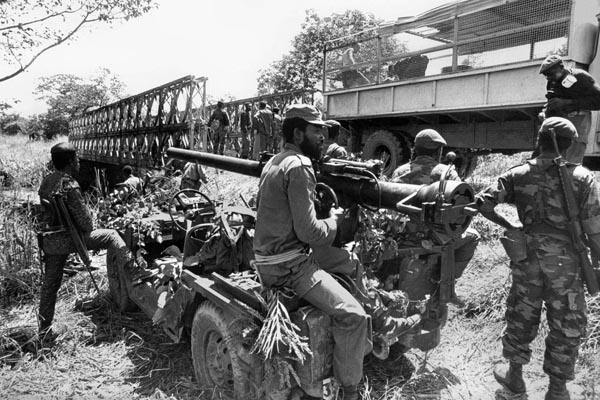 By the mid 1970s the MUTT had likely entirely replaced the proper Jeeps in military service in Zaire (renamed from the Congo in 1971).

In 1977 and again in 1978, former Katangese soldiers from Angola occupied the town of Kolwezi (see the Congo map) and were only defeated with the help of French and Belgian troops. This is an M825 -- i.e. an M151A2 fitted with a 106 mm recoilless rifle -- belonging to Zairian forces guarding the bridge at Mutshatsha on the main road to Angola in May 1977, to prevent further incursions.

Continue to Part 18: Land Rovers and Other 4x4s or return to the Table of Contents.