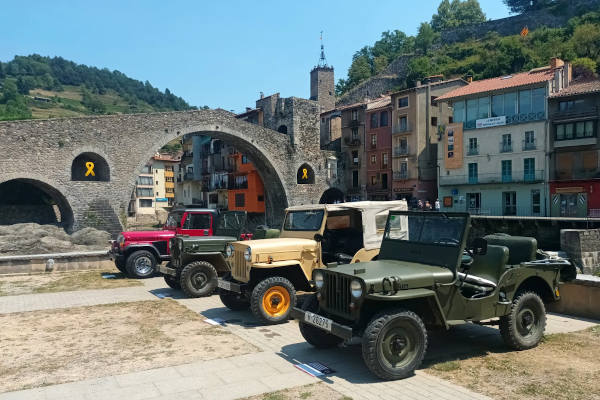 After a very successful event in 2021, the Jeep weekend known as Camprodon, Terra de Jeeps ("Camprodon, Land of Jeeps") was held again this summer in the town of Camprodon, Spain.

Nestled in the Pyrenees mountains, north of Barcelona (330K map), Camprodon has been called the Jeep Capital of Spain. Nearly a hundred Jeeps from the town and around Catalunya and elsewhere in Spain, and even from France, participated in the event. 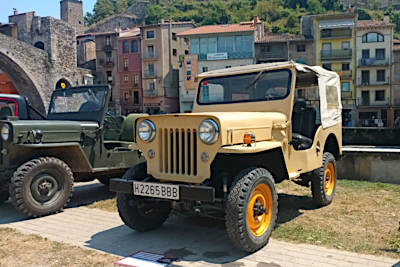 Posed in front of the town's iconic 12th-century bridge over the Ter River was a group of participants including the only CJ-2A residing in Camprodon, painted and detailed as a military Jeep (above.) Beside it was a visiting Willys CJ-3B with a BBB license plate and a brilliant paint scheme reminiscent of a Willys 2A in Harvest Tan and Sunset Red. 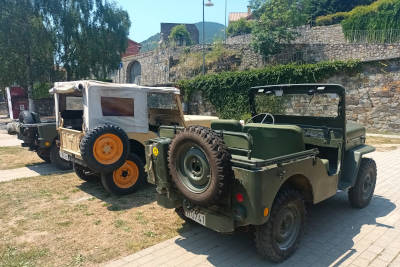 There were of course more CJ-3Bs in attendance than you would ever see at an event in North America, because Willys high-hood Jeeps were imported into Spain starting in 1953, and then built by VIASA and EBRO into the 1980s. The majority were diesel powered, and many were sold to the Spanish Army. 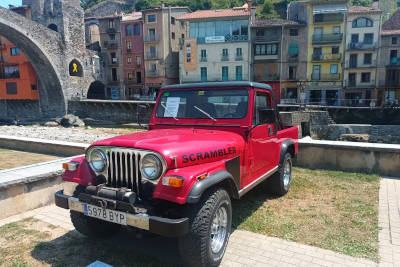 On the other hand, a CJ-8 Scrambler is even more rare in Spain than it is in North America, but this President Red CJ-8 was back at Terra de Jeeps for the second year in a row. 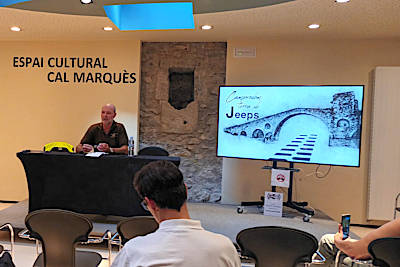 The owner of the Scrambler is Javier Martínez, a well-known Jeep restorer and contributor to the Spanish book Historia del Jeep (50K JPEG), edited by Juan Peláez. Javier spoke on the Saturday afternoon in one of the conference sessions organized at the Camprodon cultural center. He's seen here with the Terra de Jeeps logo of an NDT tire track under the famous bridge. 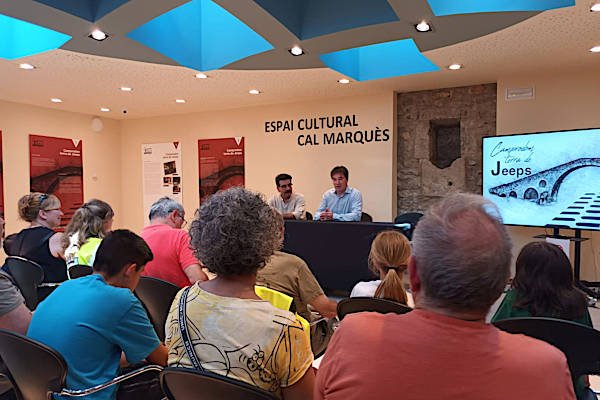 Another conference session on Saturday morning had local mechanics Alejandro Cuadrado and Joan Busquets talking about the first surplus jeeps that arrived in the town (see The Jeeps of Camprodon) and telling Jeep stories from the years since then. 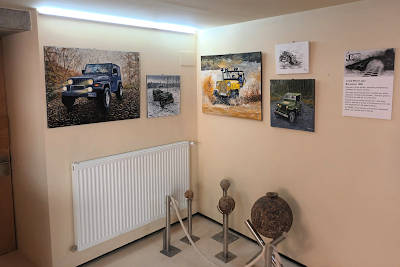 In the cultural center there was also a small exhibition of photos, Spanish Jeep literature, and this series of paintings of Jeeps by the artist Josep Maria Lujan. 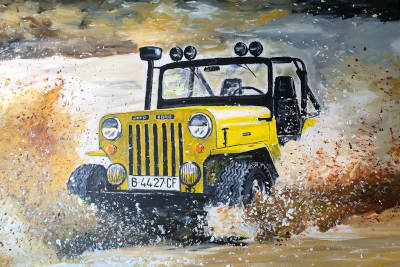 CJ-3B fans enjoyed this piece by Lujan, portraying a driverless EBRO Bravo blasting through a water crossing! No word on whether the painting was sold. 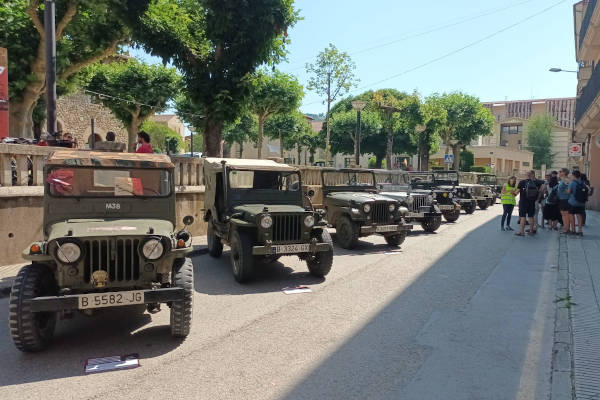 Of course the centerpiece of any Willys event is the display of vehicles, and in Camprodon they again took over pretty much the entire beautiful, historic center of town. The post-WWII military Jeeps were in Plaça de Santa Maria.

A journalist from the magazine Motor Clasico (100K JPEG) was on hand to cover the event, and no doubt took lots of photos. 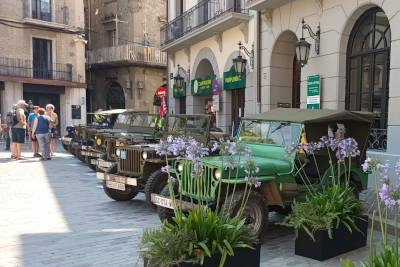 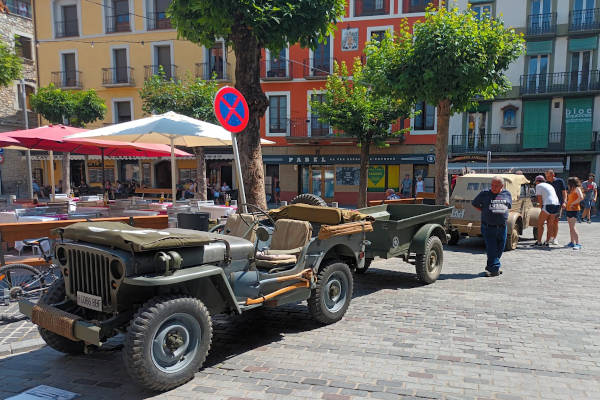 Lined up in Plaça de la Vila were the Willys MBs and other WWII vehicles, including not only the GPWs, but also this time a German Volkswagen Kubelwagen ("bucket car") for comparison (seen here in the background.) 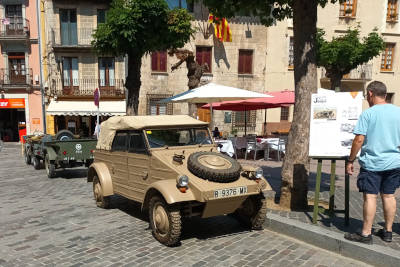 Terra de Jeeps displayed lots of documentation on the vehicles, including the Kubelwagen, which went into production earlier than the jeep, in 1940, but unlike the jeep was rear-wheel-drive only. 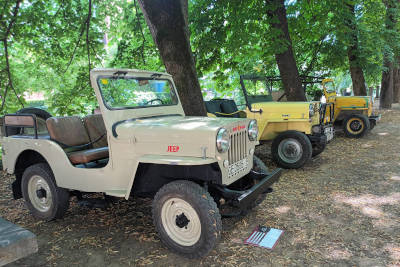 The Sunday morning conference session featured Ferran Sibila, president of the Autos Històrics club, discussing issues including the difficulties created by Spanish regulations for vintage vehicles. He explained that clubs are negotiating with the government, seeking changes. (One of the problems is described in The Jeeps of Camprodon on CJ3B.info.)

Seen here are a VIASA and two EBRO Bravos belonging to owners in the Camprodon area. 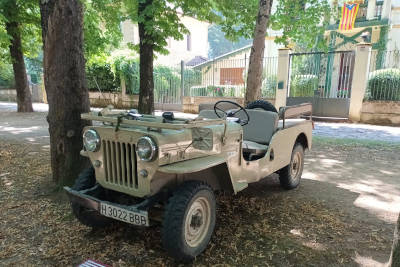 The long-wheelbase CJ-3B was called a CJ6 by VIASA (see Room for Sunbathing: LWB Jeeps in Spain on CJ3B.info.) This local CJ6 is Hurricane-powered rather than diesel. The BBB license plate is actually just a coincidence; many of the historical vehicle plates (starting with "H") end with BBB. 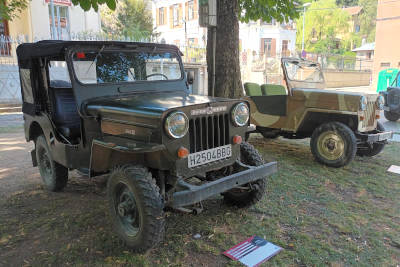 The EBRO Bravo S was the deluxe version that came with locking hubs, roll bar, soft top and bucket seats as standard equipment. 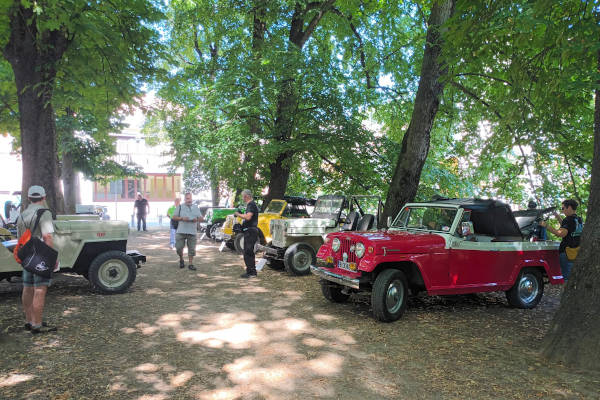 This year for the first time, there were three Comandos in attendance. VIASA and EBRO both built Comandos, in the 1970s and early 80s (and yes, Comando was spelled with one "m" in Spain.) 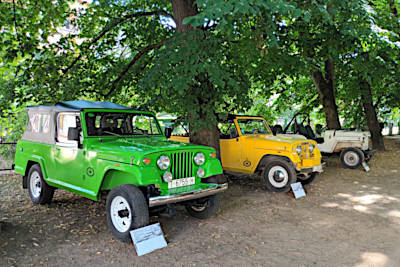 The representatives of Club Jeep Comando brought a real splash of color to the "Jeeps of the World" display in this beautiful setting under the trees. 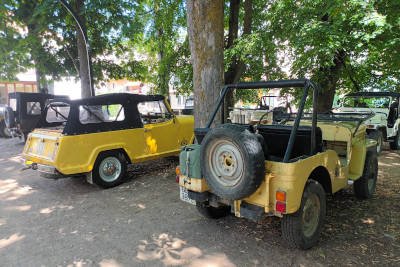 The Spanish Comandos had a slightly larger Perkins diesel than the Bravo CJ-3Bs, which gave them an advantage when they competed against each other in the Jeep Cross rally races in the 1970s. 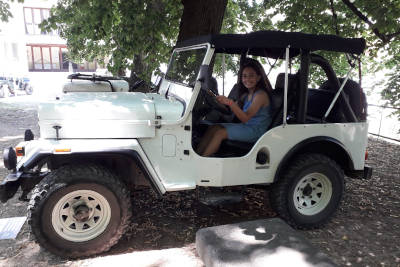 Most of the "Jeeps of the World" on display were built in Spain, but here's a Mahindra CJ340, with a driver who will soon have her own driving license!

Mahindras assembled in Greece were imported into Spain in the early 1990s, and a few were sold in the Camprodon area. 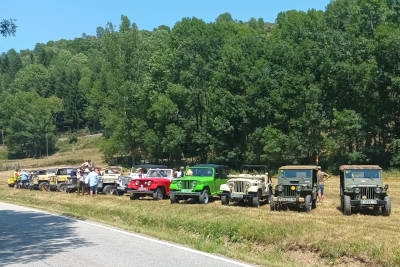 Saturday and Sunday finished with group Jeep trips around Camprodon. Saturday evening was a drive to Sant Antoni mountain and Sunday afternoon (seen here) to the small town of Espinavell. 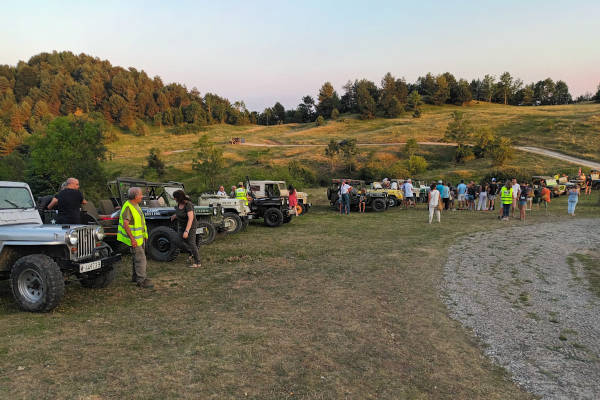 With over forty vintage Jeeps residing in this town of 2,500 people, you know there are a lot of Willys lovers who live here, and many of them worked as volunteers to welcome the visitors and make Camprodon, Terra de Jeeps a great event.


Thanks to Josep Bordas for the photos. See photos from the 2021 edition of the festival, in Camprodon, Land of Jeeps.

If you're thinking of visiting the Valley of Camprodon, see Camprodon.cat for tourist information.