Touring the "Jeep Capital of Spain" with Josep Bordas 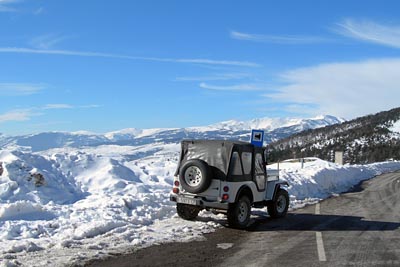 Snowy mountain peaks aren't the first thing that come to mind when you think of Spain, but the Pyrenees mountain range that runs along the border between Spain and France has a true alpine climate. The eastern Pyrenees, in the region of Catalunya, are home to popular ski resorts, snowy mountain roads perfect for Jeep excursions, and beautiful villages with buildings dating back to the 10th century. 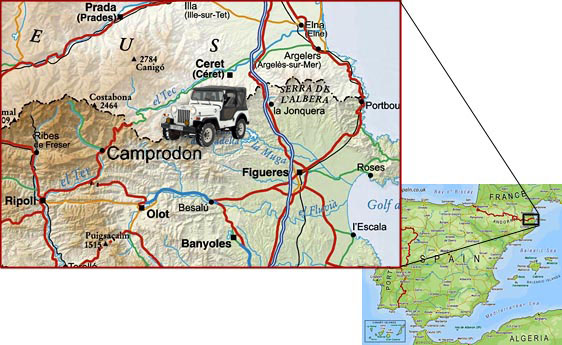 The Valley of Camprodon is one of the Spanish gateways to the eastern Pyrenees, including the peaks of Costabona and Canigó on the French side (white area on the map, left). The area is popular with vacationers in summer, but is equally beautiful and a little bit quieter during the winter.

And there are lots of flatfender Jeeps. Josep Bordas, a part-time resident of the village of Camprodon, took pictures of all of them a few years ago, for The Jeeps of Camprodon on CJ3B.info. 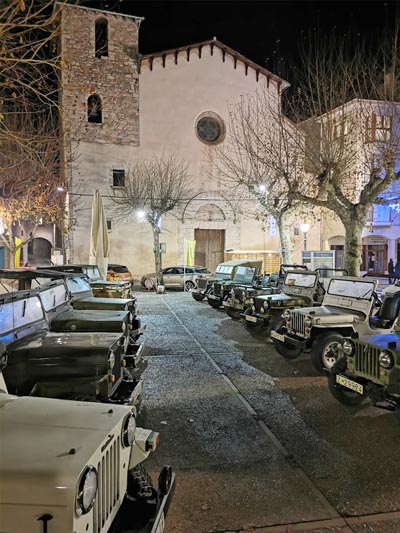 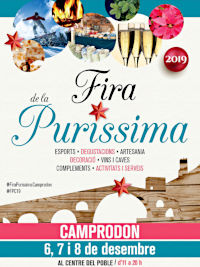 The village held its second annual exposition of Willys Jeeps, during the 73rd Festival of La Puríssima, 6-8 December 2019. This year the venue for the Jeep display was moved to the plaza in front of the Església de la Mare de Déu del Carme (Church of Our Lady of Carmen).


Josep sent this beautiful photo by Juan Garcia-Nieto Portabella of the Jeeps in the plaza. Josep's Mahindra is in the foreground.

See also photos of the previous year's event, in Camprodon: Jeep Capital of Spain on CJ3B.info. 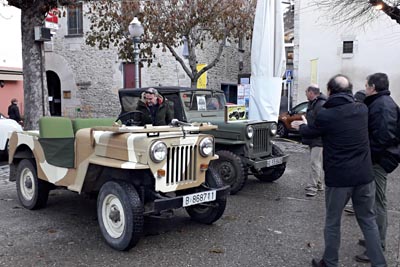 The exposition brought out many of the Jeeps which otherwise would be in storage in the winter, waiting for warmer weather. This Spanish-built VIASA CJ-3B was recently repainted in a camo scheme. Definitely a good step towards giving the Jeeps of Camprodon a few more bright colors! 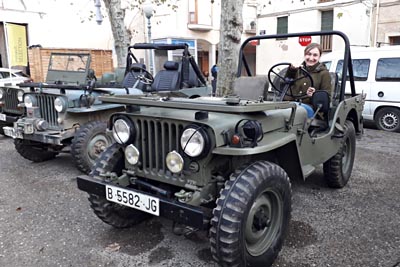 Rocío Busquets is the owner of this M38. Josep says Rocío is the cousin of local Jeep mechanic Joan Busquets, who restored the MC, and she is the daughter of the late Pere Busquets, who had a lot to do with making Camprodon the "Jeep capital of Spain" when he sold an estimated 100 military surplus Jeeps in the area. 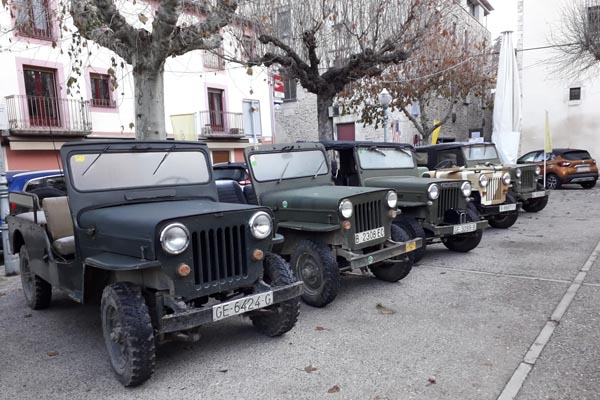 Some of the high hoods on hand included (from left) an early long-wheelbase EBRO BravoL and a late Bravo (circa 1980), both with Perkins diesel power. Then a Spanish Army surplus VIASA CJ-3B with a Barreiros diesel. Down at the end of the line, another VIASA, belonging to local mechanic Alejandro Cuadrado, who uses it to take his dogs hunting.

In all, nineteen Jeeps were displayed for three days, attracting lots of attention from festival-goers. The event was organized by Jeep owners and the City Council, and Josep says there is talk of expanding the exposition next year to include Jeeps from across Catalunya. 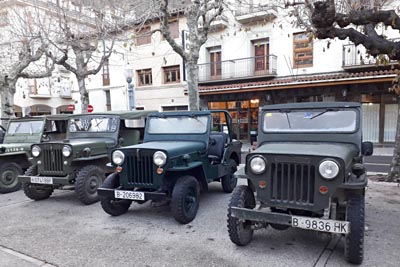 More CJ-3Bs on display included (from left) a possible Willys M606, a Hotchkiss JH-101 from France with a Go-Devil engine, and one of the earliest Jeeps fully manufactured in Spain, badged as a "Willys-VIASA".

A rear view reveals what looks like a very complete Willys M606, possibly supplied to the Spanish Army as U.S. military aid. We're looking for the details on this Jeep.


Tour of the Valley 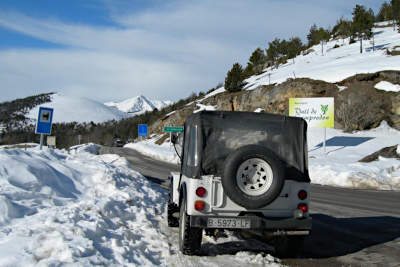 At the entrance to the valley, the road sign with a picture of an antique camera is hardly needed to tell visitors this is a great spot to grab a shot of a spectacular mountain vista.

Camprodon is also a great spot to photograph Jeeps, as it has undoubtedly the highest concentration of flatfenders in the country. Today though, Josep and his wife Gemma are driving through the valley and up into France to show us the snowy scenery. 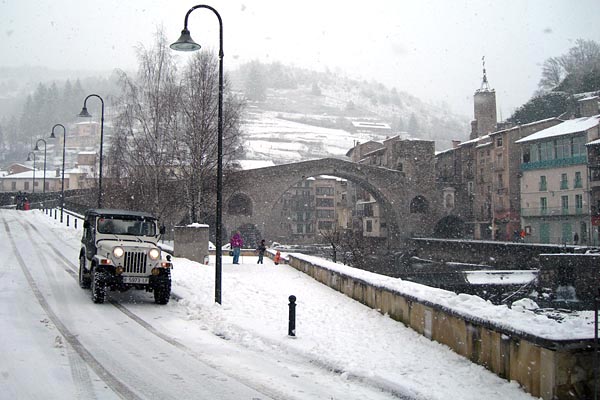 One of the tourist attractions in the village of Camprodon is El Pont Nou ("The New Bridge") which has weathered the snowfalls of over 800 winters since its construction in the 12th century. A more recent addition is lights outlining the bridge (150K JPEG) for the Christmas season.

As snow started falling again, Josep took this picture in the same place we had photographed him in the summer of 2008 (see CJ3B.info Visits Spain, Part 3: Camprodon.) 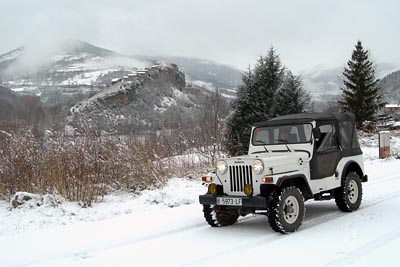 Another spot we had photographed on our summer visit to the valley was the cluster of houses clinging to the aptly-named La Roca ("The Rock"), which looks even more inaccessible in the winter.

Not surprisingly, La Roca is home to a Jeep; the M38 of Joan Andreu Pons (190K JPEG) is a Korean War veteran which subsequently saw service with the Spanish Army. Joan Andreu is one of many Jeep owners we have met in Josep's directory of the Jeeps of Camprodon. 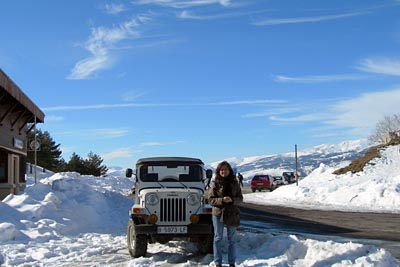 Gemma waits for Josep as they prepare to drive up through the old pass of Coll d'Ares between Spain and France, north of Camprodon. Coll d'Ares was one of several ways used to escape into France in 1939, by half a million Republicans fleeing at the end of the Spanish Civil War. The exodus on foot through the mountains in the winter, known as "La Retirada," is commemorated in a museum we visited in Camprodon in the summer of 2008. 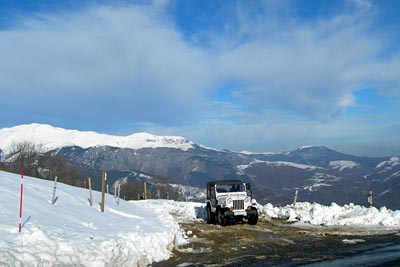 This part of southern France was part of Catalunya several centuries ago, and is still known as La Catalunya Nord ("North Catalunya".) Mt. Canigó in the background is a symbol of Catalunya, and in the annual Flama del Canigó festival up to 30,000 bonfires across the region are lit with torches carried from a blaze at the peak. The mountain is also the site of a grueling annual marathon race to the top and back, and some spectacular 4x4 trails. 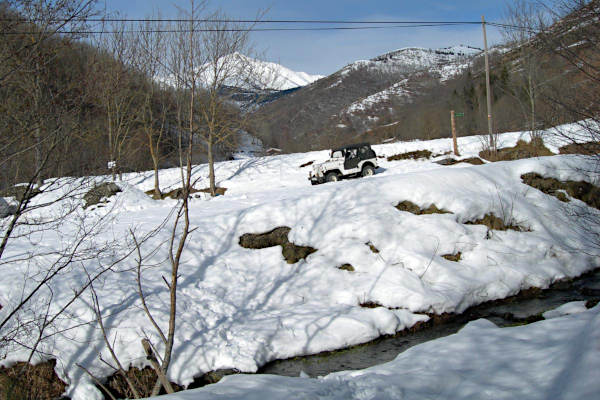 Back in Spain, Josep took this shot near the little village of Espinavell, with Mt. Costabona across the border in the background. Although there is plenty of snow in the mountains, the winters in the Pyrenees aren't what they used to be. According to a 2004 report, 85% of the glaciers in the Spanish Pyrenees have melted due to climate change during the 20th century, including 50% between 1980 and 2000. 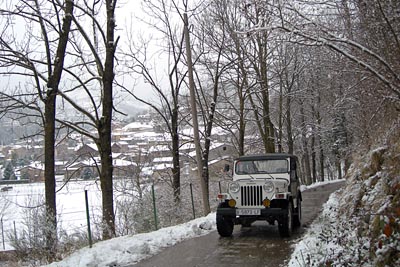 On the road home, Gemma waits in the Jeep as Josep takes a picture overlooking the village of Llanars, another small but historic village in the Valley of Camprodon, which has been a trading route since the time of the Celts and the Romans. The first recorded appearance of the name "Llanars" was apparently in the year 1027. 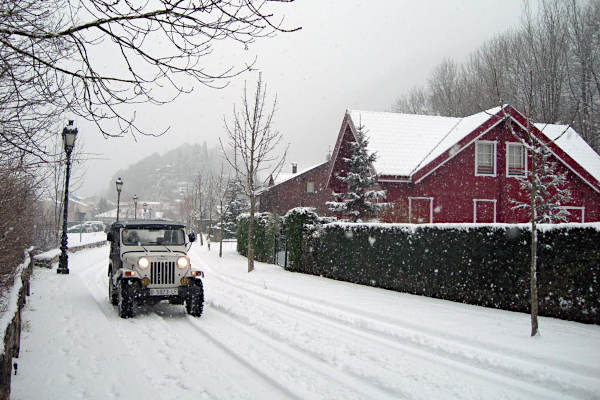 Our December 2009 cover photo was a Christmas card from Camprodon for all readers of CJ3B.info. As dusk falls, Josep's Mahindra is seen in the part of Camprodon known as La Forcarà because it's near La Font de la Forcarà, one of many fountains or springs in Camprodon that run all year long with clear mountain water. Let's hope they keep running.

Thanks to Josep and Gemma for the tour. Josep has been continuing to document all the flatfenders in the area, and we have now published his detailed story of the Jeeps of Camprodon on CJ3B.info. -- Derek Redmond

The map is taken from an excellent interactive map at the Institut Cartogràphic de Catalunya.