The Jeeps of Camprodon


As of 2010 there are over 40 vintage Jeeps still operational in the area around Camprodon, Spain, a town of only 2,500 inhabitants. And what makes this concentration of early Jeeps unique not only in Spain but probably in the world, is the fact that it includes Jeeps from all but one of the major worldwide manufacturers: Willys (U.S.), Hotchkiss (France) and Mahindra (India) as well as VIASA and EBRO (Spain). The only badge missing is Mitsubishi (Japan) which is a bit ironic since many of the newer vehicles now replacing the old Jeeps are Japanese SUV's. 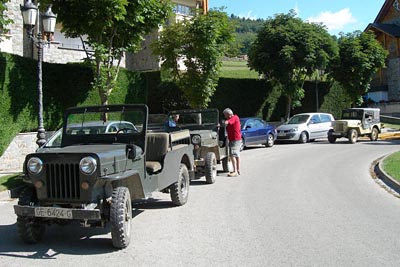 It's not unusual to find a lineup of CJ-3Bs on a residential street in Camprodon. But this is not a parade organized by Jeep owners willingly, to show off their vehicles and have fun. No, it's a government requirement.

This remarkable community of vintage Jeeps in the Valley of Camprodon, nestled in the Pyrenees Mountains, is all the more surprising considering the bureuacratic nightmare in which Spanish flatfender owners find themselves trapped. 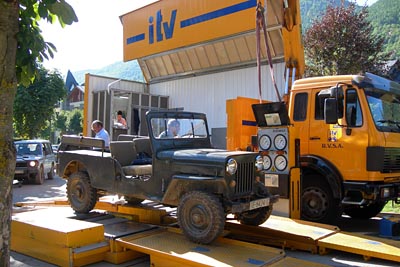 As in many countries, vehicles in Spain more than 4 years old must pass an inspection every 2 years by the ITV (Inspección Téccnica de Vehículos). And residents of northern Spain, who know the effects of climate change on the glaciers of the Pyrenees, are supportive of efforts to control vehicle emissions.

But a Jeep is considered a commercial vehicle by the ITV, and as such must pass inspection every 6 months. The only way to avoid this is registration as an historic vehicle, which is a prohibitively expensive and lengthy process. 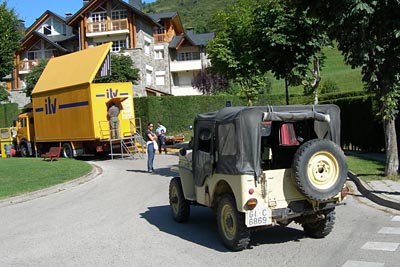 Although Camprodon is still an agricultural area, the economy is now largely based on tourism and recreation, and the Jeeps are the complete oppposite of commercial vehicles. Most of them are used only in the summer, and don't cover a lot of kilometers during those months, so the ITV requirements seem particularly unreasonable. As a result, many of them may not be on the road much longer.

The town is the gateway to a lovely agricultural and recreation area known as the Valley of Camprodon in the Catalunya region, less than 100km (60 miles) from the Mediterranean coast (see the location map in Winter in Camprodon on CJ3B.info.)

For a look at the beautiful scenery of the area, see our gallery of Josep's photos of Camprodon: Jeep Capital of Spain, as well as our 2008 article CJ3B.info Visits Spain.

But why the unusual number of Jeeps in this small, quiet and somewhat isolated area? Of course they are suitable for the mountainous terrain, and beginning in the 1950s farmers bought them for use in their livestock operations. Many were diesel-powered CJ-3Bs built by VIASA at its factory in Zaragoza, a few hundred kilometers west. (Imported Willys flatfenders were also often given a dieselizado conversion.) However, they have survived into the 21st century more for their value as fun vehicles than as farm machinery. 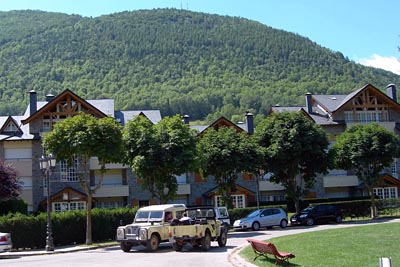 In the 1960s and 70's, the only 4-wheel-drive choices in Spain were Land Rovers and Jeeps, both of which were manufactured in Spain as well as imported. The Spanish-built Land Rover "Santana" (150K JPEG) was very popular in Camprodon as a working vehicle because it had more cargo space than a Jeep, and there are still a few around.

Surplus military Jeeps from the Spanish army included MB's, M38's, CJ-3As and M38A1s. They were sold mainly to people wanting to use them for recreation, because of the higher cost of operation of their gasoline engines. Many of these found their way to Camprodon which was becoming an increasingly popular tourist destination, known for both ski hills and summer homes. 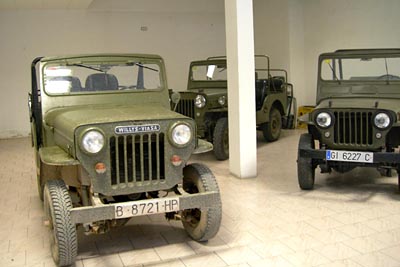 One entrepreneur apparently sold over 100 surplus military Jeeps in the Camprodon area, and some of these are undoubtedly still among the many olive drab VIASA CJ-3Bs and Willys 3A's and M38's seen around the valley.

Joan Busquet, a nephew of that army surplus dealer, is a mechanic in Camprodon who still maintains a small showroom which usually holds a few vintage Jeeps for sale (left.) Busquet's garage is one of several which look after the Jeeps of the area. Other mechanics specializing in Jeeps are Alejandro Cuadrado (in Camprodon), Jordi Tosca and Joan "Santigosa" Aulinas (also in Camprodon) and Andreu Carrera (in nearby Llanars.) 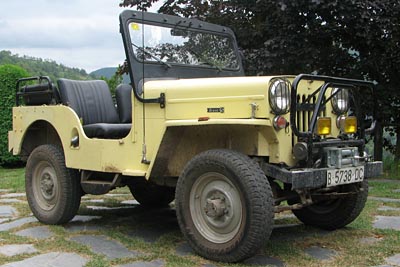 Other 4-wheel-drive vehicles, particularly Japanese SUV's, began arriving in the valley in the 1980's and have taken over most of the market. But the old Willys (1950s), VIASA (1960s-70's) and EBRO (1970's-80's) Jeeps have remained popular as summer recreational vehicles. 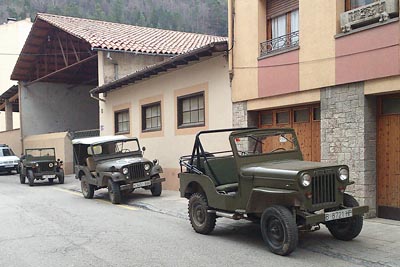 On the village streets and the mountain roads you will see plenty of morro bajo ("low nose") Willys and morro alto ("high nose") 3B's of Spanish origin, and even the occasional morro redondo ("round nose") CJ-5 or M38A1.

In the early 1990's, Mahindra CJ-3Bs from India were imported into Spain, and there are a couple of those in Camprodon. Surprisingly only one Hotchkiss CJ-3B built in France seems to have made its way across the nearby border and found a home here.

Josep Bordas has spent more than a year photographing all the early Jeeps in the valley, and speaking to as many of the owners as possible. Here's the information we have on each, including the owners' names where possible, so that if you have a chance to visit the area you can give them a wave and say hola. The Jeeps are roughly in order here by model, from oldest to newest.

I would like to thank all the owners of Jeeps that appear in the photos for their kindness and enthusiasm with us in preparing this article. And especially the mechanics that we have visited, for information on the Jeeps, and for making it possible for these vehicles to continue to drive through the roads and trails of the Valley of Camprodon. -- Josep Bordas

And thanks to Josep for finding all the Jeeps. -- Derek Redmond

See the scenery of Camprodon: Jeep Capital of Spain, and my 2008 article The CJ3B Page Visits Spain.