The town of Camprodon in Catalunya is famous for its ski slopes and cuisine, and has been a destination for tourists from Barcelona since the late 1800's. It's also home to a surprisingly large number of vintage Jeeps -- over 40 in a town of 2,500 residents! 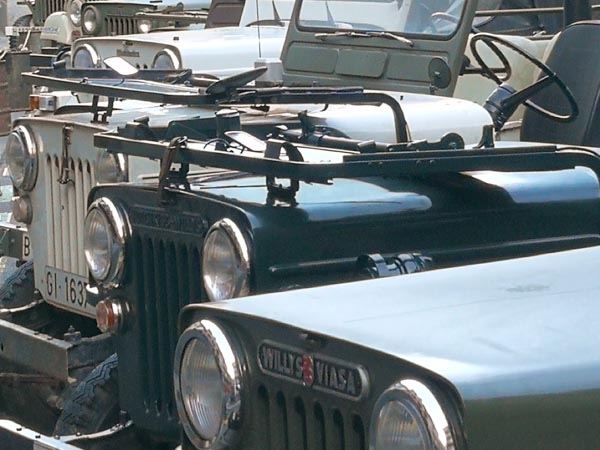 In December 2018, the town decided to celebrate the fact that it's becoming known as the "Jeep Capital of Spain", and held a three-day display of local Willys vehicles in the central square, during the annual festival of La Puríssima.

Thanks to Josep Maria Corbella for these photos of the display. 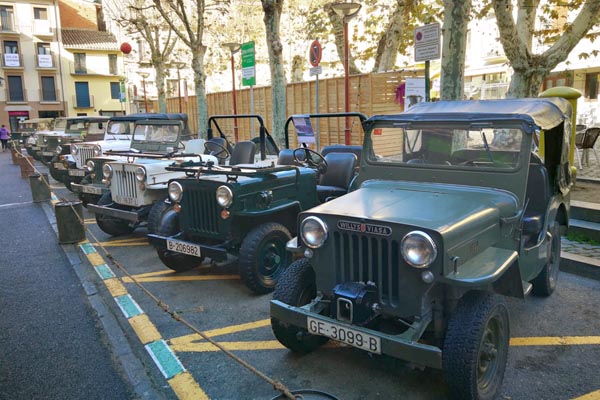 What a diverse collection of high hoods: a Spanish CJ-3B with a Willys-VIASA badge in the foreground, then a French Hotchkiss JH-101, a Spanish EBRO Bravo, a Willlys CJ-3A in olive drab, a white Mahindra CJ340, and more Willys and VIASA Jeeps in the backkground. 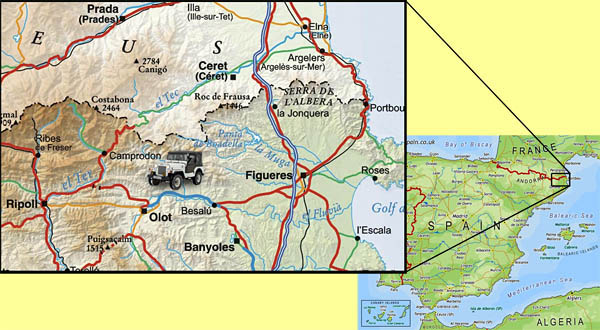 The Valley of Camprodon is in the Pyrenees mountains, located at the confluence of the rivers Ter and Ritort. It is best known today for its Romanesque architecture, mountain spring water and skiing, but was once the home of the the president of the Republic, during the Spanish Civil War.

In 2008 CJ3B.info dubbed it the "Jeep Capital of Spain", and the name is catching on. 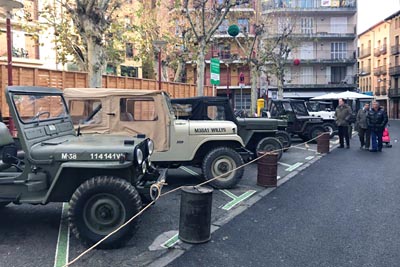 This view looks from the other side of the square, where a total of 14 Jeeps were on display in December. Here a Willys M38 is joined by an export CJ-5 badged as an M38A1. Other Willys vehicles included in the lineup were an MB, CJ-2A and CJ-3A. 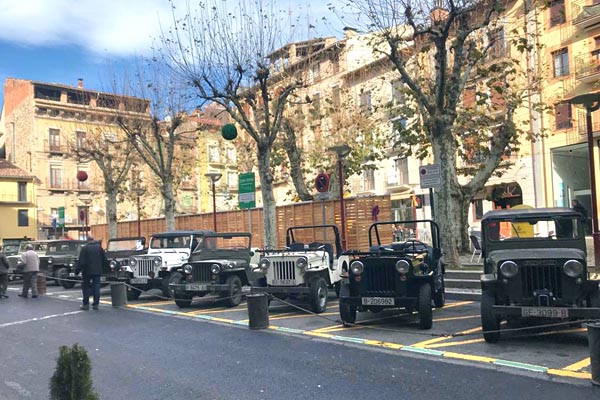 Details on all of these Jeeps can be found in The Jeeps of Camprodon on CJ3B.info.

See also Camprodon, Land of Jeeps for the 2021 event when they invited Jeeps from across Spain. 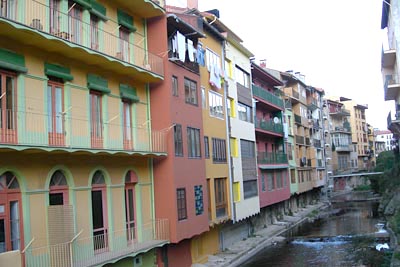 One thing missing from the Jeeps of Camprodon is much variety in color. The vast majority are dark green, partly because many of them are former miltary vehicles. I would love to see more of the Jeeps' owners opt for different colors, like these brightly painted residences along the Ritort River. 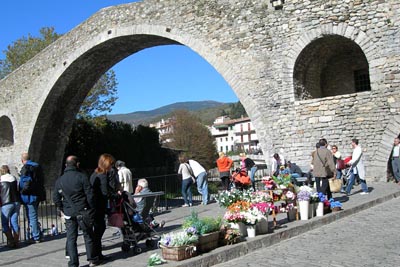 Lots of color also at the flower market beside the famous 12th-century Pont Nou ("new bridge") over the Ter River. See also a wider view (200K JPEG) of the beautiful bridge. 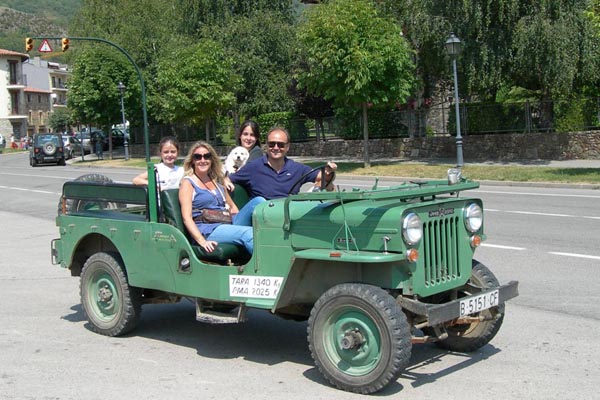 The long-wheelbase EBRO Bravo L makes a great family vehicle. Jordi Espinac with his wife Georgina and their daughters (and the dog) were photographed in the nearby village of Llanars. 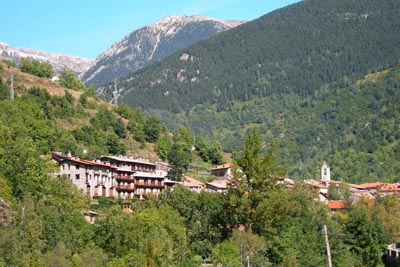 The Pyrenees mountains are what make the Valley of Camprodon a valley, and provide the beautiful backdrop for the villages along the two rivers. 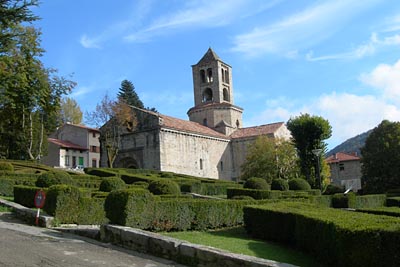 One of the big tourist attractions in the center of Camprodon is the 10th-century Monastery of San Pedro. 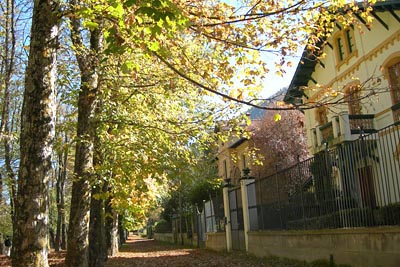 Some of the stately houses on the old avenues were briefly home to the Republican government during the Civil War. 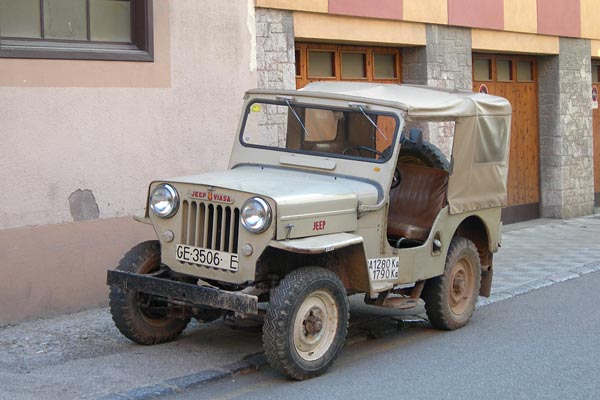 This very nice original VIASA CJ-3B was a mystery Jeep, #43 on our list of The Jeeps of Camprodon, and seen only from a distance until Josep took this recent photo. 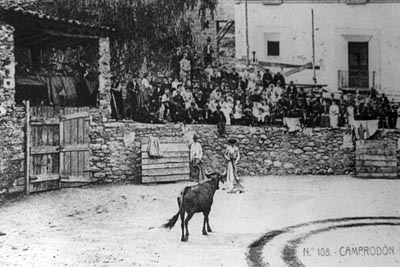 An early-20th century photograph of Camprodon shows the bullring, which no longer exists in the town. (And bullfighting is now outlawed in Catalunya.) Camprodon is rich in history, and there is a museum devoted to Catalan composer Isaac Albéniz, born here in 1860. 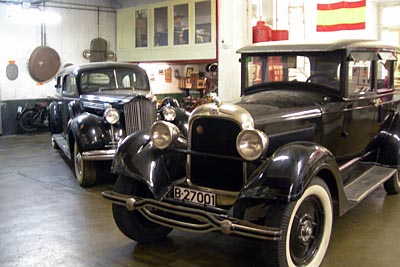 There is also the Museo La Retirada ("Museum of The Retirement"), with an exhibition of equipment and weapons (130K JPEG) abandoned by the Republican troops in the Valley of Camprodon on their withdrawal to France during the Spanish Civil War. 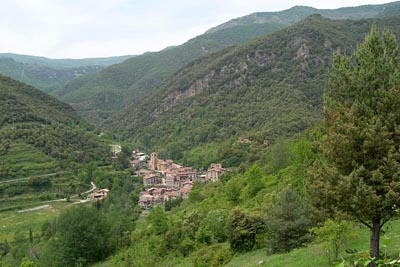 This is Beget at the eastern end of the valley. See also Molló (140K JPEG) to the north, which since the time of the Romans has linked the Valley of Camprodon with France through the old pass of Coll d'Ares. 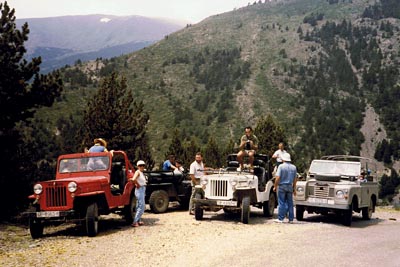 More history: Joan Busquets, one of the Jeep mechanics of Camprodon, took some photos of trips through the Pyrenees, circa 1987. Here, a Spanish Land Rover joins a convoy of CJ-3Bs. See also a Willys 3A in the river (220K JPEG). 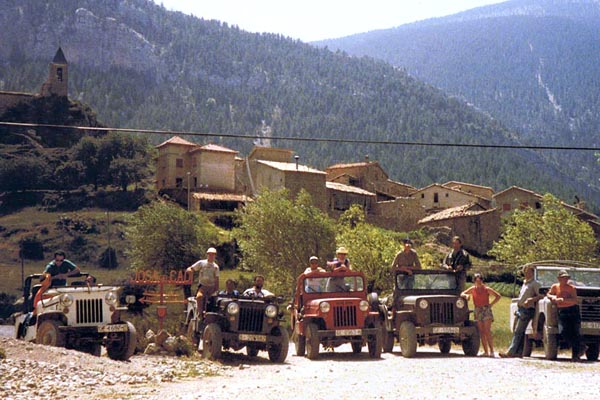 Here is Joan's photo of the group of VIASA and EBRO Jeeps posed in front of the little village of Josa de Cadí.

This is the kind of Camprodon Jeep heritage being celebrated in the 2018 Willys display. But I wonder what happened to that red EBRO CJ-3B -- it really brightens up a photo! 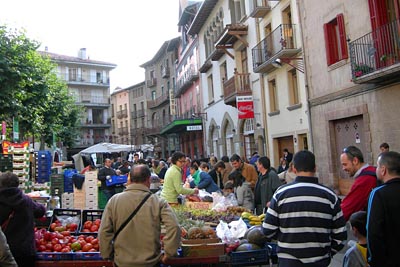 Farmers used to bring their Jeeps full of produce to the weekly market, in the same town square where the Willys display was held in December. Nowadays, vacationers come down from their summer houses in their Jeeps to buy at the market. 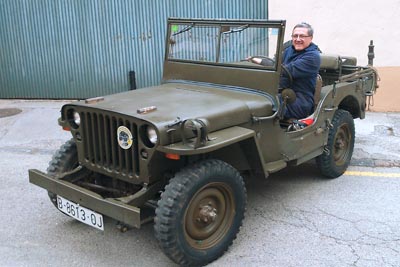 Joan Busquet can still be found looking after lots of those Jeeps at his Taller De Reparacio ("repair shop"). 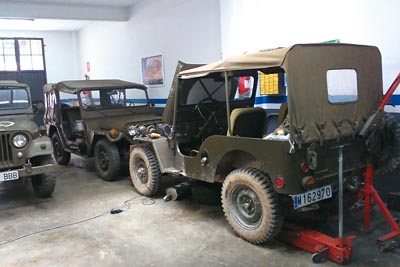 This is a typical scene in Busquet's shop. (And here's confirmation that we can add Spain to the list of European countries -- along with Belgium, Sweden and Switzerland -- who had military CJ-3As.) 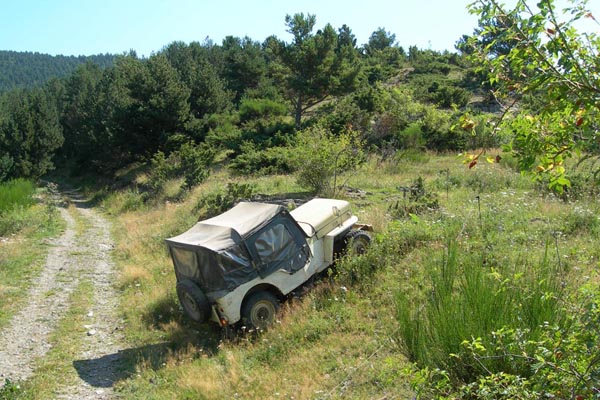 There are a few remaining working Jeeps in the valley, including this 1972 VIASA CJ-3B on the farm "Can Junens" where owner Esteve Guillamet uses it to keep track of his cows up on the mountain. 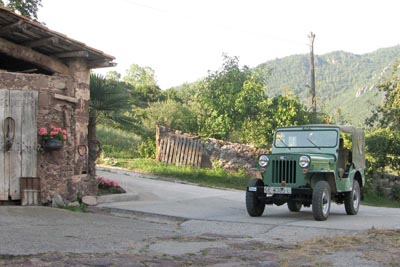 This 1980 EBRO Bravo has worked all its life on Coll del Puig farm outside Camprodon. It was bought new by Miquel Marcer's late father, and Miquel and his wife still take it in to the market in Camprodon on Sundays. 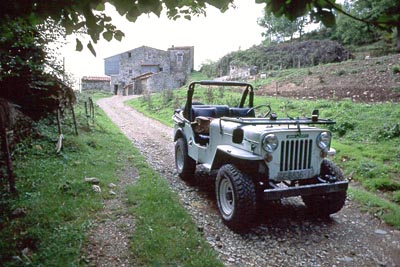 More typical of the newer type of Jeep owners is Manel Gené, who bought this deluxe Bravo S new in 1978, to drive up from Barcelona for summers in Camprodon. 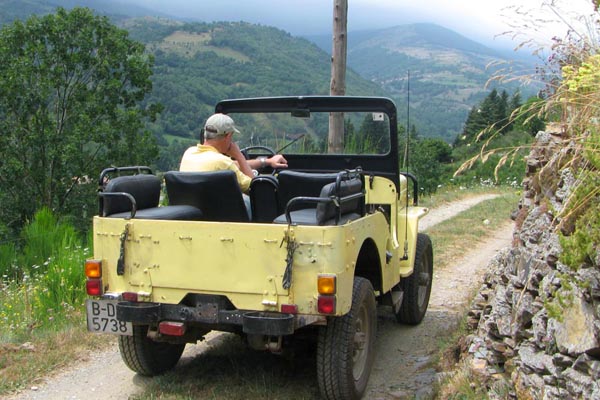 And a brightly colored Bravo S to finish this little tour of the Jeep Capital of Spain.

Amarillo Canario ("Canary Yellow") was always one of VIASA and EBRO's favorite colors, and this example belongs to Jorge Linati at Cami de la Rossa, above the village of Llanars.


If you're thinking of visiting the Valley of Camprodon, see Camprodon.cat for tourist information. -- Derek Redmond

See also Winter in Camprodon and my photos from CJ3B.info Visits Spain.