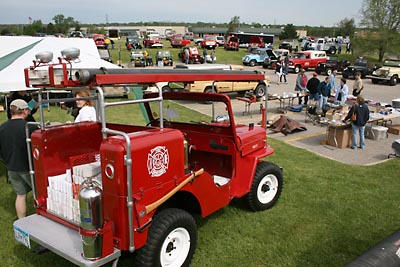 What better way to spend a Saturday, than to have a leisurely look at a CJ-3B Fire Engine recently brought back to life by Jim and Kristi Rorah of Northstar Willys, and then browse through a huge field full of old Jeeps, and tables loaded with Jeep parts for sale? That's what hundreds of people did at the Spring Midwest Willys Reunion in Rochester Hills, Michigan, on 18-19 May 2007. On the Friday afternoon the fire engine gave a pumping demonstration .

Here the 3B is seen overlooking the Northstar Willys parts display in the parking lot. Click the photo for a large copy (180K JPEG). Standing beside the 3B in the Spring Reunion Fire Brigade was Ron Hattner's Willys Valley Fire Truck. 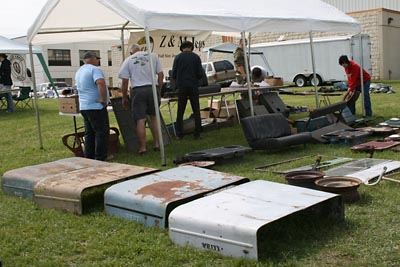 Also on hand was Zack Heisey of Z&M Jeeps from Maumee OH, who has expanded his FSJ business into a full range of Jeep parts. Anybody looking for a hood for a CJ-3B had a few to choose from at his tent, althought the grilles and windshields all seemed to be from earlier flatfenders.

When you were worn out from wandering around the vendor's tables and the Jeeps on display, you could sit down and watch tech demonstrations including axle rebuilding and engine rebuilding. 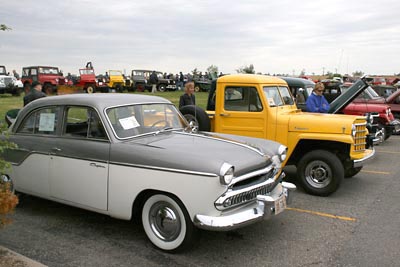 The featured vehicles for this year's event were the CJ-5 Universal Jeep and the Aero Willys autmobile. Lew Retzer gave a presentation after the Saturday night dinner on the history of the Aero Willys, one of the Siblings of the CJ-3B. Lew also brought his 1955 Aero Willys Custom to the Reunion, driving it most of the way from Illinois after his trailer tow rig broke down.

Behind the Aero in this photo is Janice Llewellyn's attention-grabbing 1952 pickup. 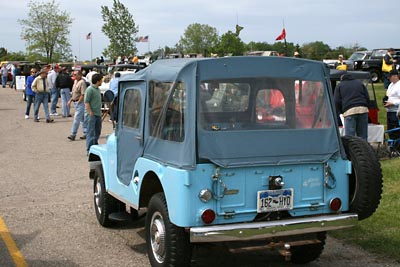 And of course the CJ-5 series (1955-83) was well represented at the show, including a couple of CJ-5A Tuxedo Park models. Thomas Hood's 1965 Tuxedo Park MkIV is in its original Sierra Blue paint, and it has a back-up light as well as chrome taillights, plate light and bumper. The Jeep was changed from column shift to floor shift by the original dealer, Kern Jeep in Denver. 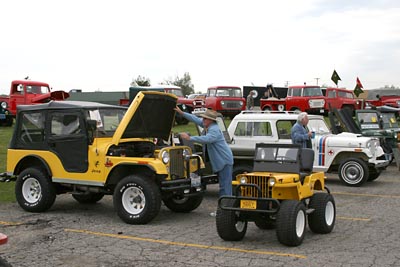 Eugene Martin had his CJ-5 in Killer Bee paint on display, as well as a matching gas-powered mini slat-grille, which he was happy to offer to every passing youngster for a test drive. (See Gas-Powered Mini Jeeps on CJ3B.info for sources.)

The 1971 Hurst Commando in the background of this photo belongs to Rod and Luana Schneider. 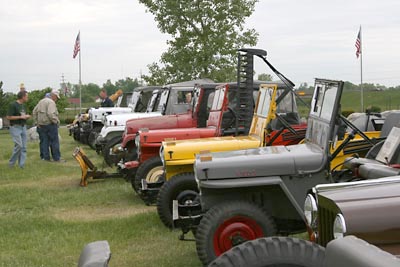 There were some tasty 2A's as usual. The red one with the K & K mower is Lonnie and Marilyn Deweese's 1948 CJ-2A (150K JPEG) from Kentucky. And Daron Wanberg brought his restoration of the frame from CJ-2 Number 14 (150K JPEG).

See also a photo of Bob Westerman of the CJ-3A Information Page checking out some of the 3A's in attendance (130K JPEG). 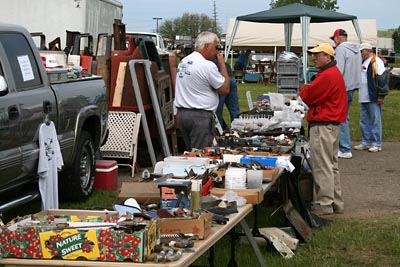 Lindsay Clark (right) chats with Harry Sheets of Mid West Willys. Harry has turned his part-time parts business in Crawfordsville IN into a full-time operation, and he had everything from antique Jeep toys to body panels on his tables and in his trailer. 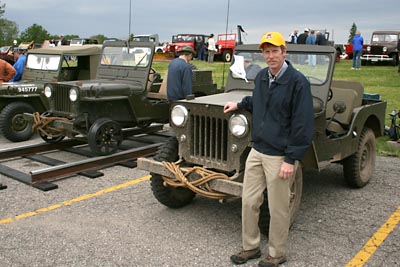 Mike Hurt was on hand with his early '54, which he's planning to restore as a military M606. The frame is from CJ3BOB5412281 but the current tub is a '61 on loan from Mike's brother Nelson, who is also the owner of the remarkable display in the background -- an M38 on rails. Mike is on the lookout for a tub with the early-style dash, and for all the military accessories including blackout lights, bumperettes and radio gear.

Another 3B owner scouring the parts tables at the Renion was Ian Fraser, who flew in from the east coast with a shopping list for his Air Canada Jeep which is currently in pieces in Nova Scotia. 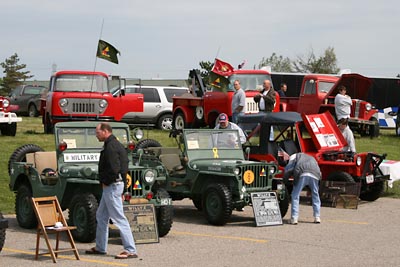 Further down the line of military Jeeps, another MC that got a lot of attention was John Wilson's 1952 M38 (160K JPEG) restored in Military Police livery, side-by-side with his Willys MB. See also a rear view photo (160K JPEG) with still more Jeeps in the background. 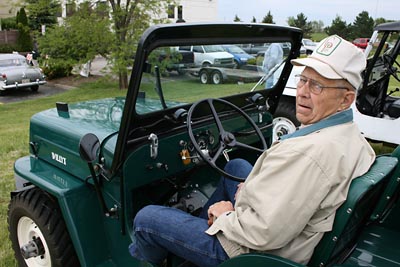 John Ittel of Green Prairie Turf in Ohio was behind the wheel of his green CJ-3B as seen on the June page of your 2007 Classic Jeep calendar -- one of several of the calendar Jeeps in attendance. (And Bill Norris was on hand taking photos that might make it into the 2008 calendar.) 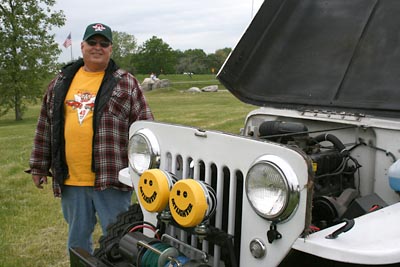 Parked next to John was Tom Hill who had a smile all weekend to match the Daylighters on the front of his '59. Tom's Jeep is a bit of a mystery because it has no WILLYS stampings on the hood or grille, which appear to be original. It carries serial number 5734857461 on the firewall, which makes it a late '59, but that would still be at least a year before Kaiser phased out the Willys name on the sheetmetal. Possibly an early experiment with the new parts, or a careful replacement job at some later date. 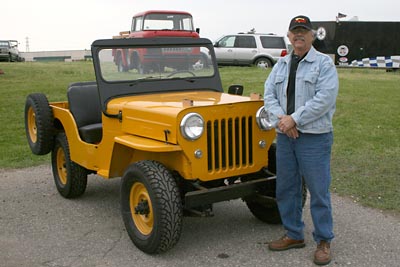 The biggest CJ-3B surprise of the weekend was the late arrival of Ray Hanson and his pristine '59. Ray lives in nearby Troy MI and happened to be passing by and noticed all the Jeeps. He went home and got the yellow 3B which he's owned for about a year. The body is in beautiful shape but has been repainted over the original green.

Rick Bielec and others were crawling all over Ray's Jeep checking out the details, and Ray was appreciative when Rick pointed out that the PTO rear shaft had been disconnected (130K JPEG) leaving the yoke free to potentially cause damage to the floor. Ray liked the suggestion of replacing the PTO with an overdrive. 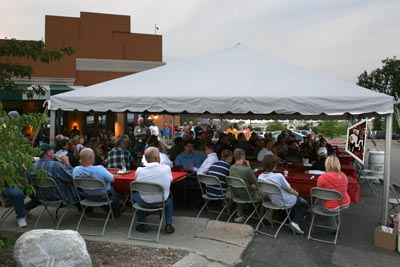 Back at the hotel, the Reunion wrapped up with the Saturday night banquet under a big tent. The weather cooperated, and this photo shows the crowd listening to Adam Sparks of the Early CJ-5 and Dauntless V6 Page as he presents his slideshow on the history of the biscuit fender.


Continue to photos of the Willys Parade to the Chrysler Museum.

Last updated 31 May 2007 by Derek Redmond redmond@cj3b.info
https://cj3b.info/Reunion2007.html
All content not credited and previously copyright, is copyright Derek Redmond