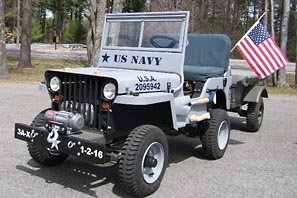 In 2007, a 1/2-scale slat-grille Willys MB powered by a 13hp OHV Honda engine was being built, and promoted at car shows, by East Coast Mini Classics of Sanford, Maine. Their stock is now sold out, and they are not currently producing the Willys. 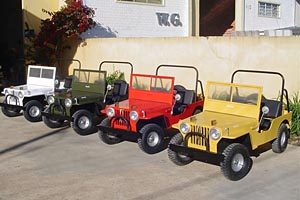 Junior Replicas were large, detailed 2/3-scale gas-powered CJ-2As made in Brazil but also distributed in North America and Europe as of 2006, and selling for about $9,000. There was also a military version. but as of early 2009 it's not clear whether they are still available. 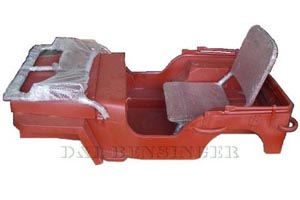 Bemak in the Philippines still makes a 59-inch long steel mini slat-grille MB body for which you supply your own running gear. See more details on a web page from D&L Bensinger, who list it for $950 in the U.S.

Mini Slat Grille Runs Like a Deere is Colin Peabody's 1/2-scale MB built with a Bemak body and a John Deere lawn tractor. 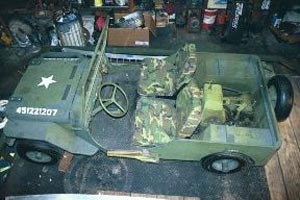 Golf-cart king Cushman offered a gas-powered jeep at one time (right). See also the rear-mount engine and gearing, the grille with the Cushman logo, and the interior (20K JPEG).

Tippmann Design also sells a $2200 kit designed for mounting on an ATV. 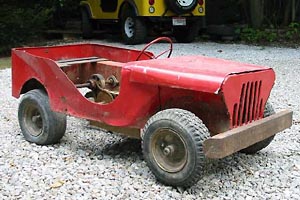 Andrew Petroski found and photographed this homemade mini-Jeep -- its origins are unknown. Anyone recognize it?

See Jeeps in Cuba on CJ3B.info, for a gas-powered mini-Jeep, not much larger than this one, carrying five people. And Mechanix Illustrated featured a wooden project in the Philippines in its September 1949 issue. 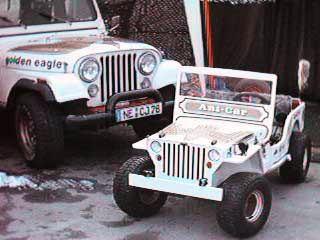 The "Ani-Car," made in Germany, was advertised on the web as a "A Children's Dream," but the website and perhaps this manufacturer have disappeared. 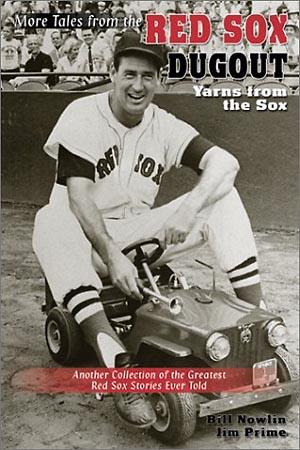 Some parade units of the Shriners Fraternity have driven miniature Jeeps. Baseball great Ted Williams is seen here clowning on a Shriners' Jeep Patrol vehicle, on the cover of a book by Bill Nowlin and Jim Prime.

Thanks to Fernando Sgrillo, Jarek Skonieczny and all the other contributors. -- Derek Redmond

See garden tractors that look like CJ-3Bs on the Green Thumb Jeeps page.