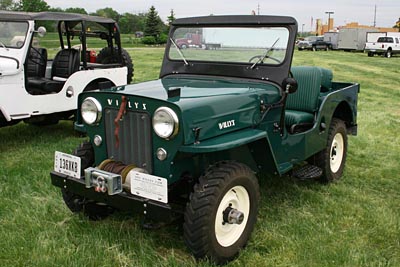 The late John Ittel and his wife Phyllis operated a farm known as Green Prairie Turf, Inc. (110K JPEG) in College Corner, Ohio. But once the rest of their family (110K JPEG) took over the work, John had the time to do a full restoration on several Willys Jeeps, including this CJ-3B.

On the front bumper of this '53 is a PTO winch, not as heavy but a lot more versatile than the flat iron weight Farm Jeeps often carry there to counterbalance the weight of implements attached to the rear. A close view of the front (160K JPEG) also shows the chaff screen over the grille, built from scratch by John from hardware cloth bound with a metal "U" channel covered with plastic. It's attached with compression springs.

The tires are designed for a skid loader, and John likes them because of their similarity to the ones used on some of the pre-production civilian Jeeps. 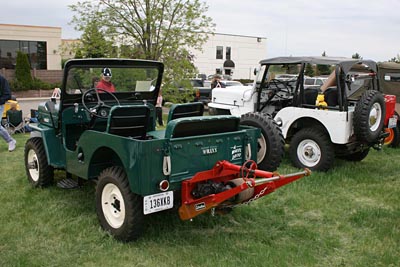 These photos were taken in early 2007 in Rochester Hills, Michigan, with Tom Hill's white '59 CJ-3B in the background. See also photos of both John and Tom, at the Spring Midwest Willys Reunion 2007.

The rear view of the '53 reveals the low-profile but powerful Stratton implement lift, which doesn't require removal of the tailgate and rear seat as the more common Monroe lift does, so the whole family (or at least a few of them) can still ride in comfort.

There's plenty of heavy equipment available at Green Prairie, so John's Jeeps probably won't be called into service on the farm, but they're all well-equipped with agricultural options. A '46 CJ-2A has a Monroe lift, and a '63 CJ-5 has a Newgren lift. 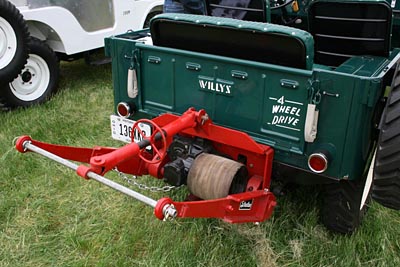 The PTO has a paper drum pulley in this photo. It's made from layers of paper held together by glue and metal rims, and was typically used on very early Jeeps -- cast steel pulleys were more common after 1946. The drum can power various belt-driven tools such as a corn sheller, buzz saw or feed grinder.

The implement lift can handle a wide variety of machinery such as John's plow or scoop. At the 2006 Spring Midwest Willys Reunion the lift and PTO were set up to drive his posthole digger (80K JPEG), also seen in the 2007 Classic Jeep Calendar. 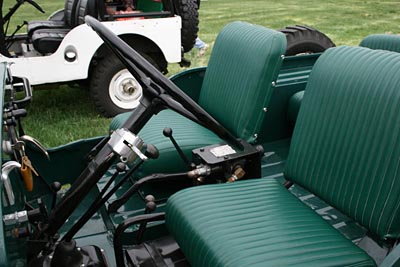 The seats were recovered by a local upholstery shop, in a fabric very close to the Woodstock Green paint. John said he didn't want them rolled and pleated, but the shop went ahead and did it anyway. It's not original, but it does look pretty sharp.

The control valve for the Stratton hydraulics sits between the front seats. It carries serial number SW2815. The hydraulic pump and reservoir are in the engine compartment. 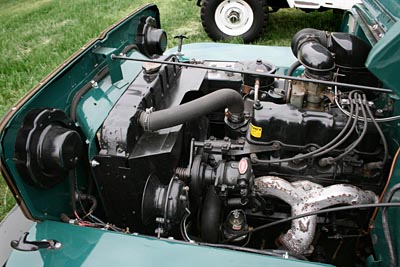 For operation of the power takeoff, engine speed can be controlled by a governor. The Pierce governor seen here mounted on the left side of the engine is from a welder with a Jeep motor. It's a constant speed governor, but John now has the correct variable speed governor ready to install.

See also a right side view (140K JPEG) of the very clean engine compartment, with the hydraulic reservoir visible down beside the starter. 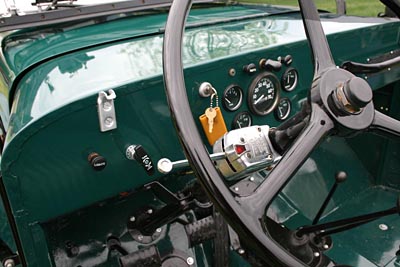 Controls on the dash include a Yankee Turnflex turn signal lever, and a locking cable control for the variable speed governor.

See also John's Jeeps in action at Universal Farming in Ohio, and a 2009 magazine article called "My Turf, My Jeeps" from Antique Power magazine.