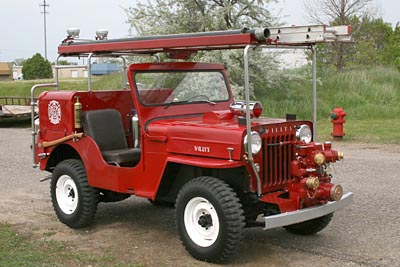 This 1954 Howe CJ-3B fire engine is one of about a thousand 3B's stamped with the unique and puzzling series of "OB" serial numbers in early 1954. On the dash it has Howe Willys serial number HJ 9257 (170K JPEG), which is a new addition to our Howe Fire Apparatus Jeep Production List.

Originally in service at a Western Electric plant in North Carolina, the Jeep had a couple of other owners and lost most of its fire equipment, before joining the collection of Jim and Kristi Rorah at Northstar Willys in Minnesota, where it was brought back to life.

As of 2010, the Jeep belongs to Mark Ciaglia in New York, who is continuing the restoration. 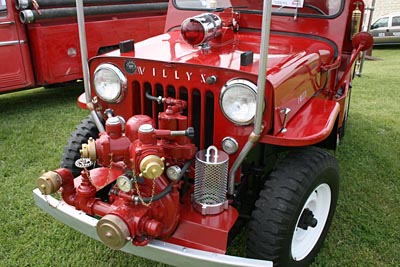 The Jeep has definitely come a long way since Jim Marski photographed it without the pump (80K JPEG) in 2001, posed with a late-1940's Al-Toy Fire Jeep on the hood.

After some time of looking for a new front pump, the Northstar folks stumbled onto a 500 GPM Barton American unit which had been removed from another Jeep still in service with a gas-powered pump. It's very similar to the original 400 GPM pump. The throttle and tachometer are mounted on either side of the WILLYS stamping on the grille; note also the hose passing through the grille (see below). 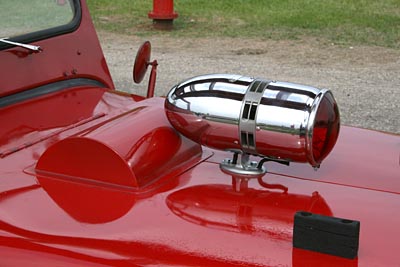 The siren, as well as the original paint, is in great shape. Like many fire Jeeps, especially industrial units, the mileage is very low.

Just behind the siren is the distinctive feature of Howe CJ-3Bs which has caused many people to scratch their heads. A cylindrical bulge is welded on, to cover a rectangular hole cut in the hood. Why isn't the 3B's high hood high enough? 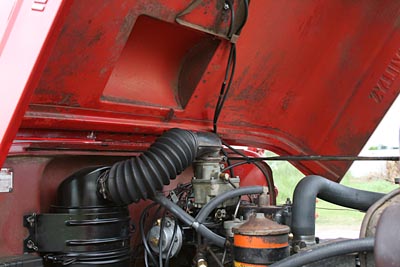 A look under the hood, and some explanation from Jim Rorah of his restoration of the pump, clarifies the purpose of the manifold mounted below the carburetor, which raises the carb high enough to require the cutout. Two hoses connect the manifold to the pump, and allow it to act as a governor, reducing engine speed when pump pressure gets too high. The installed 500 GPM pump doesn't actually require the governor because it has a clutch to disengage the pump when not in use.

Another distinctive fire Jeep feature is a special swivel hook (90K JPEG) on the bottom of the overhead rack, to hold the hood up (170K JPEG). 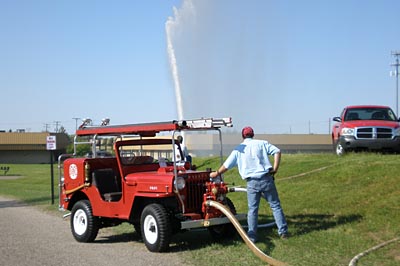 Jim Rorah demonstrated that the 500 GPM pump can put out plenty of pressure, when he fired up the Jeep and charged a 1.5-inch line during the 2007 Spring Midwest Willys Reunion in Rochester Hills MI. It would have passed the "water over the barn" test with no problem, and Jim managed to avoid a ticket for parking in a Fire Lane. Thanks to Bob Westerman for the photo. 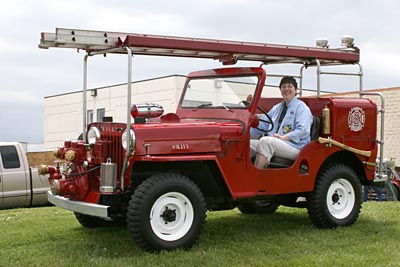 Kristi took the wheel of the Jeep for the Willys Parade from the 2007 Reunion hotel to the Chrysler Museum in nearby Auburn Hills. Jim was left behind to handle the busy Northstar table at the swap meet. 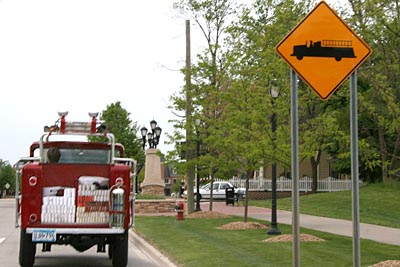 The Jeep got some appreciative glances as Kristi drove past one of the fire stations in Rochester Hills. At the Museum she parked beside the Valley Fire Truck (150K JPEG) belonging to Ron Hattner.

I took this photo from Ron's CJ-2A. See more photos of the Fire Jeep in the Willys Parade to the Chrysler Museum. 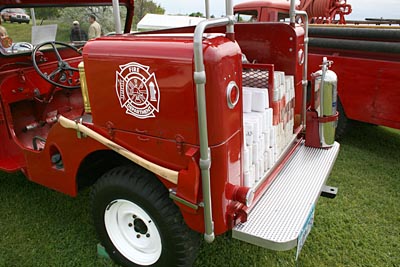 All the brackets are filled with the appropriate tools and extinguishers; the Jeep looks ready for service and in fact it is. The hose bed carries plenty of hose.

The single taillight has the extender bracket behind it to improve illumination of the license plate, but the plate has moved out to the back of the added rear step. And this step was fully capable of carrying firefighters -- see a 1950s Willys photo of the fire brigade at the Toledo factory (50K JPEG).