For information on current prices, see further down this page. 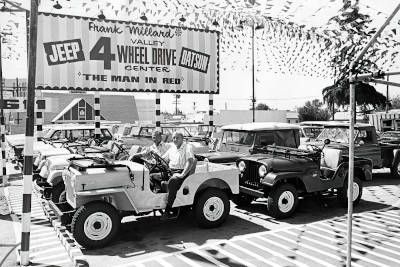 See also a 1953 Willys Prices postcard which offers a slightly lower price of $1345.


The CJ-3B was also sold in a farm version (priced at $1439 in 1953) and as a fire truck, or a stripped-down chassis for specialty vehicles.

Jim Allen's Illustrated Classic 4x4s Buyer's Guide (1997) lists these suggested prices for a CJ-3B of any year, in the following conditions:

A 1998 issue of the bimonthly Old Cars Price Guide -The Definitive Publication for Enthusiasts, Collectors, and Dealers (from Krause Publications, 1-800-258-0929) gives the following prices for 1955-62 CJ-3Bs, with 53-54 models and post-62 models going for slightly less:

A discussion on the CJ-3B Bulletin Board in 2014 suggested that since 2008, prices have slipped back towards Jim Allen's estimates above.

Oldjeep posted: "Just wanted to ask some advice about what a '63 should be worth. I just don't use it like I hoped I would -- life just seems to be getting in the way. When I finished the resto, for insurance reasons I had to get it appraised. The appraiser put a replacement value of $12,500 on it. I don't think that's a reasonable figure to sell it for, but wondered what you all collectively would think a reasonable price would be? Thanks all.

Dave Pete: "Sad place to be but understandable. Everyone has different directions to take and different interests.

"Oilleaker at The CJ2A Page says these old rigs are worth 12-15K. I don't know if he means a resto or just a great condition runner. His buddy in my town is looking for one that doesn't have to be done, just one that's running now and ready to go. That guy (the one looking) just offered less than the 6K a guy was asking for his in New Mexico. It seemed to be a Philippines tub. Deal fell through.

"Last year I was seriously considering selling mine (runs pretty good, not restored, some problems but overall was a garage find) for $5500. Ended up keeping it. Glad I did. I think I was a little low for my Jeep.

"Yours appraised at $12.5K. You'll probably get that (especially with an appraisal to show) but it all depends on the buyer. Find one who wants it? Great. Don't? not worth it."

Daryl: "It is all about condition, however there are starting to be more factors in play as time passes.

These old Jeeps are starting to fall the way of the Model A as to how big the market is for someone to want one. Many widows and adult children of the Model A owners are finding out that dad's pride and joy just isn't worth what it was back in the 80's and 90's. Simply put, the pool of buyers is shrinking rapidly for a stock CJ. Fewer people every day want to drive, maintain and house a vehicle with a top speed of 50, non-synchronized first gear and a very hard brake pedal. Most insurance appraisals run about twice the actual cash value of the vehicle.

Craigslist has opened a whole new world of selling as long as you have patience. Posting something on eBay will give you a real time estimate of what it is actually worth today, and as long as you post it with a reserve you won't get hurt.

Bob in NC: "The last 4 CJ-3Bs I sold I lost money on. 2 of the 4 CJ-3Bs I have now I would lose money if I sold them. They are nice to look at and putz around town with. for me, thats about it. I like driving on today's crazy roads with some air bags.

"For west coast original clean CJ-3Bs I pay anywhere between 5 and 6 thousand dollars. Max. Closer to NC and I pay a little less. Most people own them for a few years and realize they only drive a few miles a year and they are taking up room in the garage so they sell um."

Larry: "The guy who wants a restored 3B really bad and has unlimited funds to make such a purchase may very well give you that amount, but the only Jeeps I've seen in the past few years that bring that much money are restored military jeeps, mostly MB's, GPW's and M38's. The most I've seen a 3B go for, and I'm talking a very nicely restored 3B, is in the $7500 - $8000 range."

div4gold: "You might try eBay. I saw a nice looking resto CJ-3B go for almost $10k a while back."

Oilleaker: "Hello, Oilleaker here. Dave Pete mentioned me and a value I had talked about. What I actually said was that no matter how you go about a frame-up restoration, and doing all the work yourself, I end up at 12 - 15 grand. I'm picking a friend's CJ-3B up this coming week with him and he has been shopping CJ-3Bs for a while. 3B's are bringing more money than they used to, and the market is strong for them right now. Collectors must be filling their selection and the 3B is a rarer Jeep than say a '48 CJ-2A. It's also missing from my inventory although I owned one while in College. It was a great Jeep. I've seen them average what has been mentioned (5-6 grand) for a runner/driver.

"I was looking at one over in Wyoming with a PTO winch and title, top included, needed some bodywork and paint, tires etc. It sold on eBay for right at 4 grand. Surprised me. I don't see why a restored example couldn't bring what the owner has in it to someone that wants a nice one needing nothing. It's currently much harder to sell than buy anything. Disposable income for toys has tightened up. They say if you don't ask, you don't get!"

Thanks to John McClenathen and Chet Couvillon for the invoices from their grandfathers' Jeeps, Lime Street Carriage in Lancaster PA for the 1961 sales contract, Michael Velez for the 1954 Arkansas invoice, and Glenn Byron for the implement price list. -- Derek Redmond

Elsewhere on the web, see Older eBay Results at eWillys.