This rare postcard showing prices for the full range of 1953 Willys vehicles comes from Alden Jewell's substantial collection of automotive literature. Printed on a pre-stamped UPU postcard by a New York City car dealer, it was clearly intended for mailing rather than simply handing out to prospective customers. This may be why it includes special-purpose vehicles such as the personnel carrier, ambulance and fire engine. Note that the price for the CJ-3B Fire Engine is more than three times the base price of the Jeep. (And that base price of $1345 is a bit lower than the retail price of $1377 shown in other documents.) 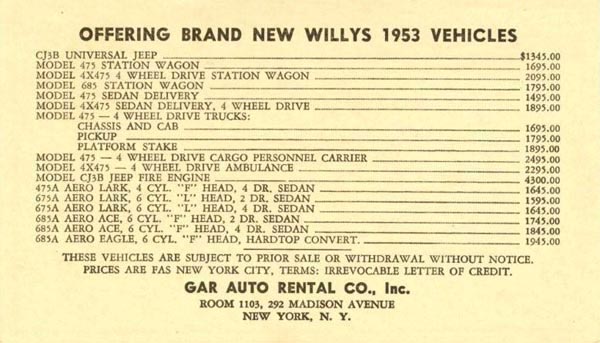 This copy of the postcard was never mailed, so I guess Gar Auto Rental lost their three cents postage. The three-cent stamp printed on it carries the image of President William McKinley who had been assassinated just over 50 years earlier, shortly after his re-election for a second term in office. McKinley was the last veteran of the Civil War to be elected President, and had been promoted for bravery more than once during his four years with the Ohio Volunteer Infantry. During the shocking Battle of Antietam, which killed 23,000 Americans and became a turning point in the war, he made 2nd Lieutenant for driving a mule team under Confederate fire to deliver rations. Ironically, the U.S. Army would go into the First World War 50 years later relying on similar forms of transportation, and soon realize the need for motorized cross-country vehicles which eventually resulted in the development of the jeep.

McKinley's first term as President was marked by the brief Spanish-American War in 1898, which resulted in U.S. control of Puerto Rico, Guam, the Philippines and Cuba. The U.S. also annexed Hawaii that year. 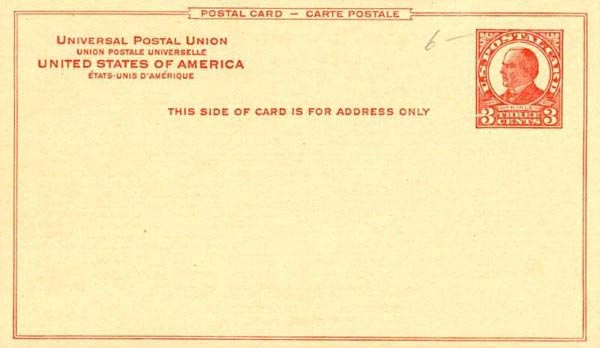 Thanks to Alden Jewell for scanning the postcard. -- Derek Redmond