Take one pretty beat-up Jeep, add hundreds of hours of work and quite a few dollars, and you might come up with the very nicely restored early-sixties CJ-3B seen in these photos. But in this case, the question was, who did the hundreds of hours of work? Some of these pictures arrived here at CJ3B.info in early September 2003, but unfortunately the message telling me who sent them was lost in the onslaught of junk e-mail. I posted a "Wanted: Dead or Alive" message on the CJ-3B Bulletin Board, and eventually Frank heard about it and sent the following story. Since then we've added more photos including the 1947 trailer which Frank restored in 2008 just before it appeared on our cover page, and the flag photo (180K JPEG) featured on our special cover for the Fourth of July, 2009. -- Derek Redmond 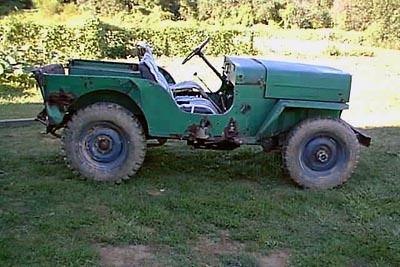 I traded a friend a windshield frame and a few bucks for a 1962 CJ-3B with a clear title. When I brought it home my wife shook her head and said what the heck is that thing. When it came time to restore it, the only real option was to buy a repro tub. I got the tub from D&L Bensinger. I wanted to make the Jeep look as authentic as possible, so I cut the dash out of the old tub and welded it in the new tub. I also welded the bow holders on the corners. I got these ideas from CJ3B.info.

When I received the repro body it was coated in a thick rough gray primer. I wasn't sure of the quality, so I stripped the tub back down to bare metal. It was a good thing because in the process I found a wad of chewing gum under the primer. 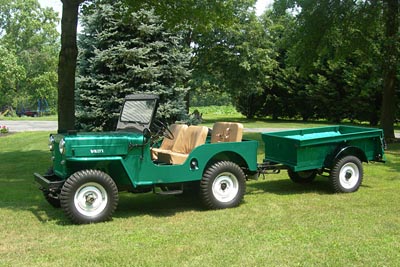 A friend painted the body the original Fountain Green poly (paint code 177.) I painted the rims and did the lettering, in a brighter white than the original off white. I thought it would fit the Jeep better. I also went with a personal preference with the seat covers; I had a local guy copy the old seat covers in a tan vinyl. I had a rear seat recovered in the same vinyl. I couldn't find a 3B rear seat so I'm using an early CJ-5 seat and it's bolted to the floor for safety reasons. This style seat was easier to bolt to the floor. I also used a new set of seat belts. 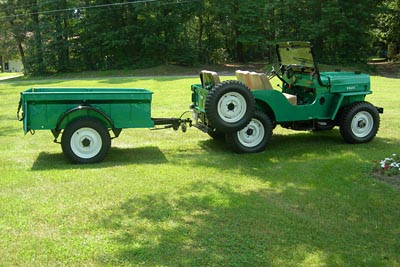 I sandblasted the frame, painted it with POR 15, epoxy paint and then a thin coat of Duplicolor truck bed liner. The bed liner goes on real nice and helps fill any pit marks from rust. It's not too shiny and it is real tough.

The trailer is a '47 BTC I painted to match in 2008. I took them to the PA Jeeps All Breeds Jeep Show at the York Fair grounds in July -- there were more flat fenders there than in previous years, and one other 3B. My 3B won the class and also won Best of Show in the stock class -- I was really surprised. How about that a 3B wins best of show -- who would have guessed the old ugly duckling could do so? Good for the 3Bs. 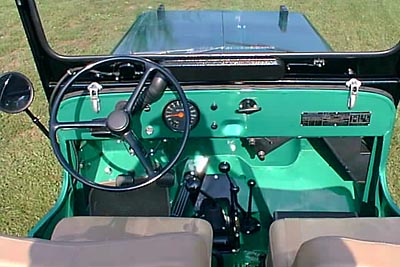 I purchased an overdrive from Herm the Overdrive Guy, and also a windshield defrost duct. Herm reproduces the defrost ducts and it is an exact copy of the original. Great guy to deal with and he has quality stuff.

When I removed the body I found that someone before me had upgraded the rear brakes to ten-inch. I decided to upgrade the front also to ten-inch. This may sound odd, but I used the backing plates and hubs from an old postal Jeep. It was cheap and a direct bolt-on. I replaced all the brake lines and everything that had to do with the brakes. Since I couldn't find a brake line kit for a 3B I used an early CJ-5 kit. The 5 was a little longer so I had to shorten one line. 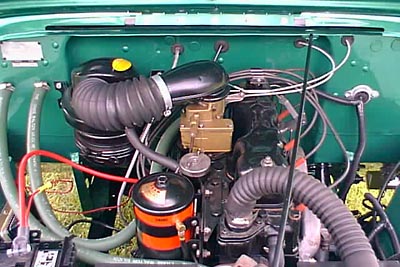 The motor, trans, and transfer case were all rebuilt and I replaced the leaf springs with a set I got from D&L Bensinger. I used a wiring harness from a 1959 CJ-5. It was in great shape because the Jeep had a hard top on for most of its life.

The plans for the Jeep now are just to drive and enjoy. 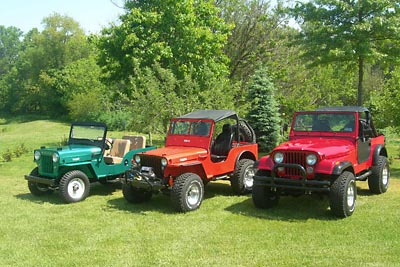 We've had some real nice days here in PA, so I decided to get some pictures of my Jeeps together -- the forties, sixties, and eighties. All three are real attention-getters... but I think the 3B could have the other two beat. 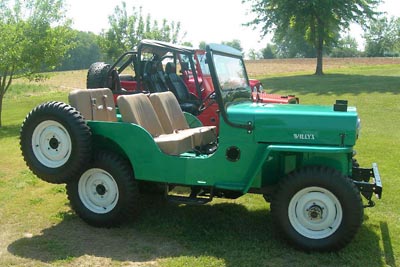 The tires are NDCC 700 x 16 which are more rounded than the NDT's. These tires I got through Daryl Bensinger and he's the one that suggested that I go with them. Daryl was very helpful and knowledgeable.

Most of my parts came from D&L Bensinger, Krage Motor Sports, and Walck's 4WD. The ideas and answered questions came from CJ3B.info. -- Frank

Thanks to Frank for the photos and story. -- Derek Redmond

See also some other CJ-3Bs at the 2005 All-Breeds Jeep Show in Pennsylvania.