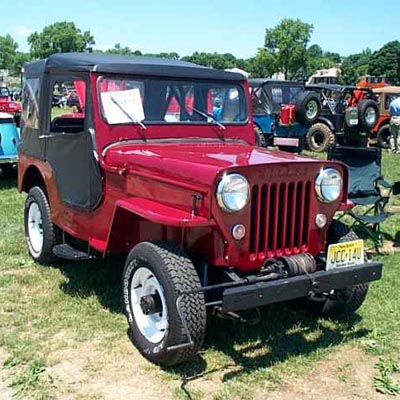 Possibly the largest all-Jeep gathering in the world, the annual All Breeds Jeep Show in Pennsylvania was held for the tenth time on July 23-24, 2005 in York, PA. As the name implies, it is open to every variety of Jeep, and there is usually a sprinkling of flatfenders among the more recent CJ's, YJ's, TJ's and Cherokees. The 3B from New Jersey seen on the left was photographed at the 2001 event, and CJ3B.info has also featured a 1960 CJ-3B at the 1999 Show.

But the fact of the matter is that there could be a much better representation from the Willys era, and in particular the CJ-3B. Willys owners seem to generally prefer all-Willys meets which are perhaps a little more sedate. But there are always a lot of spectators as well as a lot of young Jeep owners at this show, and it would be a really good opportunity to promote knowledge and appreciation of Jeep heritage among the younger crowd. 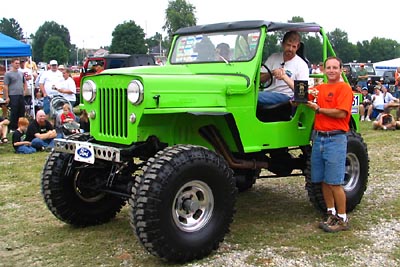 This modified 3B made it to the winner's circle at the 2004 show. Not sure what engine is in there -- apparently a Ford V8 -- but the stock high hood isn't high enough. Anybody know the owner's name?

There's plenty of room at All Breeds for custom-built vehicles like this, that shine on the rock-crawling course, as well as stock restorations that may just get shined up on the show field. 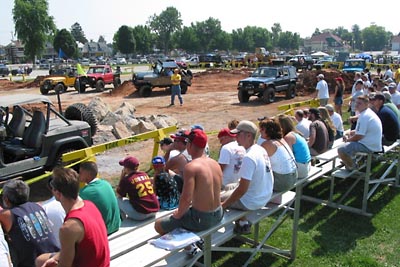 There's a dirt course as well as a rock course, and plenty of vendors' booths full of parts, memorabilia and aftermarket add-ons. This all helped to attract some 5,000 people to look at 400 Jeeps in 2004. Photo courtesy of Jeep parts dealer OK Auto, 4WD & Tire. 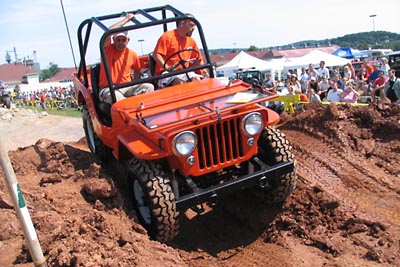 Organizing the show at the York fairgrounds is a big annual effort by the PA Jeeps club. 2005 Show Chairman Rick Bears agrees that he would like to see more early CJ's at the event. This CJ-2A pictured on the 2004 dirt course was a great example of a very capable performer which sacrificed very little of its original looks. 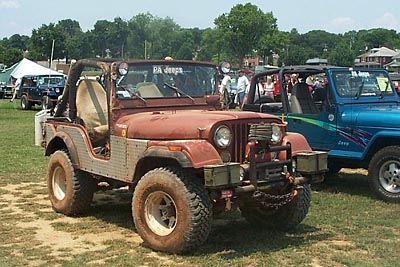 And not everybody is worried about shining their ride up. This '74 CJ-5 is usually at the show; it belongs to PA Jeeps member Robert Behler, and took home the Best Trail-Ready trophy in 2004 and 2005. (A little bit cleaner but also having lots of fun on the dirt course in 2005, is Lynn Klingel's '71 CJ-5, 30K JPEG.) 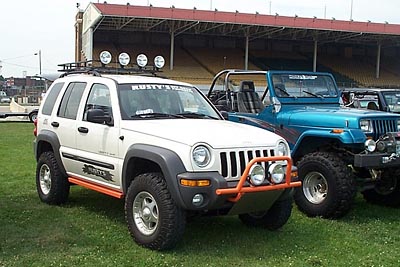 You'll find everything from the flatfender to the Liberty. (Now, there are some who might say that a Liberty needs those lights so you can spot all the rocks and avoid them. But as someone who recently switched to a Liberty as a daily driver, I have to say I think it's not a bad compromise for some people's needs.)

But let's make sure that every DaimlerChrysler Jeep owner at the next All Breeds Jeep Show has a chance to get a real good look at where that seven-slotted grille comes from. And let's show off the ideal combination of the Hurricane engine in the nimble flatfender frame, on the off-road courses. Registration forms are available at the PA Jeeps website.

Thanks to Rick Bear, Lynn Klingel and PA Jeeps, and to all the photographers who took the pictures on this page. -- Derek Redmond