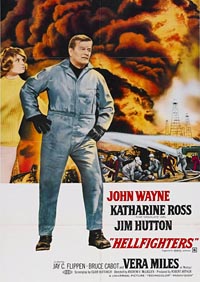 Hellfighters follows the adventures of oil-well firefighter Chance Buckman (played by John Wayne, and based loosely on Red Adair), as he faces difficult fires around the world, and difficult relationships with his daughter (Katharine Ross) and ex-wife (Vera Miles).

John Wayne has driven a few Jeeps onscreen, and not just in war movies. A couple of nice examples are an MB and a CJ-5 in Donovan's Reef, and there are a bunch of Jeeps in Hatari. But Hellfighters is the only big-screen appearance I know of by the Duke with that oddball of civilian Universal Jeeps, the CJ-3B.

The film features a brief but dramatic sequence (above) in which Chance and his assistant Greg, dressed in gas masks and red coveralls, jump into a red CJ-3B and roar away from an oil-well blaze to meet a helicopter (30K JPEG) carrying the nitro-glycerine they need to put it out. 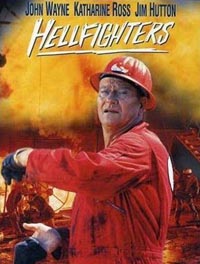 The film seems a bit dated -- it's like an episode of Dallas spiced up with some action scenes. Nevertheless, users of Internet Movie Database rated it 8.1 out of 10, and it remains popular on DVD (left).

The oil well fire effects were so spectacular that Popular Mechanics published an article on how they were done with a mixture of propane and diesel, fed through underground pipes.

In addition to the CJ-3B, the film includes a Dodge M43 ambulance (50K JPEG) and a few other Jeeps (below).

Chance (in the front passenger seat) and his fire-fighting crew arrive at a wellhead in Malaya, the morning after a good barroom brawl. The drive must have been fun for the bunch in the back of the 2A, since the Duke's first line in the scene is that they spent a good deal of time airborne on the local roads.

In Malaya we also see Wayne driving this CJ-3A with a spotlight. The film was actually shot on location in Texas and Wyoming, and directed by action-movie veteran Andrew V. McLaglen.

I'm guessing Wayne let stuntmen take over for this shot. Thanks to Jeff Peticolas for grabbing the frame.

Hellfighters also includes scenes set in Venezuela, where we see this M38A1. The army is involved because guerrilla fighters are threatening the oil wells.

Thanks to Dan Bever for spotting the CJ-3B in this film. Thanks to the Internet Movie Cars Database for frame enlargements. -- Derek Redmond

See also a Hellfighters Jeep toy as part of a New Idea for Matchbox: "The CJ3B Page Collection".

Return to The CJ-3B in the Movies or to Fire Service Jeeps on CJ3B.info.