Hatari! is one of the best known examples of Jeeps being featured on the big screen, with CJ-6s and Forward Control trucks helping John Wayne capture African wild animals for zoos. (See a plot synopsis at IMDB.) Producer/director Howard Hawks' 1962 adventure film was shot in Tanganyika (now Tanzania), as well as back in Hollywood. 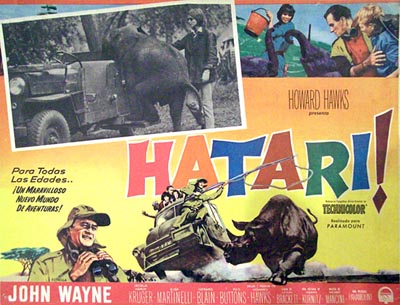 For years I've had a lobby card from the Mexican release of Hatari, with a small black & white photo which appears to show a CJ-3B with a baby elephant climbing into the back. Only one problem -- the scene did not appear in the film.

Even in a closer view (130K JPEG) it's hard to see details of the Jeep, except that it seems to have a large side step, probably added specifically for the elephant. 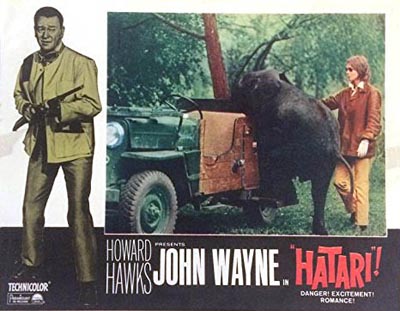 Then I also discovered this hand-colored version of the photo in a set of American lobby cards (210K JPEG). Apparently publicists couldn't resist using this picture of Elsa Martinelli helping the elephant calf into the back seat of a Jeep, even though the scene itself wasn't in the movie. 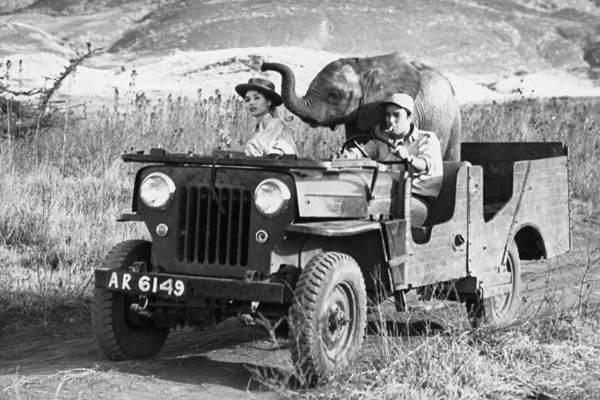 Federico Cavedo recently found some production stills taken on location, including two photos of actors Elsa Martinelli and Gérard Blain in the CJ-3B with Timbo the orphan elephant. This suggests that the baby-in-the-back-seat sequence was actually shot, but was "left on the cutting room floor." 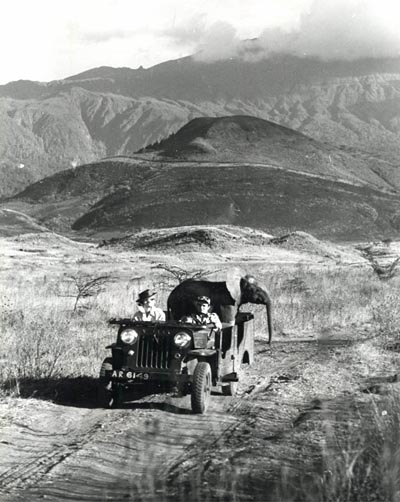 These stills show a little more of the CJ-3B. It looks like the body has been lengthened and perhaps reinforced. A back seat door opening has been added, with a heavy-duty folding step. It appears a lot of work went into making it possible to take the little pachyderm for a drive, so it was probably a scripted scene rather than just a spur-of-the-moment experiment.

It's unfortunate Howard Hawks decided to leave the CJ-3B out of the lighthearted baby elephant sub-plot, and it's surprising that other photos of the scene haven't surfaced -- it must have been a pretty attractive photo op. Then again, the set of Hatari had no shortage of good photo ops. Hawks did put Timbo in the back seat again later in the film, in a different Jeep (see further down this page.)

The scenery here suggests the photo was taken in Arusha National Park, which is near Mt. Kilimanjaro. The wildlife chases would have been shot largely in Serengeti National Park, 120 miles (200km) to the west.

In the baby elephant sequences, Elsa Martinelli's character "Dallas", an Italian photographer, rescued and bonded with three of the little calves. They became one of the best-known features of the film, thanks in part to Henry Mancini's tune Baby Elephant Walk from the soundtrack. Mancini's recording was not released as a single, but it did win him a Grammy award for "Best Instrumental Arrangement" in 1962, and the song was a hit for various artists around the world. Take a listen: 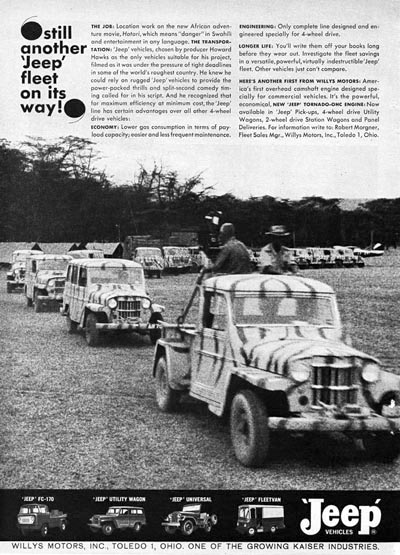 Meanwhile, Willys Motors got a lot of promotional mileage from the Jeeps which did appear in Hatari, and from a fleet of vehicles used by the crew behind the scenes.

This advertisement claims that Jeeps were "chosen by producer Howard Hawks as the only vehicles suitable for his project, filmed as it was under the pressure of tight deadlines in some of the world's roughest country. He knew he could rely on rugged 'Jeep' vehicles to provide the power-packed thrills and split-second comedy timing called for in his script."

It seems likely the custom-painted vehicles were provided by Willys in exchange for a marketing tie-in with the movie. Perhaps Hawks approached Willys after deciding to feature a couple of CJ-6s in the film.

The text of this ad, as well as the inclusion of the 2WD Fleetvan delivery truck at the bottom, suggests the ad was targeted at purchasers of commercial fleet vehicles. 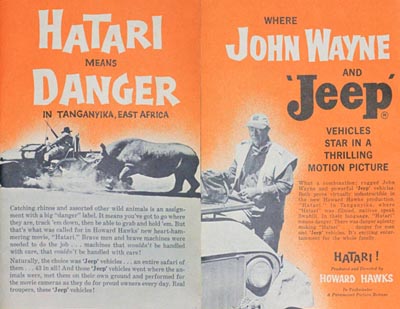 Willys also produced an elaborate 8-page brochure aimed at a more general audience, which says 43 Jeeps were used on the film. Some of the text:

The claim that "Hatari" means "Danger" in Swahili, found in advertising by Paramount Pictures as well as Willys, is correct according to Wiktionary. 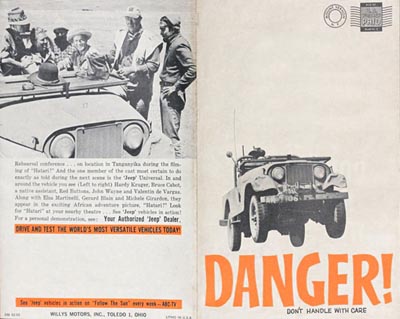 The outside pages of this folding mailer, focus on the battered CJ-6 which stars as the "herding car" in the film, and is attacked by a rhinoceros in the opening scene. The inside of the brochure (80K JPEG) shows photos of the production vehicles with their custom zebra stripes, but says the "camouflage paint job is not one of the many two-tone combinations normally available." 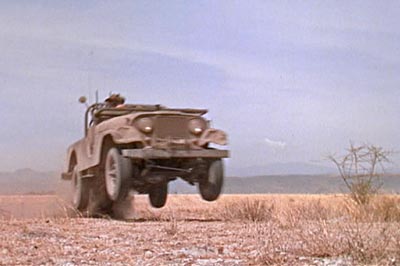 The photo of the airborne CJ-6 was taken from this shot in the movie, one of many shots showing the long-wheelbase workhorse being driven hard across the rough terrain of the Serengeti as it herds animals in preparation for catching them. The driver is actor Hardy Krüger, who plays "Kurt", a retired German race car driver. 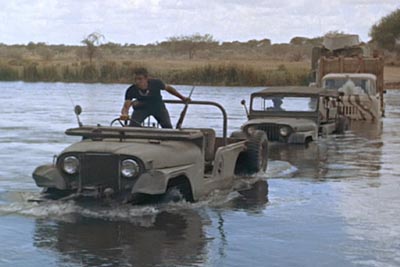 The herding Jeep, and another CJ-6 with a canvas roof for more comfortable transportation, are seen throughout the film. They are both right-hand-drive, suggesting they were sourced in Tanganyika, rather than brought from the States. According to the IMDB, Hardy Krüger wrote in his autobiography that the film crew rented every vehicle available in the country.

A couple of the zebra-striped FC-170 (50K JPEG) stakebed trucks from the fleet provided by Willys, became prop vehicles in the film, carrying animal crates. (Elsewhere on the web, see more Forward Control Jeeps in Hatari at The FC Connection.) 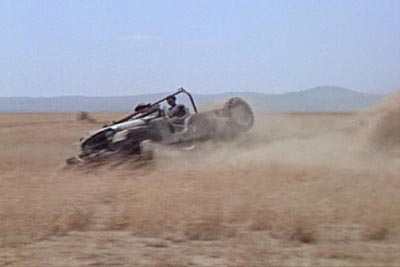 When the herding car blows a tire, there is a shockingly sudden and violent rollover which will have you commenting on the value of a rollbar, and wondering how Kurt and the Frenchman "Chips" would be able to walk away with minor injuries. (Jeep Corporation may have later regretted sponsoring this famous rollover.)

In this still frame of the stunt, you can see that another Jeep (no dents in the front fenders) has been substituted, and Chips in his black T-shirt is a dummy. 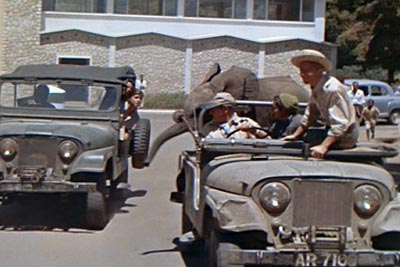 The CJ-6 is replaced for the final rhino hunt with a war surplus Dodge WC-52 (60K JPEG) which they refer to as a Power Wagon.

But the Jeep is miraculously back in action with no new dents, when everybody goes into the city of Arusha, searching for Dallas. The little elephant Timbo does get a Jeep ride here; loaded via the tailgate and brought along to help find Dallas. The three baby elephants chase her through town and converge on her in a very funny sequence which mirrors the animal hunting scenes. 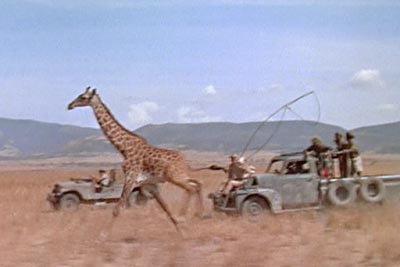 The most prominent vehicle in Hatari is in fact not a Jeep. The "catching car" is a beat-up and modified late-1940's or early-50's Chevy pickup. Its driver is former Brooklyn cabbie "Pockets" (played by Red Buttons,) with John Wayne as "Sean Mercer" riding in the "catching seat" (50K JPEG) on the front fender.

According to a speedometer visible in one shot, the vehicles were travelling at 30 mph (50 km/hr) cross-country. 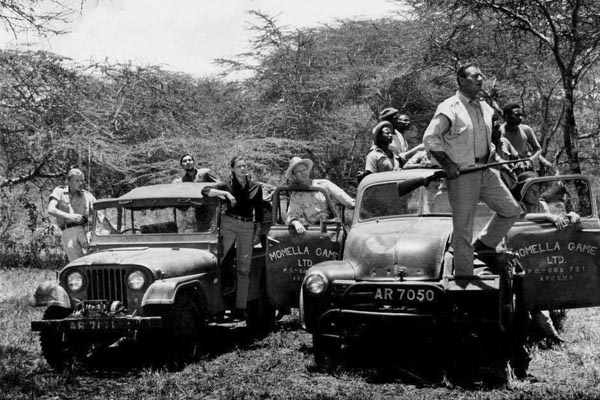 Willys' claim that only rugged Jeeps were suitable for the job, is weakened somewhat by the fact that they are working alongside the ancient truck. The Chevrolet badge has fallen or been taken off the front of the hood; it's interesting to speculate whether removing the Chevy logo was a condition of Willys' sponsorship. 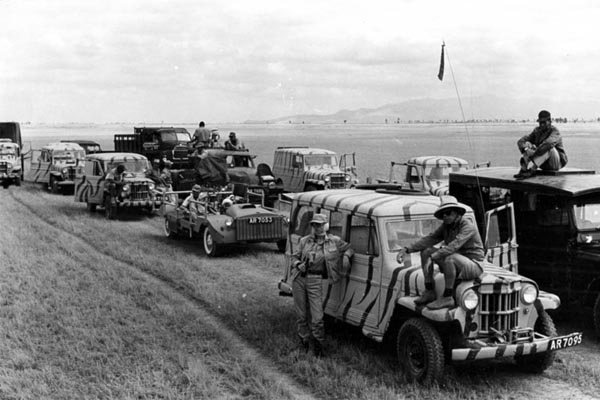 This production photo corroborates Willys' advertising claims, that a large number of Jeeps were actually involved in shooting the film.

The low, wide vehicle in the middle is a custom Hollywood camera car (110K JPEG) used to get many of the exciting moving shots (160K JPEG) in the animal chase sequences. Adam Pinnock of "Film Cars Australia" told CJ3B.info in 2017 that this was one of three similar camera cars originally based on a 1961 Chev C10 panel van chassis. One survives in their collection in Sydney, with a windscreen added (100K JPEG). 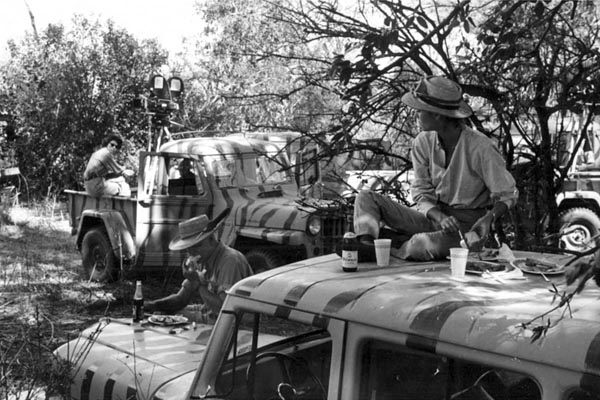 In this photo Elsa Martinelli enjoys lunch and a cold one, on the roof of a Utility Wagon.

Cameras mounted on tripods in the back of Jeep pickups, as seen here and in the Jeep fleet ad, would have been used for static shots, not while moving. Cinematographer Russell Harlan received Oscar nominations for his work on both Hatari and To Kill a Mockingbird at the 1963 Academy Awards. 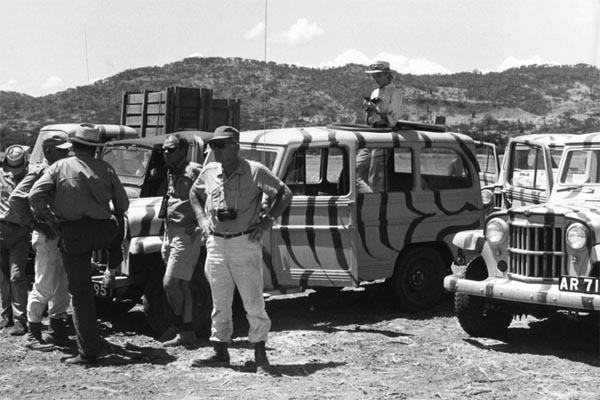 Here Elsa Martinelli makes use of one of the observation hatches built into the roof on some of the wagons.

The need for the huge team of people and custom vehicles for this production, is easily understood when you see the scale and the realism of the action sequences, which don't rely on special effects, stunt performers or trained animals. 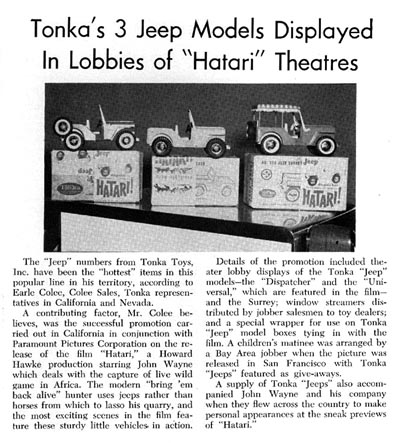 Tonka Toys in Minnesota had just added Jeeps to their line of toy vehicles in 1962, and they also spotted the promotional value of a tie-in with Hatari. According to this article in the toy industry publication Playthings in August 1962, Tonka Jeeps were displayed in theater lobbies in California and at preview screenings of the film across the country.

For details on the 1962 Tonka models, see Dispatcher Details: How to Date Your Tonka Flat-Fender on CJ3B.info. 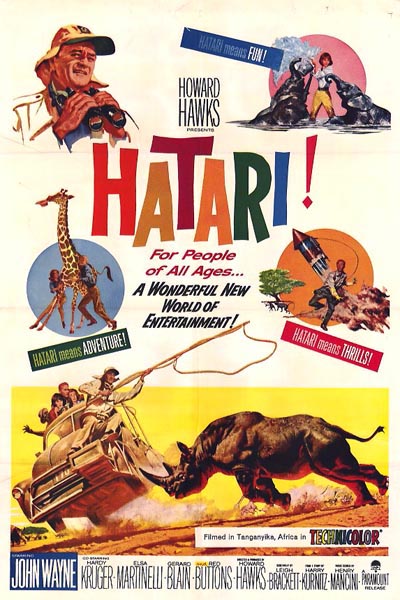 A conversation with the kids might be in order after a family screening of the film today. Aside from the dangerous treatment of real wild animals, which would never be allowed now in a Hollywood movie, the film is obviously dated by its sexism, racism, and constant smoking. (Willys was not the only corporate sponsor of the movie; IMDB reports the tobacco lobby also invested.)

But it is essentially a family story about a group of people who get along well together and are respectful of nature. The scenes of John Wayne chasing giraffes, rhinos and other animals at high speed across the beautiful national parks of Tanganyika are absolutely unique, based on real hunting techniques, and well worth seeing.

Maybe someday we'll also get to see the missing sequence of the baby elephant in the CJ-3B.


Thanks to Federico Cavedo for finding the production stills from photovintagefrance, and Alden Jewell for scanning the Jeep fleet ad. -- Derek Redmond