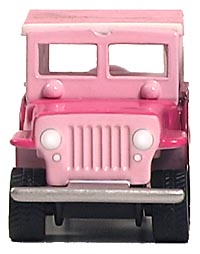 I've never had much success with my suggestions to Matchbox for new variations of their diecast Jeep toys. But Matchbox did go to a lot of trouble to upgrade their old flatfender casting, for the 1960 Surrey Gala (left) included in their 2001 Elvis Presley Graceland Collection.

The facelift made it look more than ever like a CJ-3B, so of course I wanted to make sure they realize there are lots of opportunities for re-issuing the new casting. An obvious possibility would be a "CJ3B Page Collection", made up of some of the classic high-hood Universal Jeeps found on this website. I originally proposed six examples in 2001, and in 2009 I added three more of my favorites to the collection:

The top row, added in 2009, includes three interesting historic Jeeps that have been featured on the website.

Some CJ-3B fans will recognize the significance of the next three examples -- Jeeps that have done a lot to raise awareness of the CJ-3B. Photos of my green Jeep have been kicking around the web since 1994, and appeared in books and magazines when it was hard to find information on high-hood Jeeps. Joe Caprio's Navy Jeep was the first museum-quality 3B restoration we discovered, when it took second-place at the 1998 MVPA convention. And later, Adam Charnok's like-new '63 became a valuable reference vehicle for reliable information on original details.

The final three examples would have even wider appeal. The Hellfighters Jeep would have the connection with the Duke, and would also be popular because it looks like many of the off-road beaters that are out there on the trails. The Jeep from the Patton movie is a real curiosity, and the Eisenhower parade Jeep is a genuine lost historical artifact with patriotic significance.

If Matchbox goes for the idea, we might have to request some narrower tires. And about those blobs on the windshield.... -- Derek Redmond

Return to the Toy Jeeps Pages for more Matchbox Jeeps.