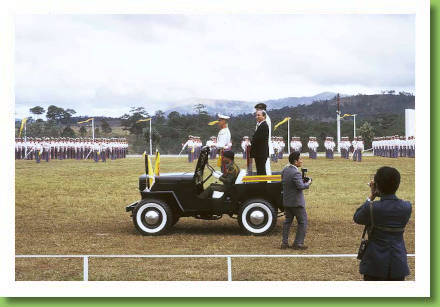 President Nguyen Van Thieu of South Vietnam inspects officer cadets in this 1974 photo from the William E. LeGro Collection in The Vietnam Archive at Texas Tech University. The Jeep carrying the President is similar to one seen in an inspection by a 3-star General in CJ-3B on Parade, but with white seat covers to match the whitewall tires, white gloves on the driver, and white dress uniforms. See more on President Thiệu's CJ-3B on CJ3B.info.

Thieu was elected President in 1967, and held the position until he left the country a few days before its surrender to the North Vietnamese in 1975. After fleeing to Taiwan, he settled in the UK, and later moved to Massachusetts where he died in 2001. 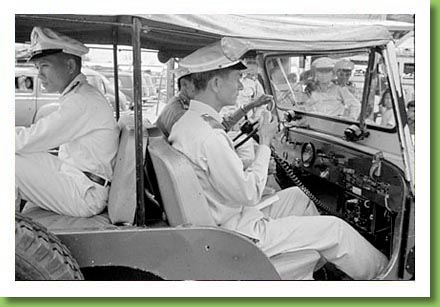 White dress uniforms were again the order of the day when this photograph was taken, date and location unknown. The Jeep carrying these officers also appears to be a late-model CJ-3B without the swing-out ventilating windshield. With no heater needed, there's plenty of room for a radio, and the most unusual feature is the rear-facing back seat. 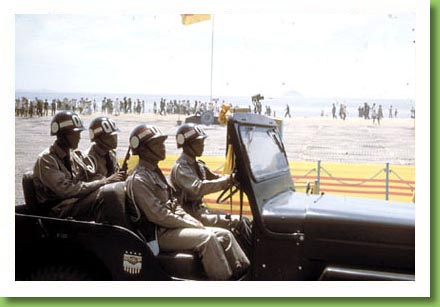 These ARVN (Army of the Republic of Vietnam) MP's were photographed at another spit-and-polish event, at Nha Trang in 1965/66, in what appears to be a more typical Willys/Kaiser M606 with the top-mounted wipers and ventilating windshield. The label on the side indicates a vehicle provided by the American MDAP (Mutual Defense Assistance Program). Also on the side is the wooden vibration dampener for the spare tire, but the spare itself appears to have been removed. 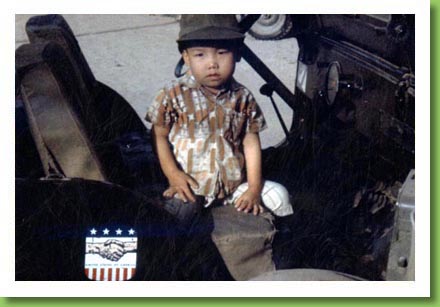 This photo of a little boy in the James M. Kraft Collection at The Vietnam Archive provides a closer look at the MDAP sticker (130K PNG) designed by Eleanor Gault, an employee in the Marking and Labeling Office of the Mutual Security Agency, in 1953 (Wikimedia).

The dashboard with post-1961 parking brake also carries a government data plate in the middle and Kaiser government warranty sticker on the driver's side. (See a 1966 M606 in Argentina for details on the warranty sticker and how to order a reproduction.) 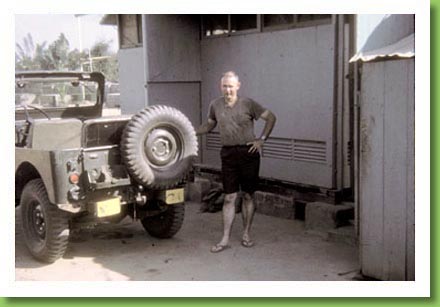 Luis Mariano Paz, who tracked down many of these photos, was pleased to find this one which clearly shows an M606 with tailgate-mounted spare, similar to some of the Jeeps sent to Argentina. The caption on this undated picture in the Jackie Wright Collection at The Vietnam Archive simply reads, "Back of the house where the jeep gets parked." 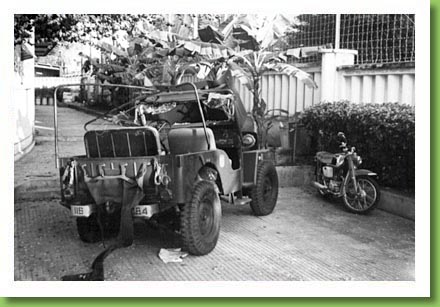 The M606 in this mystery photo has no spare tire. The side mount has been removed (although the vibration dampener is still in place) but there is also no tailgate mount. The Jeep obviously has much worse problems than the flat tire; it's not clear whether the damage to the hood, windshield and roof was caused by an accident or combat. 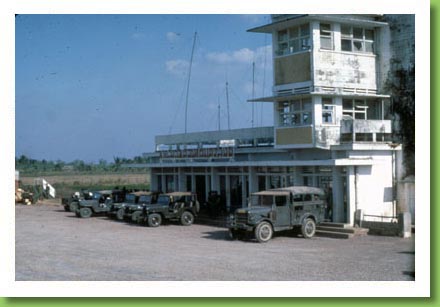 Here's one of those photos which shows how common the high hood Jeep was at U.S. and ARVN facilities during the Vietnam war. From the Ranch Hand Association Vietnam Collection at The Vietnam Archive, it shows "Operations at Rach Gia, March 1968." 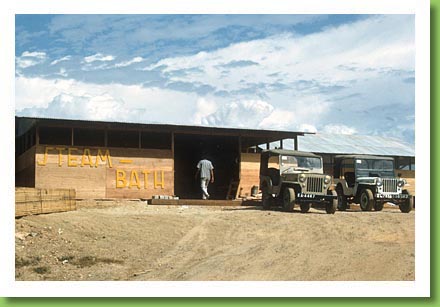 And here's one taken by Warren Newbury showing some local color. Warren says, "It was in 1969 but I don't remember where I was. If I had to guess, I'd say Camp Eagle, Hue - Phu Bai, I Corps."

Parked outside the steam bath house are a Willys CJ-3A and a civilian Mitsubishi CJ3B-J3, clearly identifiable in the large copy of the photo (120K JPEG) by the vent below the windshield, and the Mitsubishi logo stamped alongside "Willys" on the grille.

Thanks to Luis Mariano Paz, and to Warren Newbury and the other photographers. -- Derek Redmond