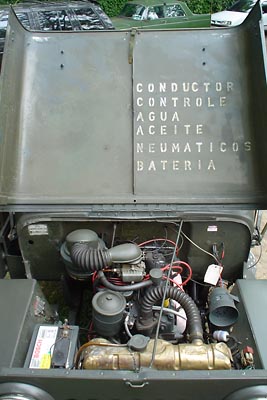 Delivered to: Republic of Argentina via the United States Military Assistance Program.

This photo shows a maintenance checklist in Spanish on the underside of the hood. See also a closeup of the VIN plate (90K JPEG) on the firewall. 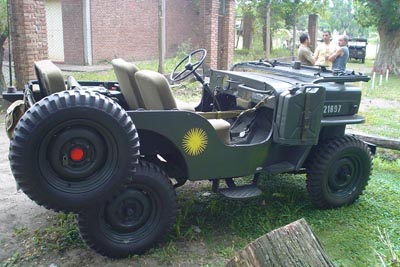 Unlike some of the Argentine Army Jeeps which had the spare tire moved to the tailgate, this M606 has the original Willys side-mounted spare. When Osvaldo Bosch purchased it, the Jeep actually carried one on each side. Probably the previous owner thought better safe than sorry, since he apparently used the Jeep to hunt jabalies (wild boar) in La Pampa. 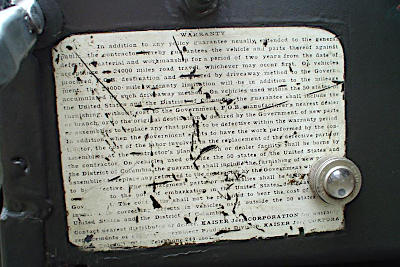 In addition to the brass U.S. government vehicle data plate, the dashboard carries the Kaiser government warranty sticker on the driver's side, describing the extended warranty (two years or 24,000 miles) offered to the U.S. or other governments.

Note: a reproduction of the Kaiser warranty sticker (100K JPEG) is available from Joe Evans for US$5.00 (plus postage for overseas customers) at evansjoe12@yahoo.com. 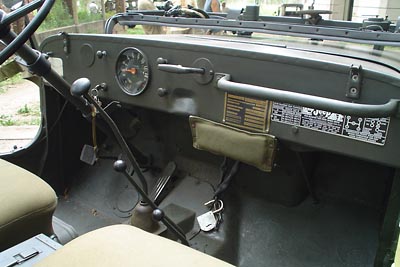 Osvaldo says, "The desire to have a military Jeep began when I visited the Asociacion Argentina de Coleccionistas de Vehiculos Militares (AACVM) in Buenos Aires. I left this place and began the long task of finding the right Jeep."

"It was 2001, and I spent all my Saturdays travelling through places where Jeeps were listed for sale. I must have seen M38, M38A1, M606, CJ-2A, and M151, and many of the prices were high. I was about to give up when I saw the listing of the Jeep of my dreams, a Kaiser M606 from the Argentine Army which now delivered paper boxes for the printing business of its owner. After speaking to him and driving it three times, I verified that the Jeep was in good mechanical condition and had almost all its military elements." 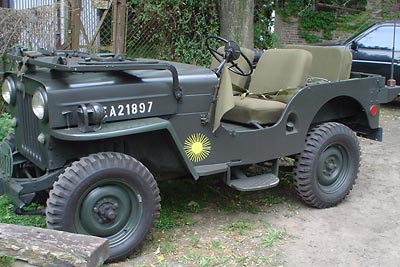 All the accessories such as lights, jerry can racks, radio antenna base and spare tire bracket were removed, sanded and painted. The wheel rims were also sanded. Osvaldo was unable to find military 700-16 tires, but Pirelli had MT-06 600-16 tires available. After consulting with members of the AACVM he decided to buy the Pirellis, which looked good and were inexpensive.

Restorer Roberto Cignalli spent a long time sanding and repainting the body. Osvaldo found a lot of the olive green canvas used by the Argentine Army, which was used to recover the roof framework and seats. 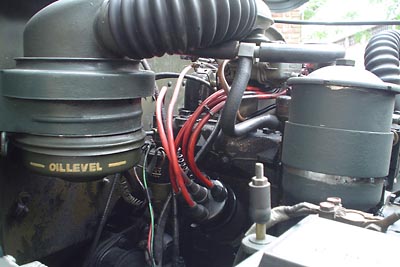 The F-head engine number is 4J449115. The engine and drive train were carefully checked and refinished, but none of the elements were rebuilt since they didn't exhibit significant wear. A new head gasket and a rebuild of the steering box were a couple of small repairs necessary. 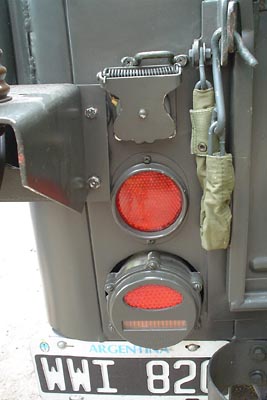 The blackout lights and trailer electrical connector are original details of the M606. The MP 50 Radio antenna was added by the Argentine Army.

Osvaldo writes a nice tribute to the vehicle and to everyone who helped him restore it: "This Jeep has changed my life. I feel proud of possess it, I love to drive it, but the best thing is the people that I know in the AACVM. They are true friends who advised me and helped me carry out this small work of art of strength and Spartan simplicity that is a Jeep! Thanks to all!"

Thanks to Osvaldo Bosch, and to Luis Mariano Paz (who also has a 1966 M606 himself) for sending the photos. -- Derek Redmond

Last updated 10 May 2020 by Derek Redmond redmond@cj3b.info
https://cj3b.info/Military/BoschM606.html
All content not credited and previously copyright, is copyright Derek Redmond