On 20 July 1974, Turkish forces moved across the Mediterranean Sea toward the island of Cyprus (see a map, 220K JPEG). Some 3,000 troops and a dozen tanks from the Turkish Army's 39th Division (see Wikipedia) were the first wave of Turkey's response to a military coup by Greek Cypriot forces. 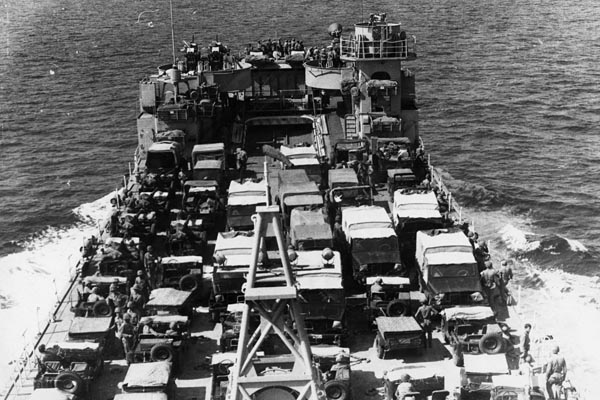 The disputed island had been patrolled by United Nations peacekeepers since violence had broken out between Greeks and Turks on the island in 1964.

Jeeps used by the U.N. peacekeepers would soon be painted white to distinguish them from the invading Turkish Jeeps. (See UN Forces in Cyprus on CJ3B.info.) 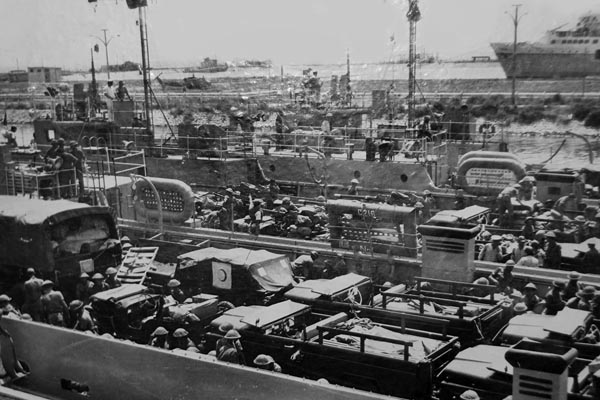 Seen here loading onto the flotilla of landing ships at the port of Mepris in southern Turkey, the force included Jeeps with and without recoilless rifles mounted, long-wheelbase ambulance Jeeps marked with the Red Crescent, and Jeep Gladiator troop carriers (see Turkish Jeeps in Army Service for more on these.) 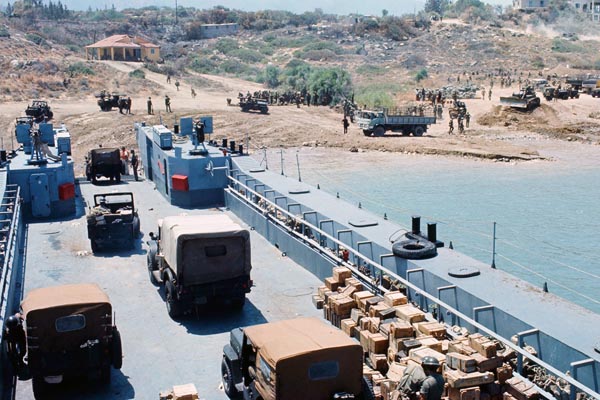 In this photo, Jeeps come ashore on Cyprus from a landing craft at Yavuz Beach (or "Five-Mile Beach"), west of Kyrenia.

The initial landing was unopposed, but the Greek Cypriot 251st Infantry, with five T-34 tanks, attacked the beachhead before the Turkish tanks came ashore, and the first Turkish losses included two of the recoilless rifles, before others were able to hit four of the five tanks (see Reported military losses.) 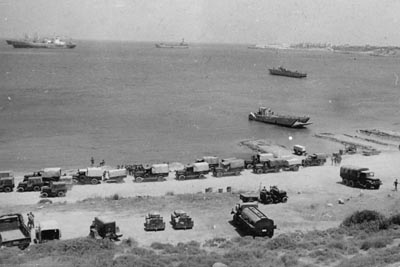 The landing was supported by the Turkish Navy. Over the next few weeks of fighting, thousands of troops and civilians on both sides were killed and wounded, but one of the biggest single Turkish losses was the sinking of a destroyer by friendly fire, with the loss of 54 lives.

As of 2014, Five-Mile Beach is a beautiful tourist resort, with a monument to the invasion on a hill above the beach (130K JPEG). 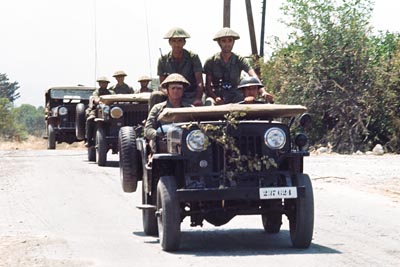 The Army advanced east from the beachhead toward Kyrenia, while the Turkish Air Force struck Greek Cypriot forces trying to reach Kyrenia to defend it.

Hard to know if the the small tree branch on the front of this CJ-3B has some symbolic importance, or is simply hurried camouflage. The Jeep also has the standard Turkish Army set of pioneer tools mounted on the front bumper. 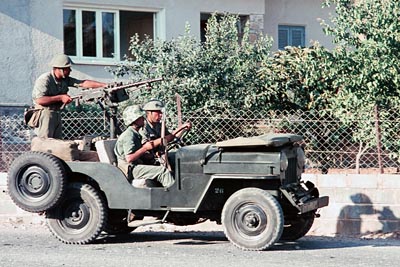 After Kyrenia was captured on 22 July, this 3B with machine gun was photographed on patrol in the city.

Most of the Jeeps appear to be Willys Jeeps, assembled at the Turk Willys plant in Tuzla, from CKD kits supplied as American military aid in the late 1950s and early 60's. Some have ventilating windshields with top-mounted wipers. With many of the windshields covered and folded down, it's hard to tell if any have the distinctive external wiper motor of the "Tuzla Jeeps" built at the plant in the late 60's and early 70's. 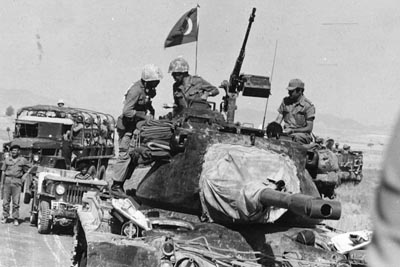 The tanks supporting the Turkish infantry were M47 Pattons.

The M47 had a lot in common with the CJ-3B Jeep -- they were both compromise updates to an existing design, reached under the pressure of the Korean War. When war broke out in 1950, the U.S. Army had decided it needed a new tank earlier than planned. Without enough time to finish the development of the T42 medium tank, the turret of the T42 was mounted on the existing hull of the M46 Patton. The composite tank was designated M47 and entered production in 1951. (M47 Patton) 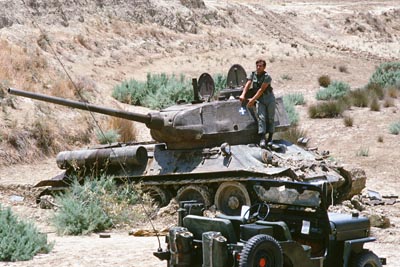 The opposing Greek Cypriot National Guard was equipped with T-34 tanks purchased from the Soviet Union in 1965. The Soviet T-34 had been a game-changer in World War II and was still an effective weapon, but the Greek Cypriots lost nine tanks on the first day of the invasion. Most were destroyed by air attack or light anti-tank weapons, but a Turkish officer is seen here after climbing out of his radio-equipped Jeep to inspect a T-34 abandoned due to mechanical failure. 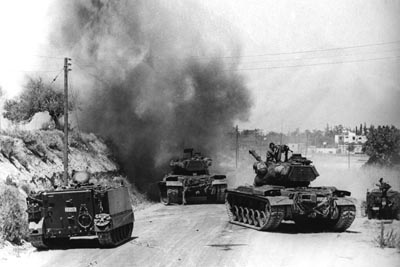 A recoilless rifle Jeep was photographed alongside two M47 tanks and an M113 APC during the aggressive drive to take Kyrenia. On 22-23 July the Turkish Army lost seven M47 Pattons to recoilless rifle, bazooka and anti-tank rocket fire. 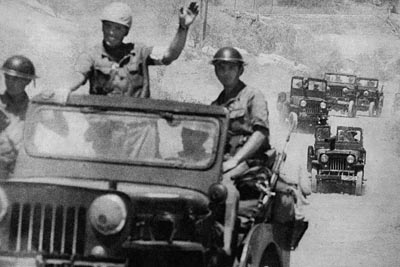 This column of Jeeps is speeding out of the landing beach on 22 July with the second wave of the amphibous assault. This photo and a rear view of Jeeps with M18A1 57mm recoilless rifles (200K JPEG) are reproductions from a now-defuct Turkish weekly newsmagazine, Hayat ("Life".) 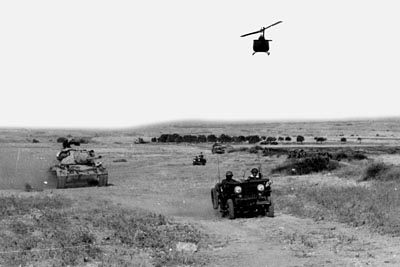 An initial ceasefire agreement was reached at the United Nations on 22 July, but peace talks broke down and Turkey renewed its attack on 14 August. Taking advantage of mobility and air support, the Turkish Army captured almost 40% of the area of Cyprus over the next couple of days. 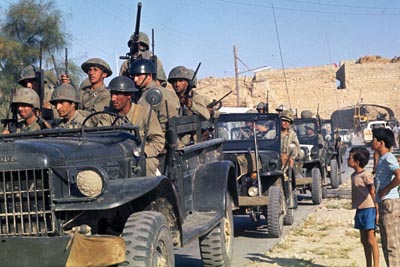 Nearing the end of the active conflict, the Turkish 28th Motorized Infantry Division is seen on 15 August 1974 with unit numbers and headlights covered, after taking the town of Famagusta. 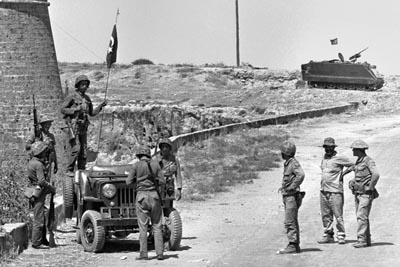 Another photo taken at Famagusta on the same day, was found by Leif Hellström in the Swedish Military Archives, and shows a Turkish Jeep and an M113 APC guarding an approach to the town. The rudimentary tool rack on the Jeep's front bumper is visible with no tools in place. 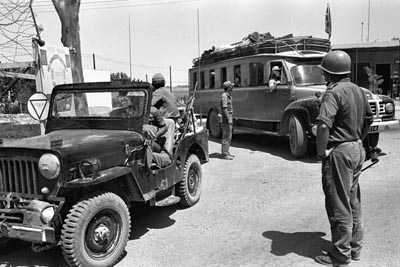 Once the Turkish enclave was established, the UN observers within it were ousted. Here a bus load of personnel from the Observation Post at Chatos are escorted to the UN Headquarters in Famagusta by a Turkish Jeep on 16 August. This gives another look at a fabric blackout screen fitted on the headlight, apparently stretched under the headlight ring. Photo from the Swedish Military Archives. 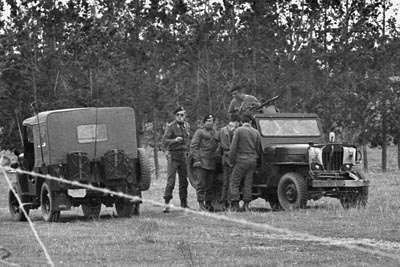 These Turkish troops are keeping guard outside a contested industrial area placed under UN protection. The Jeep on the left is obviously a command vehicle and has three radio antennas fitted. The one on the right has another type of cloth blackout screen, kept in place with strings. It is also fitted with a German WWII-vintage MG42 machine gun, showing the versatility of the Jeep when it comes to arming it. Photo from the Swedish Military Archives.

The invasion was followed by terrorism, atrocities and the displacement of many thousands of refugees. As of 2014, Cyprus is still divided into Greek and Turkish areas, separated by a "Green Line" supervised by United Nations peacekeepers. (See UN Forces in Cyprus on CJ3B.info.)

Significant international condemnation of the invasion included the suspension of U.S. military aid to Turkey for several years. Without Jeep kits and parts from Toledo, the Tuzla plant was forced to shift its focus from the assembly of new Jeeps to the refurbishment of the Army's existing vehicles. In the long run this meant that many of the CJ-3Bs were kept in service beyond the year 2000.

The photos seen on this page were released on the 40th anniversary of the invasion, by the Turkish General Staff. Thanks to Serhat Güvenç for letting us know about them, and Leif Hellström for finding photos in the Swedish Military Archives. Also greenacre8 on Flickr for the Five-Mile Beach photo, used under CC license. -- Derek Redmond

See the full story of Turkish Jeeps in Army Service on CJ3B.info.