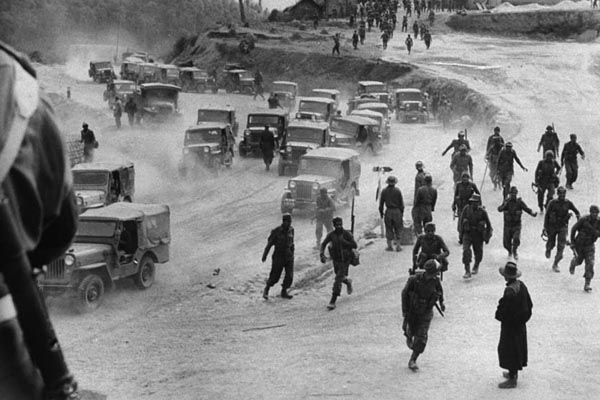 Looking a bit like the start of a Formula 1 race, Indian Army Jeeps pull away from a staging area in Assam in northeast India in November 1962. The caption for this photo in the LIFE magazine photo archive reads, "Indian troops on the move towards the Northeast border to stop Red Chinese invaders." 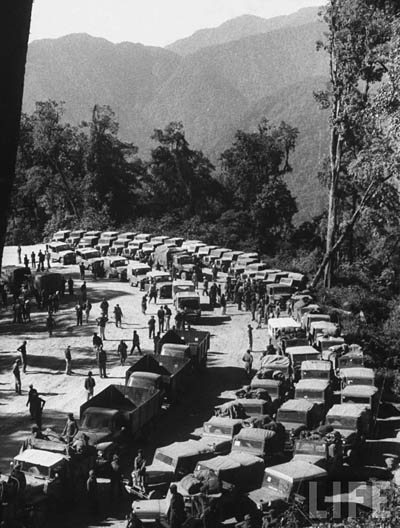 The 1962 Sino-Indian War involved a month of heavy fighting in harsh, high-altitude conditions, with huge logistical problems. There is no definitive history of the conflict, but reportedly some 1,300 Indian troops and 700 Chinese were killed before China declared a ceasefire, having seized much of the territory it claimed in both the northeast and northwest (Ladakh.) The fighting was followed by thirty years of standoff across the border of the disputed areas (see Wikipedia.)

This Larry Burrows photo, taken on another mountain road in Assam, is certainly a contender for the most high hood Jeeps ever seen in one picture, although there are also some other small 4x4 vehicles and a few trucks visible. 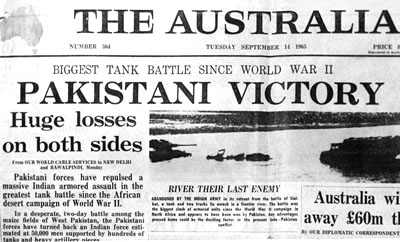 This war, precipitated by a Pakistani attempt to infiltrate Kashmir on 5 August 1965, resulted in over 3,000 deaths on each side, and saw the largest tank battles since World War II, with hundreds of tanks lost by each side. A ceasefire was declared on 23 September following diplomatic intervention by the Soviet Union and the US, and both sides claimed victory. (Wikipedia)

This Australian newspaper of 14 September 1965 gave the edge to Pakistan at that point, and showed an Indian Army CJ-3B abandoned in a river during a retreat. 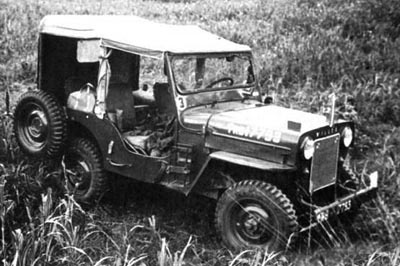 This photo (copyright Usman Shabbir) reportedly shows a Jeep left behind by Indian Maj. Gen. Prasad near Lahore, Pakistan, on 8 September 1965. The fact that he left his nice Willys (likely built by Mahindra in India) with the flag holder at the front of the hood, sitting in a field with his lugagge in the back, might suggest a retreat. 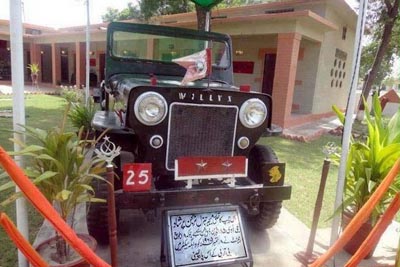 That Jeep, or more likely a similar one captured and identified as Gen. Prasad's Jeep, was placed on display by Pakistan's 18 Baluch Regiment, as seen in this photo from Native Pakistan.

The book 1965 War: The Inside Story provides more details of the retreat of Maj. Gen. Prasad, commander of the 15th Indian Infantry Division: "Utter confusion prevailed in the operations of 15 Division and by the evening of 8 September, the situation was indeed pathetic. The Divisional Commander had just managed to evade capture. The Commanding Officers of two battalions had lost mental balance and were unfit to lead their units. The Army Commander Lt. Gen. Harbaksh Singh had acted decisively and relieved the Division Commander and the two CO's of their command." 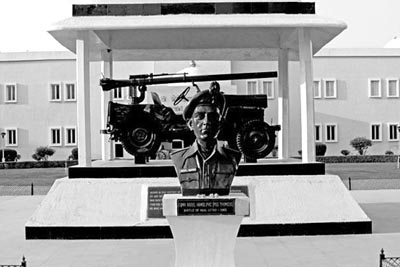 Another Jeep from that war is on display in India, at the headquarters of the 4th Grenadiers battalion at Asal Uttar. It's a memorial to an Indian hero killed in action on 10 September 1965. Company Quartermaster Havildar Abdul Hamid had served for 5 years in the anti-tank division of the 4 Grenadiers and reportedly was the best 106mm recoilless rifle shot in the battalion. So when Pakistani tanks mounted an attack in the Khem Karan area on 8 September, he took command of a recoilless rifle Jeep and helped repel the first wave of the attack by destroying two M48 Patton tanks. 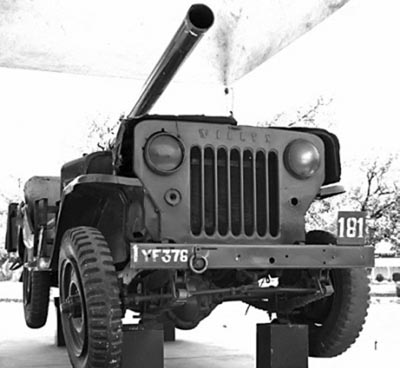 There are conflicting reports of how many tanks were eventually put out of action by Hamid in two days of action; at least five (Wikipedia) and as many as eight, before the eighth managed to put a shell into his Mahindra Jeep, killing him. Reports agree that he told his driver and loader to dive for cover at the last second.

Photos from 1965: Stories from the Second Indo-Pak War by Rachna Bisht Rawat. 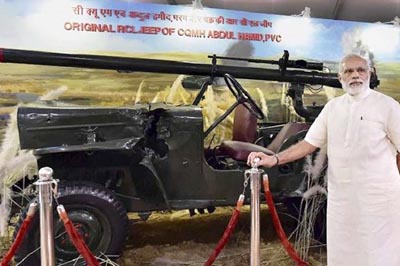 Abdul Hamid posthumously received India's highest military decoration, the Param Vir Chakra. The damage inflicted by the tank shell is visible in this photo of the Jeep with Indian Prime Minister Narendra Modi (photo from ndtv.com.) There is also a monument to Hamid in his home village of Dhamupur.

Thanks to Roberto Flores for finding that story. 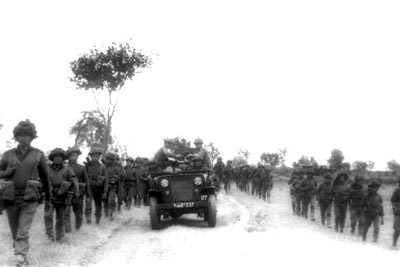 The two countries were back at it six years later. The Indo-Pakistani War of 1971 (see Wikipedia) was sparked by the struggle of Bangla Desh for independence from Pakistan. Although fighting lasted only two weeks, estimates of total combatants killed were greater than 12,000.

The source and location of this photo are unknown. 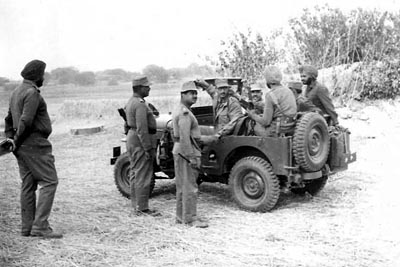 This photo from the Madras Regiment was taken in the Khalra Sector of Punjab, and appears to be another Major General's Jeep (with two-star plate behind the jerry can) although I have seen no details on the personnel shown. 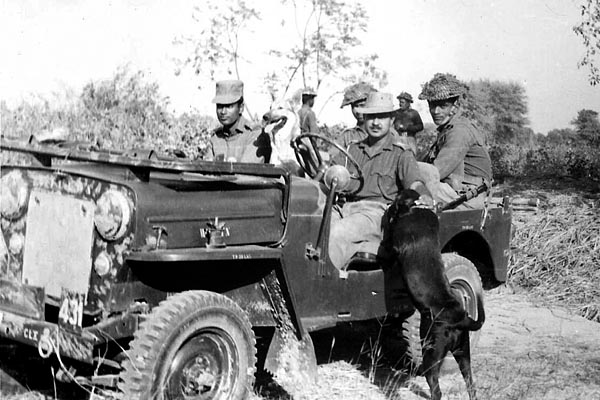 Also in Khalra Sector, this is Lt. Col. Jitendra Kumar of the 3rd Battalion, Madras Regiment. His Jeep has the fender bracket frequently seen on military Mahindras, although seldom seen in use holding a pickaxe head.

Photo courtesy of the Madras Regiment. 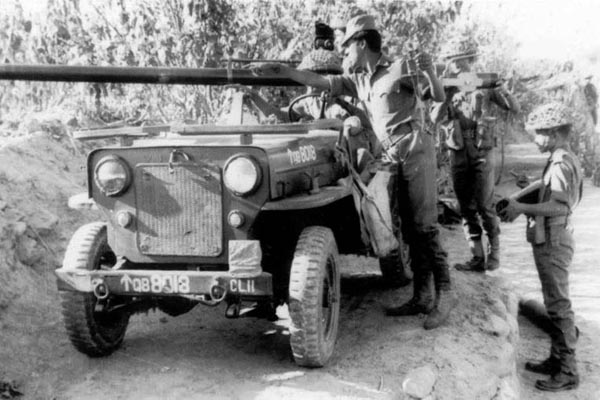 Recoilless rifles mounted on Jeeps proved again to be effective against tanks on both sides, as was also shown a few years later in the Turkish Invasion of Cyprus, 1974.

Source and location of this photo are unknown. 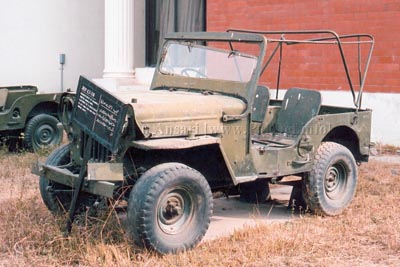 The result of the war was a significant defeat for Pakistan (Wikipedia), but some captured Indian vehicles are still on display at the Pakistan Army Museum in Rawalpindi.

This Mahindra Jeep was brand new when captured by the 6th Baloch Regiment in 1971 -- see the dash plate (240K JPEG) showing a delivery date of 1971. 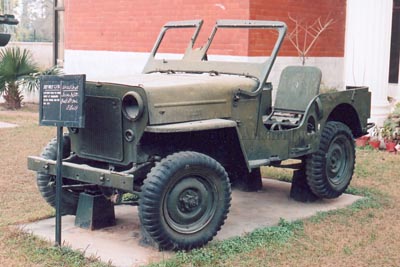 Another captured CJ-3B on display appears to be an earlier example with WILLYS stampings, assembled in India by Mahindra. The split windshield indicates that this Jeep carried a 106mm recoilless rifle. Photos courtesy of Pakdef.info. 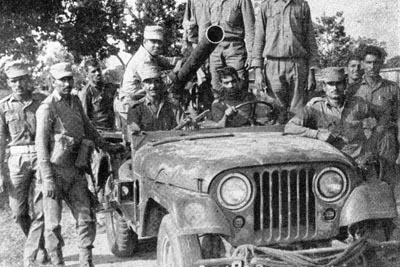 At the time, Indian units also proudly displayed captured Pakistani ordnance. Pakistan was strongly backed in the conflict by the United States, and that support was evident in the Pakistan Army's use of Jeeps such as this M38A1C, rather than just the basic M606 being delivered as military aid to many U.S. allies. 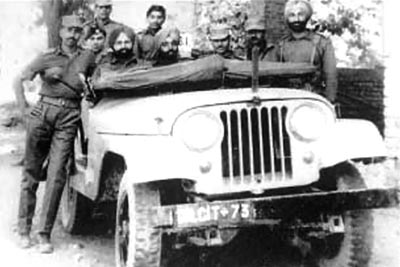 These jawans (Indian GI's) in the Sulemanki Sector, near the Pakistani border in Punjab, show off what appears to be a captured white CJ-5, possibly an officer's Jeep judging by the flagstaff on the hood. Photo by Ankur Sharma.

The city of Goa and the surrounding area on the west coast of India had been a Portuguese colony since 1510, while the rest of India was colonised by the British, who left in 1948. The Portuguese remained, despite increasing pressure from India through the 1950s. Indian Prime Minister Nehru was himself under pressure to continue to take the leadership in the anti-colonial movement in Africa and Asia, a position that China was eager to asssume. 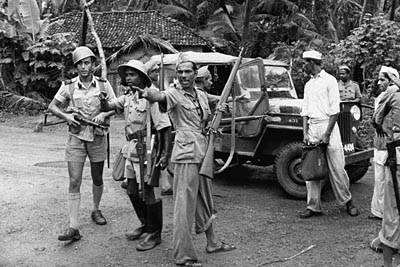 This August 1954 photo by James Burke from the LIFE photo archive shows "marchers on Goa encountering Goan Customs guards at the border." It's not clear who the Jeep belongs to, but the fellow on the left is clearly a Portuguese soldier. 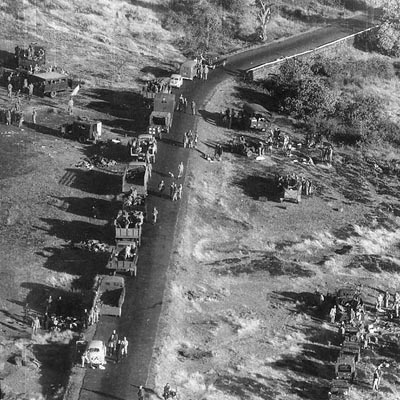 Nehru felt a military invasion of Goa was unavoidable, and in December 1961 the Indian armed forces executed Operation Vijay, in which some 3000 defending Portuguese troops were outnumbered approximately 10 to 1. It was the Indian Air Force's first opportunity to take its substantial fleet of jet-powered Hunter fighters and Canberra bombers into combat.

Portuguese forces abandoned vehicles and equipment on the road to the airport, from which there was no escape. 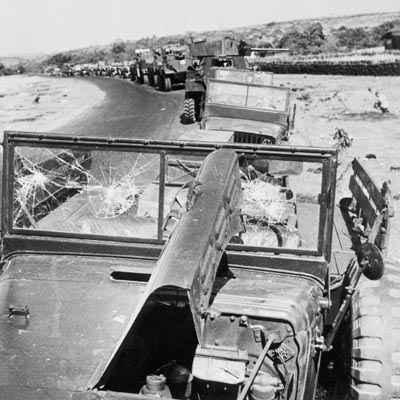 Some of the Portuguese Army vehicles dated from World War II, as seen in this photo of the airport road.

I was puzzled by the nature of the damage seen here. 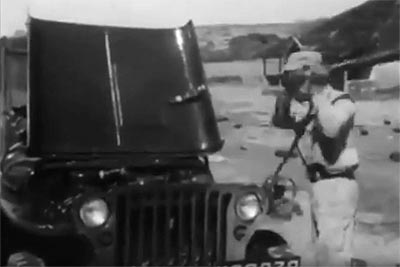 I found the explanation in newsreel footage of the retreat, showing Portuguese troops ordered to dismantle and damage their vehicles to render them useless to the Indian Army. This soldier is smashing a Willys MB with his rifle butt. 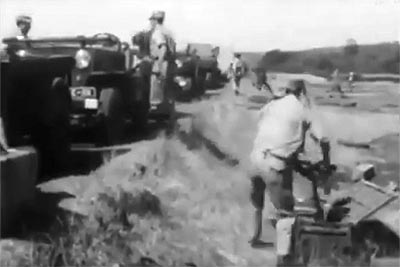 The footage shows that the Portuguese had CJ-3Bs as well as MB's, but I can't tell whether they may have been Mahindras purchased in India, or Willys Jeeps (as used by the Portuguese in Angola in 1961 -- see Army Adapts to Guerilla War on CJ3B.info.) 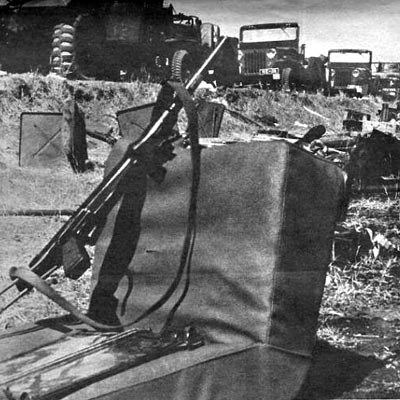 I wouldn't think that throwing the seats in the ditch was a very effective way of disabling the Jeeps, but apparently the soldiers were enthusiastically ripping out everything that could be detached. Hopefully this made them feel like they had at least accomplished something, when they were taken prisoner without a fight shortly afterward. 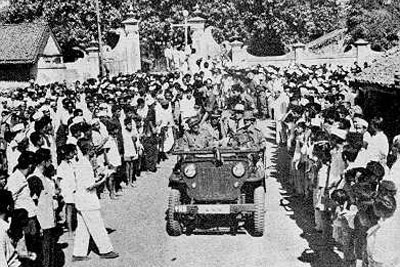 Any fighting was over in two days, and Lieutenant General (later General and Chief of Army Staff) J.N. Chaudhuri entered Panjim on 19 December 1961 in his Mahindra Jeep.

See Jeeps on the beaches of Goa fifty years later, in High Hood Lifeguard on CJ3B.info.