This page is superceded by Leif Hellström's much more detailed 2017 series of articles on Military Jeeps in the Congo, but this page does provide a summary of UN peacekeeping in the Democratic Republic of the Congo during 1960-64.

One of the flashpoints of both the Cold War and of the upheaval in post-colonial Africa in the early 1960s, was the fighting in the former Belgian Congo from 1960-64. An independent Republic of the Congo was declared in June 1960, despite the fact that it was clearly unprepared. In the first week of July, the army mutinied against its remaining white officers, and numerous attacks took place against Europeans. The problems were made worse when the copper and uranium-rich province of Katanga separated from the Congo, with the support of Belgian business interests and Belgian troops. Katanga had the potential to make Congo one of the more wealthy African states, but without it, the new nation would remain poor. 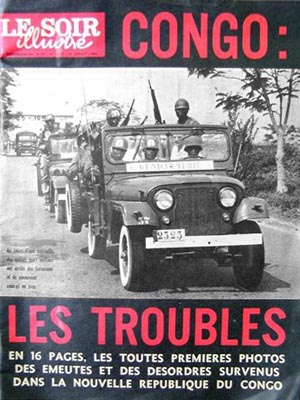 The cover of the Belgian newsmagazine Le Soir Illustré of 14 July 1960 reads, "In 16 pages, all the pictures of the uprising in the new Republic of Congo."

The photo of a Jeep labelled "Gendarmerie" is captioned, "During a patrol, black militia soldiers have arrested Europeans and taken them away in a Jeep."

In the first week of July, a rebellion had broken out within the Force Publique against its officers, who were still predominantly Belgian. This was a catalyst for disturbances arising all over the Congo, and in many areas the violence specifically targeted European victims. Within weeks, the Belgian military and later the United Nations intervention force evacuated the largest part of the more than 80,000 Belgians who were still working and living in the Congo. (Wikipedia) 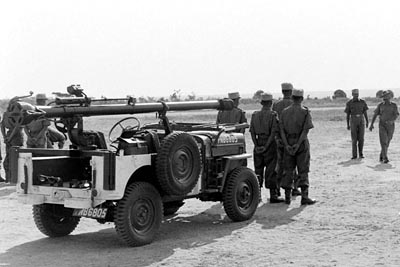 This 1961 photograph by Howard Sochurek from the LIFE Magazine Photo Archive at LIFE.com shows a Jeep and 106mm recoilles rifle manned by United Nations peacekeeping troops in the Congo, part of "Operation des Nations Unies au Congo," or ONUC. Thanks to Federico Cavedo for finding this picture in the archive.

The notes in the LIFE archive don't indicate the country of origin of the soldiers and vehicles in these photos, but they are apparently Indian -- note the paint scheme used by the Indian Army in the Congo, with the rear bodywork, front bumper and bottom half of the windshield painted UN white. 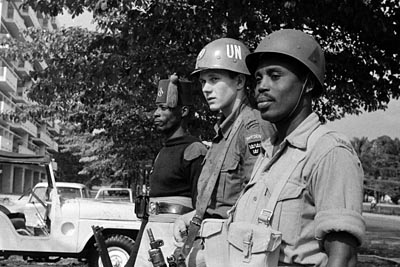 Contingents had begun to arrive in the Congo within 48 hours of a Security Council resolution on 14 July 1960 authorizing military assistance and calling on Belgium to withdraw its troops. This UN Photo of three soldiers in Leopoldville, was taken on 12 August 1960. The M38A1 in the background appears to be freshly painted UN white.

Thirty different countries contributed personnel to the operation, and in 1961 ONUC troop strength had reached its maximum of nearly 20,000. UN fatalities between 1960-64 included 245 military personnel and 5 international civilian staff. The UN's own records of United Nations Operations in the Congo state: "Originally mandated to provide the Congolese Government with the military and technical assistance it required following the collapse of many essential services and the military intervention by Belgian troops, ONUC became embroiled by the force of circumstances in a chaotic internal situation of extreme complexity and had to assume certain responsibilities which went beyond normal peacekeeping duties."

These controversial actions included offensive operations in 1961-62 against the breakaway province of Katanga, whose forces were supplemented with white mercenaries and Belgian officers.

The instructions of the Security Council were strengthened early in 1961 after the killing in Katanga of Congo's former Prime Minster Patrice Lumumba. ONUC was to protect the Congo from outside interference, particularly by evacuating foreign mercenaries and advisers. In late 1961, and again in 1962, the Katangan "Gendarmerie" (paramilitary police) and foreign mercenaries clashed with ONUC.

The world's attention was riveted on the Congo in 1961 by the death of UN Secretary General Dag Hammarskjöld in a mysterious air crash, while on his way to assist in peace negotiations. (The crash was later linked inconclusively to the American CIA and British MI5.) 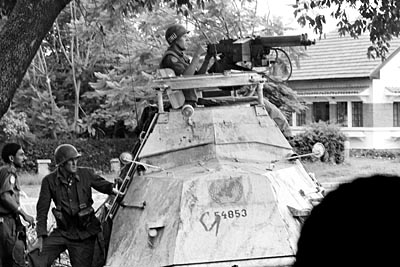 This UN Photo shows a damaged Swedish SKPF armored personnel carrier under attack by Katangan and mercenary forces on the outskirts of Leopoldville, 1 December 1961. ONUC troops use the vehicle for cover while returning fire from its twin Colt 8mm water-cooled machine guns. 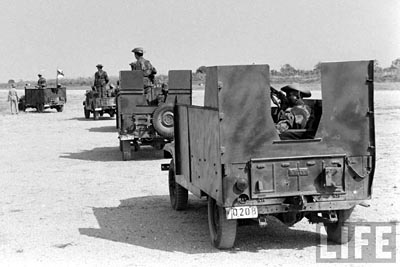 A 1961 photo by Howard Sochurek from LIFE.com shows four armored CJ-6s manned by Katangans and mercenaries, with Belgian officers.

Jeeps and machine guns had been a significant factor in favor of the mercenaries in their earlier brushes with the ANC and UN forces, many of whom had been equipped with outdated small arms. 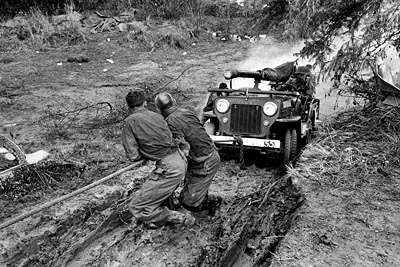 Although some Indian units were called home for the India-China War of 1962, this 106mm Willys/Mahindra CJ-3B was still in the Congo on 3 January 1963. According to UN archives, "Indian troops are seen manoeuvring an armed vehicle in an area between Elisabethville and Jadotville" in the UN Photo.

United Nations Operations in the Congo (ONUC) concluded in June 1964, by which point some of the same mercenary forces had returned to fight for the Congolese government against communist-supported rebels. (See Mercenaries vs. Rebels on CJ3B.info.) 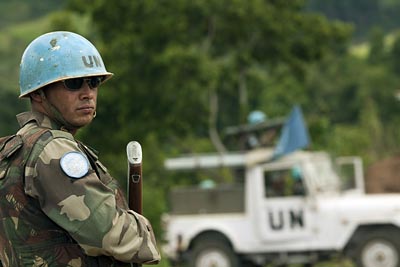 UN peacekeepers were called back to the Congo in 2001, and were further reinforced in 2009. In this UN Photo by Marie Frechon, "A member of the Indian battalion of the United Nations Organization Mission in the Democratic Republic of the Congo (MONUC) patrols the newly installed operating base at North Kivu, 23 April 2009."

At least one contingent in the current UN force still has Jeeps on the ground, as evidenced by the Mahindra in the background here.

Thanks to UN Multimedia and LIFE.com. -- Derek Redmond.