This page is superceded by Leif Hellström's much more detailed 2017 series of articles on Military Jeeps in the Congo, but this page does provide a summary of some of the mercenary activity in the Democratic Republic of the Congo, after the departure of the UN peacekeeping force in 1964. (See Peacekeepers Go to War.)

The conflict in the former Belgian Congo in the 1960s was lengthy, complex and brutal. One of the many interesting and surprising aspects was that European mercenaries who fought with Katangan forces against the Congolese Army (ANC) in the early 1960s, and were expelled from the country by UN peacekeepers, returned by early 1964, this time to assist the ANC in fighting Communist-supported rebels.

According to MercenaryWars.net, "The rebellion in the Congo was the first real war in modern day Africa, and included not only thousands of Belgian troops and rebel forces from Cuba under the command of Che Guevara, but eventually also a few hundred white mercenaries, recruited in South Africa by the Congolese government, who were formed into a unit called '5 Commando', which was ultimately destined to bear the brunt of the fighting. It was clearly understood by all that the rules of engagement were, 'No quarter asked, no quarter given,' which resulted in savagery and inhumanity on a scale previously unheard of in Africa, and extremely high casualty rates." 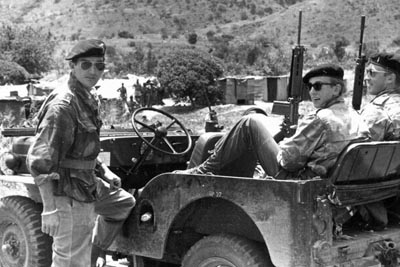 This photo came from Codoki Commandos du Kivu 64-65, a website of recollections (in French) of the conflict in Kivu in the eastern Congo. "Codoki" is an abbreviation for "Commando Kivu," a unit fighting Simba rebels in the area along the west side of Lake Kivu, just across from Rwanda.

These Codokis with automatic weapons are driving a Kaiser military M606.

Irishman "Mad Mike" Hoare (see Wikipedia) and many of the same mercenaries who had been fighting against the Congolese Army and ONUC, were back in business by late 1963 as "5 Commando" on behalf of the Republic of Congo and with the support of the CIA, trying to put down the communist-backed Simba rebels.

The U.S. and Belgium tacitly approved the use of mercenaries, as long as no Americans or Belgians were involved. Thus 5 Commando was recruited in South Africa by Mike Hoare, while Robert Denard led a force of French and other European nationals. 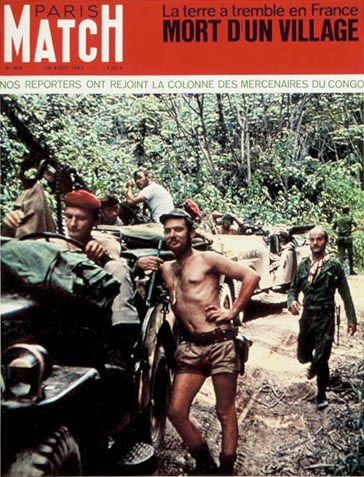 Paris Match magazine published an article on mercenaries in Congo in their issue of 29 August 1967, including this color photo on the cover, which had apparently been taken some time earlier. In addition to the M606 in the foreground, a close look reveals a sand-colored CJ-6 in the background, with "Police" stencilled on the hood.

The organization Orbs Patria Nostra identifies this picture as showing the "1st Choc" of 6 Commando, which was led by the French commander Colonel Robert Denard. The French term Choc ("shock") was used to identify smaller units of a Commando group. 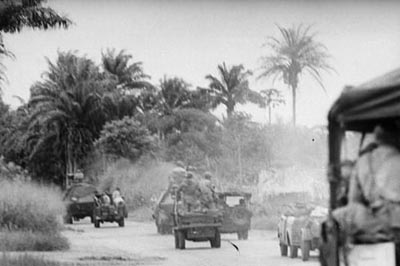 The dramatic commando raid "Operation Red Dragon" grabbed world attention on 24 November 1964. Hundreds of Belgian paratroopers flew from Europe in USAF Hercules transports, to seize Stanleyville airport and rescue European and American hostages from the desperate Simba rebels. Scores of hostages were killed, but some 1600 were rescued.

Jeeps were involved in that operation (left), as a column of mercenaries and Congolese troops survived several ambushes (70K JPEG) and rushed into the city to support the paratroopers.These images by Priya Ramrakha are from the LIFE Magazine Photo Archive. 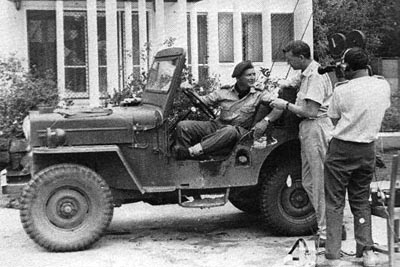 The source of this photo is unknown. It reportedly shows Mike Hoare being interviewed in Stanleyville by the BBC.

Mike Hoare was not the only legendary foreign commander to fight in the Congo. The arrival of Che Guevara with 73 men in early 1965 was an attempt to help the Soviet-backed rebels against the American-backed Congolese Army, but Che and the Simbas were driven from the country by the end of the year. 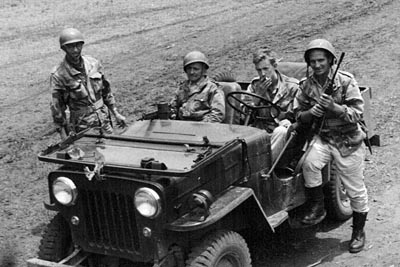 Like the GI's of WWII, the mercenaries understood the importance of their Jeeps. Rule No. 7 of 5 Commando's Ten Rules of Battle under Major Mike Hoare was: "Look after your vehicle. Fill it with petrol before resting. Clean it. Do not overload unnecessarily."