Around Christmas, we're thinking more than ever about the military personnel posted away from their homes and families, doing a dangerous job in troubled parts of the world. Of course Canadians and Americans in 2008 are thinking particularly of Afghanistan and Iraq, but Lebanon is another part of the Middle East where foreign troops have been posted, trying to keep the peace, for thirty years. The United Nations Interim Force in Lebanon (UNIFIL) was created in 1978 after Israel occupied southern Lebanon in response to Palestinian raids across its border. As of late 2008 there were still over 12,000 personnel from a number of countries active in UNIFIL.

The previously unpublished photos by Erik Kuiper seen here show NEKAF Jeeps in action with Dutch forces in southern Lebanon during Erik's posting there from November 1980 to June 1981. 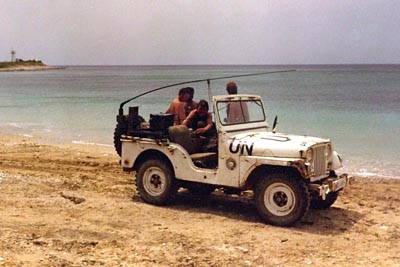 Christmas on a Mediterranean beach might not seem too bad, but this scene wan't typical of UNIFIL Jeep patrols. Erik says, "The Jeeps proved to be tough enough to handle the harsh conditions in the mountainous hills of thesouth of Lebanon. Bad roads, lots of rocks and holes on and in the roads, and occasional steep climbs.

"The original Dutch license plates were gone by that time and replaced by UNIFIL plates. I vividly recall my time driving UNIFIL 1064 seen here. Another shot of the 1064 with its front grille removed (200K JPEG) was theresult of a puncture in the radiator." 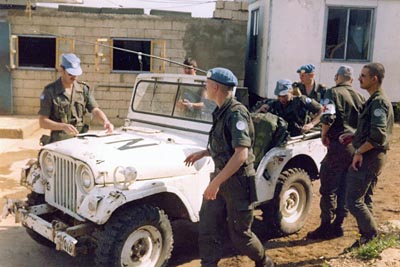 The NEKAF version of the M38A1 was built from 1955 to 1959. Erik comments that "Originally our 44 PAINFBAT (44th armored infantry division) was equipped with the older types of vehicles, many built by DAF in the Netherlands. At the time of duty in Lebanon they were well over 20 years old; that was older than many of us were at the time. Fact is, many of the trucks there were out of service. That certainly had to do with their age, but also with the driving capabilities of the mostly young, drafted, inexperienced drivers and of course the harsh conditions over there. The mechanics did wonders keeping the fleet rolling." 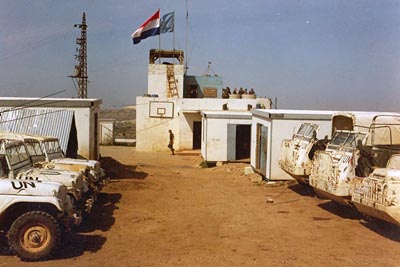 Erik says, "This is Post 7-8 (seven dash eight), Dutchbatt, 44 PAINFBAT, UNIFIL. Post 7-8 was the command post of the Heavy Weapons Company (mortars and TOW missiles) and was located near the village of Siddiquine. On the left are four NEKAFS belonging to the Heavy Weapons Coy.

"On the right are three DAF-built trucks. Far right is 'my' truck, a DAF YA 126 ambulance, UNIFIL 4042. It was nicknamed 'Hotlips' after the illustrious Major Houlihan from the TV series MASH. The two other trucks are DAF YA 328, built in the fifties with a patented rear axle couple.

"You can see our sleeping quarters left and right behind the trucks. The blue building was the radio room. The highest part was an observation post, as well as a defending position armed with a .50 caliber machine gun. In the background you can see the hills of southern Lebanon; the picture was taken looking west in the direction of the Mediterranean, unfortunately not visible in the picture. We could see it from 7-8 though." 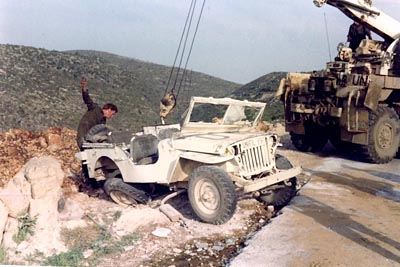 Some 266 troops and 13 other staff have been killed in the 30 years of UNIFIL, including the French soldier driving this Jeep in early 1981. It appears to be a Hotchkiss M201, similar to the Willys MB. Erik recalls, "The Jeep in the picture got off the road, hit a big rock and turned over. No safety measures, no roll bar. Sadly the French driver died later of injuries sustained. Sad memories, but we did our best to rescue the three men that were in the Jeep. The injured were transported to hospital by an Italian heli (Bell Huey), a real Medivac just like MASH." 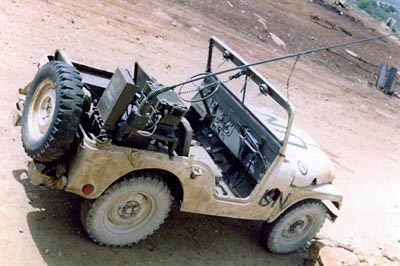 UNIFIL 1087 seen here had the nickname "The Blitz Car" painted on the hood, and black-painted front grille (see a front view and side view, 200K JPEGs.) It carried an RT3600 radio set, and the passenger grab bar made a convenient rifle bracket.

Erik also says, "I recall that rear view mirrors were particularly hard to get; many were damaged or 'lost' in service. Some of them, damaged or not, were used as shaving mirrors." 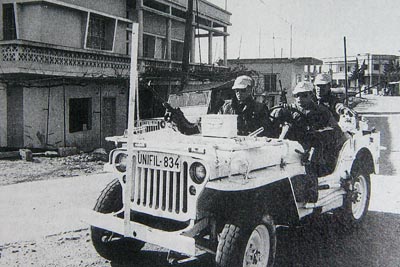 Some of the UNIFIL Jeeps did carry heavier armament. This French Hotchkiss (photographer and date unknown) has a mounted machine gun.

Norman Meyer, also in the Netherlands, writes, "Just like the Dutch forces declined to send their new Land Rovers to Lebanon when they took over the positions from Frenchbat, but used their Nekafs (licence built Willys M38A1) instead, so the French must have thought it only natural to bring their aging vehicles like the Hotchkiss M201. In fact, it may still have been in active service; the Peugot P4 copy of the Mercedes G was not available until some time in the 1980's." 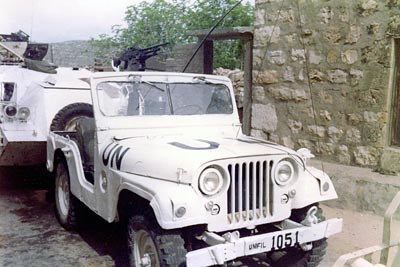 UNIFIL 1051 was a Nekaf with a 7.62 MAG machine gun. Erik says, "1051 belonged to another company (Alpha) of our battalion. Norman Meyer here in Holland purchased a Nekaf and made it into an exact reproduction of this Jeep, complete with machine gun on the mount. I had the privilege to drive with him in his Nekaf during a liberation parade at Wageningen, 2005." 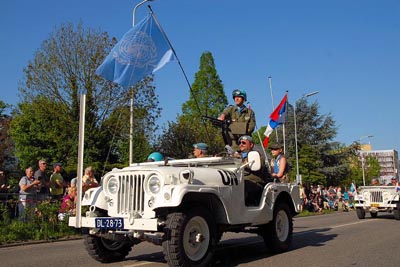 Norman Meyer's replica UNIFIL Nekaf is seen here at a 2008 event in the Netherlands. It's nice to see this chapter of United Nations peacekeeping being well remembered.

Thanks to Norman Meyer and Erik Kuiper for the information and the copyright photos on this page. -- Derek Redmond