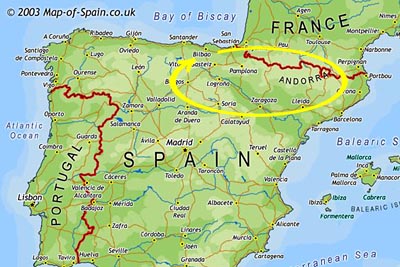 We've been waiting for years for the opportunity to visit Spain, and in the summer of 2008 my wife Roseanna and I and our daughter Amelia finally made it, spending three weeks in northern Spain and southern France. We encountered very few other foreigners; most of the tourists were from southern Spain, coming to the mountains and the northern beaches to escape the heat in the south.

We saw beautiful scenery, met a lot of wonderful people, and rode in quite a few Jeeps. So there are plenty of photos I'd like to show, and I'll have to spread them out over several pages. -- Derek Redmond

The arrow on the map shows our approximate 3-week itinerary. We landed in the fascinating city of Bilbao (which we toured more extensively when we returned later) and quickly headed a short distance south to spend some time with Iñaki Bilbao at his summer home in the little village of Condado.

Thanks to Iñaki and Almudena for their hospitality, and Andy Roberts for his Creative Commons photo of the church of San Juan. -- Derek Redmond

Continue to Part 2: The Pyrenees or Part 3: Camprodon or Part 4: Bilbao.

See the history of Jeeps in Spain.