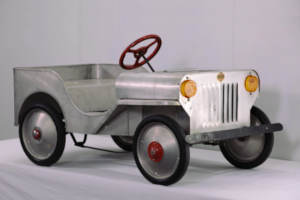 You don't see one of these very often, and you'll know it when you do, because they're aluminum. They were made by Western Toy Mfg. Co. of Seattle, starting as early as 1946. The Jeeps had battery-operated lights, and came with a seat cushion but no windshield. 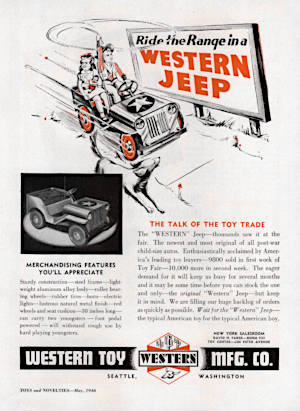 This May 1946 ad gives the impression that the Western Jeep was initially selling so well that the company had difficulty keeping up with orders. However, since the Jeeps are so rare today, it seems apparent that for some reason they didn't stay in production for very long. 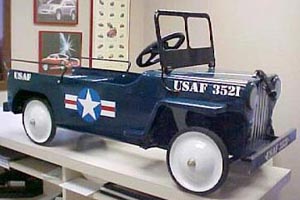 The pressed-steel pedal-drive Jeeps made by Hamilton Steel Products of Chicago were a hot toy through the 1950s and early 60's, and for some reason the Air Force Jeep became perhaps the most popular version. Others included a Fire Engine, Tow Truck, Surrey, Army Jeep, and Roy Rogers' Nellybelle (see Nellybelle Toys.) 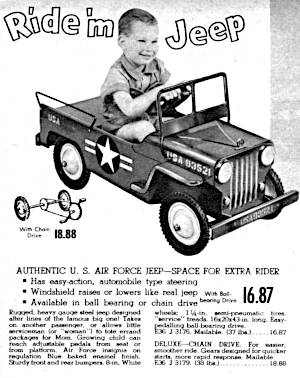 This 1960 catalogue listing shows prices for both a standard reciprocating pedal drive and a chain-drive version.

See more details and photos of the Hamilton Pedal-Drive Jeeps. 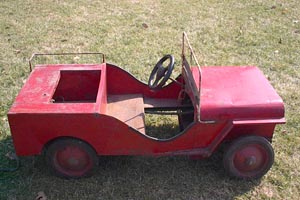 A nice example of the pedal Jeep built by Junior-Pro Products in St. Louis has turned up. This one, photographed by Melissa Burton, has the optional electric motor under the rear seat.

See more details and photos of the Junior-Pro Electric/Pedal Jeep. 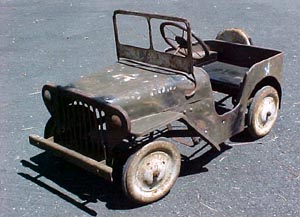 The Tri-ang toys from the UK, with their distinctive narrow rubber tires on large metal wheels, were also sold in North America. They were built in several other countries in addition to the UK, and are found under the brand names Thistle, Cyclops and Anchor.

See more details and photos on the page of Tri-ang Pedal Jeeps. 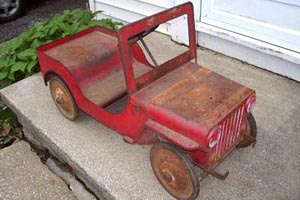 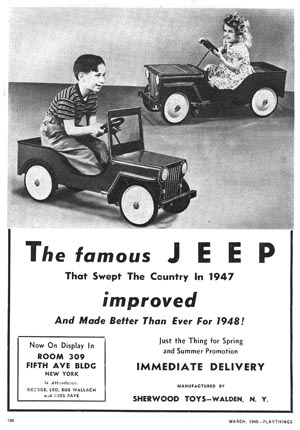 A March 1948 ad mentions that the toy was introduced in 1947, and clearly shows that the design was based on the civilian CJ-2A rather than the earlier WWII jeeps. Dimensions were 42" long, 15-1/4" wide, and 21-1/2" high at the steering wheel with the windshield folded down.

The windshield was obviously too tall, but this was perhaps not a bad idea, as it makes a youngster like the one in the ad, who is verging on being too big for the toy, seem less out of proportion. 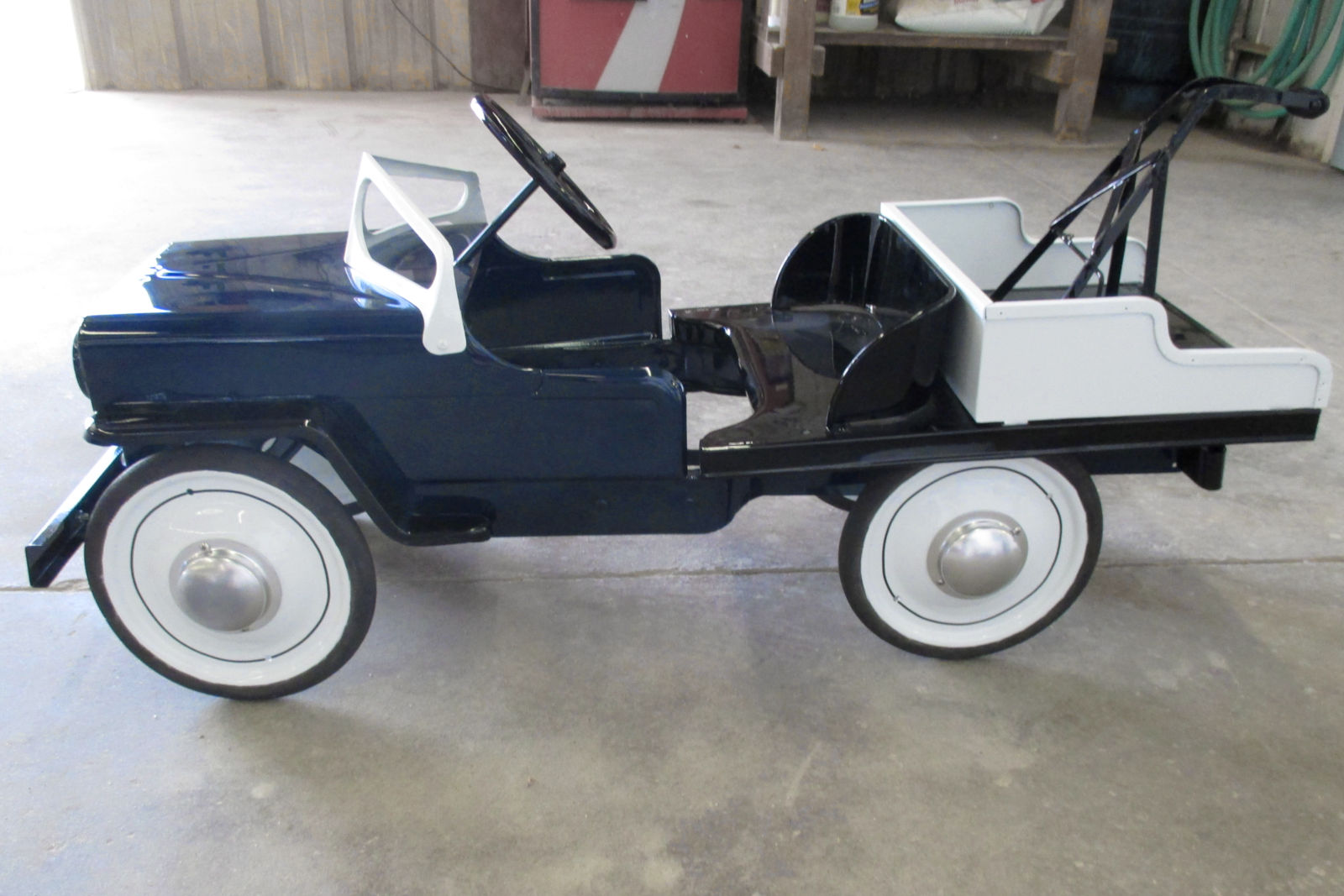 In the 1950s Sherwood began selling a wider range of models including some with an un-Jeeplike V-shaped windshield. This example is a tow truck restored in 2015 by Nielsen Body Shop Inc. in Nebraska. 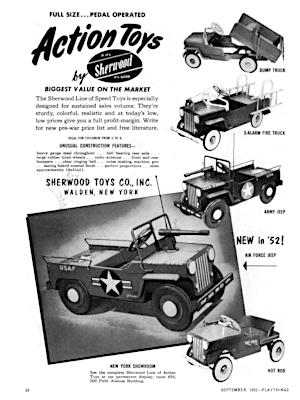 This advertisement shows Sherwood's 1952 line. Possibly the intention of the V-shaped windshield was to try to avoid licensing issues with Willys, or with Hamilton. However, the Army Jeep (50K JPEG) and Air Force version shown here were virtually identical to Hamilton's models, the only apparent differences being the added machine gun and radio antenna.

Sherwood's 1953 line (230K JPEG) introduced some spindly, rounded windshields in place of the V-shape, and also included Roy Rogers' Nellybelle. I'm not sure whether Nellybelle was first produced by Sherwood or Hamilton. 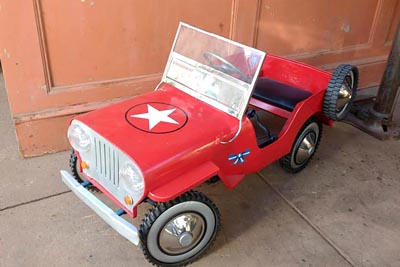 Broadway pedal Jeeps were made in Buenos Aires, Argentina through the 1950s and 60s. As pedal cars go, they were a pretty accurate miniature CJ-2A. 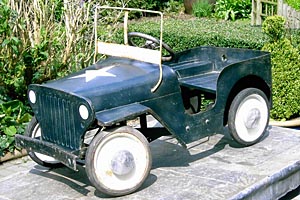 Torck was a Belgian manufacturer of pedal cars using a Jeep design very similar to Tri-ang. This 1958 example is from the extensive Torck collection of Katrien Lingier and Peter Van Veirdegem in Deinze, Belgium. See also a top view of a 1956 Torck (100K JPEG).

See more details on Torck toys on Katrien and Peter's website in Belgium. 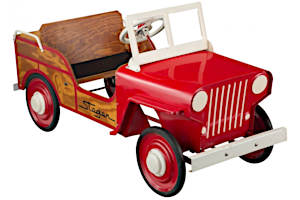 The Jeeps made by Steger Products Mfg. Corp. of Chicago can be recognized by their wood sides and back attached to a steel front end. This 42-inch (107cm) Steger (right) was also sold as a "Fire Patrol" version with ladders and bell added (see Pedal-Drive Fire Jeeps.) 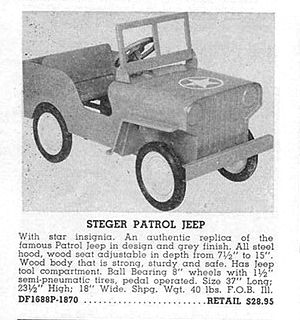 A catalogue listing circa 1955 shows a shorter Steger (37 inches), calling it an "authentic replica," and indeed the Steger is certainly one of the most realistic of the pedal Jeeps. The Patrol Jeep is painted grey, but also uses the wood/steel construction. 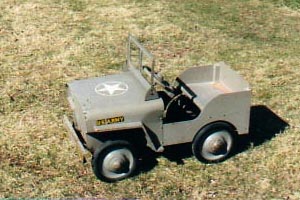 This Steger (right) found by Gary Keating has an even shorter wheelbase. An earlier catalogue shows this version as only 32 inches long (80K JPEG) although it gives the same 40-pound (18kg) shipping weight. 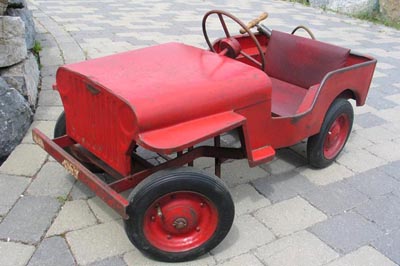 The Jeepy pedal car was built in Norway by Sigurd W. Ødegaard, who reportedly produced about 3,000 between 1946 and 1952. See an ad (100K JPEG) for the Jeepy, and a top view photo (60K JPEG). Well proportioned and well-built, many of the Jeepys still survive in Norway. Thanks to Even in Norway for posting the photos at eWillys. 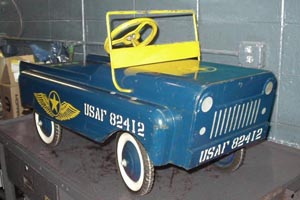 This colorful U.S. Air Force Jeep was identified by Rick Leroy as a Garton model 5400. 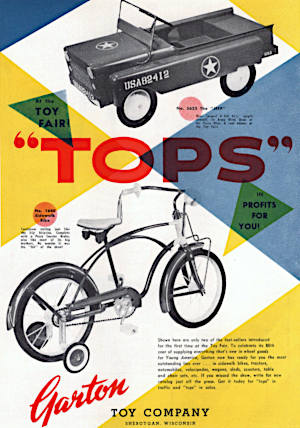 A 1959 ad from the trade magazine Playthings shows the Army version (70K JPEG) with the same stencil number as the USAF version.

The Garton is perhaps the least Jeep-like of the Jeep pedal cars, but the front grille and folding windshield would seem to qualify it as such, and in fact this ad identifies it as The "Jeep" -- the use of quotation marks suggesting that there may have been a licensing agreement with Willys Motors. 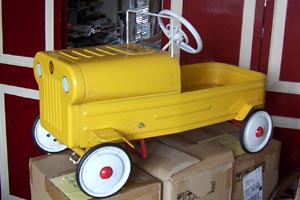 The Mobo Scout Car dating from the 1960s had a distinctive shape but was clearly inspired by the Jeep. This one was photographed by Andy Doran in the UK.

A nice rear view photo (200K JPEG) of a Mobo from Katrien and Peter shows details including instruments on the dash. 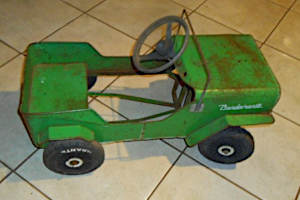 Model 448 from the Brazilian firm Banderainte was their Jeep, basically a rectangular box with front and rear fenders added. It came in various colors including a red fire truck version (see Pedal-Drive Fire Jeeps.) 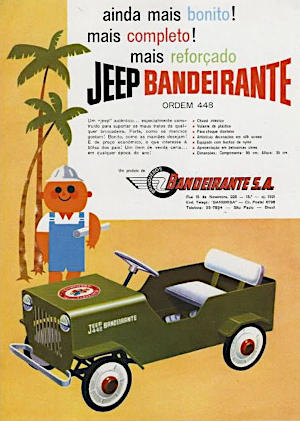 As of 2021, a reproduction of the Banderainte is apparently still being produced by Garagem Pedal Car in Brazil. They have offered it in a number of liveries, including Brazilian Army and ambulance (50K JPEGs). 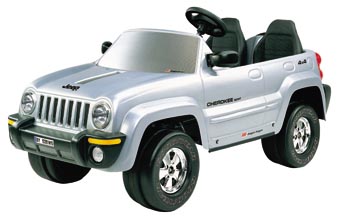 This Liberty (still called a Cherokee in Europe) from TotCars in the UK was a pedal Jeep for the 21st century:

"The new Jeep Cherokee dual pedal is the ultimate 4x4 pedal car for kids. Made under license from Chrysler Jeep, this is an authentic little version of the real thing. Featuring a spacious two-seater interior with steel chassis, tough polypropolene body, rotary pedals for both drivers, alloy-look wheels and all the authentic Jeep badges. The pedal system enables the Jeep to be powered by the driver alone or both the driver and passenger." 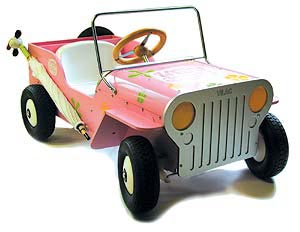 In a bit more of a classic style, this all-wood flatfender was built until about 2004 by Vilac, a French company which makes a wide range of wooden toys. Jerome Stevens says he found it selling for about 400 Euros in late 2003. The pink one had flowers and an umbrella. There was also a fire Jeep complete with shovel. 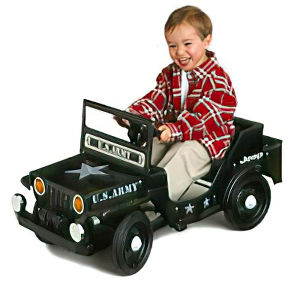 A little smaller, and cheaper at US$230 was this U.S. Army pedal Jeep, apparently licenced by Jeep Corporation, which was available online for a few years. 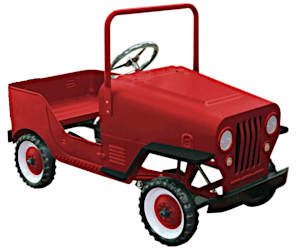 On the other hand, this "Four by Four Pedal Car" is apparently not licensed to use the Jeep name. As of 2021 it was still for sale on the Summit Racing website for US$210, although listed as "not in stock." At 33-1/2 inches (83cm) long, it too is suitable only for fairly small youngsters. It has been seen with "Fire Chief" graphics (90K JPEG) although without any fire truck accessories.