Installing an Alternator in the CJ-3B

The Jeep's wiring harness and alternators are a lot more versatile than most people realize. Although the stock CJ-3B uses a generator, all that nearly any alternator system needs to function is a charge indicator light as it is wired in the later CJ-3B. A "one wire" alternator is the way to go in pre-1956 Jeeps that are equipped with an ammeter instead ofthe indicator lamp.

The additional output current that a modern alternator can provide as compared to a generator or an old alternator is the best reason for making this change to a Jeep, and it may be required if you are converting to a newer engine.

The stock generator was sized to be able to operate all of the electrical equipment that was factory installed in a Jeep and still have some spare capacity left over to charge the battery. Unfortunately, this spare capacity was kept to a minimum. Adding even a modest amount of extra electric load to the system, such as additional lights, will likely exceed the capacity of the stock generator or alternator.

The larger capacity alternator will save you the possibly tough decision about what to turn off!

Note: These instructions assume you already have a 12-volt electrical system. If you are converting from a 6-volt generator, there are some additional steps to avoid component damage or a potentially dangerous battery explosion. See Converting a 6-Volt Jeep to 12-Volt.

Both a generator and an alternator perform the same function -- supplying electrical energy for the electrical equipment in the Jeep.The major differences between the two are related to which of the two coils of wire within the device generate the current that is supplied to the Jeep's electrical system, and the method of converting the AC voltage generated by the device to DC voltage.

To convert the AC voltage to DC voltage and to provide an electrical connection from the rotating armature to the Jeep's electrical system, brushes and a commutator are used. The commutator is a copper cylinder that is split into several separate segments. It is located at the back of the armature. The brushes are blocks of carbon that rub against the commutator.

The brush and commutator system is not very efficient at high electrical currents such as those needed by the Jeep's electrical system, and much of the electrical energy is lost as heat. This is why most automotive generators are limited to 35-45 amps output current. To significantly increase this current would require a much larger generator.

The conversion of AC voltage to DC voltage within the alternator is done with the use of diodes. Not only are the diodes much more efficient at this task than the commutator/brush system used in generators, but they can also handle higher currents.

In the blue Universal Jeep Service Manual, figure H-23 on page 196 is actually the wiring diagram that shows how to hook the CJ-5's stock Motorola alternator to a post-1956 CJ-3B. It does not say this in the book, but it will work. Since the diagram illustrates testing the alternator, ignore the "DC Volts" meter that is shown attached to the AUX terminal of the alternator:

The wire colors mentioned in figure H-23 are the colors of the wirescoming out of the regulator. These wires are a few inches long andend at a 3 wire connector. I have found these wire colors to beconsistent among 3 different manufacturers of replacement regulatorsfor Motorola alternators. If you are converting to a Motorola alternator, make the connections between the alternator and regulator as shown in figure H-23 above.

Figure H-38 below assists in identifying the terminals on Motorola alternators:

The standard Delco SI alternator uses three or four wires depending on "purity of the user". The fourth wire is a ground wire and is usually not needed.

The "one wire" alternator kit that Bruce mentions in the CJ-3B Engine Conversion Manual is a slightly modified Delco SI alternator which can be simpler to install, particularly in a pre-1956 CJ-3B with an ammeter on the dash. One thing that I have noticed on the one wire alternator is that I have to rev the engine to get the alternator to begin charging. Once it begins charging, it continues charging even with the engine at idle. I asked about this at the alternator rebuild shop and they told me that this was normal. (Now that I think about it, and how one wire conversion works, it seems normal to me too.)

The Delco alternator is a great improvement over the stock Motorola and Prestolite alternators. Changing the alternators is something to be considered if one is doing an engine swap. It is much easier to find replacements for the Delco should it fail, and depending on the model, the Delco has as much as three times the output current to run the electrical system. This is very important if one is considering extra lighting as the stock Motorola and Prestolite can provide only 35 amps. About 30 amps are needed to run the headlamps, stop lights, engine ignition system, horn and heater blower motor.

The only trick to the whole thing is to find the charge indicator lamp wire. In looking at the wiring diagrams of the CJ-5 or post-1956 CJ-3B (see the Parts Illustrations page), it will be the only wire that attaches to the alternator or regulator from the wiring harness that goes through the firewall. (The wiring diagram of the early CJ-3B might as well be the wiring diagram for a CJ-3A with turn signals.)

Before tearing apart the wiring to find it, you can try this test:

If you want to be absolutely safe, go to the parts store and get an inline fuse holder with a 5 amp fuse in it. Connect one wire of the fuse to what you believe is the charge indicator lamp wire and touch the other end of the fuse to the Jeep's body. If you have the correct wire, the lamp will follow the description at the end of the previous paragraph. The incorrect wire will either do nothing, or blow the fuse.

If you don't want to go through all this, you can take apart the wiring harness and follow the wire back to the proper bulb in the instrument cluster.

The wire from the wiring harness that is connected to the regulator's A terminal should be the charge indicator lamp wire. This can be verified with the tests described above.

When you get ready to remove the existing regulator, the two wires that connect to the regulator's B terminal should be connected together. This will ensure that current can flow to the Jeep's electrical system. The wires that go between the regulator and the generator can also be removed.

Mounting the alternator on a 134 engine 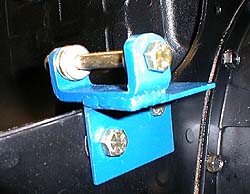 Recently I visited Willys Works in Tucson, Arizona and found that they are making a bracket to mount an alternator to the front plate of a 4-134 Jeep engine. This bracket mounts into two existing holes in the front plate of the engine. The acompanying photos show the mounting arrangement. 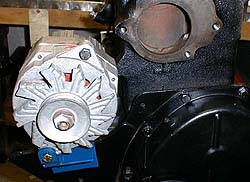 
To mount an alternator on another 4-134 engine, I used a "universal alternator mounting adapter kit". I bought mine about 8 years agofrom a local alternator rebuild shop, but I called there a few months ago to get another one and they no longer sell the kit. You may be able to find a kit for the alternator you have, or you can fabricate a universal one as follows:

The drawing shows the brackets in the kit and how they are arranged. The kit I bought used four 1-inch wide, 1/8" thick L-shaped brackets arranged as shown. To make the kit universal, the manufacturer drilled several holes in the lower two brackets and machined slots in the upper brackets. This allowed great freedom to move the upper two brackets around as necessary so the alternator's pulley could be lined up with the other pulleys on the engine.

As an alternative to the highly curved support arm, a nearly straight support arm can be held in place by the water pump bolt nearest to the alternator. Again there will be some offset between the alternator mounting ear and the support arm. This is how it is done on the Jeep engines with the stock Motorola and Prestolite alternators.

Using this type of adapter bracket and the 100-amp Delco alternators may present some difficulty with the alternator clearing the bottom of a large military-style oil filter (the cover on this filter says "military standard filter"). Using a street L fitting on the bottom of the filter canister and moving the filter up in the mounting brackets may provide enough clearance to accommodate the alternator. I did not have this problem because my engine uses a smaller oil filter that uses a Wix 51010 filter element. -- Eric Lawson

Thanks to Eric for a very useful guide. -- Derek Redmond