Hollis Wooldridge asked the CJ3B Bulletin Board viewers for some advice: "I drive my 6V stock '54 frequently but it has stranded me a couple of times with a low battery, which appears to be from the voltage regulator (it charges, but insufficiently to keep the battery up). Even though I drive it several times weekly, I can put in a fully charged battery and it will be discharged in one to two months. A local alternator shop will build an 8V alternator, which I'm told will help the battery, plus the lights will burn a bit brighter. In addition, I'd have no external regulator or problems charging at low RPM. I'd like to hear any opinions on this setup or should I try to keep fighting with the original style of regulator?"

Rus Curtis said: "When I first acquired my '54 3B, I had many charging problems with it. All told, I went through 6 batteries, 13 voltage regulators and 3 generators. I was frustrated and felt defeated since skilled mechanics couldn't seem to fix the problem. As a last resort I took it to a reputable alternator/starter shop. Initially, I took the generator in and asked if they could find a problem. None was found. They recommended I drop the vehicle off so they could check the whole system and they adjusted the contacts in the voltage regulator so that the correct limits were set allowing the generator to do its job. I had no further problems.

"The generator is actually responsible for charging the battery. The regulator is the gate, or switch, that breaks the charge circuit when the battery is fully charged and only allows a small amount through to keep the battery topped off. If it's not set correctly, your battery will drain, even if the generator is putting out plenty of charge. Keep in mind that you can get the same results if the generator isn't up to specs either! If you have the equipment, you can check both the output of the generator and the voltage rating of the regulator (not just a volt meter across the battery terminals). My suggestion for the easiest course of action is let a reputable shop do it that specializes in this. The total cost should be a fraction of what it would cost to build your alternator."

Ernie suggested: "If the generator is good, adjust the regulator to raise the voltage. I have had 6v systems with voltage above 8.3v and enough to keep an 8v battery going."

Hollis mentioned: "Someone told me today that if the starter is dragging a bit that it can drain the battery and the generator won't be able to compensate." 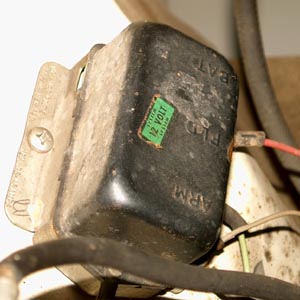 The 1953 Motor's Auto Repair Manual   says, "A generator regulator is designed for one purpose only and that is to regulate or control the charging rate in the generator-battery circuit. When a good battery is low, the regulator will automatically increase the charging rate until the battery becomes fully charged."

Underneath the cover of the little metal box mounted on the right fender under your CJ-3B's hood, are three units: a cut-out relay (otherwise known as a circuit breaker), a voltage regulator unit, and a current regulator unit.

Eric Lawson ran across the "Generator Regulators" section in this 1953 manual, which includes descriptions and troubleshooting information for Autolite and Delco generator charging systems (the types used in all Jeeps).

Eric says, "It's a very good description of diagnosing charging system problems. The only thing I can think to add is for the battery fully charged, generator output still high case. This condition causes lights to often burn out, maintenance free batteries to be 'wet' on their tops and 'regular' batteries to need water added more often than normal. If disconnecting the field wire at the regulator doesn't reduce the generator's charging output, try disconnecting this wire at the generator. If the charging output then drops off, this wire is shorted somewhere between the generator and regulator. If the output is still high, the generator is at fault."

Look at the full text and illustrations:


Thanks to Eric for the scans. -- Derek Redmond

See also Replacing a Generator with an Alternator, and other Tech Tips on CJ3B.info.